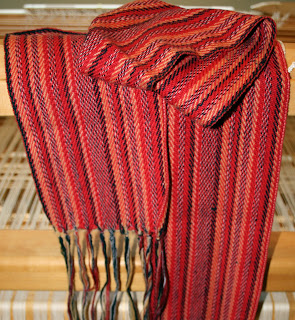 Please see additional post on Ceinture Fléchée here
Ceinture fléchée were sashes wore by French Canadian's to prevent the cold from penetrating beyond their coats and cloaks. Click on the links here to read the entire history. It is now part of the Québécois costume and also the Métis. Traditionally these sashes are hand manipulated weft twining, but later were woven on looms and known as arrow sashes. The traditional weft twined sashes are still being produced and a google search will locate them. With the 400 year Anniversary celebrations in Quebec this year (2009), I'm sure they are a hot item!

The pictures are of a woven arrow sash that is approx 30 years old. It's a blend of fine wools and some acrylics. The long fringe is approx 10-12 inches and a bit frayed and slightly felted as they cling to each other. Despite my carefully hand washing it and then a gentle iron, the edges still curl near the fells from use as a costume sash. I would say the yarns used are commercial as the spinning is too even and the weaving is a 2/2 twill. All the pattern is in the colour arrangements. 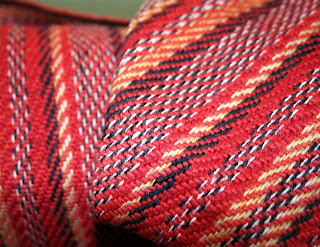 I found this sash at a local antique store when we were out discovering my town with our friend's Lynnette and Michael recently. I have since talked with the store owner and it seem that the consignee who brings these in, has a cottage in Quebec and brings back items to sell. They will give him my phone number when he comes back and I'll have an opportunity to talk with the gent and see if he can find me a traditional weft twined sash in his travels. He may well bring one back from this summer's holiday! Now, wouldn't that be nice? 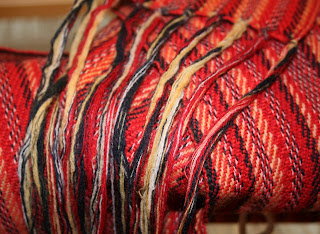 The sash is beautiful, and the story behind them is very interesting. Thanks for sharing!

I enjoyed reading about the sashes and as leigh said, it is beautiful!

Susan, how to you get the accent on top of your e's? I know there is a keyboard shortcut for this, but I have forgotten it. Thanks!

I couldn't figure it out myself so I did a cut and paste from a page with what I wanted.

We have the keyboard set to Canadian English and it will allow the accents as we are a bi-lingual country with interchangable words.
There must a be a list of the shortcuts at Microsoft if you do a search?

Here is a link to a page of keyboard shortcuts for special symbols:
http://home.earthlink.net/~awinkelried/keyboard_shortcuts.html

Or if you are working with a program that doesn't accept keyboard shortcuts, you can go here, type the letter you need and copy and paste it into your page. You can also use other languages here.