REDUX: The Magic of Linen

July 10th, 2021
I just learned today that Linda Heinrich passed away on June 26th, 2021.  Its a sad loss for her family, her weaving friends, and also her artist friends.
You can read her obituary here
Her book is once again out of print but always treasured by weaver with a love of linen.
Susan
Edit January 11th 2011:
A note from Linda Heinrich for readers in Europe and Britain:
Susan, My sincere thanks for the tremendous coverage you've paid to my reprinted book.

Interested Europeans may wish to know that Schiffer Books are distributed in Europe by: 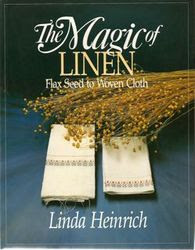 Does this book look familiar? Many of you might have this book on your bookshelf... or in your local guild library. Many newer weavers wish they could have their own copy of the now "out of print" book, and patiently wait to borrow one from their local library or guild. Some might ask another weaver who will hopefully entrust them with a much loved copy! This book quickly became the 'authority' for all things linen, covering the history of linen in many cultures,as well as the production, spinning, dyeing and weaving of linen.
"The Magic of Linen" came about as a result of Linda Heinrich's thesis for the Guild of Canadian Weavers Test Program. Linda successfully worked her way through the progressive levels through to her culmination, the Master Weaver certification. She completed this program in 1986 with her thesis: 'A Comprehensive Study of Flax and Linen' which eventually was published as The Magic of Linen.
There have only been 30 Master Weavers produced through this program since 1947 to 2003, so this is a most special distinction.
Master Weaver Jane Evans thesis 'Tied Latvian Weaves' (1985) became 'A Joy Forever', and Master Weaver Laura Fry (1997) wrote a thesis: "Transformations: Fulling Handwoven Fabrics" which became the popular 'Magic in the Water'....... and even Mary E. Black the first Master Weaver of The Guild of Canadian Weavers in 1955 turned her thesis on Tartans into the weavers' 'bible'... '"The Key To Weaving" and later "The New Key to Weaving".
During my tenure as president (2003 - 2007), I had the pleasure of meeting several Master Weavers and learning the history of the Guild of Canadian Weavers and its Master Weaver Certification Program. The Guild and it's programs span more than 60 years.
Linda has served as the Test Program Administrator and was part of the team that revised the test questions since their original inception in the late 1940's.

Linda Heinrich is a lovely lady and one I'm happy to call a friend. She lives in British Columbia's Okanagan Valley in the city of Kelowna. When I lived in the Valley we belonged to the same guild. I took advantage of a three day study course on the properties of, and weaving with linen, with Linda. I also participated in a weekly study group on linen where she generously shared her knowledge. All the information I learned from Linda is there in her book. It also contains a wonderful compendium to refer to when considering a project with linen; from sources and resources, to dyeing linen, right down to lovely projects and their drafts. I have seen the original textiles and they are as lovely as they are pictured!
For many years Linda was asked to consider more printings but this was not to be until now.
The following picture is one of the new colour images from the new book: 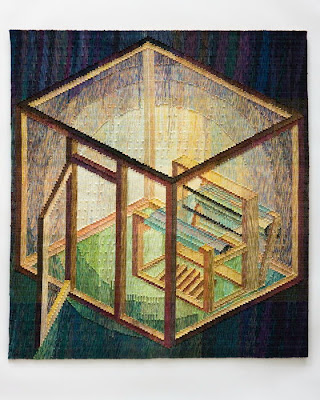 Linda says: "This beautiful tapestry (yes, that's a loom) was woven by Judith Poxson Fawkes, long time Portland, Oregon weaver of linen tapestries. Google to learn more about her and her book, WEAVING A CHRONICLE. This tapestry will introduce Chapter 8, Thoughts on Design, Weave Structures and Sett."
Linda may have contacted your guild regarding this new book revision through email using the various contact listings for guilds. This is how I became aware of the new release as I'm the librarian of our local guild. She and I have been in correspondence regarding the revisions and I have a list of the changes here to share with you.
Major changes that you'll find in the new edition of "The Magic of Linen" are, among others...
Linda wrote to me: "Thanks loads! I really appreciate your interest and support, Susan. Individuals will have to order the book through the book stores. Hopefully, there will be a whole new generation of "linen-interested" weavers."Unicorn Books will be one of the distributors and copies will appear at book stores near you or from on line from Amazon or Chapters. I know that I will be placing an order for a new copy!
So whether a newer weaver looking for a good resource on linen or an older weaver looking to update a well thumbed copy, we're all in for a treat!
You can help spread the news about this soon to be released revision by simply telling other weavers that its coming out in April, or send the link to this post to your newletter editors to share with others. Use this link here: http://weeverwoman.blogspot.com/2010/01/redux-magic-of-linen.html
I'll leave you with one more image from the newly revised "The Magic of Linen" and Linda says:

"Susan, this is an example of contemporary damask. A small photo is included at the end of Chapter 13, The Linen Industry Today. Maura Lamb of Irish Linen Stores, in Victoria, B.C. carries this popular and colorful French line. (Two new photographs of more traditional Irish damask cloths are included in the reprint.)" 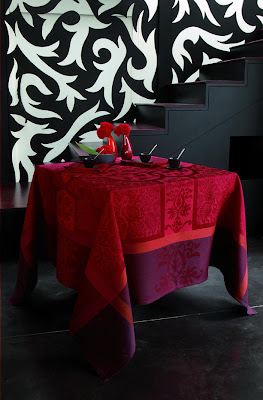 I thought I had collected the important books on linen weaving, now you come up with one I've never heard of before. Maybe the first publication of this book didn't get across the Atlantic. I do hope that someone will make sure this book gets distributed in Europe.

Susan - what a very interesting and informative post. I had heard of Linda but did not realise she was one of the few Master weavers.
More than 50 years of the programme and yet only 30 Masters, what a prestige qualification ! It is obviously a very challenging programme.
I am sure many people will arranging to buy the revised edition of Linda's book, the pictures look stunning.

Hi Dorothy,
That's a good point! While I can't guarantee anythng, I will forward your comment to Linda... who I'm sure will forward to the Publisher.

I think the issue will be distribution and maybe a company in the UK will pick it up.

Failing that, you could always purchase a copy on line and ship to you.

This looks like a very important and interesting book. And the tablecloth is just amazing!

thank you for the heads up on this book becoming available again. I'll definitely get it for my personal library and will check my guild library list to see if we have it - we have library money to spend and were asked to bring suggestions for new books to the meeting by March.

It's very exciting to see this wonderful book become available again to a whole new audience!

I searched high and low for years before a copy came my way....I was lucky enough to get an autographed copy to boot!

You've done a very informative post that really helps spread the word both about the Guild of Canadian Weavers Masters program and Linda's re-release....way to go!

Hello.
I think its a verry nice book.
You show us nice pictures from the book.

Hope your day is nice.
We have a cold wheater today. Minus 21 degres. And its snowing!
Its a funny world we live in.
Hugs Synnöve.

That tablecloth is amazing! I think we can buy this book in time in the Netherlands. We have a bookshop who specialices in special books (hihi)
I also noticed you became a follower of my blog, thank you kindly. I am honored someone so good at weaving to visit my blog.
Bye Bye.

Thank you for sharing this book! I will certainly love to add this to my weaving collection once it is available!

Thanks for the information, this book will be a definite 2010 purchase!

The table cloth is so beautiful!!!!!

Thanks for the scoop. Since I have that linen stash, I need this book!

(You'll remind us again in April I trust!)

I will forward this right now to my guild librarian. She's always looking for book suggestions.

Thanks so much for your suggestion to use fine yarn, even sewing thread for future hemstitching. I wasn't sure why the ends of my bookmarks were so bumpy because my hemstitching instructions were to use the weft. Thread would have done a nicer job though.

I'm lucky I didn't have to resort to a bonfire for that project, but I did do a burn test on that fiber to see if it would turn into a glob of goo or just into ash. Ash was the answer....so I'll file that tidbit away just in case!

Your kitchen reno has been a good influence on me, as you'll see in my blog tomorrow. We've been stalled literally for years on choosing a paint color. I finally got motivated this week! Thanks for the help!

Thanks very much for the updates and commentary/details. I was following them.