Have you ever bought an over the counter medicine and chuckled at the line on the back of the box that says:  "... and do not operate motor vehicles and large machinery..."  Well, apparently  the laughs on me as it seems I can't operate my loom!

I was not able to sit to weave in the past while, I thought I could at least wind a warp and dress the Louet and get her ready for my return. Some positive thinking at play here. Loading the Louet Spring was not hard to do and involved no serious bending of said cranky back.  First goof was at the warping board when I  apparently wound nine yards while have only planned on paper for six and a half.  It took a picture of my warping board and the green record tags in a previous post to discover that error. Okay, so its now three scarves and samples. Not a serious problem...

Here it is going on the loom. I just love the orderliness of it all. 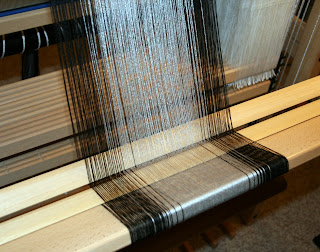 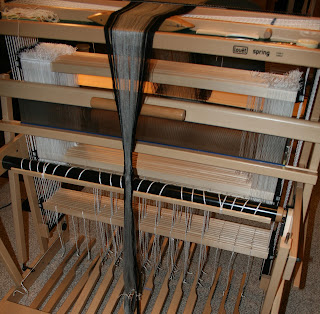 This is 10/2 tencel in black and silver. I am trying my first graduated colour warp using the Fibonacci method. I recorded this excerpt from a weaving discussion on line and can't recall the author, so my apologies:

So the warping went well and helped me to feel useful and somewhat productive. Next up came the threading which took longer to accomplish due to chair and the sitting issues. Since it was done so slowly, it had to be okay?  right? (don't get  too ahead of me now!)   Same slow progress with the sleying. I used a 12 dent reed and sleyed the 8.75" warp at 28 epi (sleyed 2,2,3)

The next part was the tie up and I knew this would be a problem. We got the loom up on the crates but even with it raised up higher, I couldn't sit on my low stool to do the 144 cords for the 12 shaft, 12 treadle pattern. So I must confess the loom stayed perched up there and gathered dust for awhile. Then last week I was feeling so much better and I started the tie up. I did one treadle and when I felt a twinge, I stopped and left it for another day.

So a few days later, I was back and carried on, all the time being careful to do one treadle and then stretch and move about. When I got to treadle ten and my sheet said I should be on treadle eleven now. Oh, crap!
I simply could not believe it.
When I had calmed down and then studied my chart I understood what I had done. I'm using 12 of 14 treadles, so left the far left and far right treadle are on the floor. Next, I had tied up the second treadle which we will now call number one for the pattern. I had moved my post it notes that I use to isolate the row I'm working on over to treadle two and had quit for the day. So when I came back a day or so later, I moved the post it notes over one more thinking that's where I had left off and carried on.  Happily, I had a relatively simple fix!  I unbuttoned the bottoms of the cords on the first tied up treadle and simply slid them left to the unused treadle, then tied up the former number one and turned it into the missing number two!
I felt so pleased with myself.

I tied the warp to the front apron, added my floating selvedges and threw my first few shots of waste yarn.  Then after playing with my new fancy smancy AVL winder and loading up some weft pirns, I got down to business and wove the border. Its a very complex pattern and Iooked hard but didn't see any glaring mistakes. I quit for the day and the next day after my physio I wove a full repeat and that's when I saw the mistake. The graduated stripes didn't land on the same shafts from one side to the other.   Hubby came in at this point and asked "why so glum chum?" I gladly accepted his offer of help and we dug in behind the beater and reed and examined the shaft numbers and sure enough, they were not the same. So I  un-wove the repeat, pull through the reed and raise a lease stick under the warp to keep order and we re-threaded all over again. Bruce called out the runs and I threaded. We did find one part where I had added one extra repeat of a small point twill (oops!) We thought that must be why the two sides didn't match so moved ahead now confident we had caught the culprit. It was our very first time working together like this in the studio and it was a pleasant time. We didn't bicker or anything!

Resley, tie on and a few runs..... and they still don't match.  That night I sat with the laptop computer on my couch and worked my PCW Fiberworks hard! I altered the Fibonacci sequence a bit but now the colours line up on the right shafts. So with new chart in hand we jointly rethreaded the loom and I resleyed  for the third time.

Yesterday I wove just one repeat and had to stop as the pain has returned to my thigh. But I will show you what I have so far. The colour changes are on the right shafts and there are no errors! 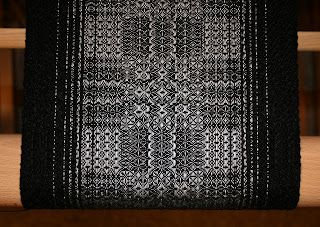 Here's the over all effect showing the colour gradation and of course the patterning. I hope you like it as I have three of them to weave slowly and after this I plan to weave table runners in the same pattern  and therefore getting more bang for my tie up time! It will be around for some time... 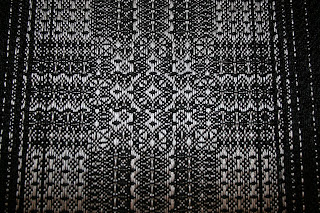 This picture is taken a bit closer... click to enlarge any of these. What I can't share with you is the hand this cloth has. There is a definite  textural feel to it. It is fully reversible and it has an elegant appearance. Gebrochene is known for this. This pattern is of mixed parentage and also features 'hind und under'. I'd be hard pressed  to tell you exactly how.  I have woven both gebrochene's and hind and under before separately. Hind und under can be a bit busy to my liking, but this I like. I found this pattern at handweaving.net when on a big search for some 12 shaft patterns for Dorothy and her new extra shafts.

﻿
So why so many silly mistakes? I like to think that maybe the pain medications I'm taking have me a bit more muddled than my normal state (and trust me, now after the big M, I get muddled!)﻿.  Don't worry I'm leaving the driving to hubby.
With so little happening in my studio right now I'm not certain what my next post will be about.....I will have to give that some serious thought!  Now there's a chore and a half!   :)
Posted by Susan at 2:15 PM

So sorry you're still "under the weather!" And, you're right, certain meds can do a number on you! But, your scarf is truly lovely...the color change and pattern are beautiful. How nice of Bruce to help you out!

Beautiful intreptation of the draft!

Against all odds, you have produced some amazing cloth! Just wait to see what you will be accomplishing when you feel 100%!

It looks fabulous - your effort and determination to co-ordinate the striping and pattern have really paid off. Hope the back continues to mend.

looks really great for someone weaving under the influence! Sure hope you can weave pain free soon.

That is so beautiful! I can rarely use the excuse of pain meds on my multiple warping mistakes, and have yet to do anything nearly as complicated as that. I love the idea of using the Fibonacci series for color change!

Wow, all mistakes and restarts aside, I am betting that you are happy you have the extra warp with such a beautiful pattern to weave. It's spectacular.
I do hope the back keeps improving. It's a long time to have that pain.

Susan, I learn so much every time I read your posts. This is really lovely. The Fibonacci has definitely given you a fading colour change that looks great.

And hooray for your new helper! My DH has recently started to show more interest in the things I'm weaving, and is always helpful with the mechanics.

I'm glad to see you're able to get back to the loom, even at a slower pace (and with some muddling - hey, I know exactly what you mean!)

So sorry for your continuing discomfort and all you went through to get this project started, but you persevered (more than I could say for myself under similar circumstances!) and had quality bonding time with you DH. Good on you!

Ahh, I feel your pain, but take is slowly and allow yourself time....easier said than done right?

Susan - what a beautiful pattern. I admire how you stick with a project and work out what you don't like and go about making the patterns work for you. This one "blows me out of the water". How wonderful you had help fixing up the treadling, hard enough to tie up the treadles, even without a sore back. Onwards and upwards, and take it easy - which you seem to be doing. You know when to listen to what your body is telling you, and you stop and rest.
I enjoy your postings so much, and learn so much. Thank you. Weaverly yours .. Barbara

This is a REALLY beautiful cloth! Your weaving, and your persistence, are always impressive.

I feel I live through the whole nightmare with you, as you describe the hardship on the way to this stunning project.It is beautiful.
I have used the fibonncci sequence quite a lot and it makes for a beautiful well balanced look. I get a bad case of shaft-envy, though, whenever I see these fantastic 12 shaft things you do