Drawing to a Conclusion 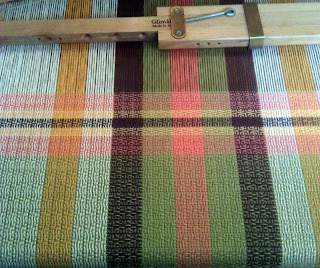 This was a pleasant weave after all was said and done, and not to mention the months to get it woven off! I used various colours from the warp to use as weft so my eleven or twelve yard warp yielded eleven towels!  I had planned on ten towels, but wove eleven so the last one, albeit a bit shorter than the others, was a bonus. I couldn't do coloured borders on this last one as I had no idea how far I could realistically weave it. I got four woven up with white weft, two in celery green, one in salmon pink, one in a pale yellow (not the darker yellow in the warp) and three in plum, all in 8/2 cottons. I would settle into my chair every afternoon and Calli took up her station next to the loom: 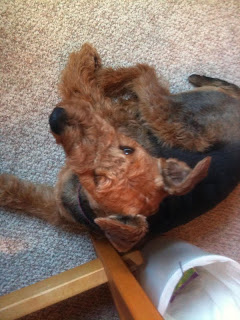 The new chair has been working out very well for me and the fact I can change the angle of the seat has made all the difference in the world. I was able to get a nice rhythm going even with moving a temple. Good music certainly helped as well. I've become a fan of Adele and her '21' album. I'm also getting smarter listening to podcasts from 'Stuff You Should Know'

I wove extra time on the day the knots came over the back beam. I find seeing those babies energizes you into action; a sprint to the finish line!  Calli can actually sleep with her head against the loom even with a regular 'thump, thump thump' ....she doesn't seem to mind the vibration. 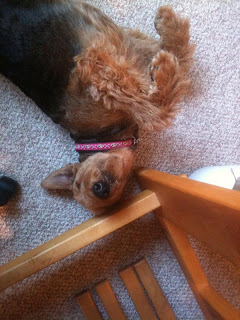 She only woke up when I stopped!  Well, I had to stop as this is how much warp was left. Talk about getting your monies worth.... 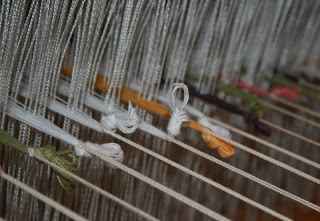 Once the cloth roll was off the loom, I had cleaned up the loom. Its a habit I do after every project and I put every thing back to the start ready for the next warp and get out the vacuum and thoroughly clean the loom and underneath. There is a lot of lint created by weaving and its not good to be breathing this stuff.  {in really linty projects I will even vacuum as I go along and keep the dust down} Since we may sell our place this summer, I've decided to leave this loom empty for now. If we do move, its a big chore to dismantle and keep everything organised. I know, I have moved it five times already! 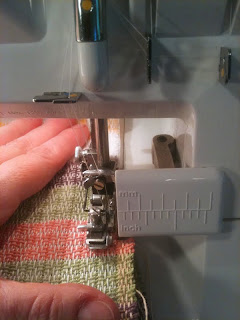 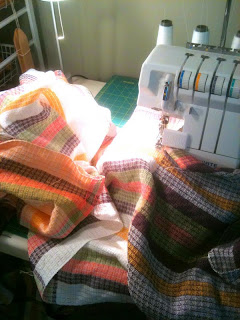 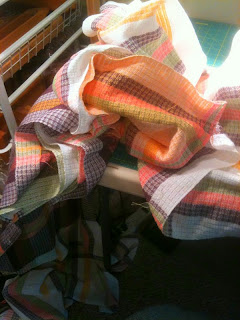 I like to use the serger to cut the towels apart and secure the edges. It's quick and the edge seems to be reasonably 'thin' for the want of a better word. A friend commented that using a zig zag stitch seems to bunch up the cloth and it can get lumpy. There is quite the lengthy load to separate!
Next step is to turn and press the hem allowances and this pattern is really neat as it has clearly defined lines in the pattern to guide you. I turned two rows of 'boxes' over and then  turn over two more again, press firmly and pin. The basic steps for my hand hemming can be found here.  I find I'm hand hemming more and more over machine stitching. One reason is that I'm not much of a sewer and so don't trust my abilities to keep a straight line! Secondly, if there are natural lines in the cloth and you do go off, it really shows! I prepped all ten towels (the pink weft towel had gone home with Lynnette!) I just worked my way through all twenty hems on the ten towels in about 4-5 evenings.

I dropped all the towels into the washing machine and just did a normal cycle, and then after snipping off all weft tails, they went into the dryer. The washing and drying tightens up the pattern into tidy little squares that are fully reversible, and thirsty for drying dishes! Our slightly abbreviated bonus towel was pressed into service right away. No pressing required. 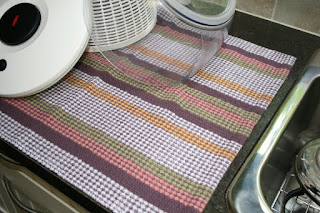 Click on the image to see the squares better: 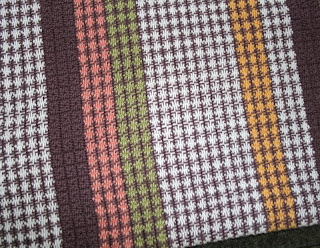 The squares really show up well where it's a solid colour. Next time, I might try this as a ten or twelve shaft project with 16/2 cottons and see how that turns out.

The other towels are destined for sales and so they are pressed and primped.... but ready for their close up!
Brief review: 8/2 cotton sett 24 epi,  25" wide in the 12 dent reed, 8 shaft straight draw and all pattern is in the tie up. Breaks and Recesses #47 in The Weaver's Book of 8-Shaft Patterns by Carol Strickler (Interweave Press). 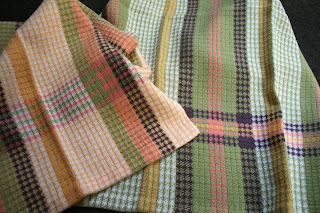 One in  soft yellow and two of the green. I like the greens... 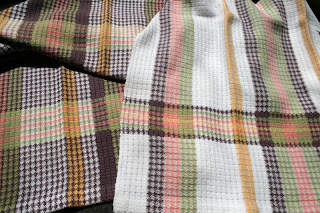 ...and three plums and then four in white.
And their close up's.... feel free to click and embiggen! 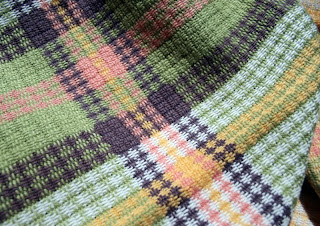 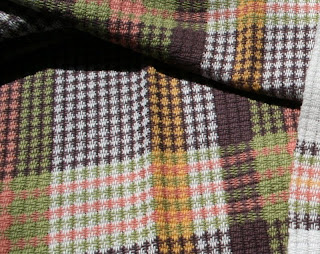 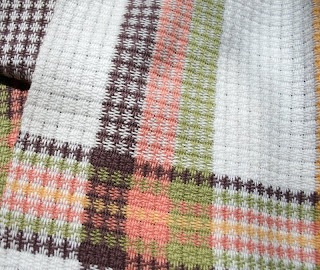 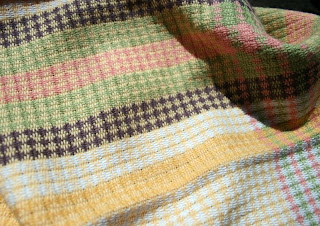 You can see the diamonds appearing where two colours meet and then very distinct squares where there is a solid colour. Nice hand to the cloth and soft. I'm pleased with how this turned out with the exception of how long it took to weave! There was one more colour, the salmon pink and that went home with Lynnette....
Here's another peak of that while it was under way on the loom. Its a neat colour as it has a decided yellow undertone and so works with the green , yellow and plum. 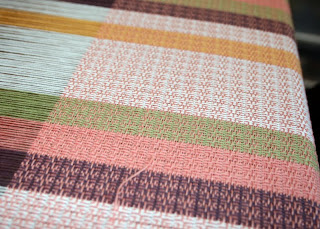 More conclusions: a scan has shown a large disc bulging and pressing on my S1 nerve. So that's what has been causing all my discomfort which has been minimal of late. I've been offered surgery as an option but I think I will leave that and keep it as a last option. So now my 'Back is Boss' and I must adjust my activities. I can still weave but  not as hard and heavy as in past times. I find frequent but short rest breaks make a huge difference to my day. So, I'll still be posting about what's on the loom but most likely at the same time span as its been for the last while.   Since this Woolhouse Tools loom is going inactive for the summer and we figure out if we're moving or not, the next project is under way on the Louet Spring, but that's for another post.
Posted by Susan at 6:22 PM

Beautiful towels! Such a color inspiration! I tend to be color challenged, so it is good for me to see these combinations and what they do.

Amazing results on the towels! I couldn't imagine the color play but they each turned out so beautifully! Glad you have named your pain-hoping you stay relatively pain free; just behave!

The towels are beautiful, don't you just love it when you get an extra bonus towel on a long warp.

Miss Callie looks to be the perfect weaving supervisor. She knows when you have have finished and it is time for her to wake up and inspect your work.

Knowing the problems associated with your back I am glad to see you are keeping a positive attitude and continuing to do the things you enjoy.

Looking forward to seeing what will be on your loom next. Think I might just use the pattern you just finished, I like the look of it and think it will be fun to weave.

hugs and pets to Callie and you!

Hi Susan - I love the towels, they look so fresh and summery and a lovely pattern.
Glad the chair is doing the business for you and helping to save that lower back of yours !

Wath a wonderful work! I like this beautiful pattern!

Beautiful palette in these towels. I love how the areas of squares vs. diamonds is different for each weft you used. It's one of my favorite patterns, and your interprtation is quite lovely.

DEEP END OF THE LOOM said...

Your towels turned out really great, I love the colors. I love your weaving supervisor, she too cute