Scratching the Surface Some More

I thought I would bring you up to date with our recent adventures in getting a new water source to our house!  They say that most people take water for granted until you have none. Well, we had some... a slow dribble that made day to day life awkward. Years ago we lived aboard a boat with limited water and electricity and so knew all about the 'one appliance rule' and fast, fast showers! Our hot water tank was a mere 6 gallons in size. So here we are living in a full sized house and we were back to our old boat day rules: No flushing while someone was in the shower! You don't get scalded, but the water disappears entirely until the toilet tank filled! No showers or laundry during the dinner hour as the water was needed in the kitchen for dinner preparation.  The dishwasher goes on at bedtime when there is no chance of water being needed anywhere else in the house.  Laundry day was more like laundry week!

So last time I wrote on details, we had had the well drilled and this is what it looked like when they were done: Yup, its a hole in the ground! A 182 foot hole in the ground to be exact.  Do you see the water around the base? The water would normally stay down at the level you find it at which in our case was 162 feet. We opted to drill another 20 feet and this would help serve as storage space. Well, imagine the surprise when they took the top off and the water was right to the top of the pipe, so 184 feet of storage! Then it started to dribble out as you see above.  The plumber Sven said we were darn lucky as this meant we would never actually draw on the acquifer and have plenty for our needs!   This sure sounded good but I was wondering how to get it to the house and out my taps? 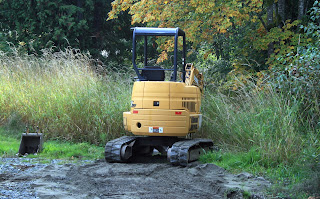 The caterpillar tracks helped on the slopes but it sure chewed up the driveway!

From the well positioned behind the garage you come out to the front of the garage, where you dig up and break the existing irrigation line for the dug well (which was repaired and reburied)..... then start marching up the road.... 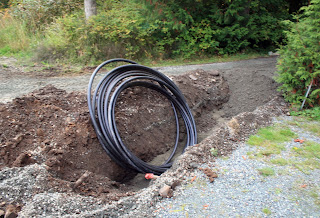 Up the drive and across the bridge, where near the tree you find an old culvert bringing water from the neighbour's property under your driveway and onto your land. This was 'fixed' ... enough said on that.  :) 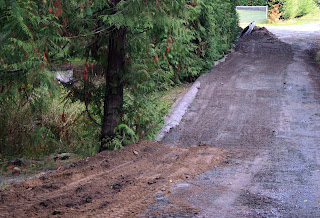 Then beside the drive where you deal with big tree roots 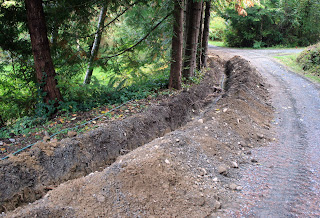 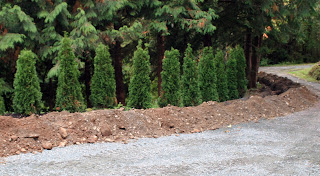 Then you hope your  line of new cedars haven't spread out their new roots too far yet! 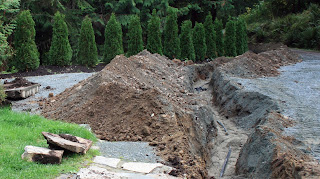 Why stop there?   Let's go through the path and even the garden! Here they placed a junction box (see green box waiting) where they changed the type of pipe and its diameter. 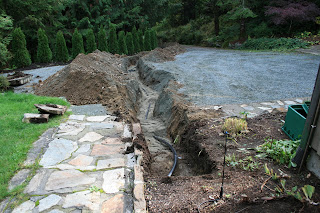 Ultimately they drilled a hole right through the foundation and then pulled pipe through under the house which they accessed via the crawl space. Yes, it was a #%^&@% mess!  They covered it all up again but the ground is subsiding as the dirt compacts down and its not the nice (relatively clean) crushed blue granite you can see we had down.  A muddy mess which will most likely have to wait till spring to fix as winter is upon us!
While the men were working up by the house, I heard a little yipping noise and someone told Calli to be quiet.  Since Calli was lying beside me as I wove, so it wasn't her!  I got up to check and this is what I found! 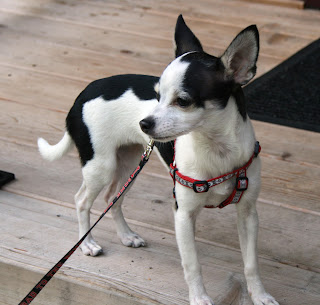 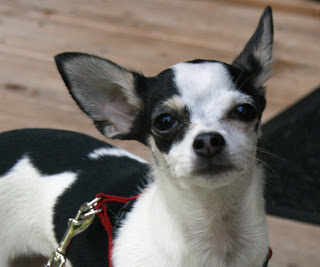 This is Cali (short for Mexicali?) the Chihuahua!  One of the big tough guys had brought his little dog along and she was COLD ! I offered to bring her in and warm her up but her 'Dad' just tucked her into his coat and zipped it up.  No more yipping!
We had the well drilled right beside the garage so there was electricity near by and the well components can be mounted safely in the garage  and we wouldn't have to build a pump house. (These pictures were taken with a mobile phone so not entirely clear.) 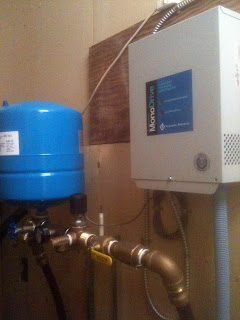 This shows the main black water pipe coming in from the well and a pressure tank above. Next to it is the 'brains' for the pump which sits down at 172 feet in the well. It is set up to provide a constant pressure or PSI.
Here's the gauge:   (I can almost feel the full pressure showers now!)

So apparently getting the pump down the well is a task all unto itself! It has to be somehow suspended and sanitized and without touching anything settled down into the well which has also been sterilized. (You have always wondered about stuff like this right?) 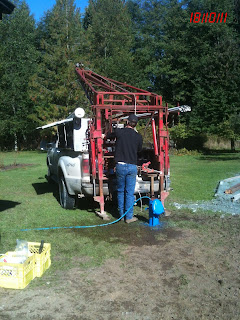 Here Sven has a special derrick truck to lift the pump into the air. Meanwhile the well has been painted a bright blue so you miss it with the mowing tractor! There is some testing or cleaning going on right now. 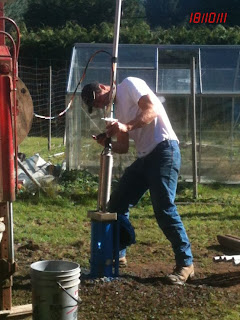 Here's the submersible pump being readied for lowering down the well. Once this was completed, we had to 'develop the well' for a couple of weeks. This meant twice a day we hooked a garden hose onto the pipe fitting that comes up through the floor in the laundry room and run water from the new well for 20 to 30 minutes a time. This flushed out any fine sediment and debris that was created by the drilling.   This was a long two weeks and it evolved into three weeks with various delays. Next up is the final hook up to the existing water treatment system in the house and the cutting off and capping of the old well pipe.
In our laundry room what you see from the new well system is the pipe that runs under the house and then appears up from the floor, tucked in behind the hot water tank: 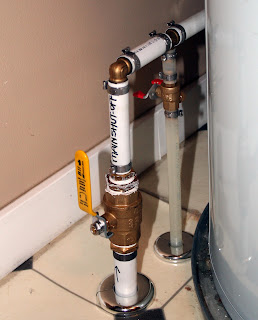 The lighter coloured small pipe takes water off to an outdoor hose bib ahead of the treatment system. The main water then goes to a treatment system that softens, filters and irradiates the water with UV light. Now its safe to drink and bath in! 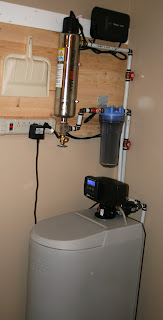 So I did! This shower is the highest water appliance in the house and it was quite pathetic what we had before. Not any more! 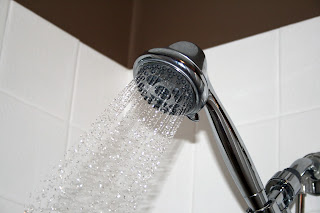 ....and for good measure I ran the vanity tap too! 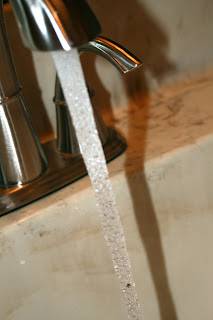 There was no fluctuation in the water volume!  So that's all settled now and  we must eventually repair/ patch the driveway, then replant the garden come spring and make it so it doesn't look like the garden gnomes went bonkers!
Well, after an early winter storm that rolled through here yesterday, it all looks chaotic! We had some very high wind gusts out of the south east and in one to three gusts, the wind cleared off the maple and alders and the air was *full* of flying leaves, branches and other debris! I managed to sweep off all the decks and I literally needed a shovel to lift it all.  The power outage lasted 3 1/2 hours so not too bad for the first storm. The gutters on the house seriously need a cleaning now!
Apart from a small interior decorating job that we plan to start tackling in January 2012, that's it for reno's for the year! I've started my Christmas baking and writing cards....
Posted by Susan at 12:01 AM

Oh my getting water to the house is/was/seems it will always be/ one of the worst jobs. Someone in town had the same thing done. The work there too is quite easy to recognize and what is obviously another uphill battle. We have a whole "pump house" over the well head. Enjoy those showers though!

Wow, the new water system must be wonderful; the lawn, etc, will be all recovered in the Spring!

What a mixed blessing....finally having a good water supply vs. the awful mess they've been making of your carefully tended yard :(. Thank goodness it is finally finished! Enjoy the baking and Christmas preparations!

That's quite a project! Isn't technology amazing though? It's a far cry from the kind of well our ancestors used... thank goodness :-)

Glad to know that you have good, consistent water at the house. It makes a huge difference in the quality of life!

This all looks earily familiar. No offence, but glad it is you this time and not me! I'm still getting the holes in the ground leveled after settling.

What a relieve it must be that water problems are behind you now! But it took quite something to get it.

Thanks for getting all the photos of the water installation! I didn't want to watch, knowing that I was going to have find a way to fill all the holes and patch up the yard.

Oh well, as you say...we now have our own water and don't have to beg the neighbor to fix "his" system so that we could have some water.

And, I don't have to worry that you'll be scalded or, worse still, you'll run out of water in the shower when I turn on a tap in the kitchen. Yayyyy!!!

HEY-THERE-SUSAN !!!!!!!!!! Just now checked-in here and have a water-supply-tale of our own. Last winter we spent 6 weeks in CA W/ bro & family and got a call from daughter @ home telling of our city water service being turned off by them due to a possible-leak. She had gotten their monthly bill for 280,000 gal in the amount of $ 1,820 , wanting to know if she should pay it within the 10-day limit in order to not pay a $ 250 penalty.

Well, looks like all of your water problems have been totally washed out, since you have a new well for your home. I'm sure that, come next spring, your garden would be blooming because you'll have enough water to keep them lively and green!