About a month before our trip away, I got the bright idea of making up some guest towels to have handy as hostess gifts. I really liked the runners I wove up a year ago and had fun playing around with treadling variations I had woven up as book marks. 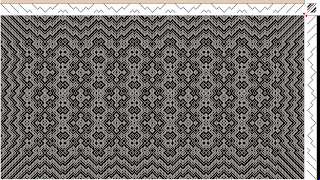 So I wound a warp of 10/2 mercerised cotton from Louet's yarn  for a dozen towels (yeah, I know, that's a lot of 'quickie' towels...)  My sett was 28 epi.  Bruce helped me beam the warp and I found I was short three ends. I double and triple checked and I was really three short.  So out came the weighted canisters and my handy dandy little separator. Why are there four? (five really) as two are floating selvedges... 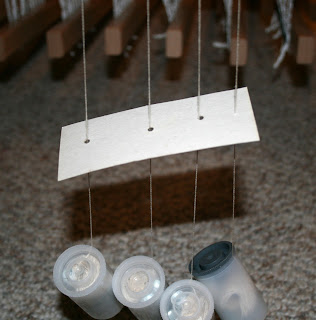 The weaving was straightforward and fun. The hemstitching slowed me down some. I decided to use bamboo as my weft and I quickly went through the colours and  yarn I had on hand. I had to visit a LYS in Victoria and buy some new bamboo colours! 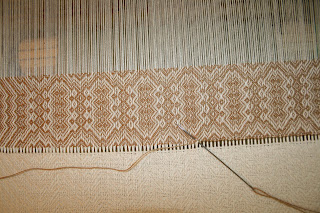 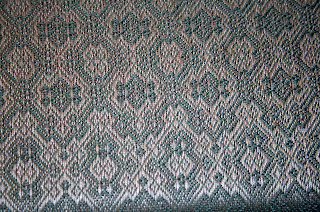 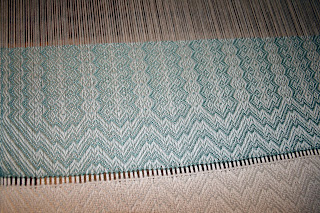 I then has some issues with my left knee / right foot and so things came to a halt for a week and more. Next thing I knew, it was time to pack for the trip and so I decided to take in stock kitchen towels as gifts. I also took bottles of wine grown and produced locally here in the Cowichan Valley. A bit cheeky given the Okanagan Valley and Shuswap regions are major wine producers in their own right.

After we got home and caught up on errands and Life, I picked up where I left off and carried on and finally a full cloth roll of twelve towels and some samples came off the loom. I got a BIG surprise when the brown paper roll finally dropped to the floor. Take a look at this! 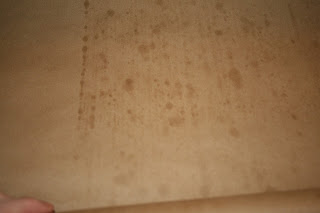 This was a brand new roll of heavy brown paper and you can see a clear line on the left side.  It would seem the yarn was full of spinning oils! I have never see anything like this before. I knew they use a fine oil and sometimes even a wax when spinning the fibres up but my paper or sticks have never been stained like this.

I like hand hemming and so the twenty four hems took me about three or four evenings to get done. I did my usual hidden running stitch. You can see how I do this here

They were soaked a long time in hot sudsy water to get rid of the oils and then  laundered as per usual and hung out side on my clothes rack to dry. I gave them a hard pressing.  I think they turned out great, even if they are late arriving at the finish line. 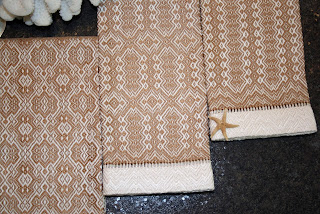 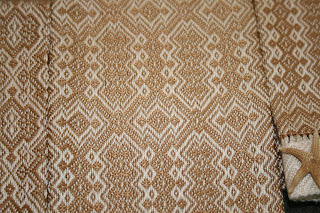 There were three different versions with bronze and cream. Hems were woven with cream bamboo as well. 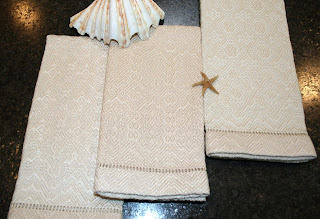 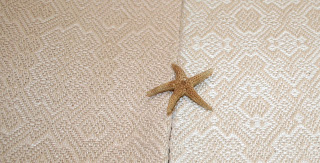 There were two woven with white weft against the cream warp and one guest towel was woven up all in cream. They look much prettier in person than here.... really nice sheen to the fabric. 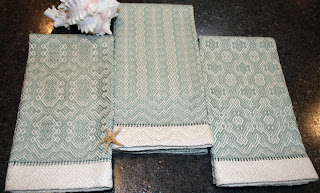 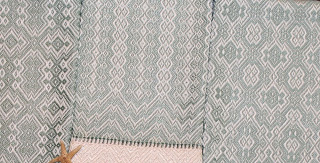 I also used this pretty teal bamboo weft, again with treadling variations. I found the softer colours looked nicer against the beige cream. I tried some darker colours (navy and blue red) but kept to my first choices. 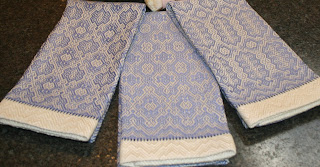 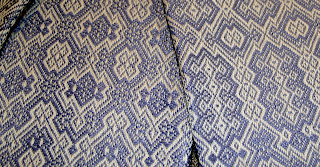 One of the new colours I bought, periwinkle blue, is my personal favourite. Its almost a Wedgewood blue. They are all varying sizes in length depending on where I was in the treadling scheme as some would be to short, so I add one more repeat and then they would go over. They measure (roughly) 12" x 16" - 18".
So they may not have made it in time for the hostess gifts but they will be great to have on hand for the coming Christmas sales (yes, I really wrote *that* word).

I have to chuckle at the response to weaving these up. "Oh, I would never wipe my hands on those" but everyone  who comes to my house get a small regular store bought guest towel to use by the sink. Its a real dilemma for my guests. A common hand towel in a weaver's home?   But if I put a hand woven one there, no one touches it...   Its enough to make you go for therapy.... but its cheaper and more fun to weave instead.

Make a weaver happy and use a gift as it was intended when they made it.   They will be thrilled!   :)
Posted by Susan at 12:00 AM

The towels are beautiful!!

I love your separator idea for those film canisters hanging off the back of the loom.

I've never seen that much spinning oil either - wow.

I've just found your blog and am now ooohing and aaahing over all the pictures of your work. PLUS, it's YOUR fault I now have 12-shaft envy!

The towels are stunning! I've never seen that much oil either, and I machine knit quite a lot (machine knitting yarns are often heavily waxed).
The separator is a brilliant idea, I've had much trouble lately with extra threads getting tangled at the back of the loom.

Lovely towels, will make great gifts and a change from tea towels ! Think I like the paler shades the best but they are all beautiful.
That was a big project and the hem stitching would last for ever !!
D

Susan...you've done it again. These are simply gorgeous! I love *all* of the color versions...I don't think I could choose a favorite. They are certainly worth the wait and time that it took to complete them. Bravo yet again!

Those towels are beautiful! You can come visit me in Arizona and I would happily take and use a towel! I love your separator, I've heard of weavers using plastic mesh canvas, but I don't have that on hand.

The towels are beautiful!! I really like to hemstitch on the loom.
I have never seen that much spinning oil. For it to stain the paper?

Susan, the towels are perfect with each just a bit different than the last. No worries if I come for a visit I would be happy to use your handwovens ;-)

your towels are gorgeous. I have a small towel bar with all handwovens, some very old (from charity shops etc.) student and guild work. they hang untouched until the grandchildren come and then they love to use them

The hand towels are gorgeous. I love the soft colours and your attention to detail is apparent. Beautifully finished and presented as usual!