There have been some glorious days here!  The grass is growing three inches a day (okay two ... at least!)  Trees are leafing out and spring flowers  are in full force.

Perfect conditions for a..... Road trip!  (okay... its just one day but still fun!)  This map is neat as it will show you the island and just how large it is. 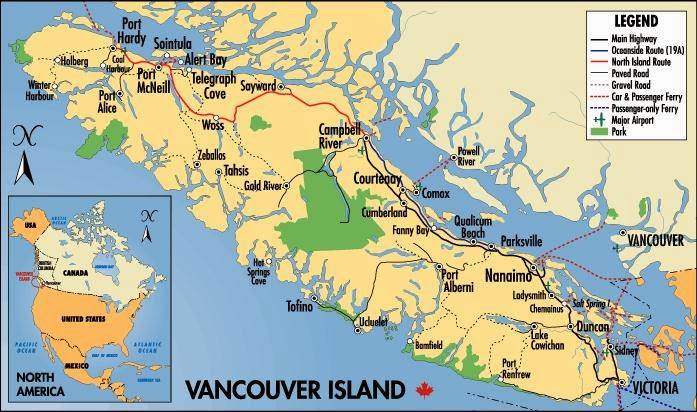 We headed north and enjoyed our ride in the sunshine on our way to visit Dust Bunnies Under My Loom: Lynnette and family.  Using the map above we are driving from Duncan and up to Comox about 2-2 1/2 hours drive north of us. (that's driving at speeds of 110 km's most of the way too.) As you can see that's still only half way up the island with lots more to see another time.  It's a very pretty place with views of snow capped mountains on the island and across on the mainland.

Comox, with the Island's mountains.

Lets face it: Vancouver Island is a pretty darn nice place to live in the World!

Then there's the sea and wonderful beaches.   It is also home to a Canadian Airforce Base and Canada's finest Snowbirds Demonstration Team . I could see them doing fly pasts in close formation through their house windows while we sat and caught up on news! Nice to have a display put on for our visit! 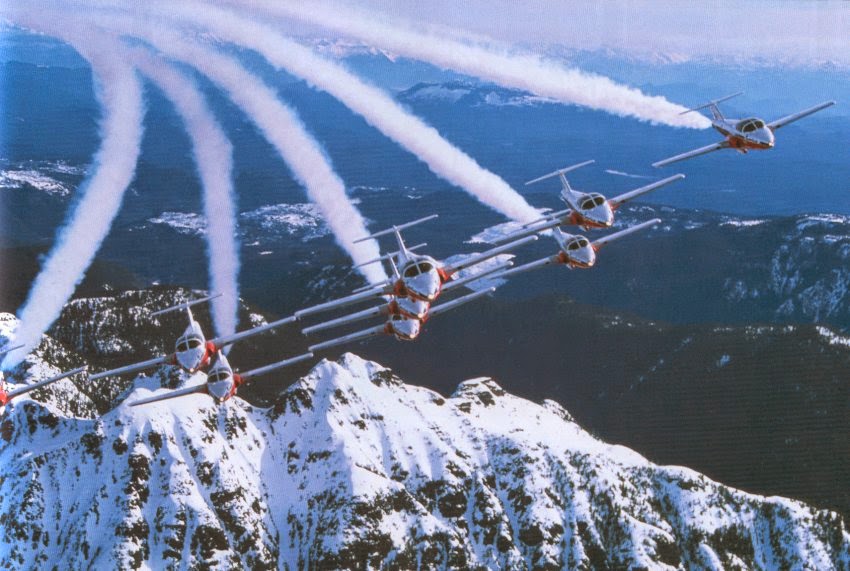 I got to see both Lynnette and Ngaire's latest projects on the loom.  I'll leave it to Ngaire to share her latest project but I will say its lovely!   Lynnette's Lynch family tartan is going to be spectacular once completed.  I can attest to all their garden work as their yard is in prime shape with lots of early colour and much more to come.

There was a delightful lunch and wicked pavlova dessert. I haven't had that since 1974 in NZ!  There was even passionfruit drizzle over the whipped cream too. I was in heaven!

We sat with tea and chatted about the New Zealand trip and how much things have changed since I used to live there many, many years ago.  There was even a small cake of lovely merino possum yarn from Dianne for me! What a lovely surprise... thank you Dianne!

Then, it was time to go.... the time had simply flown by!

One nifty thing that came from our chat together is that we three amigos are going to a two day retreat in Powell River, BC in March 2015 together!  Two happy days of all fibre talk, spinning weaving, food, jammie parties and plain out right FUN!

I do have some weaving to show you...

I have voluntarily reduced the load on my knee while weaving and will be doing only eight shaft patterns (or less) from now on. So with this in mind I chose a favourite Drall draft and then decided to do something different with it. 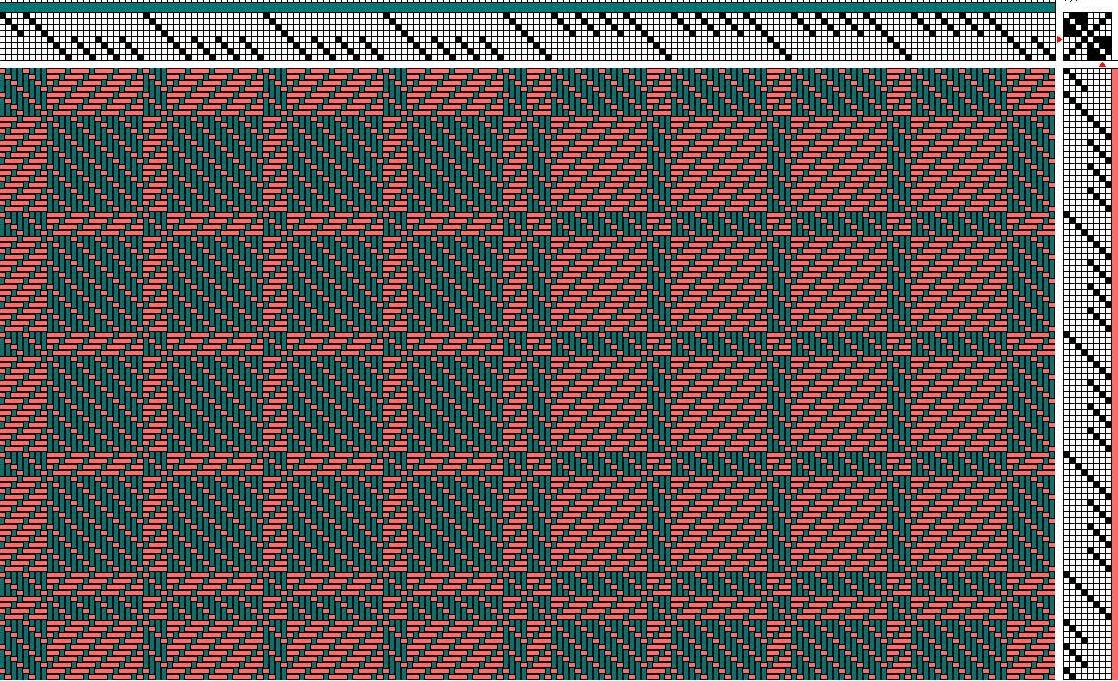 I have some 8/2  painted tencel warps and so I wound a scarf warp so that the 'windows' would be the painted warp and the bars in between would be a solid colour tencel. The variegated warp has magenta, plums, blues, a touch of green and bright turquoise. I chose magenta for the 'bars'. The sett is 24 epi. 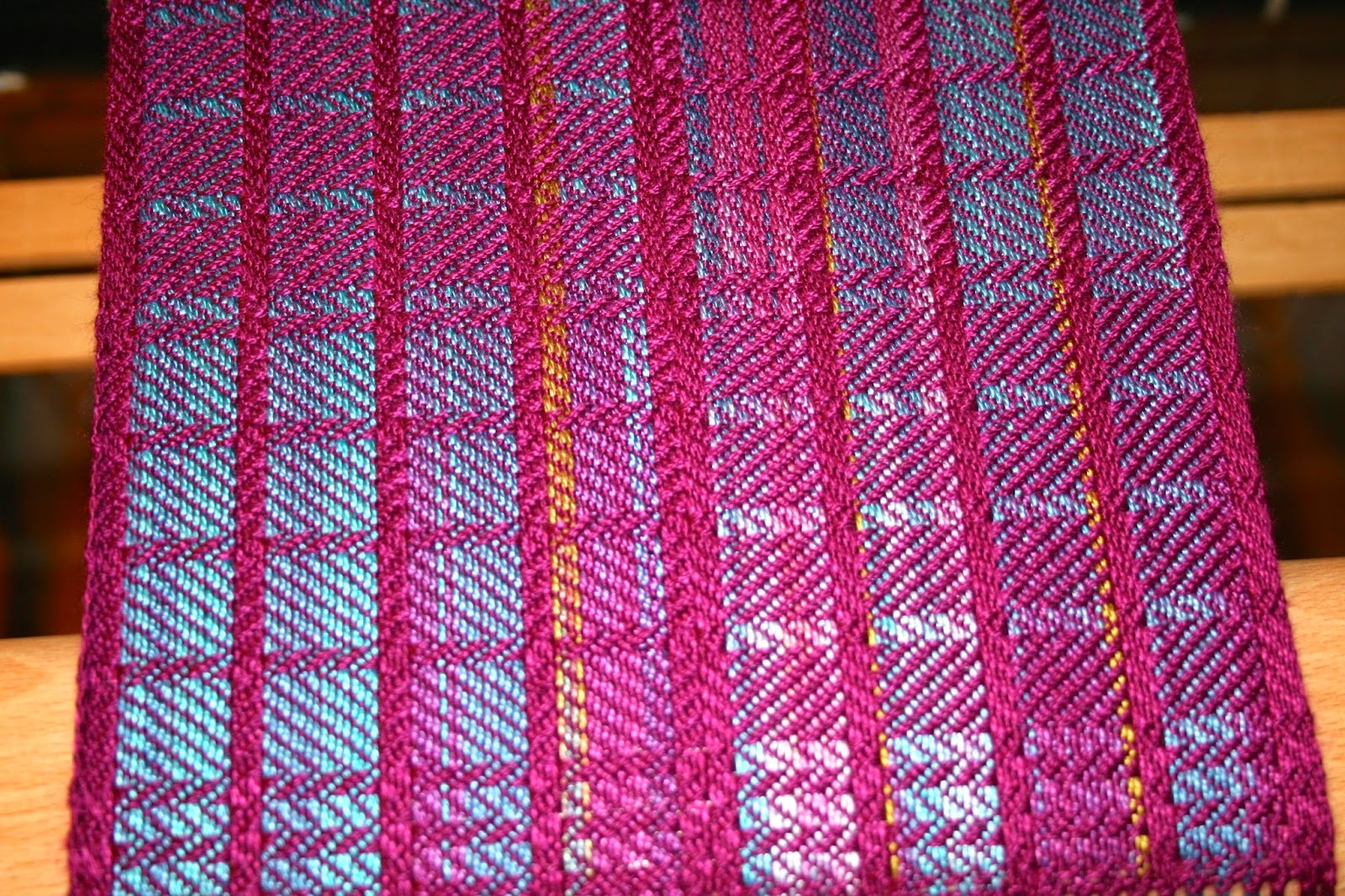 The first scarf went along quite nicely. Not a complicated treadling and I used magenta to complete my windows.  Then I started wondering what to use for the second scarf?   Turquoise and some of the blues just didn't work.... and so finally I settled on eggplant. 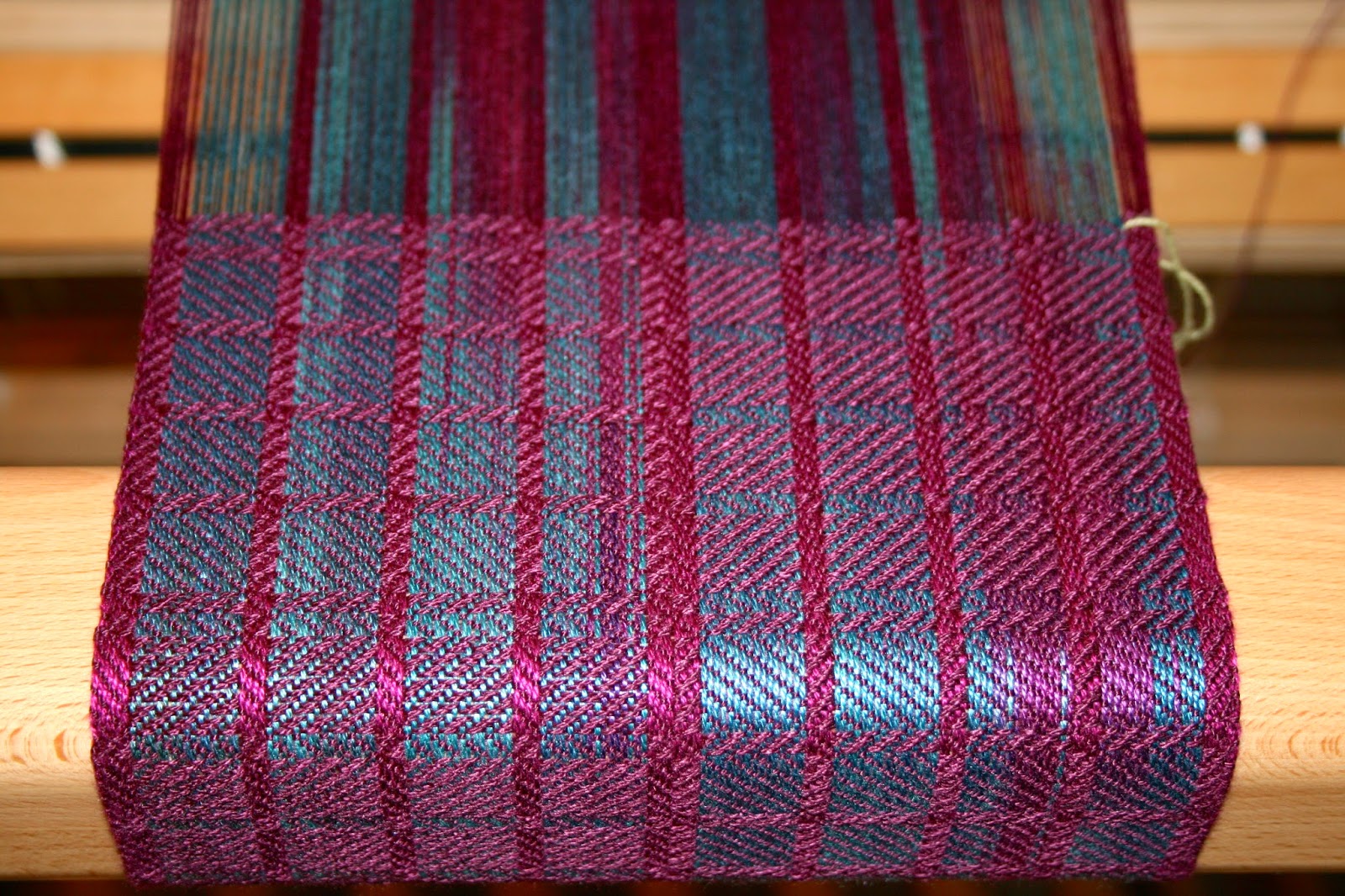 The darker weft really popped the other colours!  Its my favourite of the  two on this five yard warp and I found I was wishing I had thought of it sooner.

So I steadily wove away a bit each day and next thing I was twisting fringes and wet finishing as per usual.  No beads on these as they are busy enough...   The sheen and drape is just lovely. 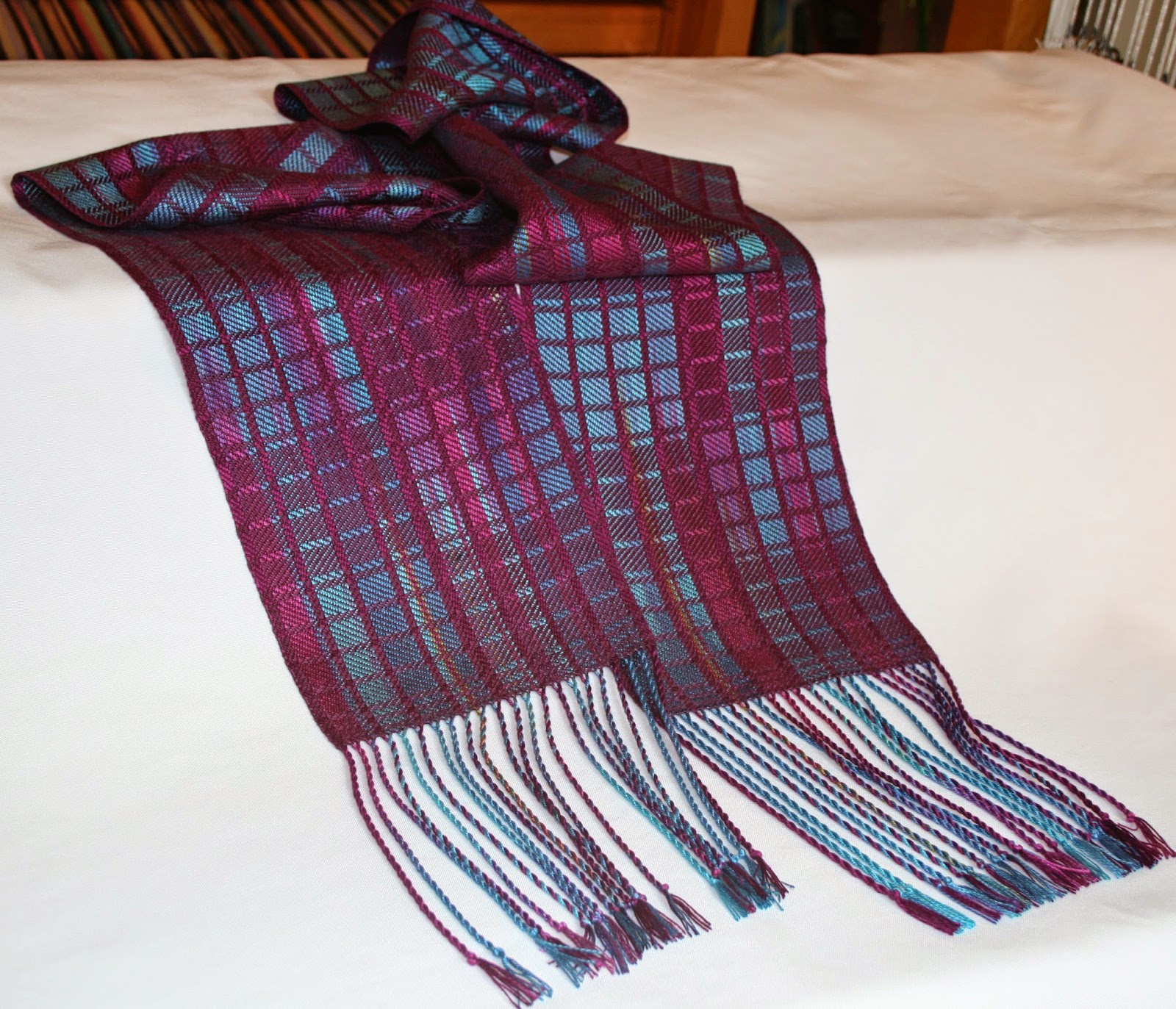 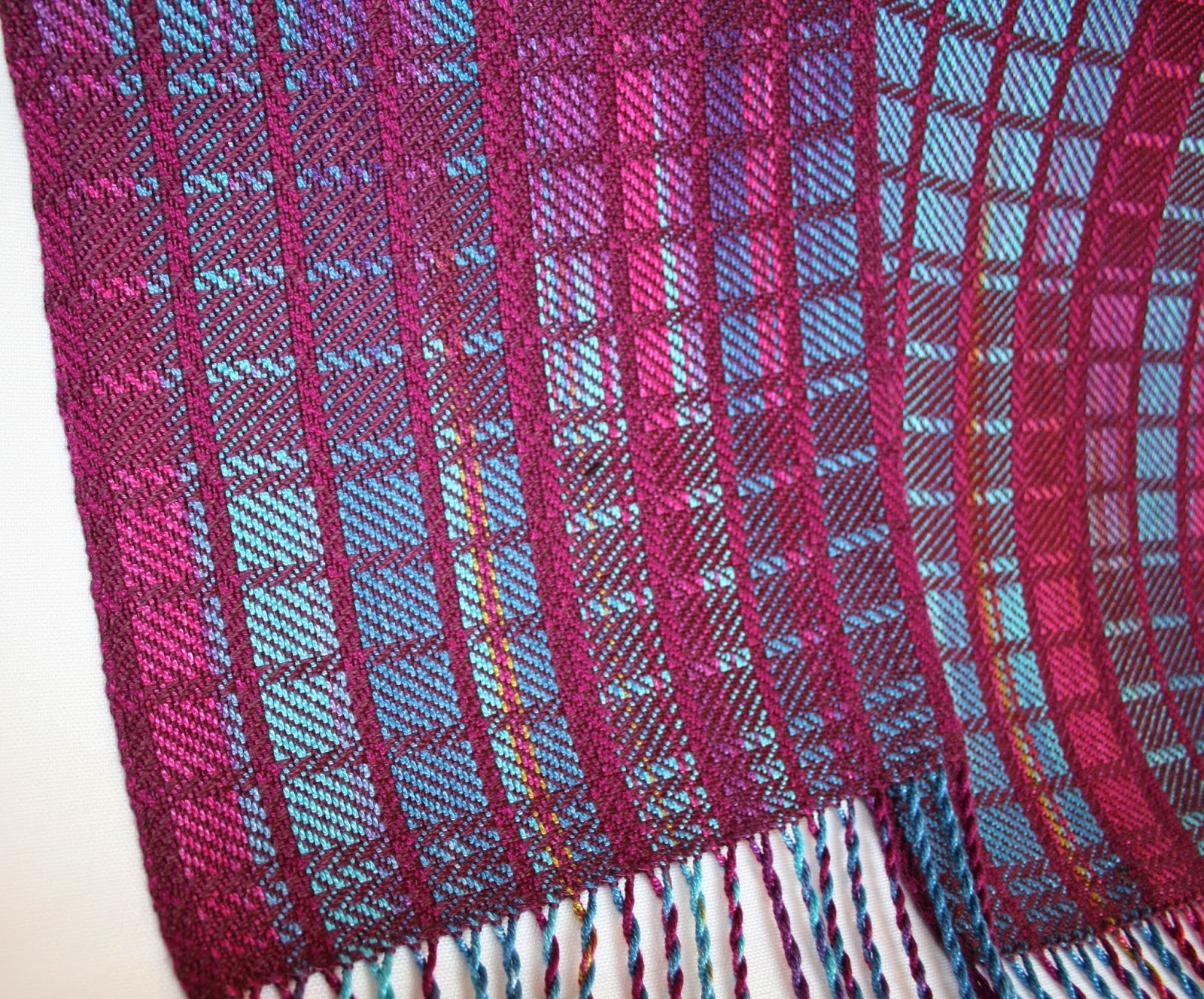 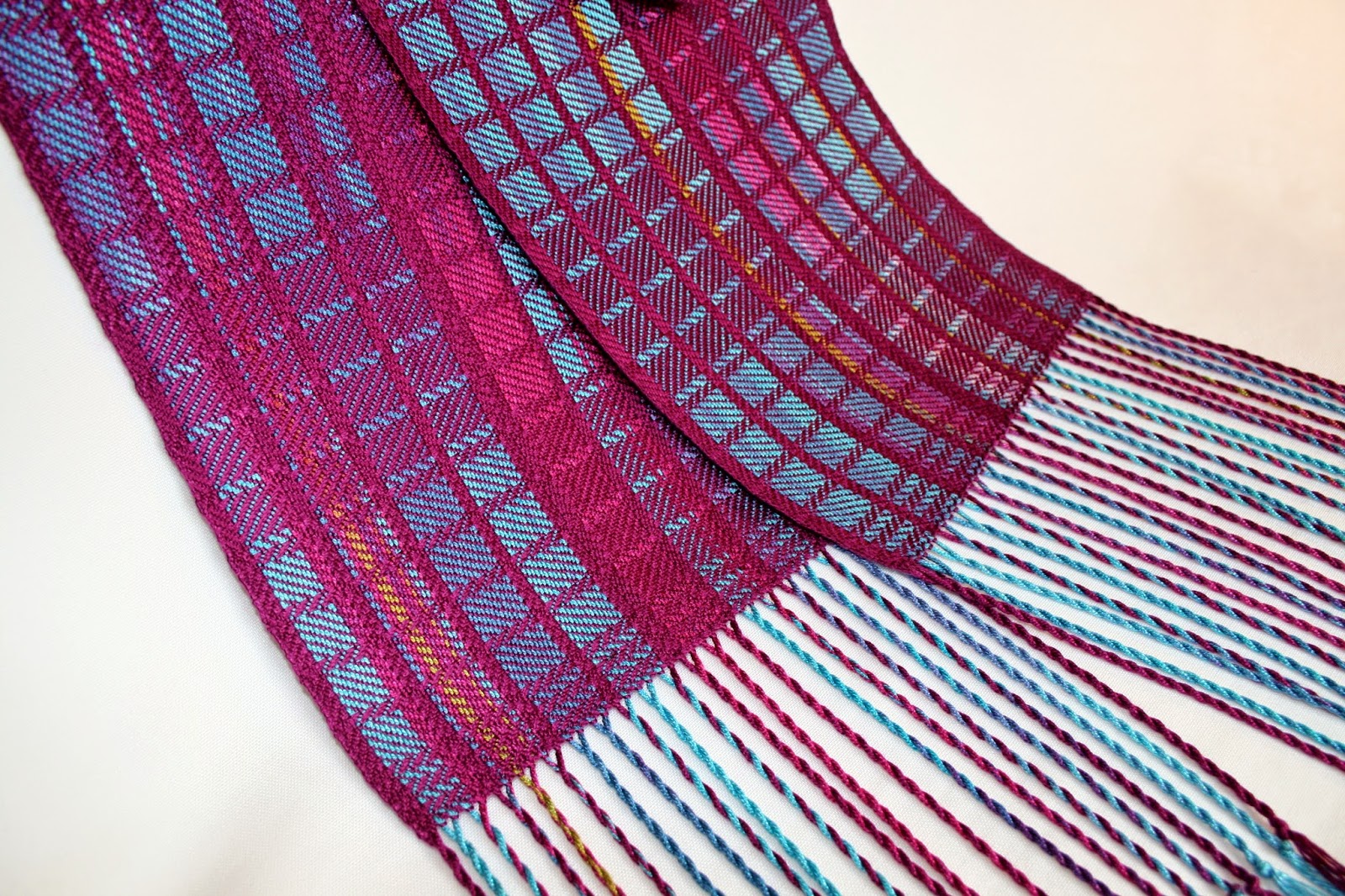 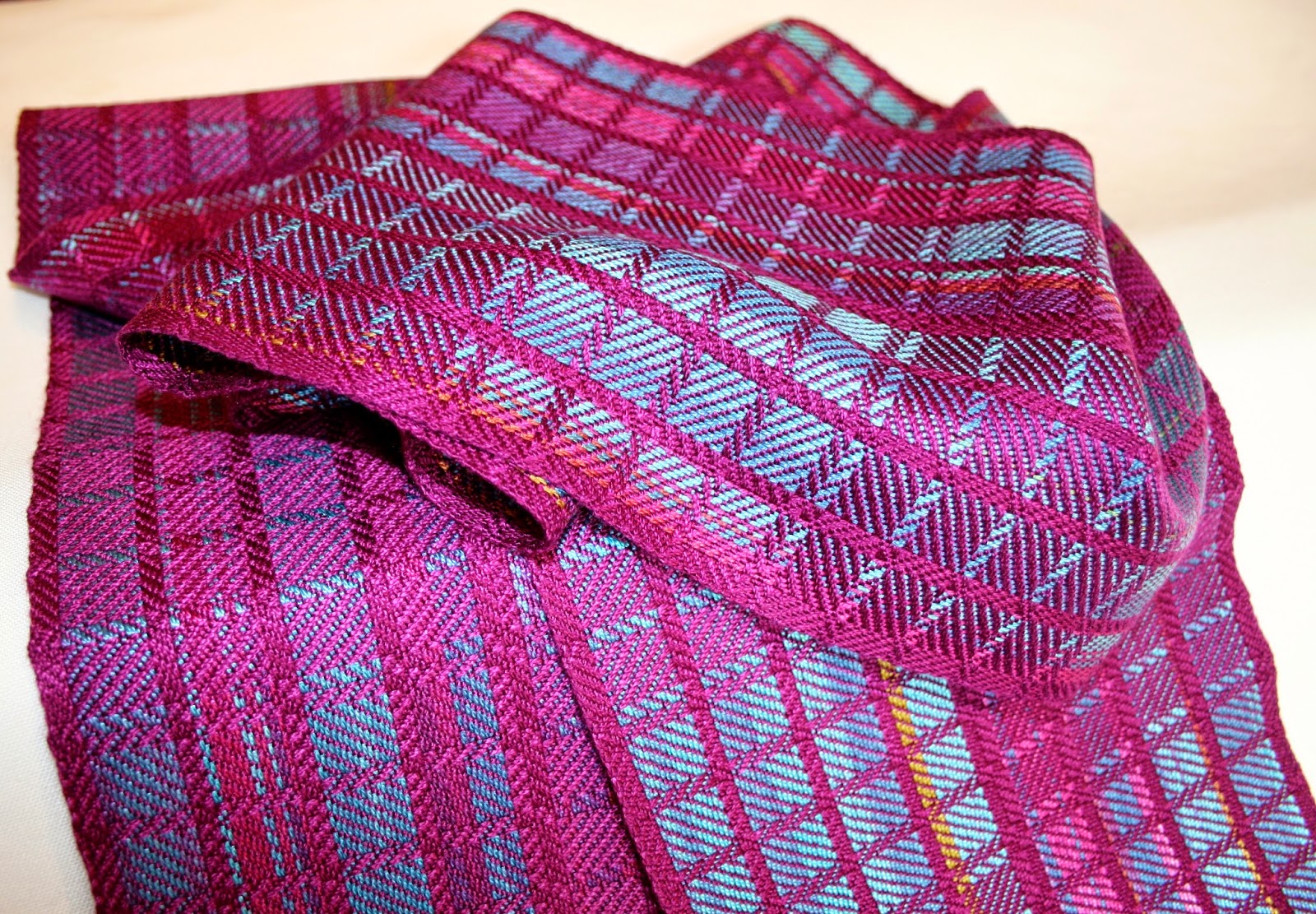 There is another warp on the Louet already and I'm using the same tie up again.  So I'll be plodding away on that for now. 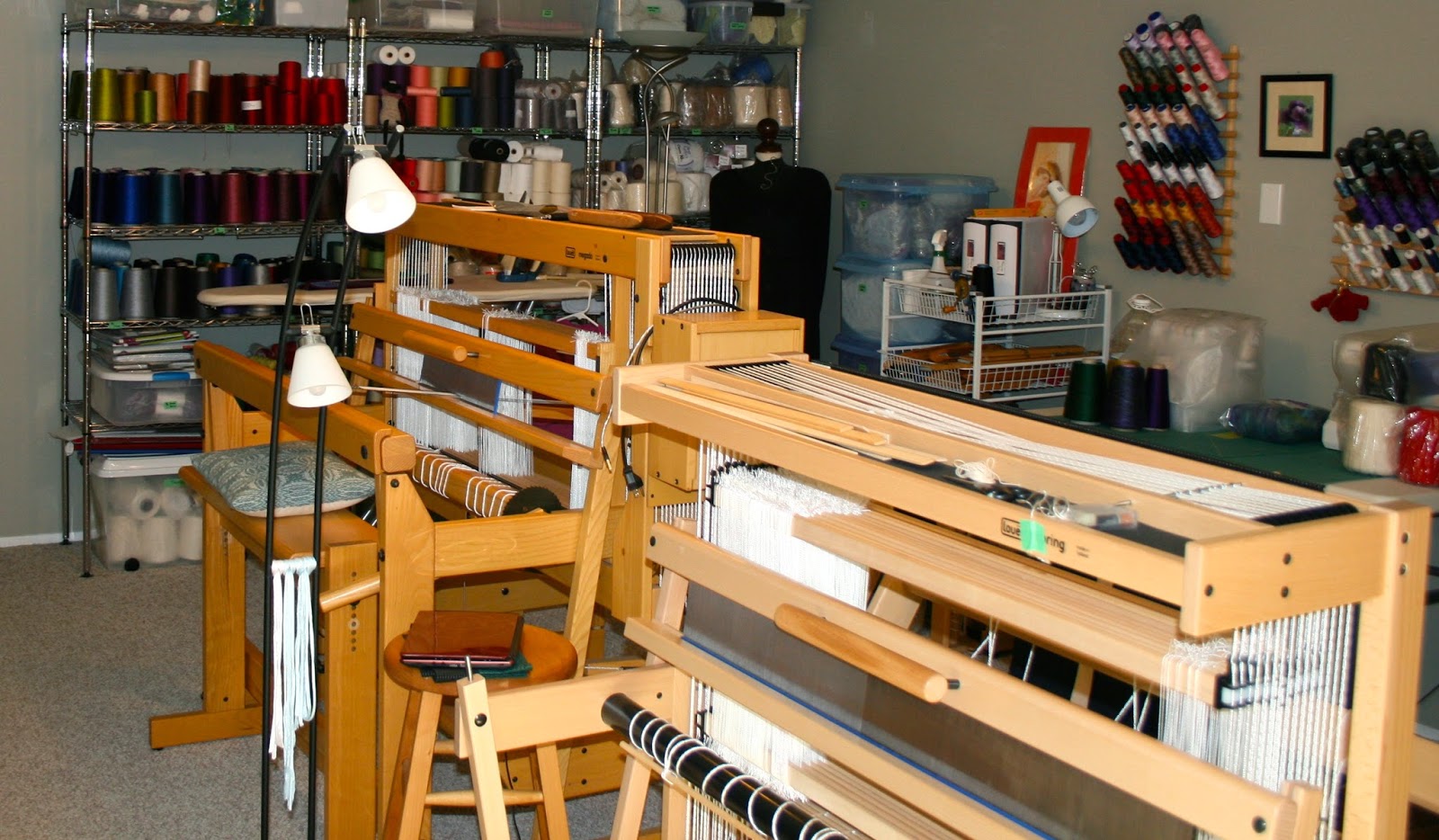 Stunning scarf - I love using that type of draft (although mine have looked much different) with painted warps.

Hi Susan, I have been to Vancouver for Convergence years ago, but not the island. Beautiful scenery, and mountains. Wow. Your weaving is stunning and I adore your studio. I have nothing like that. Anyway, glad I found you. Thanks. Helen Hart helzhart@aol.com

Thank you Susan for posting all these wonderful, interesting things on your blog. When i'm not weaving I just love to see what you are up to. Inspireing as always, Bridget

Your drall scarves are stunning as usual! Your colour choices are so much fun and they looks wonderful in the photos ~ so I know they are even more lovely in person.
Thanks so much for coming to Comox for a visit and thanks for posting such great photos of our beautiful valley....the Snowbirds were just a little bonus!

Well, blogger dashboard let me down and I missed this post. I was looking for your tutorial on tasselling.
You're very welcome. Since Lynette was here I've learnt that the composition is 65%merino, 25%possum and 10% silk. I'll be trying it soon as a weft.