The snowflake twill warp is now off the loom and complete. 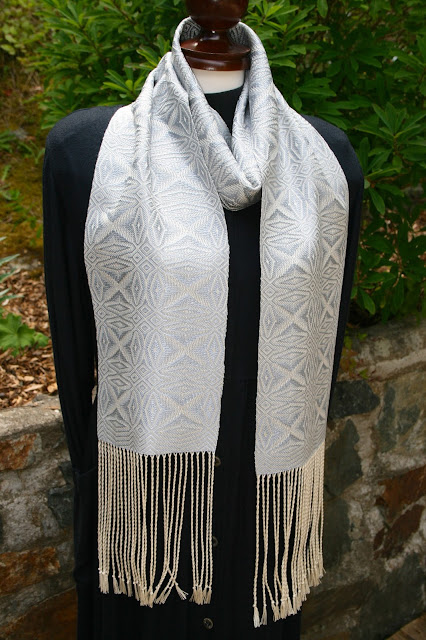 I feel very pleased with how they turned out.  There were two scarves but I'm only showing you one today.   If I showed you both, then one would be your favourite and I think they both are lovely and deserve equal billing.   This one is the  brash, louder version. The "show off" if you like.... 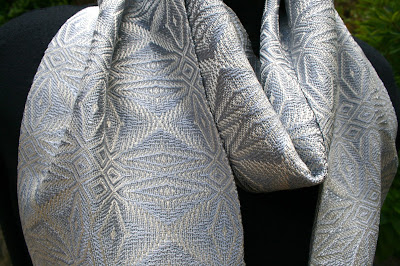 The warp is the new ecru shade of 8/2 tencel at Web's, sett 24 epi and despite the complexity of the pattern, its only eight shafts and eight treadles.  The weft is 8/2 tencel in silver.  In the picture above, it almost looks like it has a touch of blue to it. While weaving it I was amazed at how blue it did look... almost a wedgwood blue. That was indoors in warm lighting and outdoors, it turns silver. 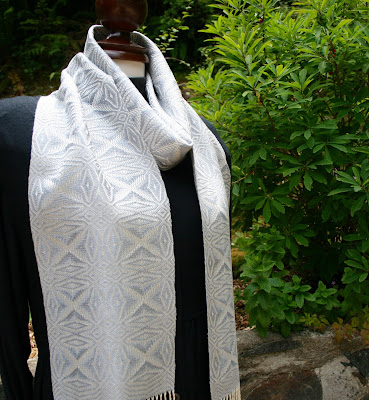 Its a twill progression, with point twill in-between and on the borders.  The first I saw of this design it was being used by Jane Evans and Gudrun Weisinger and I fell in love with it. You can find the design in Weavers Magazine, or in their compilation "Twill Thrills". I modified the draft to fit my scarf  dimensions.    If this sort of twill is something that you like and want to learn more you can find information in: 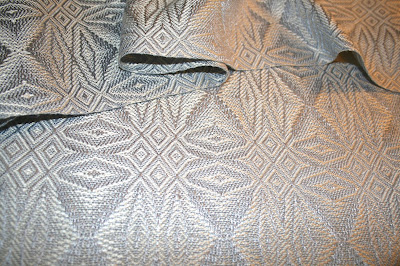 I have woven many many projects of snow flake twill over the years and so now have the treadling run embedded in my brain. I don't need a cheat sheet any longer.   It does seem like I must work to keep my attention on the task at hand though!   Have you ever driven a car and got to your destination and then realize that you can't recall how you got there? You did it on "cruise control" of the brain?

I did that with weaving this time.   I was saying the twill runs out loud and had a good pace going.... and then I zoned out (or zen as some weavers like to say). When I came to again by repeating some numbers which to my zenned brain were too soon to be repeated again, I stopped and really looked down at the cloth. It was quite something and none of it resembled a snowflake or even twill.

I had to cut the weft out as I would have to step on almost every treadle, every time to find the right one.   Sadly I forgot to take a picture.   I can't recommend weaving on autopilot unless you have a dobby loom.

So this scarf measures 8 inches by 76 inches and has a long delicate fringe.

Absolutely stunning! I used my loom for the first time this past weekend & can't even imagine weaving something so complex. Your work is beautiful.

It is absolutely fabulous. I know what you mean about always having a favorite, I think it's unavoidable, but I wonder if everyone will have the same fav, or if we'll like different ones....that's what I find with my customers, anyway.

Just reread this blog Susan and yes, your scarf above is beautiful. How much is it? Or have you sold it?

I still have both scarves and they are for sale at my Etsy shop Thrums Textiles. There is a link at the top right of my blog page. Just click on the picture and it will take you right there.

Thanks for writing... Susan