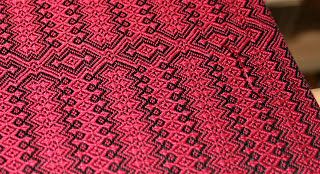 This past late spring I was thrilled to be asked to weave two all silk scarves for a client!  She was very particular about what she wanted as far as pattern, colours and fibre which is great.  She had purchased one of my linen / cotton book marks a few years ago and loved the intricate twelve shaft pattern.

As I had some projects under way on the loom and another special order to go so I had time to order in the silks.   The black 30/2 silk came to me via a friend in California who had done a bulk buy. She has a modern jacquard loom and it eats yarn like crazy! It arrived and looked wonderful!

Meanwhile I found some lovely red 30/2 silk from a Canadian supplier.   When it arrived it was decidedly an orange based red and not the requested blue based red.   It had looked just right on the screen... and of course, all screens are different.  Nothing replaces a real sample and I had clearly overlooked that fact, even though I often tell you just that.   My Bad.

So my client found what she envisioned as the perfect colour and sent me a link to Treenway Silks and their dye number 42 "Velvet Opera".  Oh, yeah!   Rich, deep and  lush.... and rather burgundy compared to the other reds in the lineup.

I last ordered bombyx silk from Treenway under the old ownership and when it was here on the west coast on Saltspring Island. They called their yarns by their actual type of silk and the size of the grist.  The new owners have given all the various yarns names, which is lovely, but apparently confusing to me when I ordered.

I called and spoke to Susan at Treenway and asked if a rush order could be done on 30/2 silk and  in number 42 Velvet Opera?   After hearing my story she kindly offered to take back the finer silk but I declined as firstly, it was my mistake, and secondly... I love the colour!  Susan drove some silk over to her dyer who did it right away ( and was about to go away on holiday for a month... talk about cutting that one close! ). It arrived quickly and it was perfect! 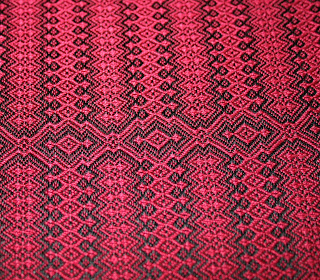 So runs of bad luck usually runs in threes.  I started to wind my warp and it was going well. I had about 50 ends wound when I started to notice little bits of black dyed 'fluff' stuck to the smooth yarn.  They picked off easily enough and I carried on.... but they started to increase and within a yard or two the yarn was covered in little bits.   While they picked off okay and in time would wash out of a fabric, it was not the smooth  silky look I wanted for this project. These are going to New York City! 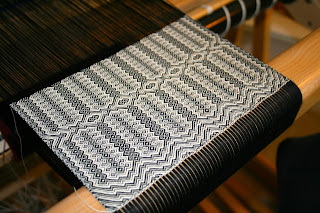 The only other yarn used was a natural off white  bombyx silk, also a fine 30/2  and I'm happy to say, problem free!  From that point on there were no more issues to deal with. The beaming of the warp went well, threading was straight forward and no mistakes, no sleying errors and after lacing on, the warp tension was great! 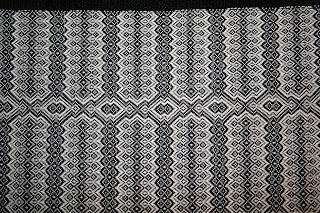 It was just a lot of weaving as the yarns are so fine!  I listened to podcasts as I wove and mostly CBC's Quirks and Quarks, a science program.   There are several ways to treadle this pattern but I used two of them by the client's request.  Next post I'll discuss the various options and show you how they look.  It also took a bit longer due to Life happening (Calli's surgery) and summer in general (gardens and getting out more).   Then, they were done and I cut them off, leaving a third silk scarf on the loom for later. 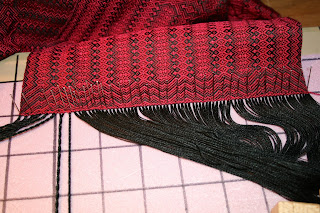 The lady's scarf: I twisted a finer fringe this time and made it seven inches in length. 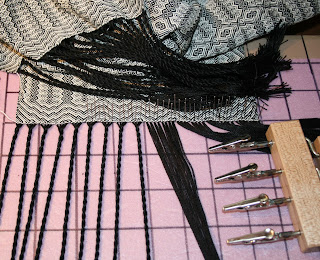 The gent's scarf: was a more regular sized twist bouts and cut to four inches in length.
Time to hand wash them! 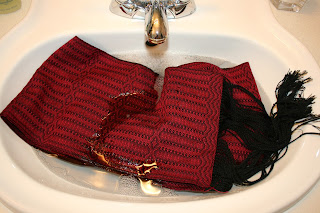 I had a feeling that washing the scarves separately would be best and it would seem my intuition was right! The dye job was a rushed order and so perhaps was not rinsed till clear.   I did several rinses and used a drop of synthrapol to help but this scarf will have to go with a warning to handwash separately. 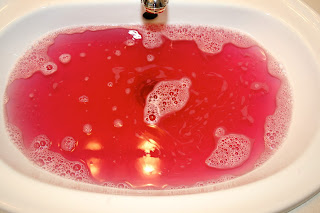 As you can see from the pictures below, the black really wasn't an issue with minimal bleeding. There was no greying of the white silk at all.   A good hard pressing with my trusty steam iron and out popped that lovely glow that only silk has! 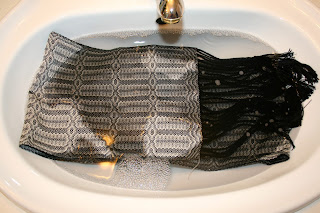 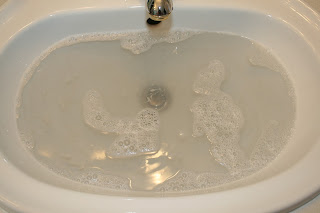 This is the gent's coat scarf:  eight inches by fifty six inches with a four inch twisted fringe.  ( thirty six ends per inch and forty six picks per inch) 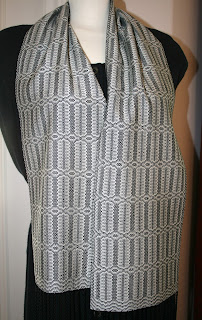 Picture above and below how both sides of the scarf. one side is a bit darker, the other a bit lighter. 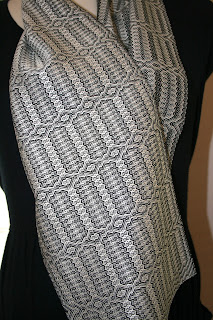 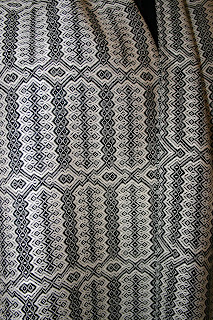 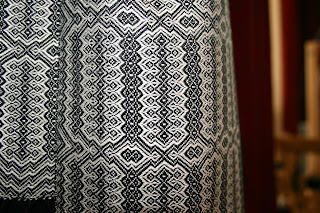 I can't imagine anyone who would not feel extra special wearing this red and black beauty! The burgundy red is simply rich as this picture shows... 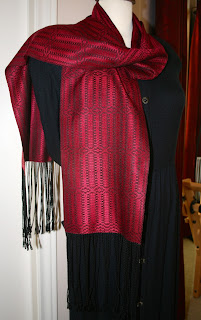 Then there is that silk sheen as this one reveals 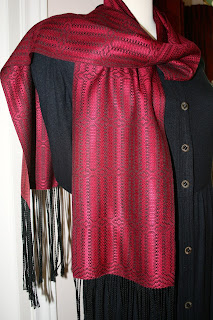 The fabric is fine and feels soft and light under the fingers.  It made all the tromping worth while! The finer fringe was also a good idea and it gave a graceful movement to the fringe. It measures eight inches by sixty six inches, as requested.  (Interesting points: both scarves were three inches longer when woven. Relaxation of the warp and wet finishing reduced both by a full three inches in length only.  Drawn in and wet finishing  reduced width by half an inch.)


These two final pictures are my favourites as they really give you a good idea of how lush this colour is!  I think my client is going to be very happy once she opens her parcel.  I know it was hard to part with it myself. 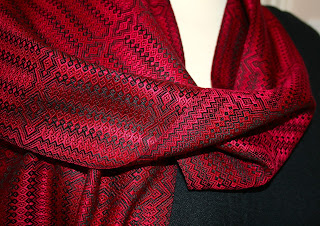 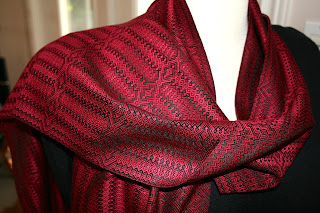 Meanwhile back at the loom, I laced up the warp again and checked my stash for options.  I found a full pirn of fine silk yak blend left over from a recent shawl project. It made sense to me as since I wasn't entirely sure of how much warp I had left. If it was a bit short, then it could be a man's scarf  and if my luck held, then a full length lady's scarf.... plus my pirn would be empty and back in use again! The colour is also nicely neutral too. 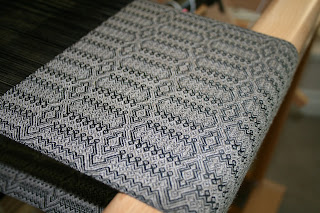 Sorry for the slightly fuzzy focus picture but it does give you an idea of how things are progressing. In a word: slowly.  It seemed like I'm treadling a lot for little gain so I set a fine coloured cotton thread into a shed and wove for an inch. Using my trusty pick glass I counted forty six picks per inch!
Well no wonder it's a lot of work.....  Its labelled 30/2 but it looks and feels much finer than the bombyx 30/2 I just used.

So my next post will be a follow up from this project on treadling variations and how you get more bang for your buck out of a tie up and threading!

Calli report:  she's doing just fine and had her stitches out this past Thursday. Its healed very well and the nasty onesie has been washed and put away.  She will need to see her vet in six months time for a check up.

Me? I broke my recently completed (spring 2017) root canal molar and waiting for yet another crown.   I was planning on getting a crown on it this fall but apparently that wasn't soon enough.   😳

These are truly stunning, Susan. What a test, though, with getting quality silk! I think I would be greatly annoyed to wind through most of the cone only to find it deteriorate in quality. Your perseverance always pays off! Gorgeous weaving!!

Absolutely stunning!! I'm sure that your client will be thrilled. But so fine!

Awesome scarves, as always, Susan. I've been thinking about what to do for a male... Black and white (or silver?) seem just the ticket. And thank you for re-writing the drafts for 8-shafts! Again: Beautiful, beautiful.