I have been using stash yarns all year (so far) and I noticed that I must have six shades of blue, so I reached in and grabbed a cone and out came royal blue.   Its a rather intense brilliant blue.  It was also known as Lapis Lazuli and was quite rare; so rare that only royalty could wear it.  There is an amazing history of the colour, along with others, in this book: Colour: Journey through the Paintbox Colour.   It gives you the history behind all colours used for decorations, painting and jewellery.

I searched through my files and found this lovely, almost 3D effect pattern from handweaving.net (I believe).  I modified it to create an edge border and tried it out in blue. 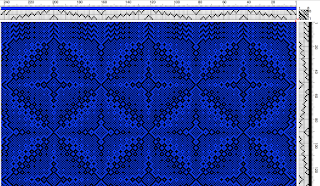 While not quite as brilliant a blue as the program,  the 8/2 tencel paired with black as weft produced a nice crisp design that is full reversible.  The treadling was easy to memorize and so it went along quickly. 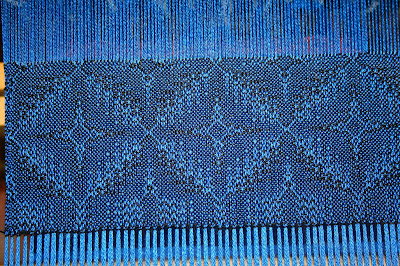 We had company for a week and from time to time I thought about my choices for the second scarf.  It had to be something equally bright ?   Opposites from the colour wheel? (which is orange) 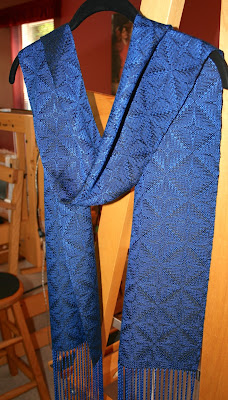 This picture sort of threw me for a bit. I thought there was something wrong with the image but after carefully examining it, I realized that it was iridescence.... of a darker kind! There are some areas of plain weave within this twill and so the shadow effect is actually a black sheen where they interact. 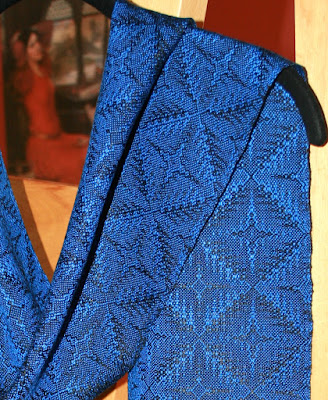 We were having some incredibly bright sunshine but it bleached everything out so I resorted to shooting indoors and fighting with the flash instead.   These pictures should be enough to give you the diamonds versus leaf shapes, the sheen of the tencel, intensity of the blue and drape of the scarf. 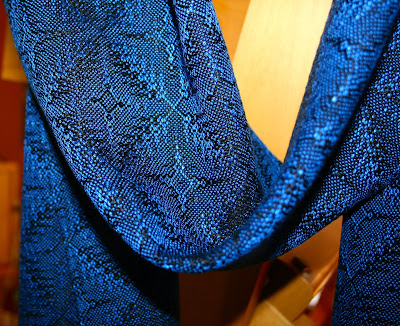 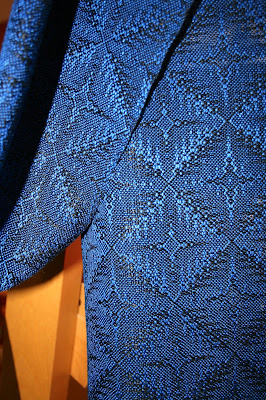 ... and with the sunshine pushing through, just how fine the cloth is. 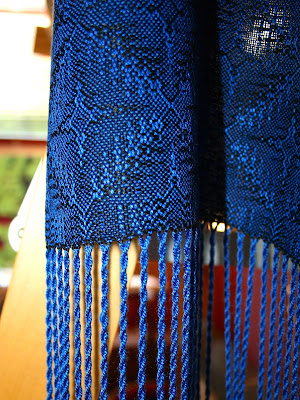 For the second scarf I selected dark teal and at first I was disappointed.   I covered the portion of the black weft scarf that still showed on the cloth roll and took another long look.   The royal claimed the blue tones in the dark teal ..... and left behind a green! 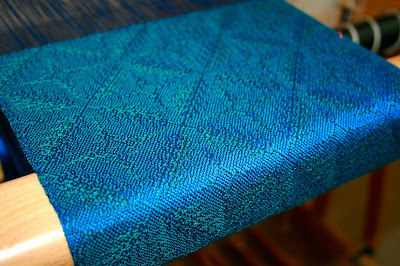 Its also a more subtle effect where the light plays on the cloth and reveals the pattern and the melded mix of colour.   I liked it even more than the first scarf actually!   And like most favourites in a family, it had more pictures taken of it.... 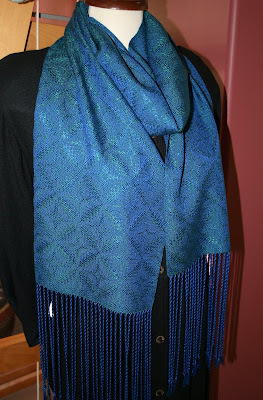 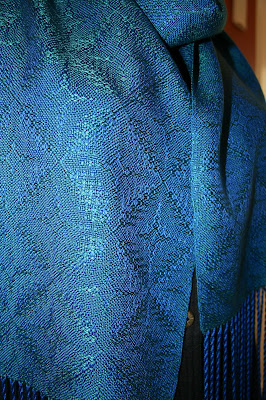 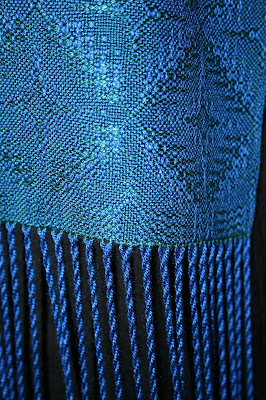 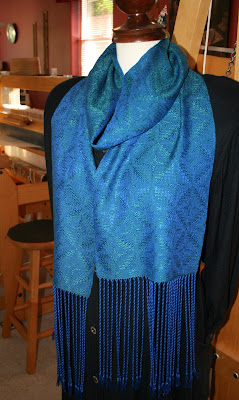 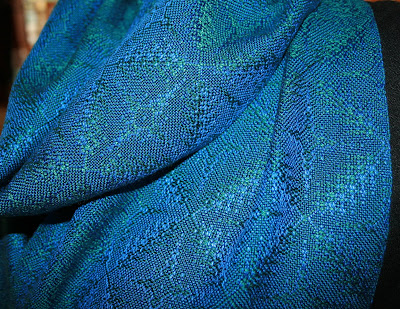 Yes, I will try this pattern again sometime; its a keeper!  Satisfying on many levels.....

The loom is already loaded for a pair of shawls again.... with a shawl commission to weave after that.  I had to order in yarns for the client, but everything else is from the stash.    I'm weaving slower as I'm also looking after hubby who had (very painful) spinal stenosis and is waiting to see a neuro-surgeon for a possible back operation.  Fair turn around as he looked after me through two surgeries in 2014 and 2015.  I've put my foot reconstruction surgery on hold for now.... which is another reason why I'm weaving slower!

Now, slow is not a word I would use around our two grandchildren! They are growing up so fast.... 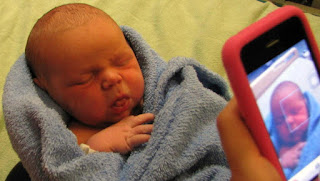 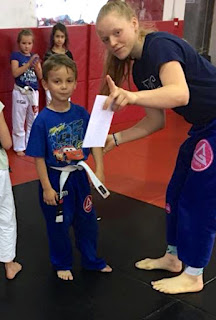 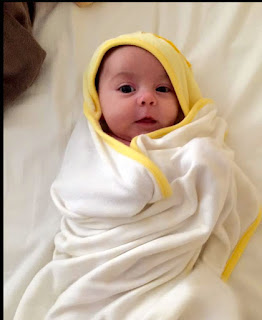 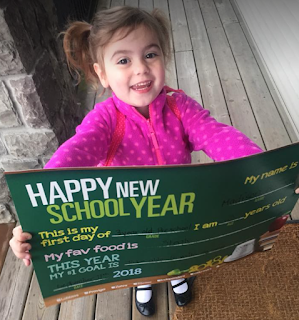 Beautiful beyond words. The tencel has such a wonderful lustre.

Loom With A View said...

Ooh, the green showing up in the second is mesmerizing! This after your last post inspired me to FINALLY set up a dyeing spot in the basement.

Jill of All Trades said...

Susan - - this scarf and pattern are fabulous. I am a fellow weaver and follow you on Facebook. I have JUST started my first overshot scarf. It's tedious but beautiful. Normally I weave wool and rag rugs, and purses. So this is a new direction from me, and everyone who sees this new pattern loves it. Thanks for inspiring me to continue! Nancy in Mexico

I love both your shawls and hope that (with a lot more experience and practise) I can eventually weave things as beautiful.

However I am actually commenting to say what a sweetheart Madison is and that I have never seen a three and a half year old who looks so exactly the same as she did as a baby. Amazing.

I love both of the scarves. I've used that draft before, and will again, as it is definitely a keeper. I admit I never saw the leaves till the first photo of your black scarf, when they jumped out at me! Funny how the eye works, isn't it?

My grands are growing like weeds, too. So glad I moved a few years ago to be closer to them, to actually be part of their lives.

Pretty shawls. When I go to the website for the pattern, what one do I select to make this wonderful shawl?

Both items shown in the post are scarves so approximately 7-8 inches wide. They are not shawls, although I have woven shawls in this pattern later on.

This draft came from Handweaving.net but there is picture of it for a screen capture.