We just came through a very cold week to ten days, complete with snow and high winds.  Darn right nasty weather. Then it warmed up, with more snow falling before it finally turned to rain and lots of it.  That melted the snow and so we now have water everywhere.  Ah, the joys of a west coast winter!

The daylight is lengthening and you can feel the light slowly increasing and by early February it will be very obvious.... that Spring is returning.

Vancouver Island is well known for its annual flower count while many other places are still buried in snow.  We're a little north of the mid island point but we enjoy an early spring compared to others in Canada.

I have always loved pansies and violets. In the language of flowers, pansies represent "free thinking". There is a whole world of  meaning in flowers and my mother taught me some of it as a child, but its forgotten now.  A gentle lady could say much more with a small posy or bouquet than she could with a hand written note. 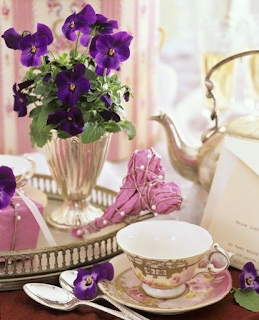 Pansies, Johnny Jump up's and violets are such sweet flowers. They have always been a garden staple in our family.  I was a bit dismayed to see pansies with no central pattern or 'face' in the garden shops one year and thought them sad looking. Real pansies must have a face! 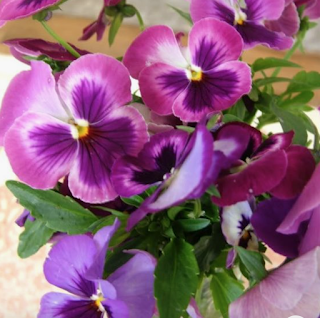 I bought a 8/2 tencel painted warp, shown below,  from Carr Park Artisans on Etsy that has the same colours as in the pansies above. (Christine called it "grape expectations" if you go looking for it.)

I paired it up with 8/2 tencel in  amethyst, almond blossom (now discontinued) and a few threads of gold bamboo.  The almond blossom shows quite pink in the cone, but the rich purples sort of bleached it out.  As I has no other alternatives, I went with it anyhow. 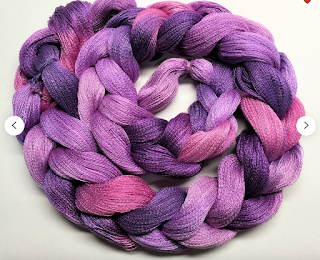 After I wove the first scarf, I decided to change things up and change the gold bamboo for olive green tencel.  So it meant nipping off four threads on either side and pinning in place the replacements.  I went from two weighted film canisters to ten.   Then I found I had accidentally snipped a pale pink  and so make that eleven now.  Its amazing that I have that many old film canisters to use, plus weights!  It was crazy advancing the warp and unwinding every canister. I finally sat a stool at the back of the loom so I could be comfortable while working.  I took a picture to show you my loom's 'wind chimes' but it didn't turn out too well.

Then they were woven off and all the finishing complete but we had a run of nasty weather where you had to turn the lights on in the middle of the day and so taking pictures really would be an exercise in futility. Well, it is for me not being a camera buff. 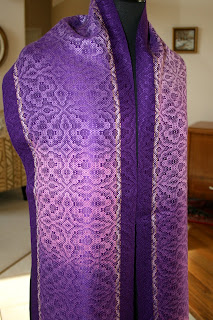 So here is the first scarf: 12 shaft twill from Handweaving.net  #55858. Its has the gold bamboo threads on either side of the pink. It all looked so good on the warping mill and it has backed into obscurity in the cloth. Oh, well! 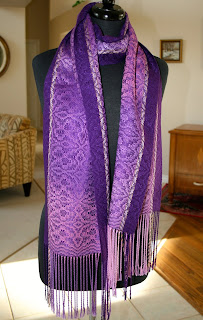 The transitions in the painted warp look like ripples in the cloth. 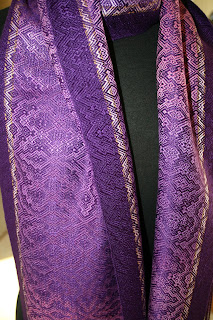 The width is 10 3/4 inches so generously wide, and 71 inches in length. So plenty of cloth to make a turn around the neck or work a fancy draping. It can be folded in half if desired and it is completely reversible. One side is a bit brighter, the other a bit darker depending on your mood and occasion. 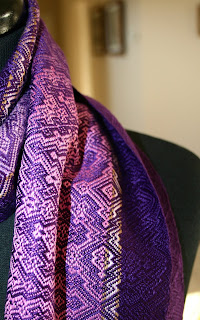 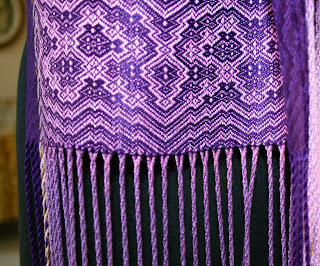 The second scarf has the olive green threads to replace the gold, and a new treadling variation which really emphasizes the ripple effect.  Its my favourite of the two. 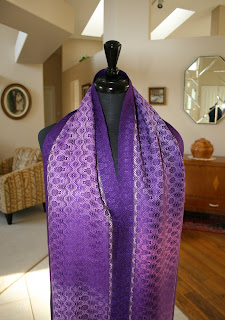 This picture shows a close up of the pattern and colour shifts. 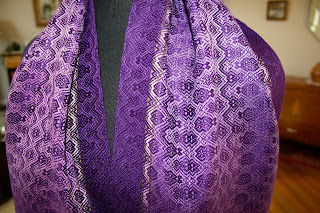 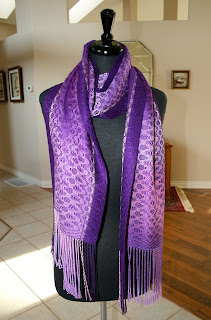 So, take heart... spring will come!  In the mean time, enjoying the winter weaving time. 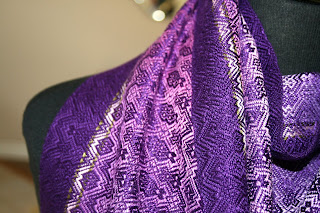 ⚜️ I would also like to give a warm welcome to new Vancouver Islander's  The Duke and Duchess of Sussex!   They are living about three hours drive south of me near Victoria.  They are enjoying the same quirky weather, beautiful ocean scenery and island life.  In time they may explore their new home and come up our way.  Lots of places here for a private home near the water.

This English Nana will have the kettle will be on for tea.  ☕️    Definitely no 🚫 papparazzi allowed here.....
Posted by Susan Harvey at 5:17 PM