All in Good Time ⏰

It would appear that some things in Life simply can't be rushed.  They evolve " in the fullness of time".    Okay, I get that and can even appreciate it.

But this project borders on the ridiculous!

I wound this ten yard warp  four years ago just before we moved in 2016. I thought it would be great to put a nice long towel warp on the Megado and weave off some kitchen towels.   It was tucked away in a box and forgotten until I found it in January.   The project notes were long lost and so I sat and counted every last warp end to see what I had to play with.  I also wondered what was in my head by using this heavy cream beige colour! It doesn't easily pair with much..... but I soldiered on.

I played with some drafts at Handweaving.net, which by the time they made it to the actual warp on the loom, didn't thrill me very much.  The pattern was too diffuse, no clarity to it, or too intensely busy.  So the threading remained the same as it was already in place and I 'borrowed' tie up's from other drafts to see what I could come up with.

I got this below and I liked it. 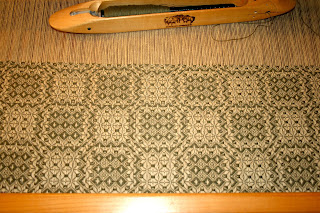 It somehow reminded me of hardanger embroidery.   All was going well until the dobby died on me. Repairs were impossible as it contains all 1990's technology bits and pieces that no one can even get spare parts for anymore.  So there was a delay for a new refurbished dobby from Louet to arrive and set up.  (See older post for details)

Weaving resumed and just in time for a medical crisis with hubby Bruce in mid April. It involved large kidney stones, blocked plumbing, infection and a hospital stay.   It is still to be continued as he's waiting for an urgent medical procedure. I found I was alone at home and could weave 24/7 if I liked, but I simply could not focus on either loom.   Oh, and throw in a pandemic for good measure!

I wound warps instead.... and found it strangely calming.    Two warps, ten yards long for future projects! Incidentally they are both on the looms now.... 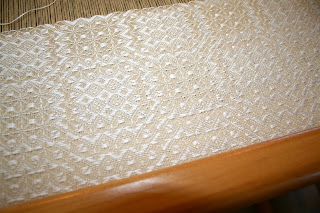 So here's my melded draft, which is woven " as drawn in": 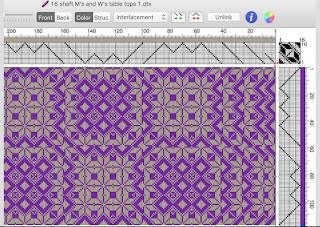 I wove seven towels and decided towards the end of the warp to weave a long runner as a change.  Finally the cloth beam was unrolled to produce a nice satisfying mound of fabric, and I got stuck into finishing right away.

I want to wet finish before hemming but the cloth is simply too long for the washing machine which would just twist it up, so I like to serge the towels apart and wash the shorter lengths.  The edges are very secure this way, and later when I use my steam press, the edge is totally flat for hemming. 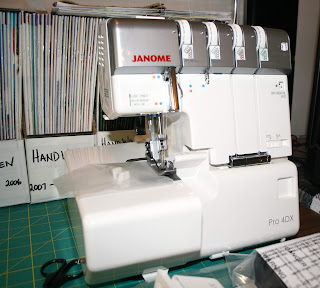 Two days later I was back in business with this younger model with more bells and whistles! 😊   (The old serger will eventually be repaired / tuned up and sold in time.   More waiting again) 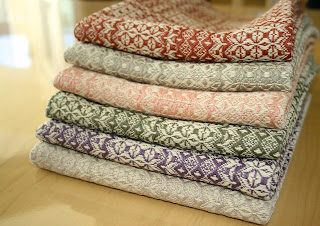 So here are six of the seven towels  in a nice satisfying stack. I'm calling them my " Country Kitchen Towels" as they have an old timey look to them.  They are approx 20" by 30-31" and all are hand sewn so can be used as either a towel or small runner. 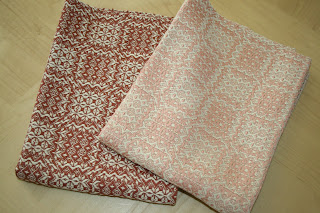 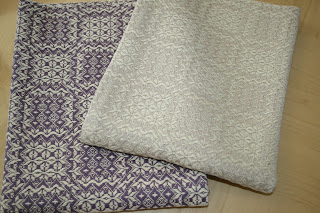 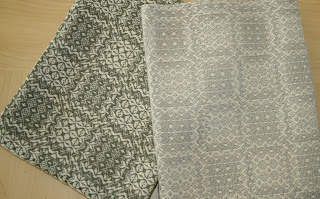 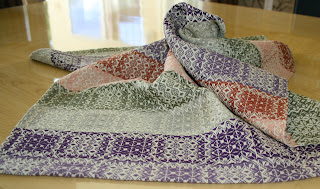 Towel number seven is a compilation of all the colours as I had part pirns of all colours left over and this was a neat way of using them up. It reminded me of some 1930's table cloths I saw in a museum once. 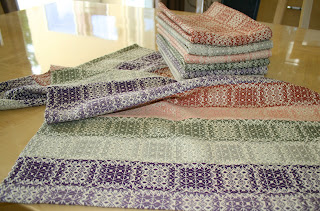 So, last but not least there is the table runner. That turned out very nice and looks good on my large dinging room table!   Same warp, same pattern but this time I used 8/2 bamboo weft. It wove up beautifully, looked even better after wet finishing and pressing.   Fringe is a neat two inches and the runner measures 19.5 inches by 62 inches. 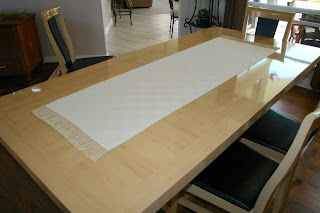 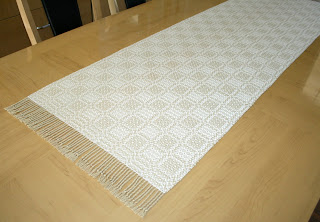 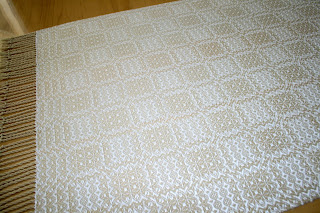 A final close up view: you can see the sheen which picks out the pattern beautifully.  The tea cup and saucer is part of a small set brought back from Hong Kong in 1953 by my Dad, who was in the Royal Navy, for his mother. The dragon on the china is raised  and is hand painted.   I just found out last evening that a friend inherited a cup with the exact same pattern from her grandmother. It must have been a thing back in its day. 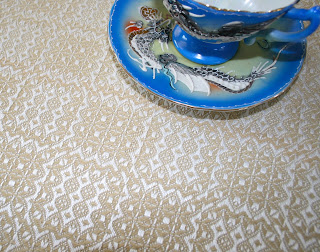 Wow! What a journey!! But at the end, such beauty!