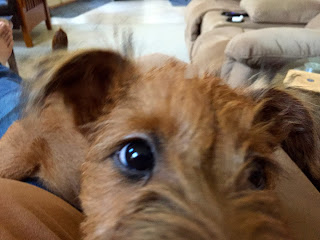 I have been dreading writing this post and been avoiding it as a result.  So here is what I wrote and told a friend this morning:

"I haven’t done any weaving since early September but will be starting once again later today or more likely tomorrow.

I’m very sad to tell you that we made the hard decision to return Rhaea to the breeder and we drove down island this past Sunday to take her home.

So what happened? Well, she started displaying behaviour that seemed much more than mere ‘puppy playfulness’. Leaping at the back of my legs and biting me hard. Hubby has bite marks  all over his hands.  If you tried to untangle a leash, she’d bite, and barking endlessly, plus endless 'zoomies'….. and a once dry and housetrained dog went back to doing it in the house, and eating it.

We had been going to puppy classes and faithfully doing training at home. Everything was a teaching moment. She would sit, even do a lie down but when the treat reward didn’t come fast enough, she’d leap up and bite hard. She was spending more time in the 'time out' crate than out and our nerves were seriously frazzled. We were feeling ill  from the continual stress of it all and not knowing what more to do about it.

This was quite unlike any previous puppy experience we have ever had ….. and we’ve had more than a few and always had dogs (terriers) until Calli died. We talked to the dog trainer about ‘board and train’ but after spending a LOT of money, there was no guarantee it would work once she returned home.

I talked with the breeder honestly and she said to return her now and it was better to do that sooner for both the pup and for us. So the reports coming in now is that she’s settled back into the breeders home where there are a large number of other dogs and she’s now at the bottom of the pack order and no one puts up with her shenanigans. Even her mother has straightened her out a few times. So, apparently we weren’t effective enough at being the Alpha dogs here." 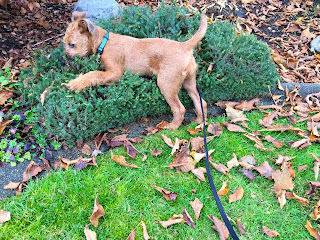 We are dealing with many emotions regarding this decision, but sadness is the main one. It became clear we couldn’t carry on with things the way they were and it wasn’t a good situation especially for the pup.

I have heard from her owner now and it seems she’s doing very well in a group setting with other dogs. So we are happy its working well for her there.

As for us, well our home is very quiet now and one ‘side effect’ is that I wake much earlier now. I have caught up on everything that was set aside for some weeks and will be resuming weaving this afternoon.

Oh Susan, I am so sorry that you had to go through this. I know how hard you and Bruce prepped and worked to make a happy home for your pup. I'm sure this is very difficult, but I think you made the right choice. For whatever reason, she needs to be in a group situation where other dogs can put her in her place. My heart goes out to you both. - Karen

I’m so sorry, Susan. What a difficult thing to go through. I am still mourning a Maine Coon cat we returned last March, after we had him two months and he got comfortable enough here to start attacking us as prey. We can’t know what is going through those minds, so we can’t always fix it. I surely hope Rhaea’s mother and housemates will be able to educate her in her own language. She is a beautiful dog.

Susan and Bruce, you are both in shock right now. Although you are heart broken you did the correct thing for not only yourselves but for the dog. It is so hard to make decisions like this, but things have a way of working as they should. I am sending the both of you lots of warm wishes and big hugs.

Oh dear Susan, what a difficult decision to make. It's unfortunate that sometimes a pet just doesn't work in even the most loving setting with incredibly responsible pet owners. Maybe a little mis-wiring in her brain. Hopefully she'll fit in well with other dogs that will keep her in line and she'll be happy.......but you and Bruce oh so sad right now. My heart goes out to you.

SO SORRY for you! This was undoubtedly a very difficult decision. Sending you virtual hugs and puppy licks.

I am so sorry about your puppy. You just never know what goes on in a dog's head. Our puppy recently started being food aggressive - and it is pretty scary for me. All the best!