Back in 2006 Lynnette and I enjoyed a little getaway and we attended  a weekend retreat for weavers and spinners on Quadra Island.  I'm not sure of the number of attendees but lets say a  hundred women at least (and a couple of men too!)  We spun on our spinning wheels and chatted by day, enjoyed meals and seminars together and then there was the fashion show on Saturday night!   It was a wonderful time! Lynnette and I had adjoining rooms and the lack of TV sets in our rooms didn't phase us a bit and we talked non stop the whole time.

Well, we are  planning on attending the retreat again, this time in beautiful Parksville,  the end of March and there's the Saturday night banquet and  fashion show. Better get something under way for it! 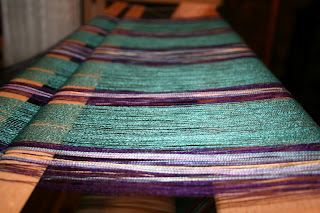 I've been planning a shawl and a certain friend was the inspiration for me. Hence this shawl's name. "Little Lochmaben" 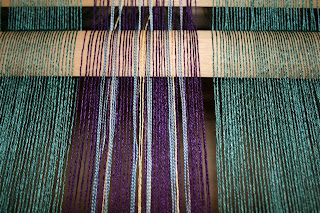 Its  tencel (of course :) but with her favourite colours of turquoise and with amethyst purple stripes with a variegated sections that has colours that run from soft turquoise to blues and then into plum tones. Centre of each major stripe grouping is a dash of yellow gold. I had my Itten colour star  out and got my colour choices firmed up in no time. What took time was finding a suitable pattern which I located at Handweaving.net, and then arranging the colours using my PCW Fiberworks program.  I twiddled and tweaked it...then wait a few days and tweak some more.

Finally I wound the warp and beamed the warp. The colours seem to work together nicely.  Threading went well and I took my time and checked each section. I *hate* fixing errors after I've started to weave so this part I pay close attention to. 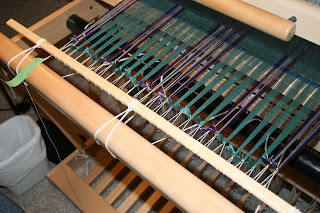 I also decided to lace on this time over tying bouts around and over the rod. Tencel is a slippery yarn and you could be endlessly fiddling with knots that won't stay tight and I didn't want the aggravation. It also reduces loom waste which is a nice bonus  and that little bit extra is added to my planned sample allowance!

In the picture above I have the cord laced through the half inch bouts and on the far left is the end tacked down with some painters tape. I'm working out the loose tension and shifting it leftwards. When I'm happy with the results, I secure the tape around the cord over tying it as I *may* want to undo it at some point and make a correction. This way, I unwrap the tape, unstring the bouts to the one I want and usually I snip off the knot and make my fix, reknot and restring again. Yes, I do like lacing on and I'm wondering why I moved away from it?  Variety is a good thing I guess and helps you to understand what works for you when there is so many choices in techniques. Its good to try new things and learn from others. 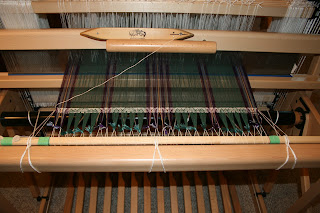 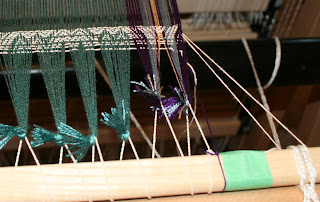 Okay, the lacing cord starts on the right but I like to add some tape to secure the small end. It can shift on the rod otherwise and make your weaving start a bit awkward awkward. So its a quick fix that saves trouble later.  The dark thin thread around the rod is my floating selvedge thread. It goes through the reed but not through a heddle and is weighted off the back of the loom.    Then there's the waste yarn that's been treadled in.  Someone years ago told me about a snazzy trick to close the gaps in your bouts and get weaving sooner with only three shots of weft (okay, in this case it was six...) I used a non slippery 8/2 cotton yarn in a light colour and threw three weft shots *with no beating* until the end. Then tap then gently down and into place. As this is a 12 shaft project and slippery yarn, I threw three more shots and tapped again. You can see where I have done this and then wove in the balance of the six shots to the end. 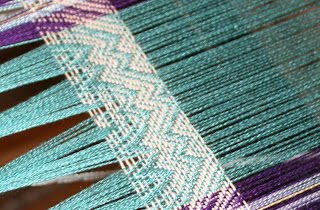 It tightened up nicely! So if you look back to the previous picture you'll see that I hooked my waste yarn around the rod on both sides and then wove more shots after. I picked that trick up recently from Laura Fry's blog and thought I would give it a try.  Well, the selvedge went from curling slightly to straight! It holds it nicely until the rod and warp drops down and around the breast beam. I like this neat trick and will use it from now on. Give it a try for yourself!  Thanks Laura! 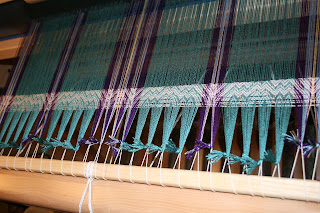 From the knots to the end of my scrap yarn is four (4) inches! I would have used a lot more than that to do the normal tie on.  Also my lighter scrap yarn revealed no threading errors!  This 12 shaft, 12 treadle pattern  is warped up in 8/2 tencel, sett 28 epi in the darker stripes and 24 epi in the solid turquoise bands. It sits at 22 1/2" in the 12 dent reed and has 576 ends, and is 4.5 yards (shawl, fringe, samples, take up and  loom waste etc)

So I'll end today with giving you a peek at the sample section that I decided to weave first this time. It gives me a chance to double check for errors and get familiar with the treadling, which is 'tromp as writ' (or treadle the way it is threaded). I think I'm going to enjoy weaving this gebrochene twill!

Part two and the big reveal will come its fully finished with fringes twisted, beads added and washed and pressed.....and that will be a little bit yet (sorry). If it helps, it did come off the loom today and so it won't be too long to wait.
Posted by Susan at 10:11 PM

Wow, I didn't realise I had caused any of that to happen ! What a boost to think I've been an inspiration, as you know I am having a weaving depression this last 24 hours but that has really put me back to rights !! Thank you so much.
The post is great and lots of lessons in there. The new tying on hints are just great, as you know I tried them out on my last project.
You will steal the show with this one, can't wait to see the finished article.
Thanks again
Dorothy

Oh, that is lovely, Susan! I'm curious, can you talk about your thought process in making the purple sections a different sett than the turquoise? I'm sure this will be a huge hit on the runway!

That's a lovely pattern, and wonderful colour combination. How do you feel Tencel compares to other regnerated cellulosic fibres like Viscose Rayon? I've only used Viscose and it has a lovely handle to it though I understand it doesn't hold up too well to repeated washing

Susan, the shawl is going to be so pretty. Dorothy will be pleased with the colors you used! Really want to see what beads you add to the finished product. Sure wish I could be at the weaving retreat, sounds like fun. Enjoy yourself, you deserve it.

Purple and green are my favorite colors and this is going to be a stunning project. I am drooling over it.

I have translated our German friend's message:

Thanks for the detailed report. The sample is very beautiful. Love of greetings from Ate

You are quite welcome Dorothy! Don't let the recent disappointment get you down. We all have them no matter how many years we have under our belt weaving!

Linda: I sett the purple sections just a bit tighter so they would be a bit more prominent. I had to be careful as I didn't want any problems with them weaving up 'tighter' than the other sections and cause distortion so it was only 4 extra ends per inch. I might try 6 next time...

Andrew: Just the other day I told a weaver that my new project was tencel and she immediately called it rayon. (Um, no its not!)
Rayon was very popular back in the 80's and early 90's and clothing purchased made from it had to be dry cleaned. It shriveled up in water! It gave everyone a bad feeling.
I've done some research on tencel or lyocell and have a published paper. Rayon was made using solvents and they were disposed of after each batch and so quite polluting. Tencel / lyocell is made from processed tree farm waste and is processed using solvents but in a closed loop system and upwards of 99% of the solvents are recovered and reused.
Lensing Lyocell was a Dutch company and they specialized in making sheets, towels and other 'linens' for the European market in the early 2000's. These would be washed and used quite frequently.
The North American market saw many lines of clothing made from tencel and all were machine wash and wear.
They are cool like linen and wick moisture away from the body. {Its my understanding that Lensing subsequently bought out the other company and now owns both.}
Weavers love the deep colours and shine and its been dubbed "faux silk". Its readily available, great colour line up and a reasonable price. It also teams up nicely with silks and I use this combination frequently.

Martha: I'm going to have to dig through my bead box and see what I have! I may be *forced* to shop for more :)

Thanks for all the comments... hope I answered your questions!
Susan

So beautiful! Can't wait to see it finished.

Susan, as usual, this is absolutely stunning: Color combination, draft, and execution.

That new shawl will be beautiful. Love the color combination.

Susan, I think this is your best colour combination yet! And the bright gold right in the middle of the pattern is so right...
Dawn