Snowflakes in my Sleep 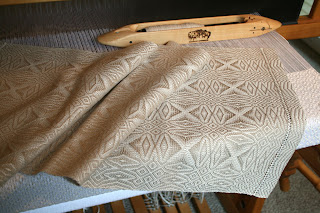 Years ago I can recall falling head long in love with snowflake twills when I opened a copy of Weavers magazine, issue number13. Apparently a lot of other weavers did too as they went onto publish more versions and designs in later issues as well.
In issue number 18, with a Halloween themed cover of witches, there was a draft designed by Guild of Canadian Weavers Masterweaver Jane Evans that I have used time and again.  To me, its visually perfect!
Twill progressions are not difficult to design and play with.  You can create circles, elaborate boxes and even hearts!

I have woven shawls, scarves and runners using snowflake twills or variations and all are snapped up at sales or when gifted, given 'pride of place' in the recipient's home or wardrobe.  A creamy silk scarf for my mother in law's 80th birthday,  five  matching snowflake  runners for five dear guild friends who lost their homes in 2003 in a wildfire that ran through their properties and into a city.  It always turns out well, and is satisfying for both the weaver and the receiver. I think the only thing I haven't woven using snowflake twill is tea towels and now I'm wondering, why not?!    It always looks far more complex than eight shafts and so it can inspire newer weavers as well! 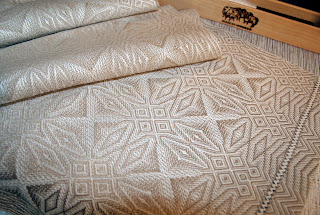 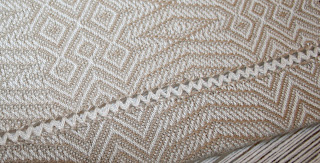 This shows the trellis hemstitching. If you click on the image you can see it better (or any of them!) The little 'v's' work well with the larger 'V's' in the cloth. I have shown this technique before in this post. I like to choose a technique that works with the pattern and end use of the cloth.

The beauty of snowflake twill is that its fully reversible! I like to bear that in mind when planning as well and so sometimes I will make runners with short fringes instead. They are usually measure two inches plus tassel.  Good friend and teacher, Gudrun Weisinger taught a lace weave class some years ago and the one thing I took away was the nifty method of switching up a fringe treatment! I'm not sure what you call this except "fancy- smancy" 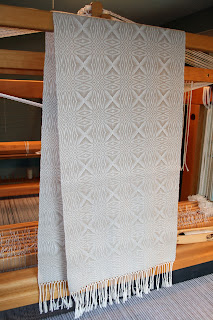 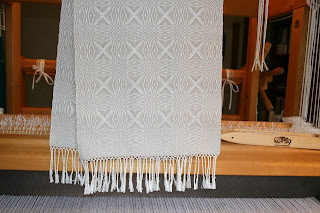 This runner is 13" by 54" in length and looks a bit stiff as it just came off the pressing table!

A lesson in a few images: 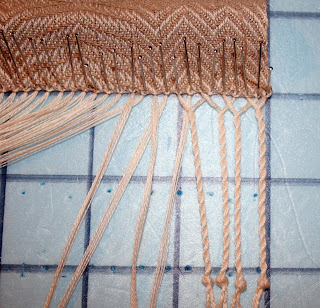 Pin out your item on a foam board. {Basic instructions on regular fringe twisting can be found here }  You must carefully select the bouts to be twisted as shown. Its hard to describe and so here's another picture to enlarge  to show the arrangement: ( you can also right click and save it for review later) 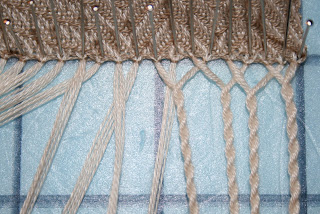 Then you clip the pairs to your fringe twister. I happen to have a quad so can do two sets at a time. 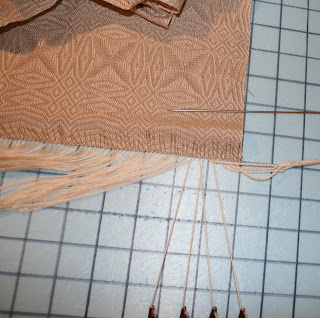 Twisted tightly to the right. I usually keep count of the turns so it can be duplicated on each grouping for consistency. In this case, a count of 30. 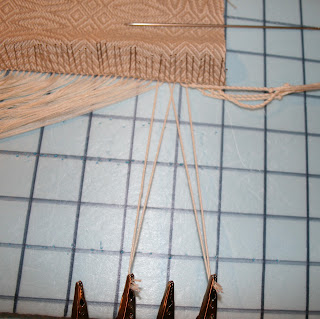 Shift the ends to a single clip each.... 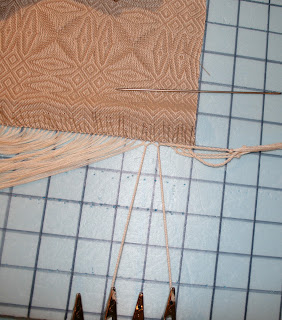 Then twist to the left, usually the same number as turns as previously counted.  Then I release one group.... 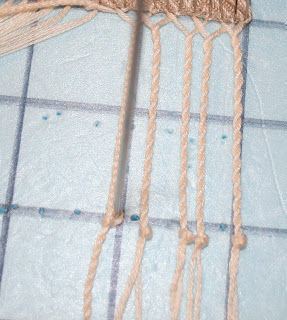 ... Make an over hand knot and  pin to my chosen grid line, which in this case is two inches.  Once the new bout is released, it relaxes and will match the other previous ones. 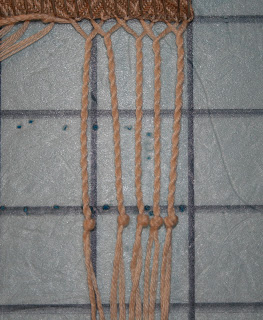 Like so!  I feel its the consistency of the same number of turns, on a matching length of warp ends.  Sometimes we are using uneven lengths due to part of it being 'loom waste' on one end of the cloth. I trim them to the same length on either side. This makes counting your turns far easier.

Nothing makes me smile more than cruising around various weaving blogs and seeing foam boards and grids being used with fresh off the loom projects pinned out. My little invention to make my life easier clearly is being enjoyed in many other loom rooms!

Having said that, many weavers don't count and don't pin out. They simply hand twist, knot the end and release to let the bout twist back on itself. They might use books to weight the warp and I have even seen cats being used! I like to pin so it doesn't slip and slide out of position while being worked on. I found that very annoying and I quickly got tired of dragging books around (and we have no cats!).   Since my weaving tends to lean towards finer threads, I like consistency in my finishing and that includes the knots being all even when viewed. It shows that even a small detail like this was carefully done. Small details add up to an over all effect!

Attention to details start as you plan the warp....select your yarns, wind and carefully beam, thread and sley. The weaving part is the shortest time!  So plan on how to finish your work too. Its the frame around your new work of art!
Posted by Susan Harvey at 11:45 AM

Wow! The snowflake design is so beautiful! I love it in the two colors you used. Gorgeous!

Thank you so much for such an informative post. I love the v-stitch hemming and can't wait to try it. Thank you for the tutorial. And, I've been wanting to try making twisted fringe. I love the idea of using a grid. It would be easier than a ruler! I'll have to twist by hand though as I don't have the tool you mentioned. I'm not even sure what it looks like. I'll have to Google it. :-)

I noticed a link on the side of your blog to help plan a weaving project....I'm heading there next.

What a great post ! I will confess to being a copier of the 'Susan' foam board approach to good fringe twisting, couldn't manage without it !
I liked the lesson on 'alternative' fringe twisting, have been meaning to look it up and give it a try so thank you for that.
Like you, I love snowflake and in the days when I only had 4 shafts I was thrilled with my first snowflakes. I really liked the small neat pattern. 8 shafts make great snowflakes though !
Some lovely projects there in the photos.
Thanks Susan.

The fringe twister used in this post was Leclerc's quad model.
Its not as smooth as my favourite Forsyth model, but does do double the work and so a bit faster.

The Forsyth model has three prongs and the makers had taken a sabbatical on making more some time ago. Hopefully they will return to business in time.

Fringe twisters are a great investment as they save your hands and much, much time!

Once again I am blown away by the beauty of your snowflakes! I have some silk and a draft, but I need to screw up some courage before attempting it (maybe I should try something heavier than 60/2 silk?). You inspire me!

I accidently hit the wrong button while trying to update messages on my iPhone... oops!

Yor finishing technics are just GREAT!! Thank you for sharing them!!!!!

The snowflake pattern is simply breathtaking! As are so many of your woven pieces.
--elizaduckie

Another great post Susan! I can't wait to see the tea towels, I just know they'll be stunners!

Lovely tutorial, Susan! Coincidentally I own a snowflake twill runner woven by Gudrun in teal and white. A treasure!