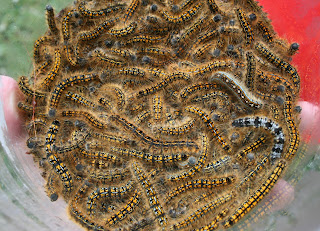 This is what a mild winter looks like six months later!   Have you ever gone for a drive along a country road and noticed the 'tents' hanging in the tree tops? Well, the Forest Tent Caterpillar runs in ten year cycles and when an infestation occurs, it takes three years to get under control again. The moth lays 300- 500 eggs per nest and although we cut and destroyed all we could reach in our orchard, the thirty to fifty foot alder trees were unreachable! (Especially when they were on the neighbour's property) So for the past two weeks we have been under invasion. They literally crawl uphill like they are programmed  little zombies. You could see them coming up the driveway and through the lawn. They eat everything in sight! We started picking them off the flower beds and a cascading wall of a native vining plant called kinnikinnick (or bear berry or Uva Ursi)  They *LOVE* this plant and once on it, they dine and then seem to go into some sort of orgasmic coma. You can pick them off and they lay still like they are stoned or something.  The trouble is, they eat the blossoms. The local bees and bumble bees wait all year for the wall to bloom!  So while I gave up on the thousands elsewhere (no lie!) I did work to keep the  kinnikinnick wall clear. The honey bees just buzzed around me and I made every effort to stay clear of them working the flowers. 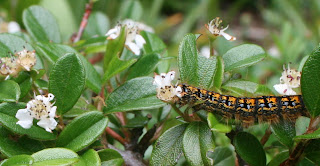 As you can see here... the flowers are catching heck! Click on the pictures for a close-up! 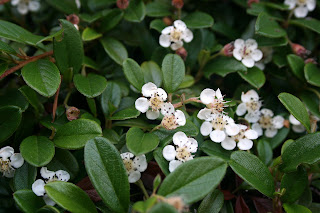 Here is healthy bear berry that I have managed to keep the 'Pillars' off for the bees.   (We have started calling them the Pillars ... as in " the pillars will get you!")   They like straight lines such as the boards in our deck and so you see little convoys of them all in motion to and fro.  The jar shown above is a 2 kilo peanut butter plastic jug and it has been full to the brim several times with no effect. Eventually, you go inside and ignore them as Mother Nature will win this round. Trouble is, they'll be back next year too as it will be year three.

The last time I can recall them being this bad was back in the late 1980's when we visited Salt Spring Island when out touring on our boat. The fall country fair was on in Ganges and we found jars of 'pickled tent caterpillars' on display and even entered into the fair for judging. The lady who had brined them up told me the fair was about the local bounty and since they grew more of them than crops, why not?

I'm concerned that the ants will be enjoying the extra bounty of dead caterpillars and increasing their numbers too. They seem to be the only thing that eats them. Birds leave them alone unfortunately.

We have another casualty this year. My favourite tree.  I went looking for a decent full length picture of it and now I'm further saddened by the fact I didn't really take its picture while it was healthy. Here it is in 2009: 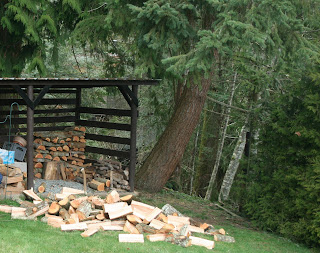 Well, the base of it anyway. It had just prevented a group of three large trees from falling and hitting our house. I was sitting having my early morning coffee when I heard the crack and watched them fall!  This old fir that must stand at least 80 to 100 feet tall, blocked them from coming towards us and redirected them to fall behind the hedge in a nice tidy heap. What you see there is some of the firewood from the adventure.  It resulted in many trees being taken down due to disease or age in the coming weeks between our property and the neighbours. They had developed  a condition called cone rot. 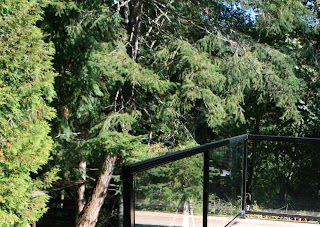 The needles aren't as lush or as green and we called an arborist in to look it over. The back needles on the inside end of the branches had gone brown months earlier than they normally do and were falling off. He had to go and do some research and when he got back to us he told us it was an infestation of a silk type worm. It would either make a come back or fail completely. You might recall sometime walking under a tree and there is a little worm hanging from a fine thread? well, its those little things. 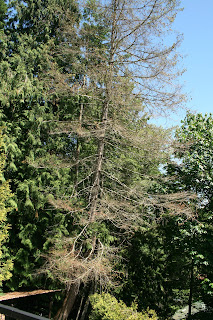 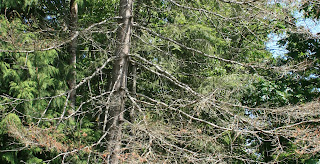 Its lost the fight. Those sweeping branches that I saw an owl sitting on one evening twilight, looking so much like a Robert Bateman painting, will be coming down this fall. A casualty to worms that didn't die off this past mild winter or the one before.

We have other pests too. Oh, there are raccoons here, and feral cats from time to time. Wild rabbits in the meadow and the odd neighbour's cat comes hunting birds. Bears in the fall and we understand cougars pass through here spring and fall at the change of seasons. There are also ever present deer. We have a much smaller variety here called Island deer. Most tourists see them by the side of the road and think them cute as they look like babies, but those are full grown! I've watched them go from standing still and leaping over a five foot fence with ease. They have brought down full fruit frees and cleared entire crops  from the trees.  They eat anything you plant for flowers around the house except for heather and lavender.  The (so called) deer proof Lily of the Valley?  gone.... My glorious purple lupine? gone in one night!
So we bought tomato plants and a new small Japanese maple and put them in pots on the cedar deck to keep them away. They only go on the grass or natural ground... right? 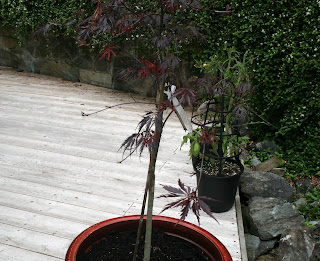 Apparently not. Half the tree was eaten and they took all the shoots and flowers off the tomatoes. They've all been relocated to protective custody on the upper deck, behind bars.

We personally have made many choices to 'do our bit'. We compost kitchen vegetable waste, participate in a kitchen scraps composting pick up, recycle all we can at home, and only put out one bag of garbage every two weeks. We multi task our trips to town to maximize on fuel. We turn down the heat, and switch off lights.

I hope its enough.... we have a grandson and his future to consider now.

A parting picture or two: 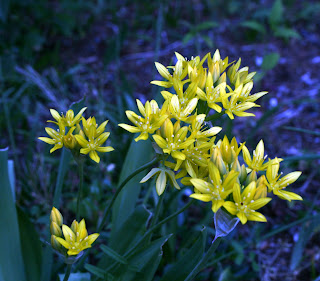 This an old variety of Allium is just coming into bloom.. The perky star star like flowers can be picked and toss into a salad. They taste like chives or onions. Some gardeners we had here two years ago said that they hadn't see this plant in years as its an old varietal. It seems most people go for the purple globe types now.
Best news? The deer leave them alone!

Today as I was typing the basics of this post up, we had a big shadow swoop by the patio door and eventually a large bird came in for a landing. 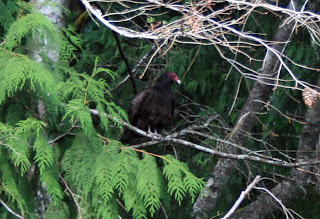 I had my camera nearby and Bruce crept out and took several pictures quickly. A big Turkey Vulture had landed in the dead fir tree. Now you can make of that what you will!

And that's exactly why I gave up gardening. Besides the section being pure sand there's hmm rat family in wood shed, hedgehog burrowing under the steps, rabbits or hares visiting in the evenings, etc. Mind you your critters are more awesome than mine!
By the way I finally got the book 'The First Ladies of Rome". It took a while because I tried to find an audio copy then got my daughter on the search. I don't have much time for reading so it will last a while.

Hi Dianne,
There's no denying it... its a bit discouraging when it comes at you from all sides!

Bruce has a high fenced garden compound down by our orchard but he's still recovering from his last winter drug reaction and can't work the garden this year ( and I don't have the back for it anymore)
The deer can't get in there, and sadly, all that's growing there this year are weeds.

Did you know you can have one of these caterpiller's in your blouse and not feel them until they reach your hair? Thank god where we are is totally private as I had my top off in 5 seconds flat!

:) Susan
PS That's a great book.... you might find yourself reading it faster than anticipated!

The trees on Gabe are looking like they do in the winter - I have to do a double take as the deciduous (especially Alders) are naked....and of course my raspberry bushes, plum trees, blueberries...and the list goes on. Of course the mulberries are fine...but I don't care for mulberries!

I couldn't believe the 'pillars' until I got there and saw them! Holy gross me out!
The really amazing thing about this post was that your photos were lovely. Seems that a great photo can make even a pest look cute!