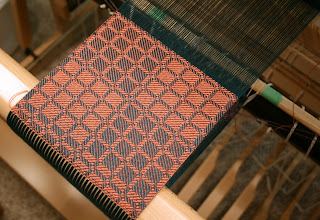 I thought I'd lure  you in with a nice piece of weaving right at the start! It will most likely be the only one in the post...

The studio is full now and all three looms are in a state of change. Somehow it feels a bit disconcerting and I'll be happier when all three are loaded and works in progress.

My smaller Louet Spring was named Lilibet but that is now changed and I'm calling her Lisbeth instead. Yes, I'm a fan of the Girl with a Dragon Tattoo books. Such a shame the author, Steig Larsson, passed away before he could write more! 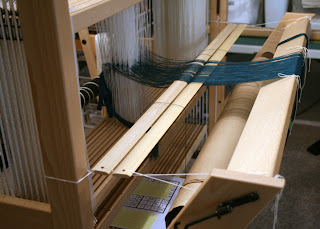 I pulled this warp some time ago and it had been hanging waiting for its turn in the queue. It has been preempted by baby blankets and then receiving blankets for grandson Ethan (who has his first cold right now, poor thing!)  The warp is dark teal  8/2 tencel, approx 200 ends and 7.5 inches. It is long enough for three Classic Drall  scarves, each 70 inches long each and fringes.  Beaming it was a quick job and threading went well. 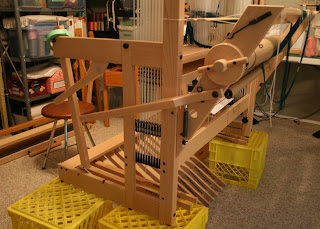 Then the (light) loom was hoisted up onto crates for her tie up. Since I was only tying up eight treadles for eight shafts, it went nice and quick compared to last time which was twelve shafts and twelve treadles!

So weaving is underway on this loom as and when time allows. We've had a lot of activities on the go recently and so I haven't been weaving as much as I would like.  Also this loom was shifted over to the middle space and the Megado (or Margaret) now sits here as it needs access to power.

So how is the Megado coming along? 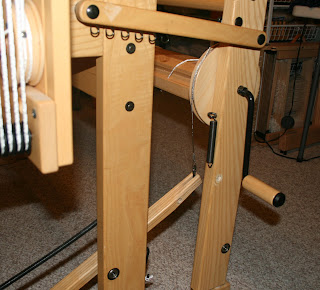 Well, there were some interesting times getting the brake assembly on and set up right. We knew we had it on right, but couldn't get the lever to sit horizontal. It was a grand fight and two manuals in play and emails to Jane Stafford. 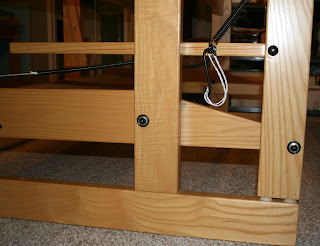 There! Isn't that a thing of beauty??  The difference between the lever sticking up hard under the shafts to being in perfect position is the carefully placed STOMP.  Yup, we had to get far more physical with it that we originally realized!   So next up was getting some spare parts to replace missing nuts and bolts. Also some extra heddles. I thought I would take the older heddles off and wash them and quickly discovered that working in the tight space where 16 shafts sit, is like doing an engine repair via the tail pipe!  I did get shafts 1, 2 and 16 done and have quit for now. Those three shafts worth do look whiter and brighter. I'll tackle the rest one shaft at a time. 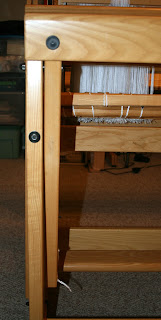 We also corrected a rubbing swing arm on the front beam by adding an extra washer. Small fix but makes a huge difference! There was a space at the top but it rubbed at the bottom and since that part moves with every change of shed, it had to be fixed!

Some of the missing parts we are waiting for are for hanging the brain onto the side of the loom so in the mean time I got busy with this: 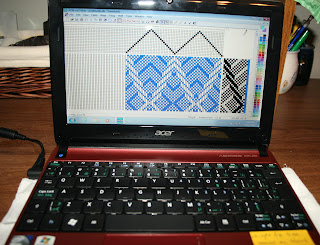 I bought a small Acer notebook computer on clearance. The picture doesn't show its cute size of only ten inches! Its operating on the new Windows 7 operating system and so has wifi on board. I can play with my Fiberworks program and send copies to the printer.  I upgraded my Fiberworks to the newer Silver Plus 4.2 (with loom drivers) so this part is all ready and good to go!  I suspect that I may need to download some files from Louet but have been waiting for people to get back to work from attending Convergence 2012 in California.   I guess I should start considering a draft for the first project.  I'm not sure what it will be but it will be using all 16 shafts! 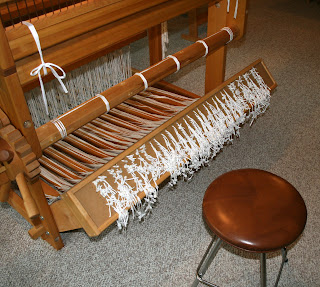 This has been my 'other' seat in the studio. The final portions of the Woolhouse Tools loom ( Emmatrude) tune up were resumed. To refresh, all cords were removed and then replaced with some help from friends.  Now all the cords must be set with a marker thread to indicate where to place the peg when pulling cords for a tie up.
How do you determine the 'sweet spot'? Glad you asked! 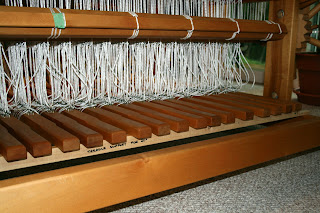 You raise up all  sixteen treadles to their correct height. I have a special board made by hubby for this purpose. 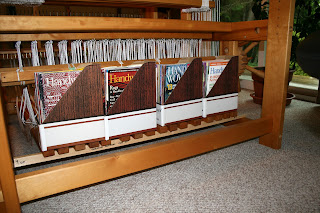 Then you add weights to the tops to stop them from any movement either up or down. I reckoned about 15 years worth of Handwoven should do the trick! 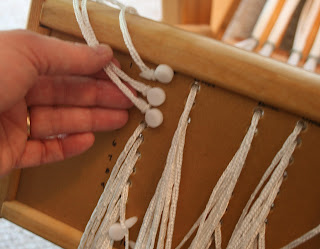 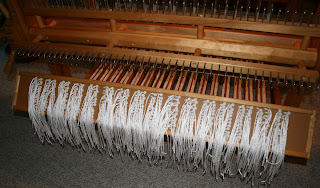 Then, sitting at the back of the loom at the peg board, you tug firmly on each and every cord and slip the peg into the best possible slit on the texsolv cord. Ideally there should be no slack at all.  So you do this for all 384 cords. I let it sit pulled taut like this for a couple of days and then double checked. Sure enough, there were some that had loosened a bit and I snugged those up again.  Texsolv is not supposed to stretch.... but it does. Not much mind you, but enough when even one slot equals one centimeter! 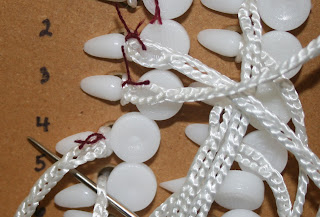 Then, you take some non slippery yarn, in this case 16/2 cotton, in a contrasting colour and you slip a darning needle into each pegged slot. Again, all 384 of them!   Yes, it seems like an awful amount of work but for the quick tie up's to come, its well worth it!!

Even as I do all this work, I know that I will have to repeat it in about six months time. Why? Its that slight stretch in the cord that will happen with use. Eventually the sweet spot shifts ever so slightly and you get a change at the shed. So you pull and remark the cords again and then you are good for some years! Last time the remark lasted four years.   Looms are hard working tools so maintenance happens!

Gosh what a productive studio ! what about Jane, does she have something keeping her from feeling lonely !!

The Drall looks nice, it is such a good draft and usually doesn't present any problems !

Margaret looks like she is just about ready for action !

You have ben very busy all in all.

The dräll looks lovely, I like those classic colors! You've got a very smart system of adjusting those cords, but 384 cords, that's A LOT!

It's good to see a lot of activity happening in the Studio! It won't be long before all three will be warped and producing gorgeous woven pieces. I do look forward to seeing what comes off the Megado!! I'll re-read these pages over and over again to collect the tips for maintaining proper settings on the lovely Gertrude loom. It is always a treat to see this lovely loom!

Good grief, girl, you have WAY more patience than I do. I am VERY impressed.
Tell me, what is your favorite thread for baby blankets?? Do you use 8/2

Thanks for the great comments!

Linda: anytime I go near the big gal with a camera, I think of you! You'll have yours soon enough. You know that yours will look young huh? Real blonde with all that pale wood :)

Hilary: You didn't corner the market on crazy! I have patience for stuff like this... but not much for some folks! Go figger!
I made up some baby blankets for Grandson Ethan and I did use 8/2 cotton primarily. They turned out soft and cuddly. The weft on two was 'Aunt Lydia's crochet cotton" from Wally World. Big 1000 yard cones for $7.99. The tight twist and sheen of the cotton is lovely

Hope this helps...and if you'd like the drafts, let me know.

I like that you like a Swedish author, Stieg Larsson! I know the only woman in Sweden with the name Lisbet Salander ! She is not so in love with the books. She needs secret telephone number and adress. Her life was turned all over after the books became so popular. I can´t read them, I think they are to horrible but I went to see the movies ( I couldn´t let my daughter go alone they are to horrible. But the loom "Lisbet" is beautiful