The Quiet 'Other' Project

Its been a busy time, a busy season so far! Between trips, family visits, doctor appointments and daily chores, my weaving has slowed down around here.  I'm still grabbing time here and there but I definitely have some distractions!

The studio is looking 'fuller': 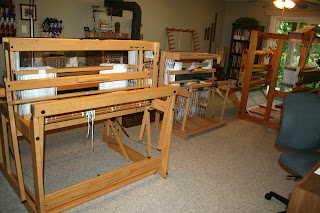 The Megado, which will be called Margaret, has the large single treadle installed in place now and the brake is in place but we're scuffling with the adjustments. It will all work out in the end but just take time to resolve. I haven't even looked at drafts for its inaugural project as yet. Too much else going on!

Do you recall the book mark project?  I left the tie up in place and planned a second project. I do this on the Louet Spring and its conventional tie up system to save my back from being hunched over doing the tie ups. We do raise the loom up on crates and I sit on a stool but its the leaning forward to reach the back shafts 9 to 12 that grabs me.  So doing a second project gives me a reprieve on the tie up, but by the end of weaving it, I'm more than tired of the pattern!

So we start with warp: 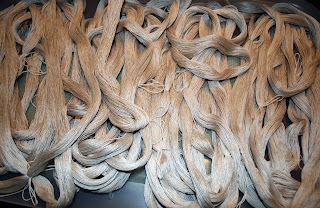 This time its 10/2 mercerized cotton from Webs and the colour is called Shell. My planned sett will be 28 epi. It will be roughly 14.5 inches in the reed. 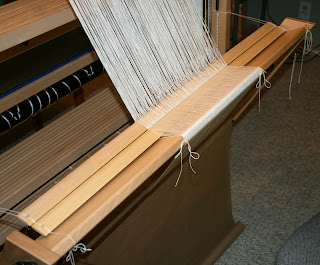 The beaming went well. I really like the Louet method as it works well every time. I used a trick I learned on the Madelyn van der Hoogt DVD and tied cords around the back beam at the far left and right of the warp. Its hard to see as my cord is the same colour as the warp. It's there to prevent any spreading of the warp as its being beamed. It seems that they can creep out a bit and deviate by 1/4 an inch (or more.) It seemed to contain it well and keep it tightly on track.

My first runner I treadled 'as drawn in' and used 10/2 mercerized cotton in navy blue. The picture shows the end of 55" of runner and I've got a spacer in and about to weave the other hem allowance. 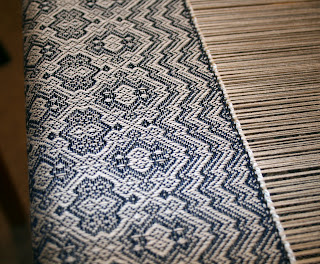 The second runner, still in blue, I treadled the main part of the pattern over and over. I had to pay more attention to where I was in the continuously looping run! 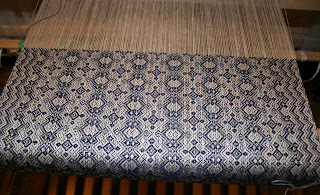 By now I was tired of blue as well as the same old, same old treadling. I got out the book marks and looked at the treadling variations I played around with and chose a couple for the next two runners.

So the next runner I chose cream/ white bamboo and really liked the sheen and subtle look of the pattern: 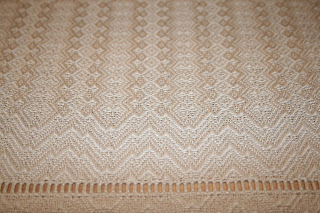 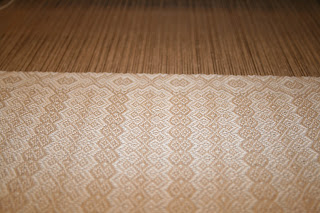 I had to hold the camera at an angle to capture the pattern. Soon it was all over and the loom was empty.
I did my customary serging of the edges and my samples. 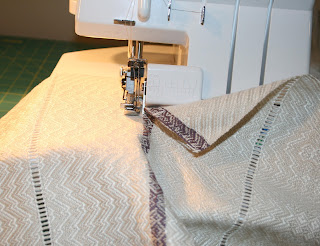 Next up was hand sewing the hems and I quite enjoy having the handwork to do while watching the TV at night. They took me three nights to get the four runners done.  Perfect for reruns.... 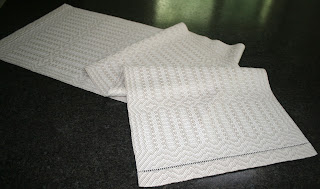 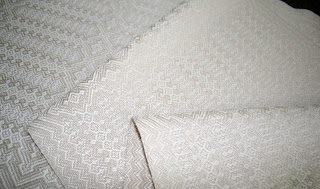 This runner was gifted to friend Margaret. The second cream runner is on the dresser in our guest room. I found a treadling error that I did my best to needle weave in the one missing shot of weft but I wasn't happy enough with it to put it in the sale box.

Next up the blue runners... here's one variation: 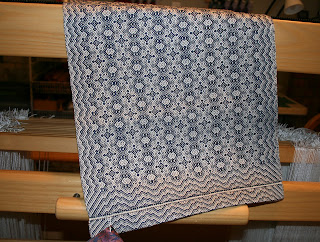 I quickly got another warp beamed onto the Spring and so when time allows, I sit and throw some shots, but not often enough !  I'm not in a panic about the lack of weaving right now as soon enough I'll have another loom loaded and under way and the third will come on line soon after. I can only sit at one at a time so they will all take their turn.  I don't have much for inventory and I am thinking of sitting out any sales this fall. I'll continue to weave and add the box for the following year. There's a couple of very interesting prospects in the offering for 2013! Sure would be nice to have lots of stock!   I'd better get busy.....
Posted by Susan at 7:55 PM

I love the creamy color of your warp, and the runners are beautiful! But I wonder how you manage to keep track of that complicated treadling, it is astonishing.
Greetings from the far North,
Charlotte

The studio is looking fabulous with the three lovely looms!!! I'm glad to see that Gertrude stays with you after all. I think it will be decadently delicious to have to ponder which fabulous loom to sit at each day. As always your projects are stunning!

Studio is looking great. I love your runners. What beautiful colors.

Great looking Studio. Runners look great too.
Louet in Holland is on holiday now until August 10th, so, another wait if you need parts from them......
I was just in time for my order, that's why I know they are closed now ;-)

What!!!! The Woolhouse loom is not being sold???

And just when I thought I'd have room to bring in my drill press and band saw!!!

Thanks to everyone for their comments. Its nice to get feed back!

Margreet: I heard via Jane Stafford about the entire company holiday break. How civilized!

If Louet Canada doesn't have what we need, then we'll just have to wait. I imagine there will be quite a bit of work to tackle when they get back!

Hi Susan,
I am sitting in envy of your studio in such good order. You are inspiring me to climb up the stairs and tackle my second floor which has become a jungle of loom parts and boxes of thread. Up I go...
The table runners are great. I'll keep them in mind as an inspiration and treat, like the watermelon in the fridge chilling.
Bryan

Once again, your weaving never fails to impress and inspire me. Thanks.

The studio is looking full ! Lovely runners though. Yes, I liked that tip about tying cords on the back beam to prevent spreading. So easy but very effective.
Can't wait to see action on the Megado
D