In Under the Wire

Its been a busy week and I have been trying to get to a blog post. My goal was to get another done before the month was over.... and so here I am just squeaking in under the wire.

First of all, I have been working on setting up a new online store front at Etsy.com and after a steep learning curve I'm happy to announce the opening of ThrumsTextiles.  Its still a work in progress and I'll tweak it as I learn the ropes but the doors are open.  I'll post a link to it on the side bar shortly.

We have been busy at home with getting the gardens trimmed down for winter and putting things away. Its being done a month early this fall due to hubby's knee surgery this coming Friday. In fact we have been tying up a lot of loose ends (and one was waiting on us for nearly 30 years!) Feels liberating to be crossing things off a 'to-do" list.

We also did a fast and fun trip up to Comox and had a lovely dinner and overnight stay with Lynnette and family. We did take our cameras along but we got to gabbing and such and clean forgot to take them out.
They have done a marvelous job of landscaping their front and side yard and the new trees and shrubs looked wonderful.  There is also a custom built garden shed and pergola and plans for much more. They will be harvesting veggies from their planned garden in the next year or so and shaping the yard for their needs.

Despite the light rain, we stopped at Goats on Roof in Coombs. We had a nice lunch and browsed the store for all kinds of goodies and I *loved* the British Foods section and loaded up on some of my favourites.

It was such a nice diversion from all the ongoing work around here, and the inevitable worry of a surgery!

So weaving news? Well, I'm hemming waffle weave towels right now. I have six for the inventory and one (with the only treadling error) for us and our kitchen. Anyone who looks at the towels in my kitchen drawer will think I 'm a lousy weaver as they all have a mistake! 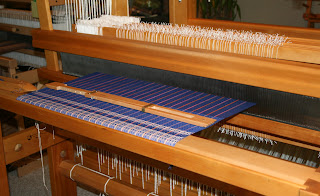 The project was roughly eight yards long and so the view was the start (above) and then for many days, this: 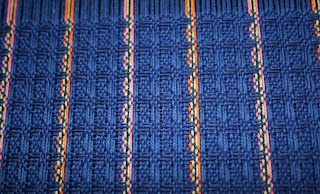 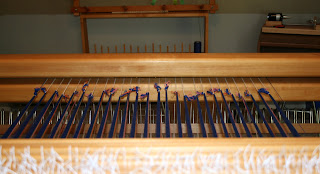 ...finally I saw the knots come over the back beam. You put a big push on when when they appear! Apart from running out of my royal blue and having to order more yarn (forced to in fact!) it was uneventful weaving. Of course the new blue did not match the old blue but I had placed markers in where the change occurred. 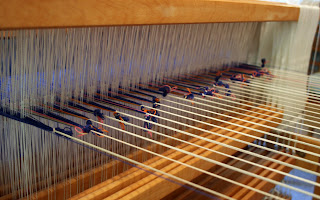 How's this for maximizing my mileage?  The cut ends on the loom waste measured  six inches, plus the tie on portion and it came to twelve inches total. That's the best ever! I  budget 21 inches for loom waste in the planning so the extra inches woven was a bonus. 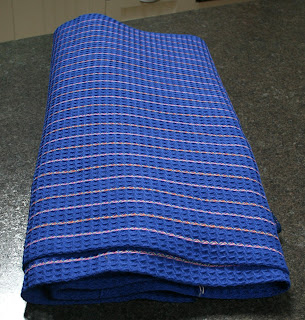 You know, its hard to convey in pictures or words the nice hefty bolt that came off the loom! I could run it down a hallway and try to photograph it, or make it into a nice roll like the one above. I wish I could share with you the weight of it and the evenness of the  pattern when it  runs continuously. You just want run a hand over it.

One spot that was visibly different was the colour change: 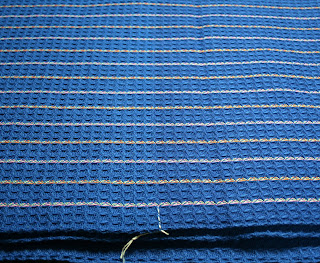 The white markers show the transition line. The new yarn was a darker blue, and actually I liked the two blues mixed together like that. It was richer somehow.  The plan was to pull a couple of threads every 34 inches and then cut the towels apart using the serger. That had to change when I pulled a couple of threads and couldn't see where I had done it! The long floats of the weave structure camouflaged the line. So I resorted to measuring and snipping the edge where the line was. With the nice tidy rows and boxes, I had built in guide lines! 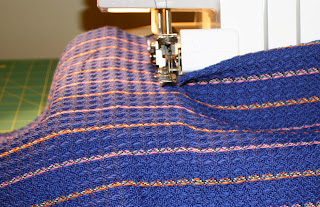 Once serged apart, I folded and pinned the hems. On the towel that is for us (the one with the goof up) I machined sewed the hem. I discovered why I don't sew or make my own clothes! Even with tidy guide lines in the fabric, I can't sew a straight line to safe my life.  :(     The other six are being hand sewn and I'm half way done. I'll post a quick show and tell in a few days when they are ready. 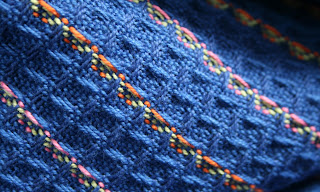 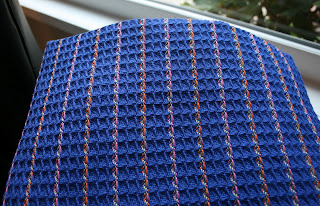 Here are two close up's that seems to show the weave structure nicely....

Okay, now that the warp is off the loom, I raised the treadles that were used in this project and then weighted them down from above. 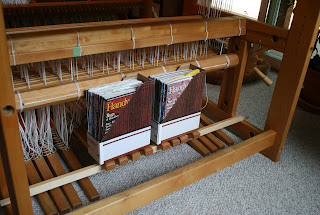 Its only the eight treadles and eight shafts used  that need tweaking. The treadling has stretched the active working cords. Not all of them, but some, and that's enough to be a big pain  when weaving the next planned project. (and no, I'm not telling yet!  :)
I purposely chose a darker colour for this warp so it would hide possible skips as the shed was a bit wonky in some places. It can be for a time until you have worked out the kinks. Its a hassle but  well worth it for the  5 to 10 minute tie up's!   The towels warp was a break in project! 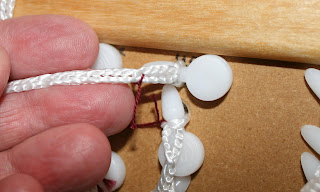 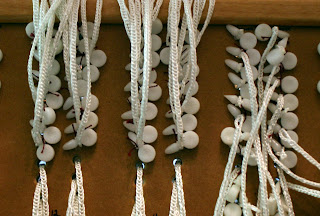 As you can see  the shift is as much as one whole hole, and there was even one cord that shifted two. One hole equals one centimetre (or roughly a quarter inch) Those differences add up at the shed zone. I would remark the spot and snip the old tie off. I only checked the actual cords used so it didn't take long.

Well, if you see a waffle weave come up in my pictures at some point, you'll know why. I've been wanting to give it a try and your towels are lovely! And good luck to you and your hubby on his coming surgery!
Karen

The towels are lovely. I think a lot of us weavers have such drawers in their kitchen. I know I do :-)

Your Etsy shop looks great, better than mine haha.

Lovely run of towels, Susan! I have yet to weave waffle weave as well, so am inspired with each project I see on the 'net. Your work is always especially inspiring. You've done a fine job with the Etsy site, and I love that you're pricing your work in a way that is fair to the consumer and true to the quality of your efforts. I am sure you will do well. Your work is so very beautiful!

I will keep you and Bruce in my thoughts as he heads into this surgery chapter. He's in good hands for recovery in your care.

I love your color choice for these towels, Susan.

And, I am relieved to finally learn that I am not the only person on earth who cannot sew a straight line. I can mark my fabric, use every guide tool known to man and still not be able to do it, no matter how slowly I sew.

Susan, the towels are lovely your colors are perfect together. Waffle weave is fun to weave isn't it. Please give my best wishes for a speedy recovery to Bruce. Pet Miss C for me!

Lovely towels and great colors! I love waffle, it's so nice to weave 3-dimensional structures.

Congrats on getting an etsy shop up and running - and two sales already too!

You must be running on fumes!

I know you've had an extremely busy few days and still you managed to get Susan Harvey Textiles up and running....good on ya!

beautiful towels i just love being inspired every time i read your blog :)

Great post and the new Etsy shop looks great, the pictures are so well done but I do appreciate how much work that has taken !
The blue tea towels are lovely and waffle weave makes them so absorbent. You have put me in 'the notion' ! I need to do some before Christmas.

Hi Susan - I have been trying to get a comment through to you, but can never read the stuff they want one to duplicate so they know I am not a robot. Love the tea towel material, they will be beautiful. Love your new Etsy store, that should be quite successful for you. Pictures are beautiful. Good luck to Bruce on Friday - will be thinking of you both. Weaverly yours ... Barbara

I am intrigued by waffle weave. Will try it some day soon.

Your Etsy store is lovely! The photos of your work are beautiful.

Give us a brief update on Bruce, please.

All the best to you and Bruce as he recuperates.

Lovely towels. I must put waffle weave on the list. I would imagine that there is nothing more satisfying than your own bolt of handwoven fabric. Well done.