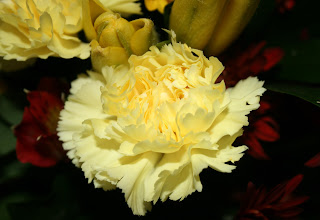 Bruce came through his surgery very well! In fact, he hasn't been the total invalid I was expecting. He has good mobility and went from crutches to cane in twenty four hours, with minimal swelling. The trouble is, he's feeling so much better than anticipated that he tends to do too much and then... well, you know how this ends!

The flowers were a sunny get well from friends Lynnette, Michael and Ngaire! Simply beautiful... 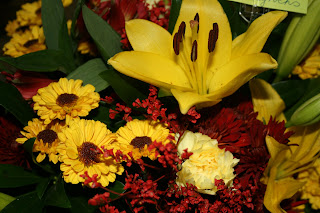 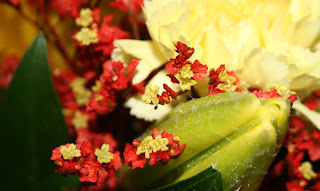 I love the little green/ yellow flowers, inside the red ones. They are so dainty. The whole bouquet is red's and yellow's with lush greenery.

Another conclusion is the much promised  waffle towels. It took me far longer to hand hem them as the royal blue was dark to work on at night so I had to sit and do some of them during the day. The old eyes aren't as sharp as they used to be!

So for folks seeing this post first, there were two others related to this   here and  here. (The draft is at the first.)  I don't normally take this long but its been a busy fall! 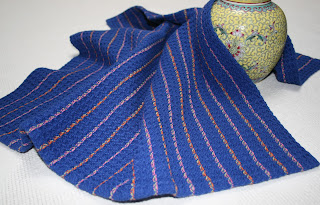 I haven't woven waffle weave in many years and I must add some thoughts and feelings about the project.  Weavers normally weave flat cloth, so this waffle weave was a delight! The pattern took shape on the loom  and once the tension came off, the squares started to form right away. Laundering deepened them considerably and the cloth was springy and soft. Really nice to touch and squeeze!  The shrinkage rates was understandably large. I allowed for 30% in both warp and weft but will allow more in the length next time. The yarn used was 8/2 cottons sett 24 epi.

The project width on the loom was 25 inches and final width is 21 inches. I cut the towel lengths to 34 inches, then with a small one inch hem at either end, the final length was 27 inches. So greater shrinkage in the length!  The towels are a decent size (I like them large) but I would prefer more length next time.  I would allow for 36 inches per towel next time. Not much more but enough to make a difference! 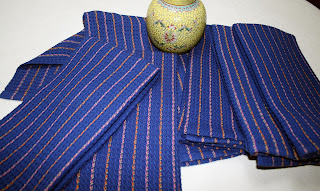 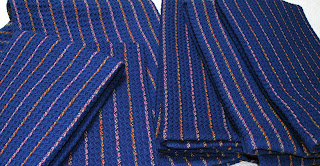 You can see the difference the slightly darker blue made in the second picture. Can you spot them?  I'll be posting these towels to my Etsy shop for sale. Now,  I like blue, but I think I'll leave move onto other colours for the next project!

So the next up and due to be woven off next is ....(drum roll please).... more towels!  I have the turned twill towels on the Louet Spring to get busy on next.  For a quieter, slower time of year, I seem to be challenged to get time in on the looms lately!

I'll leave you with a picture of one of the fall crops in from our small orchard: 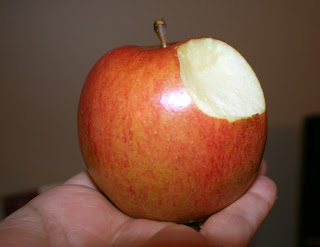 Cold, juicy and crisp! And as usual, the squirrel horde got all  the hazelnuts...

so glad to hear hubby bruce is on the mend :) love the new look on the blog and of course your towels lovely!

Glad to know Bruce is doing well !
Tea towels are lovely, such a deep rich colour. Wonder what will be next ?

dchaketContinued good news from the Harvey front is good to hear. Good for Bruce as well as you!! I do love these towels! I have yet to do waffle weave; not sure why. This lovely project brings me that much closer to finally putting them up on the loom. Continued good progress wishes for Bruce, which will pretty much guarantee some more good weaving time for you. Always fun to see what you're up to!

Your waffle weave tea towels look wonderful! I've got a little confession to make ~ other than in a workshop I've never woven waffle weave....for me it's been one of the 'getting a round tuit' weaves, so it's especially nice to see yours all finished.

Great news that Bruce is doing so well! Hopefully, he is giving the knee time to recuperate - one gets fooled when there is not a big incision - he needs to remember they worked on the inside, and it does need time. I love the waffle weave tea towels, I have not tried waffle weave, but do understand there is a lot of take up. Frost on the pumpkins here on the East Coast this morning. Weaverly yours ....

I'm so happy that Bruce is doing so well.
I love both the towels and the flowers.

A bit slow catching up on reading.
Very glad to hear Bruce is on the mend. I'm so happy I don't need surgery.
I know what you mean about threading needles and being able to see where to put the stitches. At times I resort to wearing two pairs of glasses, one on top of the other!