Slipping into a new Season

There is a nip in the air in the mornings now, and even a whiff of smoke as our neighbour lights up his wood stove to take the chill off the house.  A bit early as its still August!   Then you notice the bracken ferns are turning gold, some trees are already making the shift, and geese are flying over head in "V" formations!

I love the richer golden colours that come with Autumn and so when I was digging around in the stash I pulled out some autumn tones. 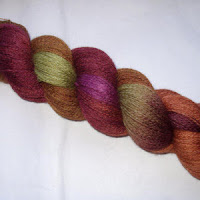 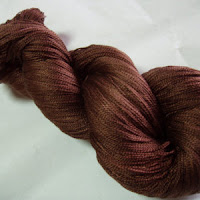 I was waiting for a yarn order to come from Brassards in Quebec and thought to weave off a single scarf real quick (well, as quick as I can go right now  :)    I used the lace weight alpaca / silk blend as warp and it sort of self striped itself as I wound. A regular colour pattern  repeat.  I wanted to  keep the colours in the warp lengthwise. So for a weaving draft, I used an 8 shaft Drall which was quick and easy to thread up and even tie up. 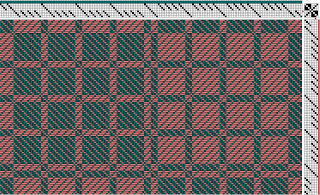 The weft is 20/2 silk in a nutmeg brown and the weaving was much different to my usual fare. I had to gently press the weft into place and be careful of the edge threads and drawn in. The end delivery shuttle was crucial with its adjustable tension. I also used  a wider 8 dent reed to minimize rubbing but I did have some some breaks. So my intent to "whip a scarf off" turned into a slow motion press and change sheds. 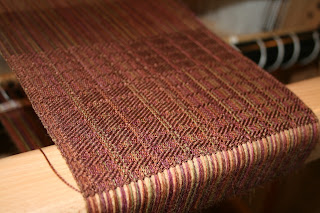 It was quite different to anything I have woven in some time! Especially the colours... 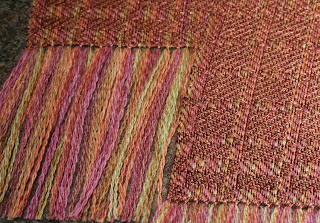 Then it was done and I decided to leave a fringe over twisting to show the original colours. No beads also as this could be for either gender. Hubby was eyeing it and checking his closet for something to wear with it (seriously!) 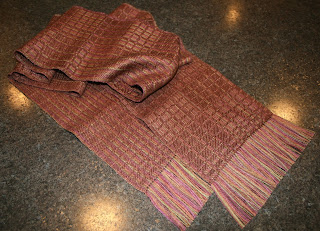 Excuse the light spots.... it decided to rain today and I had to turn on all lights and use the flash. 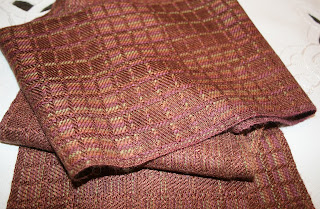 Here you can see the traditional squares of the drall pattern

The yarn order has arrived and I'm busy winding the fine 16/2 warp for the commission order and doing some weaving on the big loom. I've also been 'paper' planning some projects to come: more lace and more of the recent 12 shaft magenta project (again) as I have sold both scarves and three of my four on hand shawls! I'm not sure what is going on, but it seems the Christmas shopping season has begun.

In other news...
We have begun our usual fall chores: windows cleaned, doing yard tidy up, and have booked our annual hedge trimming for October. Tonight we had our first really drenching rainfall since last June. We actually turned off the television volume to check out what the noise was and realized it was rain drumming on the roof!

I'm also officially on the wait list for a full knee replacement and my name should come up in 6 to 9 months.
What shall we talk about then?   Hope you're not squeamish!   :)

Like you, I love autumn and its seasonal colors. The scarf is beautiful, as is all your weaving. I can understand your husband eyeing this particular scarf. Hope the knee surgery comes sooner rather than later so you can get past it, and enjoy next summer.

Hi Susan - I am loving the scarf with the different colors in the warp, as you say - much different from your usual style. It is beautiful and I can understand why Bruce is "eying" it. Yes, Fall is in the air, I love this time of year - getting my pruners out to cut back the tremendous growth on shrubs, hedge, etc. We have had a beautiful summer, and we were fortunate enough to have some really nice rains. I hope you don't have to wait too long for the knee replacement, hopefully you are able to do some exercises to get the leg muscles as strong as possible - this is important pre-surgery. Enjoy the Fall. Weaverly yours ......

Beautiful fall colors and scarf!
I can see why your husband wants it!

The color palate of the drall scarf is wonderful, lucky Bruce! Get out and enjoy the crisp fall air, walk a bit and enjoy. Sorry you have to go through surgery but hopefully you will mend quickly and be pain free from now on. hugs to you and Callie

I really like the new background on your blog.

A nip in the air? Ferns turning gold? Ahhhh....it all sounds like a dream! :-) I can't wait for cooler weather. We've been stuck in such an awful heat wave and I'm so done with it! Ugh! Your weaving is gorgeous! Have a wonderful Wednesday!

I love the Drall scarf! Please send us cooler weather! We are still at 107! We can't take our kids out for recess, we get a little squirrelly in the afternoon. Fall is the end of November in Arizona.

Hot in Colorado too but the colors in your scarf would be great with our sun-scorched grasses and wild flowers.

Jeannie|: not sure I understand you but the draft is as shown. 8 shaft, 8 treadles. No tabby

I don't recommend tabby borders anyhow with a twill as plain weave spreads the warp. If weaving twill towels or whatever, use a simple twill treadling for hems etc.

Hope this helps... If not, write again.
Susan

Pretty scarf and that Drall draft is a great 'go to' for a quick weave !
We too have geese arriving, I'm sure they get earlier each year !
Enjoy the new yarn !