Steady as She Goes


September is here now and it shows in the gardens and a change in the weather.   I like it... fall is one of my favourite seasons.

The studio is still busy but there is a slower pace now.  I would love to get  into weaving for Christmas but my knee says "not so fast there !"   So I back off and take breaks. If I take it easy, then I get to weave longer over all. That's better than no weaving at all.   You don't need to tell me twice!

So I multi task in the studio. Wind a warp for a spell, sit and do some paper work and project planning, weave for a time and so it goes. Right now there are several things under way.  I have three warps wound for future projects and two more to go. I'm an optimist!  There's a second scarf being woven off (on a warp for two) on  the big loom and they are coming along nicely (more on them another time...). 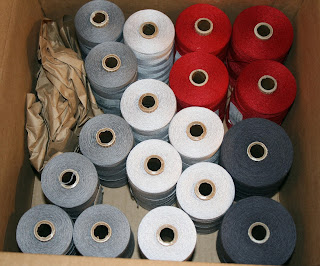 On the Louet Spring there is a start of an Etsy commission  for two runners. Naturally, I didn't have the colours they requested and so had to place a yarn order with Brassards.  So what you see there is the two shades of gray 16/2 mercerized cotton,  two cones of a new shade of steel gray 8/2 cotton, and some lovely deep, deep red 9/2 linen from France called "cerise"  (cherry).  The linen has already been wound into a warp and waiting its turn in the line up.  Well, I thought I might as well make the  best of the shipment. My sample book was dated 2008 and out of date so I treated myself to a new one: 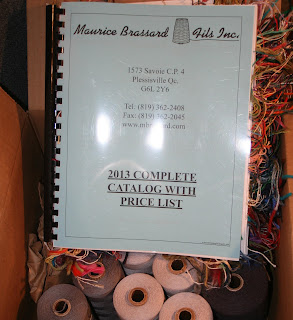 Can you see the tangle of sample yarns hanging out? Its an amazing collection of samples. Best. Deal. Ever.  I use mine a lot just to compare colours and even yarn sizes. I write setts into mine and make notes. Its a work book.

My client, Jeff,  will be following the progress of his runners here so I'll be showing the stages in more detail. 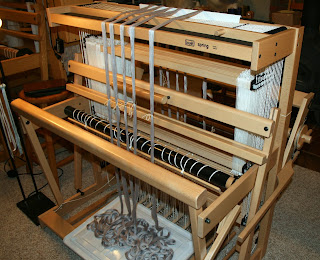 Here the loom is viewed from the front and the warp yarn is ready to be wound onto the loom. Its loaded onto the back beam in a series of simple steps. 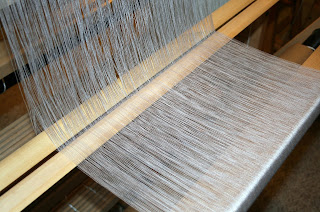 The yarn is spread on the lease sticks that support the warp and its kept at a given width by a built in raddle on the top of the loom. Once all is in place, you wind with brown paper to separate the layers. Tension is applied as you go to prevent any soft spots! 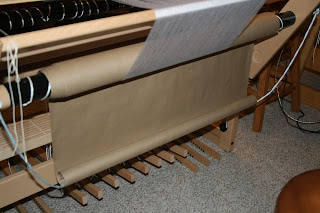 Here you can see the warp being wound on with the paper in place. My weaving readers: notice the cord through the paper roll. If you leave this in place, it can also serve to roll the paper up neatly as you weave!  No more rolling on the floor and getting in the way of the treadles... 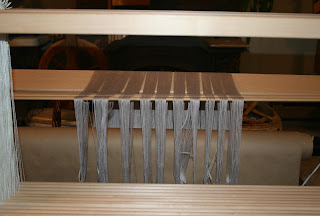 This is the view from the front of the loom. The warp has been wound on, the warp ends released from the raddle and the ends left supported by the lease sticks. Time to thread the loom. The pattern of the cloth is shaped by the way in which you thread the heddles (or the white stringy bits) to the left. It can be simple (1,2,3,4 etc) or it can be more complex. In this case, it was a bit more involved. I'm using eight of the twelve shafts available so not too involved. 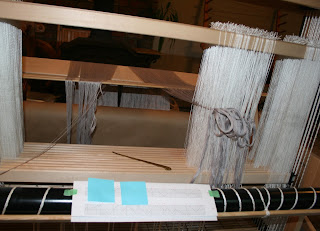 In this picture the threading is half way and you can see my threading guide where I leap frog with my post it notes to keep my place. I listen to podcasts while I work or some nice music.

Once done then the beater bar assembly is place back on the front of the loom and its time to sley the reed: 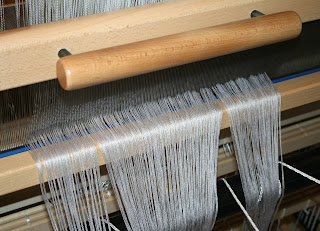 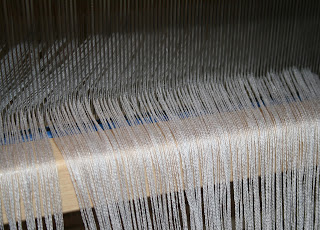 The reed does two jobs in weaving. First it determines how dense the cloth will be. This reed is a twelve dent reed which means there are twelve bars or vanes in every inch. I'm placing three warps ends through every one so my cloth will be 36 ends per inch (or epi)  Weavers keep different reeds of varying ends per inch so they can produce cloth of varying density. The reed  also becomes the beater to compact the weft yarns as we weave.

I found that I had done a double entry in one dent and so had to go back and move everything over one slot.  Tedious? you bet!  I normally take the threading and sleying slowly  and double check as I go to avoid mistakes. I'd rather catch them here then later.... 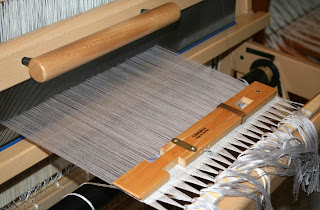 Then I tie onto the front rod of the loom and weave in some scarp yarn to test for mistakes and provide my base for the weaving to come.  Here you can see my temple in place to reduce draw in already as this is rather fine yarn. 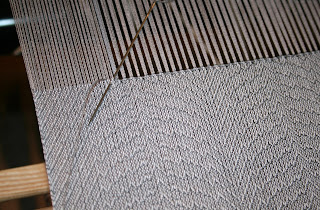 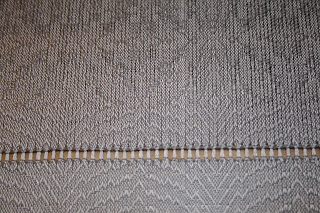 Once that is done, then the main pattern is under way.... I got about seven inches woven and called it a day. I uploaded these pictures and noticed something that I could not see on the loom!   Do you see it? Just to the right of the centre of the picture?  There is one slot or dent that has four threads and not three like the rest, and it shows as being more dense in that spot. While it demonstrates my earlier comment about the reed determining the cloth density nicely, it presents me with a problem. It will show as a stripe through the entire runner.

So I sat and cut out all the weft yarn and took it right back to the the start again. I'll be resleying the reed today all over again and being very careful with my counting as I go!

Tip for Weavers: taking a picture of the cloth and having the flash hit it can show you any errors you might not see. Good to know! I normally take one to show me how I started a project, so I can reverse it at the end. I also write notes on what I do but sometimes I can't read my own writing.

So, Jeff.... how did you like your gray Gothic Diamonds for the short time they were there?
Posted by Susan at 11:53 AM

Hi Susan - Now you see it and now you don't. This runner is going to be beautiful. Very interesting how the flash of the camera caught the mistake the naked eye could not see. Interesting tip on a very fine warp. I am pleased to hear that you are listening to your body, and you are correct by taking that approach, you will probably get more done in the studio. I too love the Fall - it is so beautiful with the leaves turning and the temperatures going down a little. Weaverly yours .......

Nice post and lovely runners, or at least they will be when you get that error fixed. What a fiddle !!

Great to have a commission and an excuse to buy new yarn !

It's *perfect!* The colors, the diamonds, ...everything!

I tried to post on your blog, but it wanted me to have either a Gmail account or my own blog account (of one variety or another).

Those runners are going to be gorgeous!!! Your work thus far is gorgeous!!! Thank you for this update! I hope all is well with you.

Hi Susan - I put a link to your blog on my blog today - the picture will tell you why. after reading Jeff's note I thought I'd let you know Blogger is up to its old tricks and seem to be blocking most comments that don't come from a blogspot user. I have learned to outwit some comment formats but not all. Stay well.

Hi Susan, great to see you at the loom. The runner is going to be wonderful and the grey on grey is a stunner...very urban chic! I think it's lovely that your patron is able to follow as you weave ~ what a great way to get involved in the project!

Hi Susan looking forward to seeing your new runner, a heads up with the cerise linen, I bought some from Brassards and wove it with white cottolin and it bled very badly, so I would suggest you test it if you are using white with it. cheers

Thank you Kathleen! I have wound a warp and the project will be all cerise linen, warp and weft.

Reds are bad for bleeding!