This is part two of my earlier post  detailing a weaving commission, so if you're running behind, you might want to catch the first part.  (Details and draft are there)

I've been quietly beavering away on a customer order from my Etsy shop "Thrums Textiles" . They requested two runners featuring the Gothic Diamond pattern, except these were to be hemmed and longer at sixty inches.  Also to be in two shades of gray.....

So once the small error in the reed was corrected, I got started again and I must say that the weaving went very well. I think the help from Bruce in tensioning the threads as the warp was wound  was the key to nice even tension. There was no issue with soft edges, and the only issue I had was that the floating selvedge thread broke a couple of times on the right hand side. (It always seems to be the right side. Any theories?)

I wove both runners to approximately sixty two inches and both had a six inch hem allowance, which will reduce to two inches on either end when all complete.  I even got some nice samples at the end for my records.

Now, normally I like to cut my new projects apart using the serger, but the bunching of the serger threads can add a line of bulk in a fine cloth made from cotton this fine.  So I had to take a different tack with this. 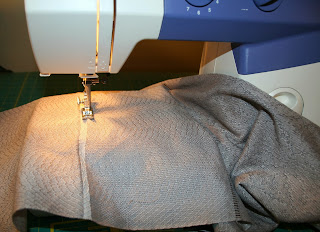 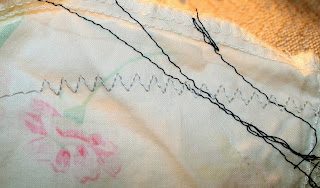 I switched to the sewing machine instead. What I need to do is stabilize the edges to prevent unravelling so I used a stitched zig zag. In the second picture you can see my scrap cloth with the silver stitches as practice.
(Click on any image to enlarge). It worked very well! All was secure and no bulky line.

Next up, getting the hems ready: 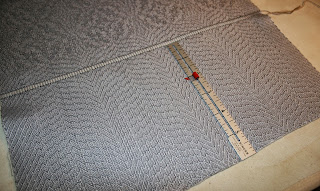 Steam press and check length is even. 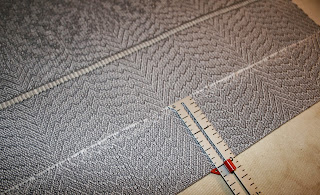 Fold up to an even two inches and steam press again. 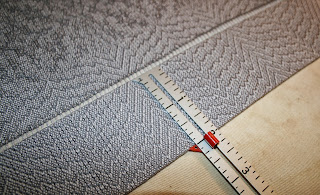 Fold up final fold to *just* to the bottom edge of the hem stitching, steam press again and pin in place.
Now they are ready for s little evenings entertainment! 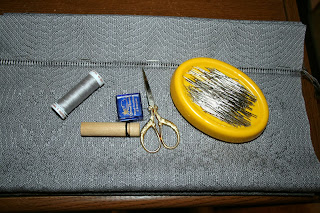 The stitching was rather fine and so it took me time and (surprise) daylight hours only. I just about went blind trying it by night!  {Here is a link to what I do.} I soaked them in hot sudsy water for about twenty minutes and then I squeeze them through vigorously. I want the threads to shift and full and get rid of the reed marks. I did the same again with the rinsing. They were hung to drip dry overnight and stream pressed the next day.

They had to have their time in front of the camera!  Both are identical in width : 13" One shrunk and came in at 61" and the other came in at 62". The hem lengths are identical and so the 'extra' is in the main body of the runner. Its hard to tweak that. 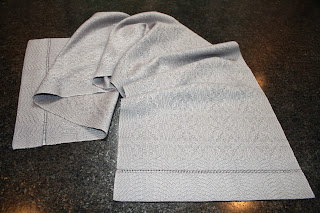 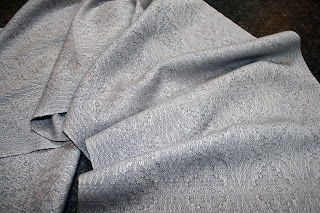 The 16/2 mercerized is so fine and has a beautiful hand. I sett it at  36 ends per inch and its perfect 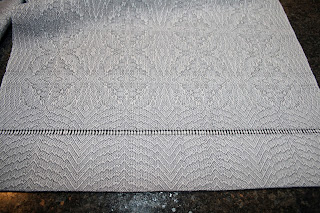 The ladder hemstitching: I used a double spacer and stitched every four threads. 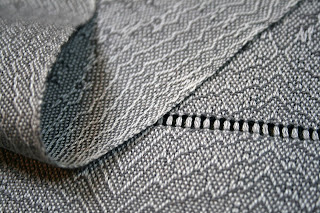 The two grays work together nicely....

So they are being wrapped to go in the post and on their way to San Francisco, California. I visited there many years ago and have wonderful memories of brief time in the city. I can clearly remember our ship coming into the bay under the Golden Gate Bridge and then spending a day ashore exploring. I can remember going through the Ripley's Believe it or Not Museum, looking at Alcatraz through the viewing binoculars, and eating hot buttered crab down by the waterfront.  Great time!

I recently had a warp that gave me the same issue: floating selvedge on the right that kept breaking! I sleyed it with the edge threads, I sleyed it next to the edge threads. I wove with the shuttle exit facing me, I wove it with the shuttle exit away from me. I tried every variant I could think of - I even threw away the yarn and started again with a new piece. I think it knew that I hadn't wanted a floating selvedge in the first place... But the one on the left behaved perfectly. It remains a mystery to me.

Beautiful shawls!
And thanks for showing the ladder hemstiching method.
Greetings from Sweden
maliz

Susan, the runner are super! I was thinking that maybe you might be right handed and through the shuttle a bit harder from that side? Just a theory.

Gorgeous!!! I hate weaving with a floating selvage but when I have to I don't wind it on with the warp...I take a length and thread it through the reed and weight it off the back. That way it moves freely. I don't know if that would help! Your weaving is simply gorgeous!

Susan,
I'm drooling over the photo at the top of your blog. Gorgeous! And of course, same said for those runners!
I'm right handed and used to get the same breaks on my right selvedge. It helped to put a level on the loom (my floor isn't). And on my jack loom (with metal heddles) I gathered the extra heddles away from the selvedge and tied them there. I haven't had any trouble with that since I started using my countermarch and a temple.

Beautiful runners and so nicely finished. What a difference that makes.

Lovely runners, Susan! I think the floating selvedge problem (which I've also experienced) is caused by the yarn twist. When you push the shuttle in over it on one pass and come out under it on the next, you're untwisting it a little each time. On the "behaving" side you're going with the twist instead of against it so it doesn't fray the same way. Ideally you would need floating selvedges with opposite twists to solve this!

Thanks to everyone for their theories on the floating selvedge mystery!

Martha: I am right handed but use an end delivery shuttle which should offset this.

Cally: I've had the inside threads break next to the floating selvedge on past projects. I think the pattern bunches up the threads (or the reed...or the use of a temple) and they are the unlucky ones rubbing on the reed. Not sure how to fix that except to reduce draw in as much as possible.

Cait: my floating thread is loose over the back (as the take up may be different between them and the main warp)

SpinZen: I have texsolv heddles which are soft and so don't rub the warp, but I do keep them pushed back. They can get in the way of my view of things.

Louisa: I had looked at this idea some time before. So with the right hand selvedge, I should be able to cut a length of thread, **turn it around** and then load as per usual and it should be okay then? I would have reversed the twist.

My next project uses a floating selvedge again so I will put your theory to the test!

Thanks... to all commenters for taking time to write...