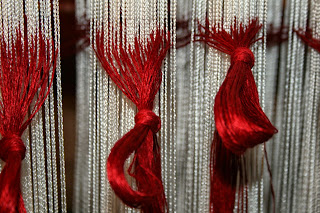 So, with the parcel  with the gray runners on their way to California, the loom is now available for a new project.  I had  something in mind for the 9/2 red linen in my last yarn order from Brassards. Last spring when we were in Vancouver I stopped by my Dad's place and had a nice visit with him. During the time chatting with him, I spotted a small lace cloth on his table that I woven some years ago. It was a fine 20/2 cotton with a huck lace diamond pattern. I had been given the pattern by Linda Heinrich and she in turn got it from Virginia West. It has to be one of the loveliest lace patterns and it went onto my mental list of projects that are up soon. 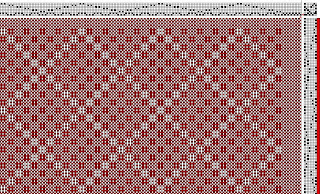 I wanted to weave something Christmasy.... my second ever project with a holiday theme. I had woven some Christmas tree card inserts one year on a table loom that took too long, but did make it out in the mail that year (as opposed to the next!) . I'm not a fan of weaving for Christmas especially for gifts as it can be a recipe for disaster. There is far too much pressure on folks that time of year so why add more?   {Weaving for birthdays and other special occasions is far better as you aren't coping with the "Christmas Crunch".}

So the yarn arrived and I had found my old draft.... project was duly planned and the warp wound.  The 9/2 linen came in at 3700 yds/ lb which is finer than an 8/2 cotton. The cotton is 3360 yds/ lb and recommended setts are 18 epi for lace, 20 epi for plain weave and 24 epi for twills. It gave me a place to start at least. I wrapped a ruler, and I emailed Gudrun for her input as she uses this linen too.   So we finally settled on 22 epi and I thought I could up or down from there if need be.  When it came time to sley the reed I had to do a pattern of ends that meant I had to use a more open reed to get the desired sett. Now my past experience with linen is that its better to use either single ends through a reed or double ends. If you do groups of three or more, then  reed marks can be an issue. I did not want any problems like this so I changed my reed to something finer and got smaller groups. With a 15 dent reed, I sleyed 1, 2, 1, 2 etc. It averages out to 22.5 epi which was darn close!

The runner warp was  5.25 yards long, 14.9" in the reed and a total of 328 ends.  Winding the warp went well. When I wound my pirns I ran the linen through a damp cloth and it seemed to tame the linen and take off a fair amount of lint. 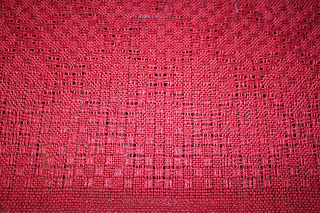 Weaving was pretty darn nice and the sett looked perfect! The weft lay into the pic beautifully, there was very little draw in so I didn't need a temple. Then with plain weave borders, there was no need for floating selvedges either. Very liberating! The treadling was a nice little five treadle dance (plain weave, pattern, plain weave, pattern, plain weave). You very quickly settle into a good rhythm and it wove up at a nice rate. You could also see the pattern clearly already which was very nice.

I planned on two runners, both sixty inches long and with six inch hem allowances (which would reduce down to two inches after folding), and some samples.  I wove one runner to sixty inches plus hems and I had my samples all done. There seemed to be a lot of warp left so I decided to simply weave a longer runner as the warp held out.   The second ended at seventy four inches! 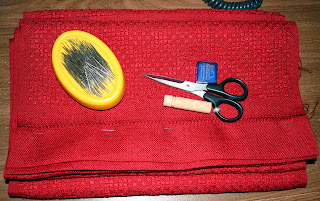 Once off the loom I pressed my hems much like in my last post and pinned them.  The hand sewing didn't take very long and then they were into the laundry tub for the hand wash and rolled in a towel to absorb water.  The ironing was a real workout!  I was pressing as hard as I could and the wrinkles were still there. I found myself lusting after a mangle or steam press like Lynnette's. I just kept going back and over them again until they passed muster.

Time to take some pictures, which can be tough this time of year. We had cloudy skies and trees all around. the brightest place was my big loom and  so I laid a cloth over the loom and tried for some beauty shots. 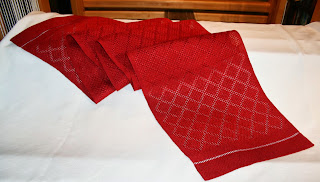 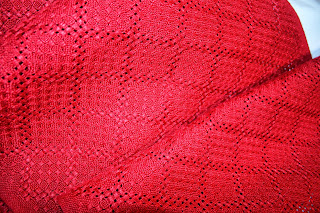 The lace is really defined now after washing and looks stunning....

Photographing all red is almost as bad as all white !   First of all the real colour of the runners is a blue based red and the pictures I see are a bit more orangey. Then its hard to see detail with tone on tone colours.

So I tried to show the white cloth in behind... 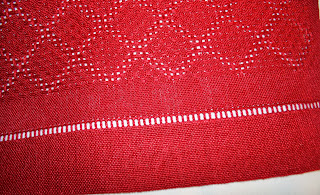 I was arranging and rearranging and trying different placements and shifting the lights around..... and that's when I saw it..... 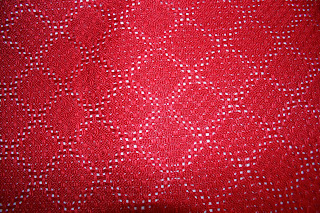 At first it looks like a soft line in the cloth.... 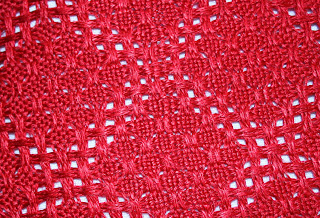 ...and when you look closer, particularly at the corner of the four diamonds. Its a treadling error!  (this one is for you Linda....) . Its the shorter sixty inch runner and the longer one is just fine. That one will be going up in my Etsy shop. The other? I'm not sure what to do with it now.  Keep it for myself or sell as a second? If anyone is interested in buying it, let me know.    Sold!

It really bums me out as I was watching carefully as I wove but apparently not quite enough...    So what's the best cure for this situation?   Another project.... basically move on to something new and start fresh! 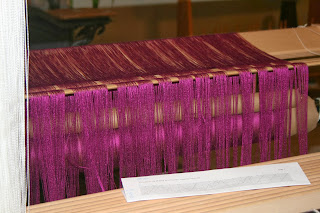 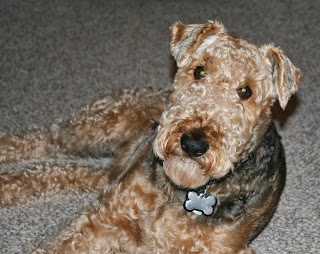 Email ThisBlogThis!Share to TwitterShare to FacebookShare to Pinterest
Labels: 8 shaft huck lace, 9/2 French linen, sucking it up and moving on, treadling errors

Susan, my heart went out to you when I spied that error! Darn it all! Love the draft, care to share it? Pet Miss Callie for me, she is all grown up and a real doll face. Hope you are feeling better.

Thanks Martha.... I forgot to add the draft but its there now.
I think its been used by many and even published in Handwoven.

In other words, its just out there and used by many.

Your comment button on the blog doesn't like me. While it doesn't qualify as a 'dog' (...but Callie is so cute!), I know that this is your equivalent when you put in the focus that you do on perfection. I feel your pain, but probably not so badly.....because it is still a stunning runner. PM me with your price...it's gorgeous! I'd be honored to own one of your mistakes

I can feel your feel your disappointment. I take pictures on the loom to catch threading mistakes but they still sneak in occasionally. It hardly shows but your eye will always go to it. I have trouble leaving comments on most blogger blogs - blogspot has deliberately worked at blocking comments from some sources. depends on how "comments' is set-up.

I'm sorry that Blogger makes life difficult when it comes to posting a comment. If the numbers and letters are too difficult to see then hit the little circle with an arrow and refresh. It will give you a new combination.

I left the controls off last January for one week during an 'open house' event. During that time I received over 60 spam comments and some were plain nasty! I was very happy to put them back in place.
There's always someone who spoils it for the others huh?

I So know how that feels. But frankly, even after you said it was there I had to work at finding the error. It's such beautiful work. So, I'll stick with Calli and say, "cheer up". And I can hardly wait to see what comes off of your loom next!

Gorgeous, gorgeous cloth! I've saved the draft, it looks so lovely and I was surprised to see it is quite simple.
I couldn't see the error, nobody else will ever notice.

That is indeed beautiful lace and a very lovely colour.
Sorry to hear of your treadling error, it is so easily done. Looks as though it hasn't been a problem in the end though !!
Great Christmas project.

What a beauty! This is just a stunning runner and the linen shimmers wonderfully! I love the fact that you make mistakes too, sometimes I feel like I'm the only mis-treadler out there...

Great phone call today, it picked up my spirits and made me want to take down the linen stash and have another good look at it!