A couple of months ago I was playing around with using an existing tie up on my Louet Spring and matching it with new drafts.  Not all were compatible of course but a few twills turned out very nice in the design phase, and one in particular. It was a complex twill with a long repeat and I used red purple tencel, or  magenta for the warp.

{note: rather than me running through all old project details again and the draft again, please use the links provided.  Thanks..}

In that post the two scarves, one woven with dark teal and the second with navy blue, were simply beautiful and I was thrilled with how they turned out. Apparently other people thought the same because when I listed them in my Etsy store, they were snapped up within days!

I wanted to weave more while the tie up was in place but my recent commission order for two runners cut that idea short. But I had a dream to do it again, and soon .... and this time expand the dimensions to a shawl. The scarves were lovely, but a shawl would be ..... well, take a look! 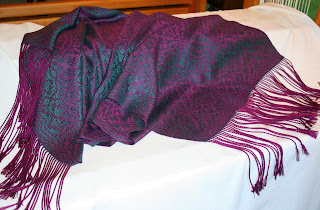 I warped up enough length for two shawls, wove and cut the first one off, and the second one has just come off the loom and being finished as I write with its debut to come next time.

I'd like to back up a bit and take the project back to the beginning...and it started with a yarn order to Webs for more red purple tencel.  When it arrived I noticed a slight change in the shade when compared to a skinny cone left over from last time. It was more 'grapey'. I wasn't sure how the combination of colours would look this time but decided to go ahead with the project anyway.

Once the warp was on, threaded and sleyed, I laced on to reduce loom waste and to ensure no  hassle with slippery yarn.   I also decided to try a new trick I learned from weaver Margaret Coe from one of her posts on a weaving group on FaceBook.   No matter how long  you have been weaving, a new trick is always welcome! Click on any picture to enlarge... 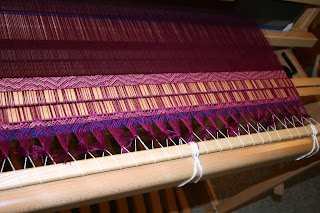 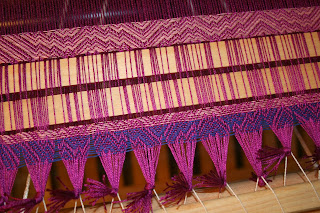 So, here's the start: knotted warp laced on, then three shots of 8/2 cotton and then beat, repeat again... and this closes the groups  up. I wove a couple dozen shots of 1 to 12, then I made a shed and inserted a warping stick, then another. Then I wove a couple of runs in a light coloured cotton. Beating against the sticks was an interesting feel! It was firm and provided a nice foundation. It gave rigidity to the whole width of the warp.
The light cotton section showed that there were no threading errors, which was super!   I could then advance the warp for the fringe allowance.   Now please  note that the area where I did the test weaving and placed the sticks would also be part of the fringe allowance. None of that is wasted!   At this end of the warp, only the knots were cut off later and thrown away. 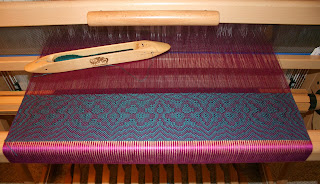 As you can see its working well and weaving up beautifully.  I used a temple to reduce any draw in and as you can see it is sitting nicely. Or was it the sticks that set things up with a firm foundation?  I plan to use them again!

So the weaving continued on for eighty five inches or so and I cut off so I could get a jump start on finishing. I have a sale I'm trying to prepare for and since I must mail things away, timing is important! 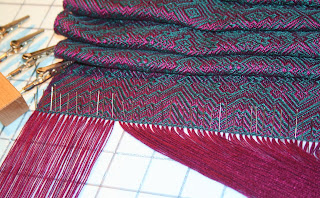 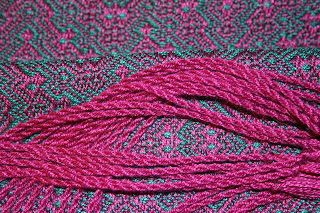 I decided  not to bead as I have no magenta beads even close in colour and very few in teal. Certainly not enough for both edges. This shawl was going to have to  provide its own dazzle...

Next up was washing. I soaked it a long time in hot sudsy water and squeezed it out well.  I spun it out in the machine and hung over a rail to dry. The next morning I gave it a hard press with the steam iron. 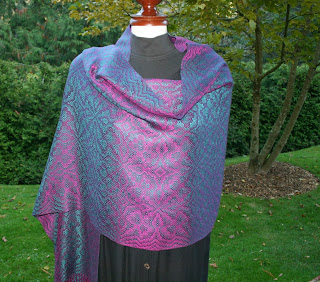 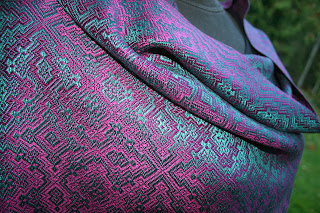 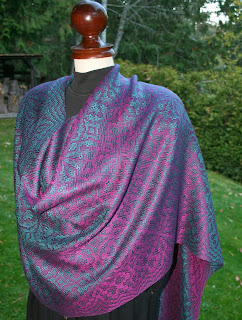 I think the shawl carries the 'razzle dazzle' off just fine. The tencel's beautiful drape and sheen never fails. I can hardly wait to see the next one!

I'm happy to be weaving still even if it is slower. I've heard now that the soonest I can be expected to be called for surgery is April 2014.  There is some good news and some bad news. The bad? I can now expect to have another full hip replacement *first* on my right side, then, a full left knee replacement and eventually my right mid foot bone fusion.  Its all a bit much to process right now, especially since my husband is to have surgery in January.  I keep being invited to a Pity Party, but so far I have declined!

The good news?   Well, I'll just have to take it one step at a time, work very hard at the rehab, count on my hubby and some good friends, ..... and keep being able to weave again as my "carrot".  I told all my doctors that's my goal and even showed them the picture of the recent shawl to show them I'm serious.  :)

Its what I truly love to do...

I've woven a number of what started out as Snowflake twills on a point threading -- I now wonder if I'm using the right name! They look so similar to your wonderful scarves and shawls.

Hi Susan - your teal/magenta shawl is just beautiful - put that up for sale, and you won't have it long. I suspect your customers check your site daily to see any new items. You have such a great mind-set for your upcoming surgeries; and you are right physiotherapy/rehabilitation is the key to a successful operation. The surgeons do what they do best, but it is up to you to make sure you work hard at the physiotherapy/rehabilitation. Your family and friends will also be a tremendous help. So, it seems 2014 is going to be a surgical year for both you and Bruce. Keep in mind, "one step at a time". You will get through it and be back at your loom in no time flat. Weaverly yours ... Barbara

STUNNING!!! But then that's no surprise - your work always is.

Your comment button still isn't talking to me. Another signature piece, Susan. And while your beading is always the icing on the cake, you're right...the iridescence in this piece holds its own quite well. I'm sure this will be snapped up in no time! Just beautiful!!
Linda

That is the spirit Susan. Beautiful shawl!

So beautiful! You must get so much satisfaction from creating something so lovely. It will be a challenging year ahead for you, but with your positive attitude you will soon be looking back on it as just a bump in the road. Thank you for sharing your triumphs and your challenges.

Beautiful shawl! What is the name of the FB group to which you refer?

See you there...
Susan

A beautiful shawl Susan, the colours do really well together. I don't think it needs beading, there is so much interest in there already. Should make a nice Christmas present for someone !