Waiting for the Sunshine

We had a spectacular summer with record breaking hours of sunshine. Now its Fall and I've been waiting for a just few minutes of sunshine to take some pictures. Our house is surrounded by tall trees so this time of year the light is a rare commodity. Yesterday morning it appeared and brightened up the studio so I dashed in there and started snapping away. (Good thing I did too as the sun hasn't appeared again since!) 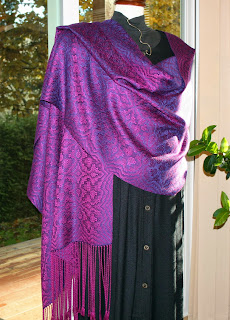 I will be sending away a number of my handwovens to a sale held by the Shuswap Spinners and Weavers Guild in Salmon Arm, BC at their  beautiful and historic Art Gallery and the shawl went from here, to being folded and packed away. This was my only chance to get some pictures of the shawl as it might not come home again after the sale.  The low lying morning sunshine lit the whole studio in a golden glow. It just invites you into the space and encourages you to take a seat at a loom and start weaving.

The second shawl is the same magenta as the first but this time I used  navy blue 8/2 tencel weft.  There is some iridescence but its not as prominent as the dark teal and magenta shawl. This shawl is more subtle. It makes a statement but it leans more to quiet elegance. 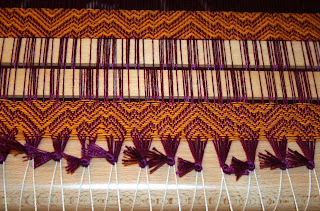 Once again, I tried the sticks at the beginning and again, it worked beautifully. The scrap gold cotton above the sticks just lined up neatly and it even seems to minimize draw in.  Once under way, I did use a temple as I don't like the floating selvedge being rubbed and fraying through. This was more of a preventative and it seemed to work! 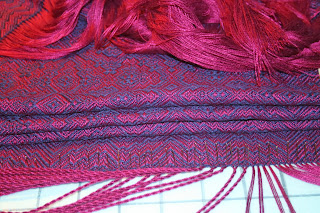 Twisting the fringes took some time and again, no beads. I do have some fine fine navy blue seed beads but it just felt better that the two shawls stand on equal terms together. Does that make sense? 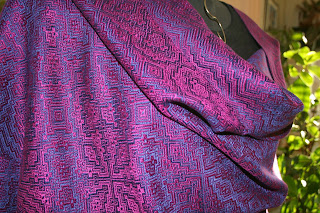 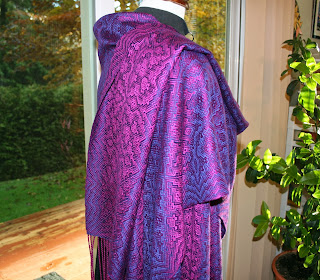 You can see the iridescence in these two pictures above.

I'm going to weave another shawl like this one again, but for me... and in time for our 30th wedding anniversary in 2015 (if not sooner!) There better be a party for me to go to wearing it,  or at least dinner at the Empress Hotel !

Another warp has gone onto the Louet Spring...     I have an inquiry on the Woolhouse loom for sale which *may* blossom to something nice for both me and the potential buyer. Nothing concrete as yet. So, please continue to spread the word!

Some parcels arrived with more goodies. These warps were meant for the Woolhouse loom but they will keep in the queue for the Louet Spring. 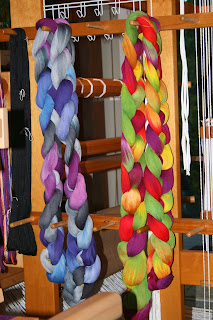 These are painted warps by Kathrin Weber's  Blazing Shuttles  and her  FB Warp of the Month Club.  They are 8/2 hand painted cotton and you are looking at October's "Winter Blue Berries" on the left and September"s "greens, golds, magenta and rust" on the right.  Quite different and I love both for many reasons.  Click on the links to learn more about the sizes available and more about this growing on line business!

These will evolve into kitchen towels and one will most likely be loaded just before my first surgery in the spring. The simple act of a simple treadling pattern will be therapy much like last time when I got a hip replacement (which was 12 years ago on November 7th! Has it been that long already?)  I want to insert  8/2 black cotton 'dividers' to delineate the towels, work with a structure and make the colours pop.  The threading and treadling must be a straight run for ease... and pattern in the tie up. I'm thinking my old friend "breaks and recesses". The weft colors would be any colour you see in the warp. Just an idea and I'll look around for another possible draft.   If you can think of something you feel fits the criteria (easy straight run treadling, 8 shaft preferably and something that shows off the colours!), please let me know in the comment section. Thanks!   I'm leaving the warp bundles hanging up as I love the punch of colour in the studio.

I'm going to load up the Jane table loom as well with something simple in case my lower half isn't cooperating with post op rehab and my urges to weave again and Now!   I'm going to set up the tablet cards and maybe even the inkle loom so I have all the bases covered.

{Now having said that, I'll probably be laid up on the couch watching Netflix marathons and re-watching all three movies of the Lord do the Rings!}

Oh the wraps are stunningly gorgeous. So much going on in their own right I think beads would have been competition rather than compliment-ation.
Painted warps are great eye candy, especially as I thread white cotton.

It´s so beutiful. Ilike it-
Birgitta

I'm a handspinner, and at first glance, I thought those warps were braids of painted roving. I am a VERY newbie weaver---I have a little Cricket rigid heddle loom, and I have been having fun spinning painted rovings into yarn for warp and weft. My little loom is only 10" wide, so I'm pretty much limited to scarves, but I am having more fun than should be allowed choosing rovings, making the yarns, and then seeing how the colors blend (or not) in my finished projects. And even though they are just simple tabby scarves, it is gratifying to wear real fabric that I wove on my loom. I am always inspired by your pictures of weaving in progress and your finished products.

The shawl is stunning!
Those painted warps look like they're going to be fun to weave - can't wait to see what they end up looking like.

I love Kathrin's warps! I also have both of those and I ordered November's a couple of days ago. Did you hemstitch your shawl? I was wondering if you did that with th sticks in there?

I love Kathrin's warps! I have the same ones and I just ordered November. Susan, did you hemstitch your shawls? I wondered because of the sticks.

Debi,
Yes, I hemstitched. If you look closely at the picture where the shawl is on the styrofoam board you can just see the tightly snitched up bouts. I've never been a fan of the loose look when some just twisted fringes without hemstitching. It just seems incomplete to me. I want the textile to last a long time!

Kathrin's warps are beautiful aren't they? I was tempted by Novembers colours (greens and rust) but it will be a while before the ones I have will be woven up as it is. That doesn't mean I won't buy another if the colours are just right though...

Brenda:
Welcome to weaving! You have taken up an activity that will delight you and that you can grown in any direction you like.... and never be bored! Weavers and fibre nuts are also good people too and it seems we're the same the world over. :)

Dianne:
I agree with you... beads would not have added anything and in fact,detracted!
I just loaded a black warp and going blind trying to thread and sley.... so something like a white warp. I glance at the bright warps several times a day and I'm looking forward to playing with those.

Hi Susan.
I have told you before how much I admire these iridescence shawls. I am going to look for similar colours in silk tomorrow!
I understand very well why you love the two hand painted warps! You asked for other ideas for drafts to use, and it just occurred to me that maybe the one I used for my "braid-like scarf" might be a possibility?
Here is the link to the Ravelry page, but if it does not work, I am sure you could find it among my projects there. If you would like to follow up on this suggestion, i'll be happy to send you the draft by mail :)

Thank you very much for the suggestion Ellen... I'm going to head over to Ravelry next and check the project out.

When you look for your silks, either pre-dyed or perhaps dyed by you, be sure to get really rich *deep* shades. Its that combination that brings out the iridescence !
Susan