So it seems that I have my hanging basket back and just in the nick of time. Ice cubes squirrelled into the available pockets around the junco nest was just not enough water for the basket... and it really needed a good fertilizing too.  The babies literally stood on the edge and jumped, and they were last seen part hopping, part flying around the other flower beds with frantic parents trying to keep up.  Seems to me, that this scenario can often mirror our experiences with our own children!

While the flower basket enjoyed a good watering and feeding, Bruce announced that we can't park our car inside the carport as swallows have built a nest in there and they are pooping everywhere!  So now our 'new'  car is out in the driveway and the birds have full ownership of the carport. 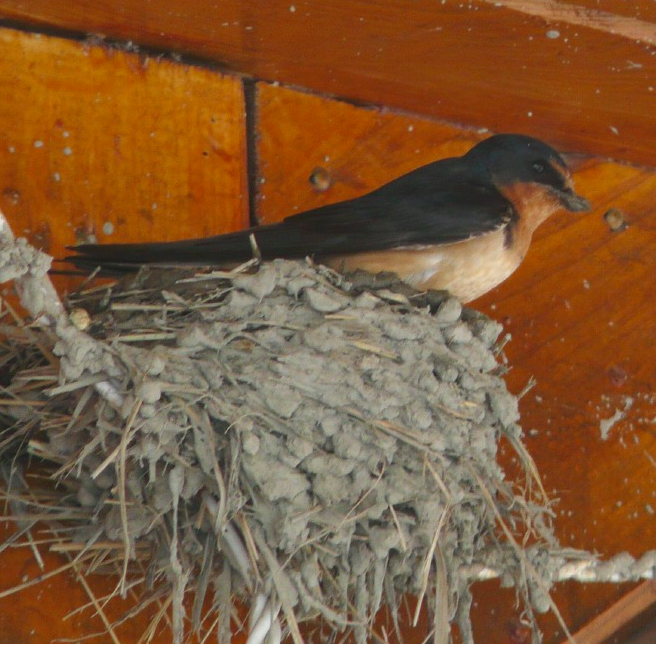 The compost cone has been emptied and dismantled and moved away. Seems it had become an all you can eat salad bar for rodents!  Not good.... so we have evicted them.  Being here in the trees, we can't feed the birds as it brings in bears and we can't put up humming bird feeders as it attracts ants.
Then  there are the little island deer (which look like baby deer but jump 5-6 feet with no problems) who eat annuals and hedges.  Having said all this, we do love being in a private setting with nature all around.... even if does push into our space from time to time! 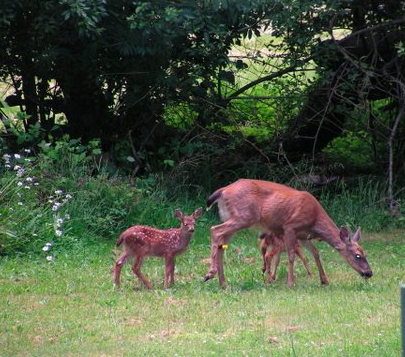 In my last post I had my latest warp off  the Louet Spring and stretched out as one long 'runner'.  I serged the raw edges of the scrap yarn filler and put it through the washing machine and dryer. Then I had a long session of hard pressing the yardage with a hot steam iron. (A steam press is on the wish list.... but they are so darn expensive!) 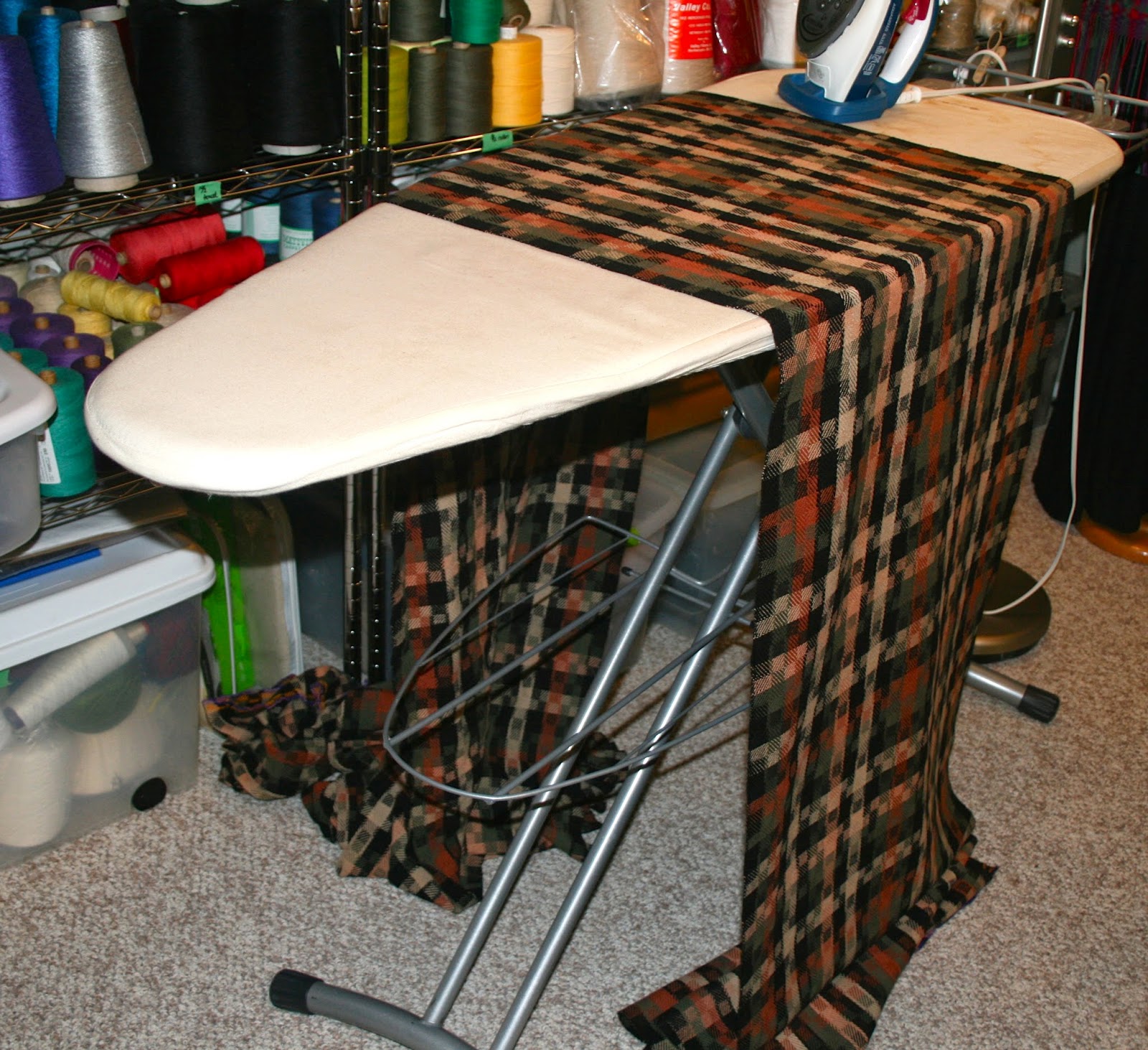 My towels on the loom measured twenty five inches in the reed, With draw in and then laundering that reduced to twenty two inches.  Twills will tighten up and draw in happens, and then there is the shrinkage factor too!   I know that I want large towels and will turn small hems but how long should they be in proportion to the width? What is a good length to allow for small hems on either end and a generous body of cloth?

Is there a formula for determining this?   Why, yes there is!  The Ancient Greeks called it "The Golden Mean"  They believed that this was a philosophy to live by:


The Greeks believed there to be three "ingredients" to beauty: symmetry, proportion, and harmony. This triad of principles infused their life. They were very much attuned to beauty as an object of love and as something that was to be imitated and reproduced in their lives, architecture, education (paideia), and politics. They judged life by this mentality.

Then there was the mathematics behind The Golden Mean:

Proportion is the relationship of the size of two things.
Arithmetic proportion exists when a quantity is changed by adding some amount.
Geometric proportion exists when a quantity is changed by multiplying by some amount.
Phi possesses both qualities.
If you study the Fibonacci series and the Golden Rectangle carefully, you will eventually realize that
phi + 1 = phi * phi.
Consider: suppose that you start with a Golden rectangle having a short side one unit long. Since the long side of a Golden rectangle equals the short side multiplied by phi, the long side of our rectangle is one times phi. or simply phi.
Now suppose that you swing the long side to make a new Golden rectangle. The short side of the new rectangle is, of course, phi units long, and the long side is that times phi, or phi * phi. This describes a Geometric proportion.
But we also know from simple geometry that the new long side equals the sum of the two sides of the original rectangle, or phi + 1. This describes an Arithmetic proportion.
Since these two expressions describe the same thing, they are equivalent, and so
phi + 1 = phi * phi.
(Now that we know this, we can discover the exact value of phi. )
The resulting proportion is both arithmetic and geometric. It is thus perfect proportion

Okay, for some folks this is super fascinating stuff... and for others, their eyes glaze over!   I  failed math in school and  the advent of calculators arrived too late to save my grades. Not that the teachers would have let me use it in class like they do now!  All you need to know is that there is a mathematical formula to achieving a pleasing balance between width and length.   You have to love the internet as now you can simply click on a link and plug in the known number or measurement and get the golden  ratio calculated quickly and painlessly for you!

Save and / or book mark this web site:   Math is Fun: Golden Mean Calculator Web Site

{ There are many web sites out there that explain the whole formula and philosophy if you want to learn more. There are some links embedded above for you to review.  You can use the formula to plan garden spaces,  reports and photo layouts, interior home design, homes, even cars.... and sizing textiles to perfect proportions. }

You enter in the known number at the web site by changing the orientation from portrait or landscape if necessary and the calculator will provide you with the correct number.  In my case I entered  twenty two inches and the calculator gave me thirty and a half inches for my finished length. Then I had to make a decision on what to allow for hems and cut each towel apart every thirty four inches. 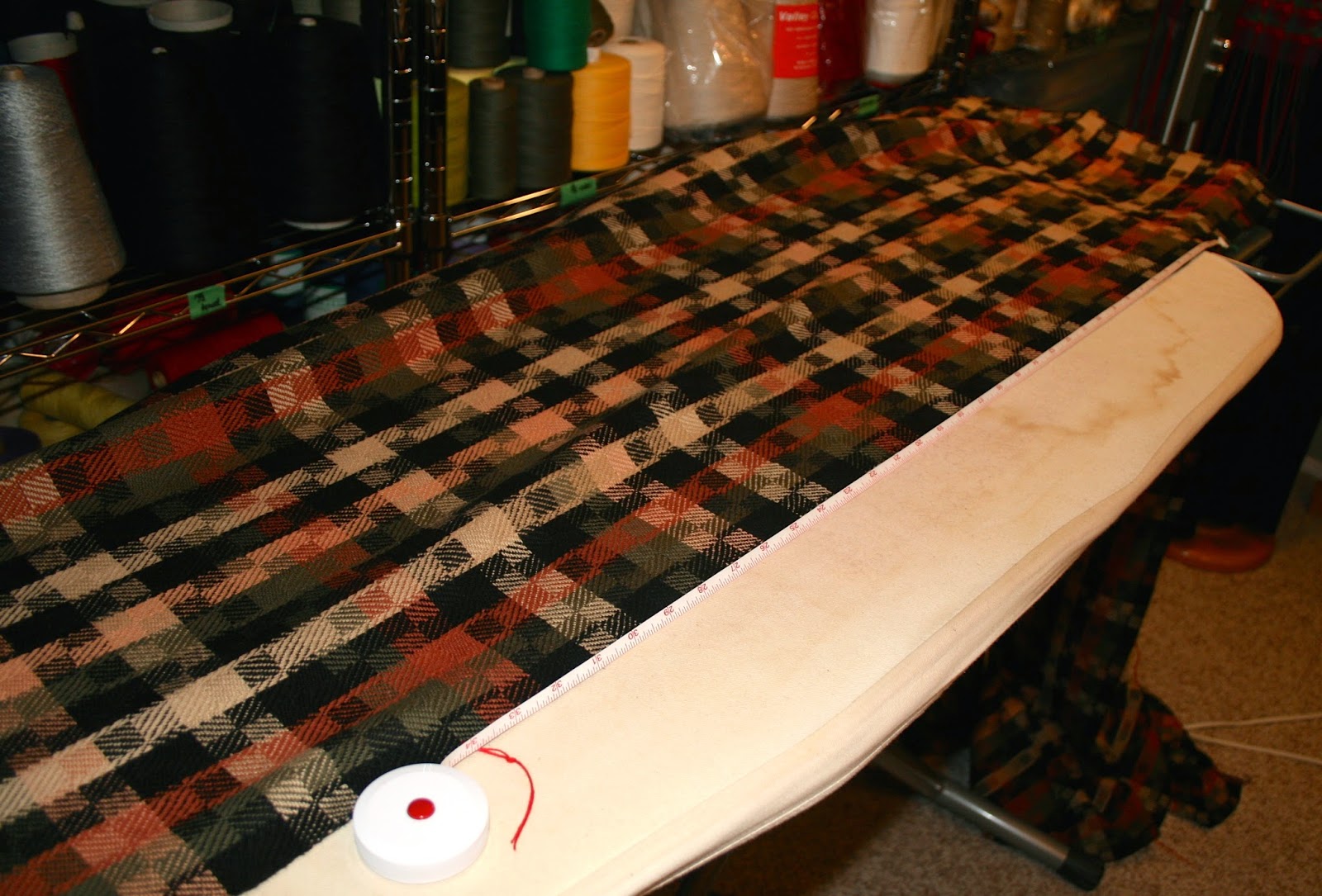 I measured every thirty four inches and placed a little red cotton loop to mark the cutting line. Fortunately the pattern has built in lines to follow!

I found only one treadling error in all of the 8.6 yards!  As you can see I marked it with a green loop and it coincided right next to a cutting line. It would be buried inside the hem allowance.  A great bit of luck! 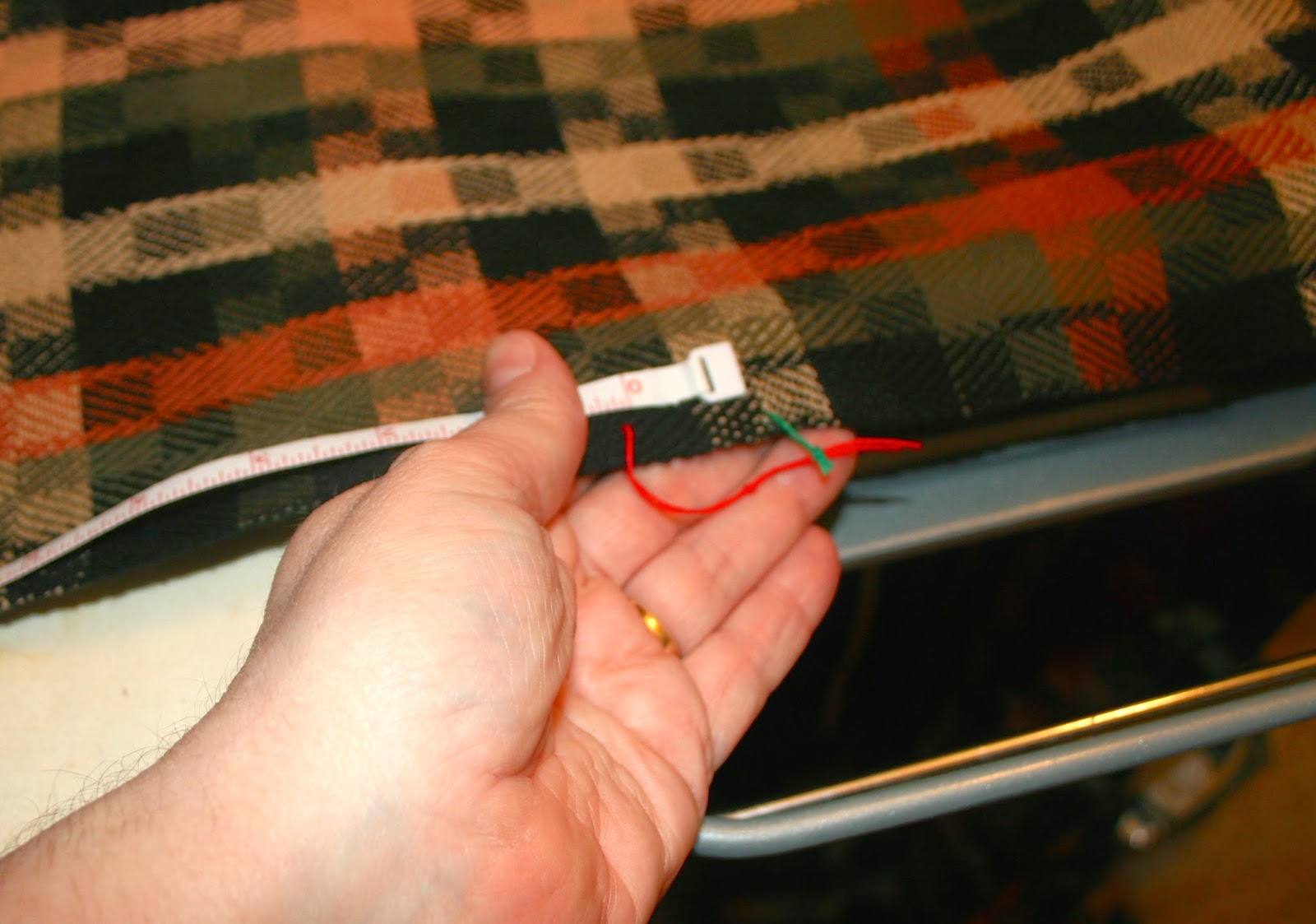 I had planned on seven towels, plus some samples and loom waste.  When the cutting was all done I had eight towels!  No samples and very little loom waste.   The warp had been laced on at the front and looped onto the apron rod at the back which as you saw in my last post was woven almost right to the back of the eighth shaft.   I had budgeted twenty inches for loom waste and the verdict is.... 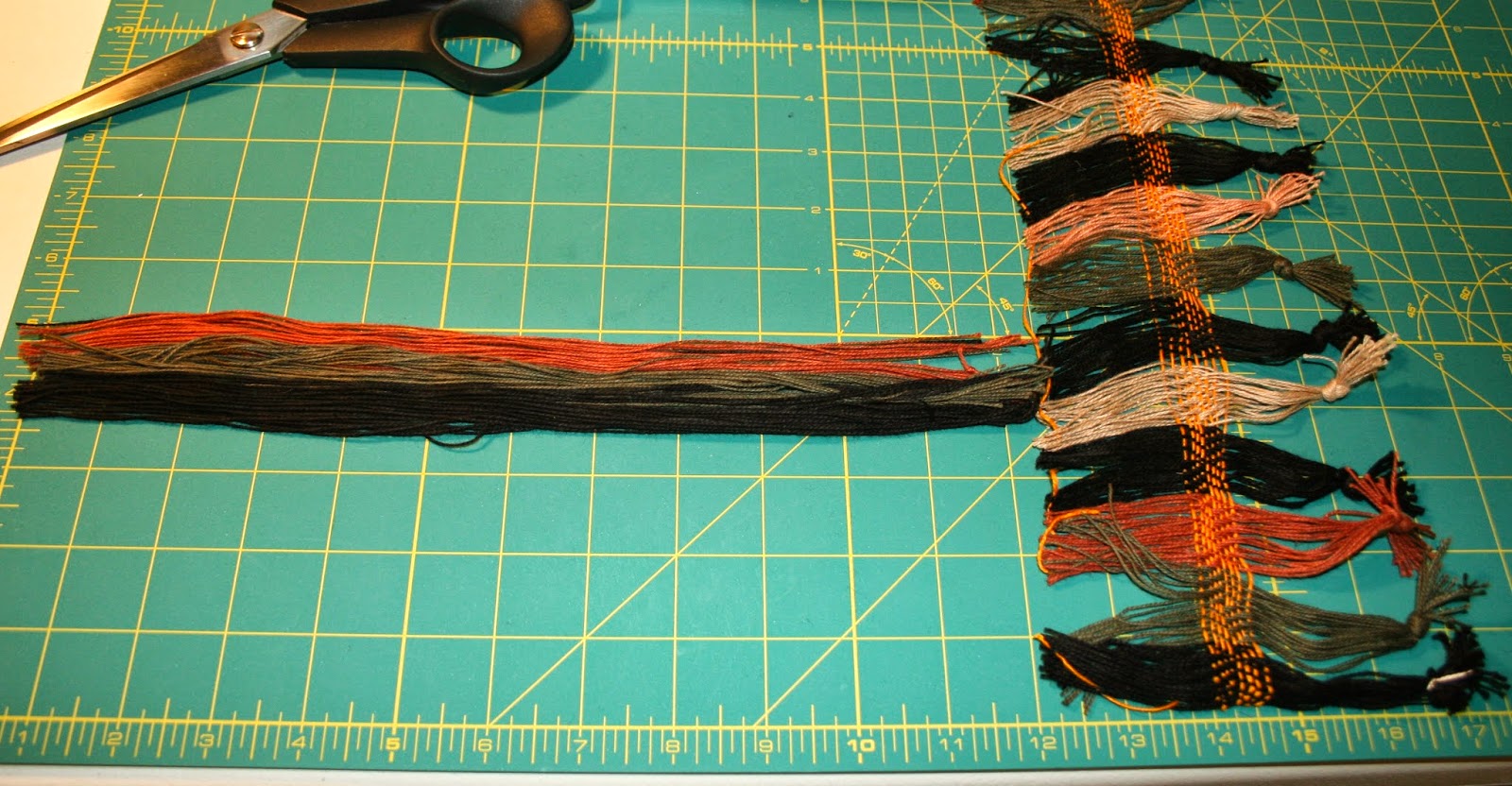 Seventeen inches!   I was darn close...

I folded the edges and pressed  and pinned them and they were to be a task to do at night while we watch the television.  Great in theory but with black thread, and all black sections in warp and weft it has become a day time job so I can see what I'm doing! 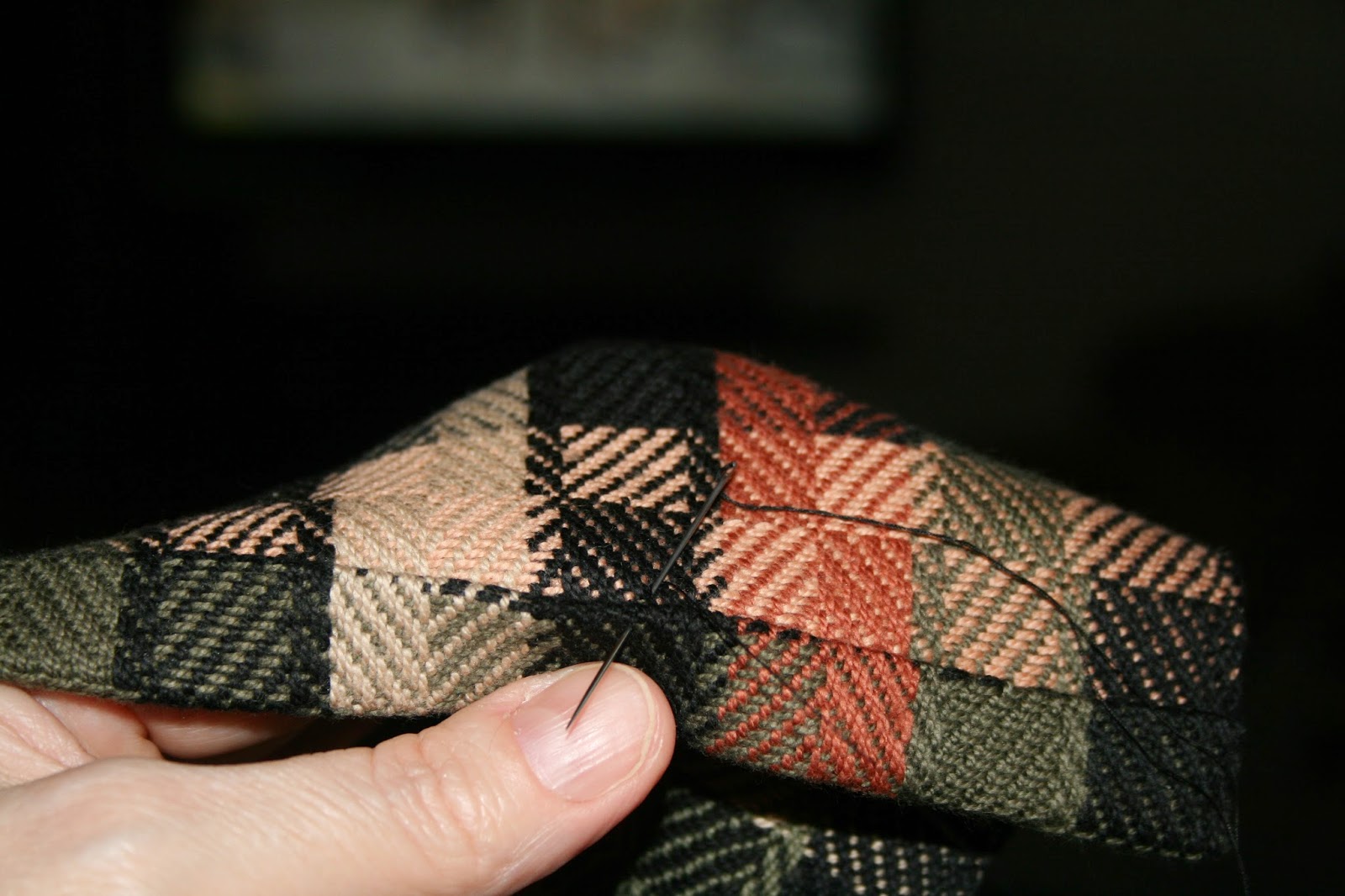 Eventually, I got a couple sewn and they measure up precisely thirty inches for length by twenty two inches for width!    I got them lightly pressed and ready for their close up's : 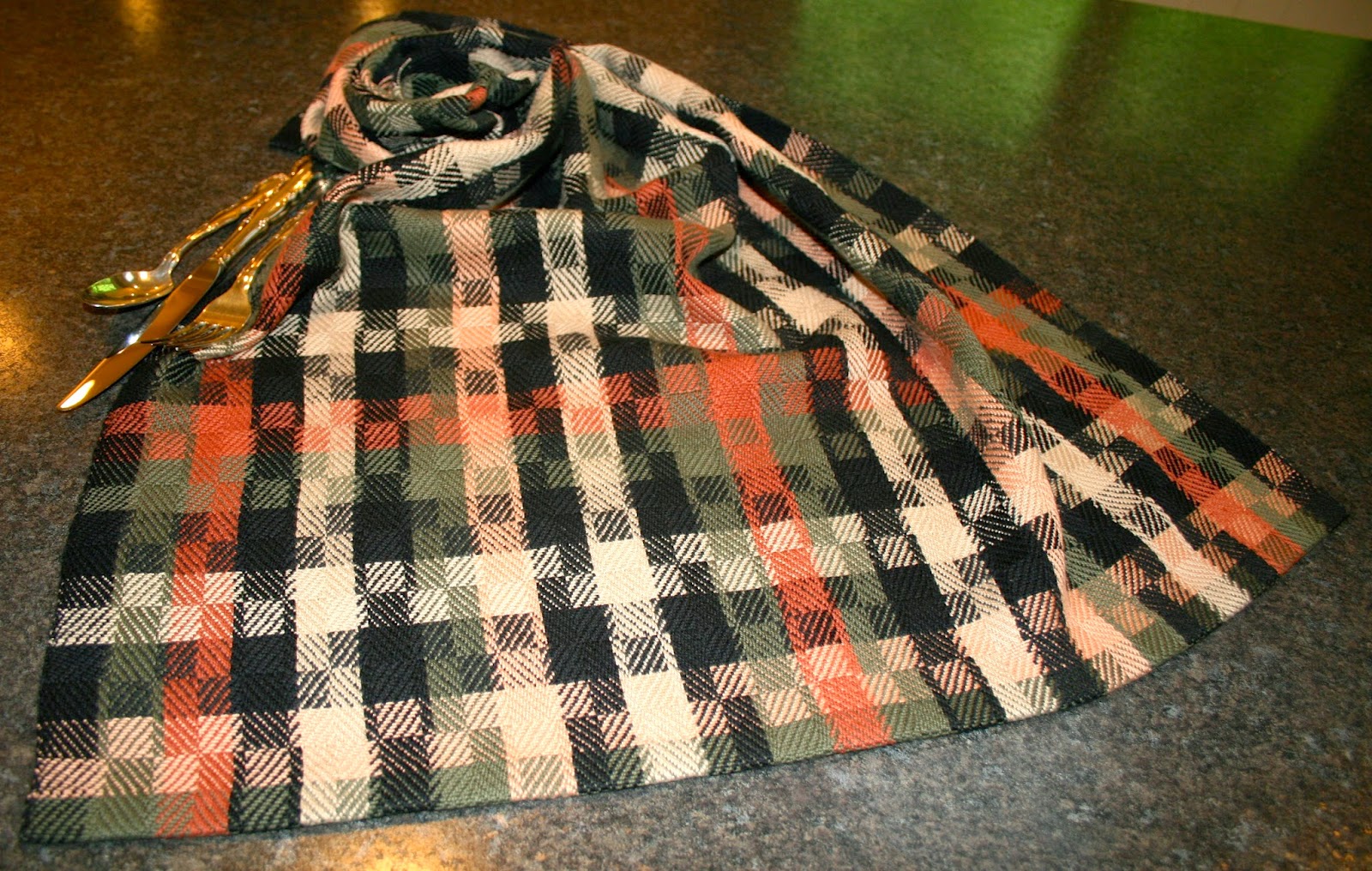 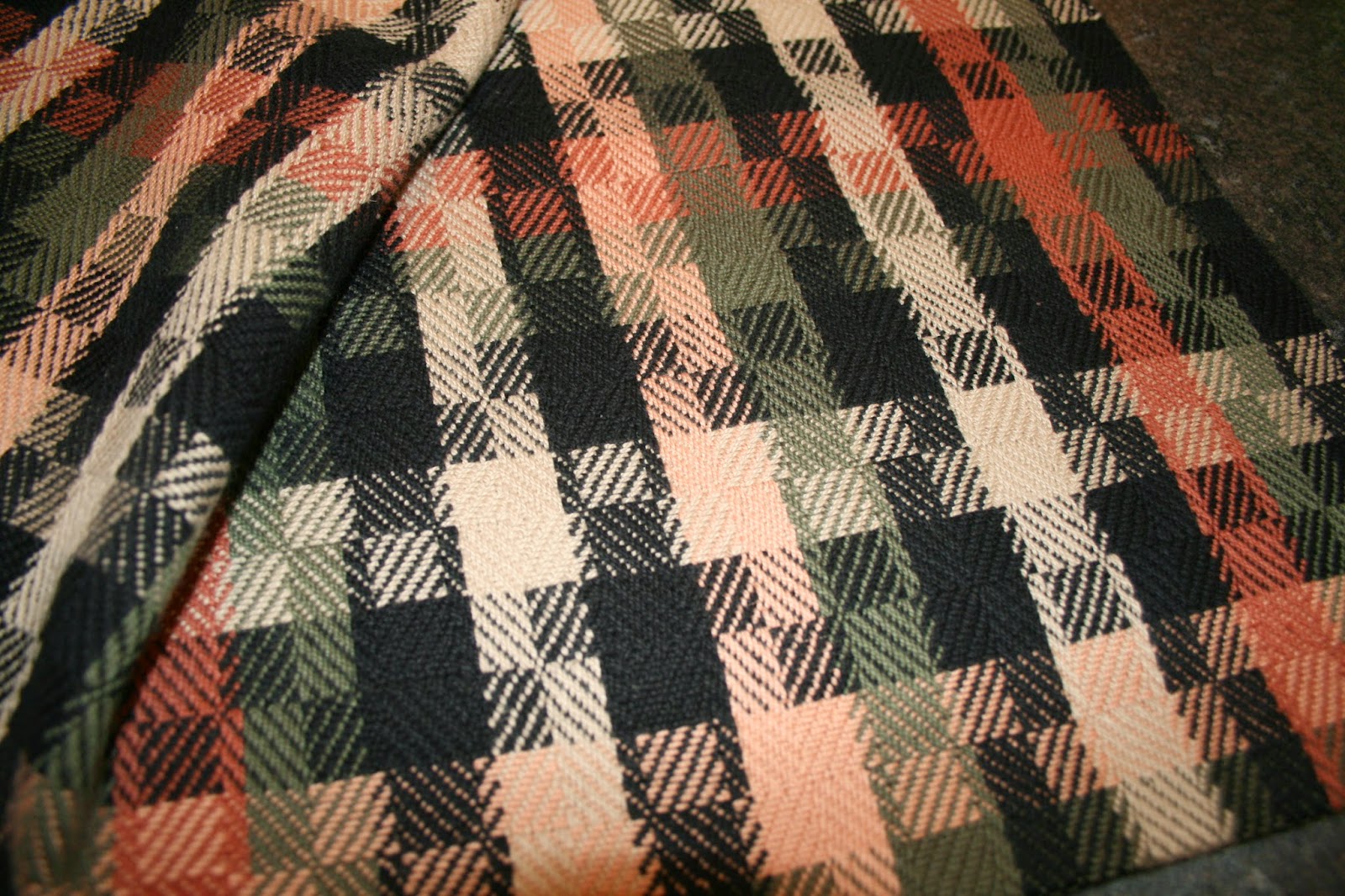 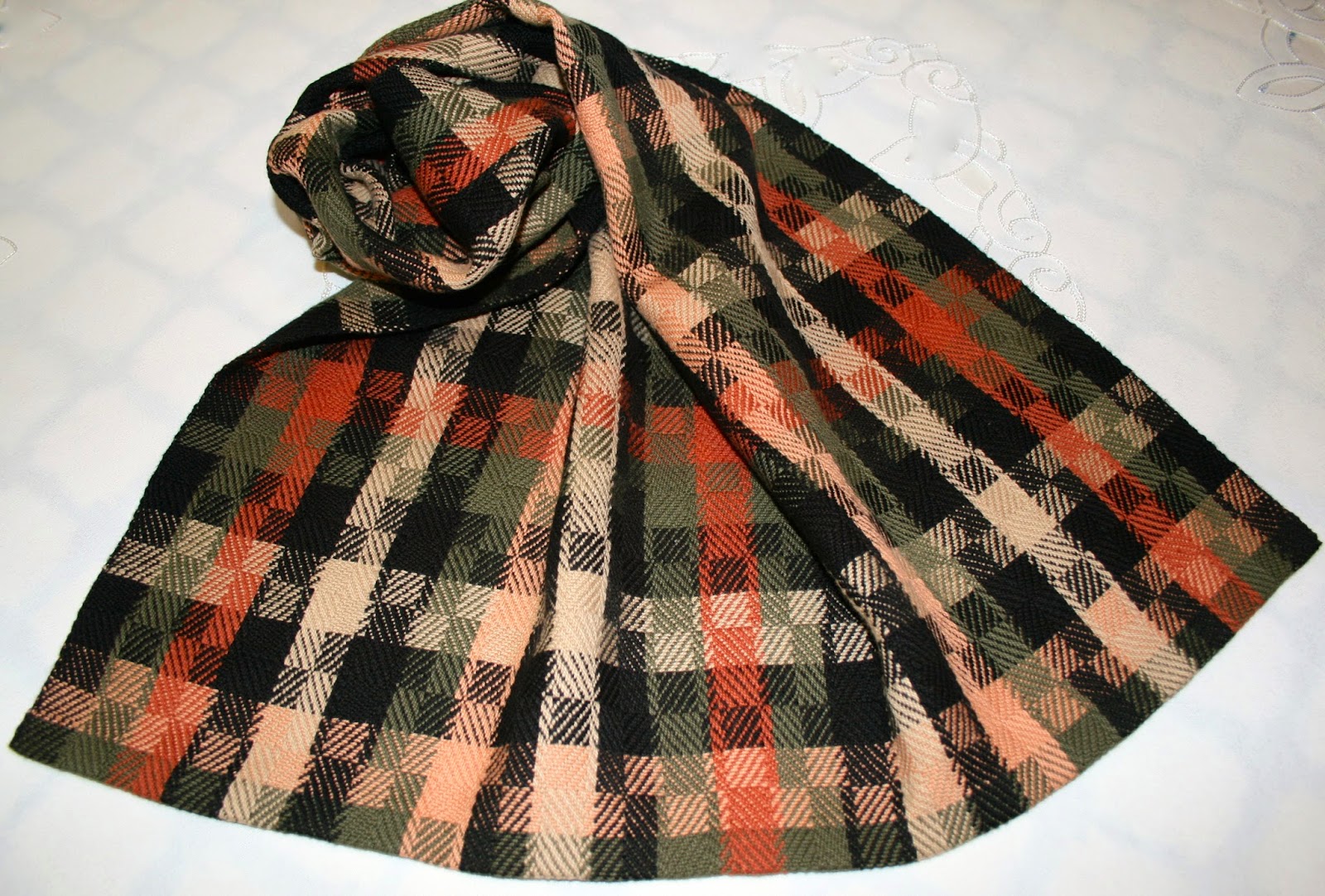 I have to make a comment about the colours. They are black, a sage green,  cream beige,  soft peach and something I like to call "burnt pumpkin"  Its not the orange I see on my computer  screen but something much softer and lighter.  Trust me, they all work together nicely. 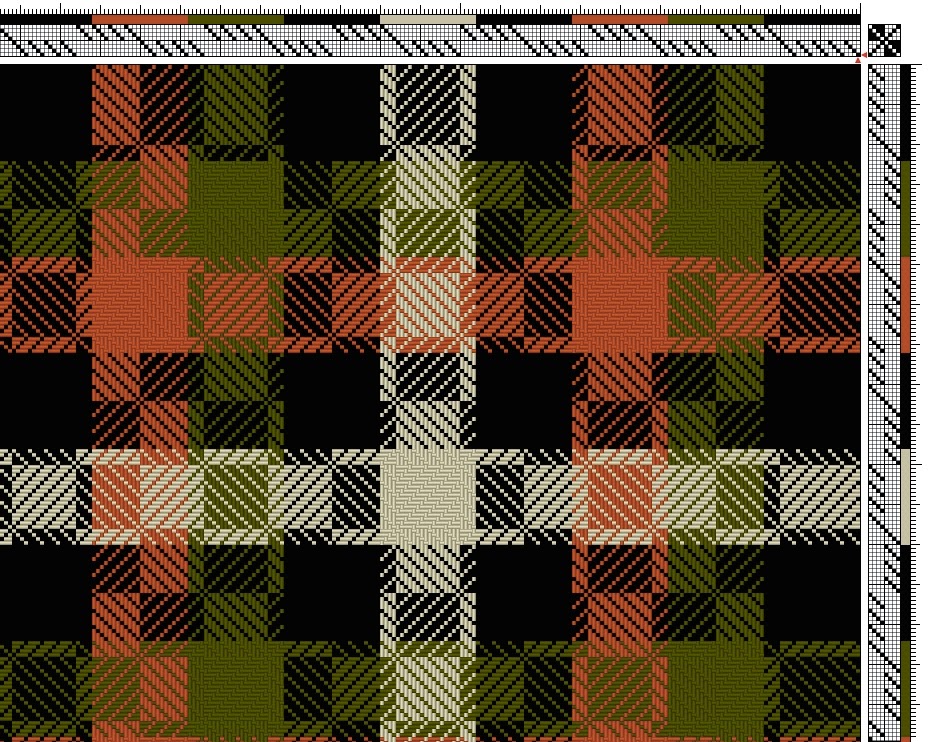 Meanwhile my next warp on the loom is a bit difficult to weave because I can't see what I'm doing! I'm having to treadle by my notes alone and be extra careful to call out the steps so I don't miss one. I can't see to correct a mistake.... and later after its off loom and washed won't be much help!

I love your towels - great color combination and weave structure.
I'm with you - I'd love a steam press.....some day......

From friend and weaver Barbara Henry:


Barbara Henry: What a wonderful post ......... I love the part on how the birds are building nests in unsuitable place, and the other wild life around you. Mother Nature at its best. I also read with interest the area on what the measurements should be for your tea towels ..... and yes, my eyes did glaze over - math is not my thing. I have to admit I did bookmark the site you provided for finding the formula for measurements ..... Thanks for sharing that, whether I will remember I have it, is another matter. Your tea towels are beautiful.

I too will take a pass on the math, but thanks for showing me what I have yet to learn. This towel project is really striking. I love the colours and the pattern and initially believed it to be a shawl, so impressed was I. I'm looking forward to seeing your next project come off the loom. It looks very intricate and the colours..., well I just can't say!

Mother Nature just takes over this time of year. Had to laugh about the birds and pooping - they build in our loafing shed making it impossible to keep our stored things free of bird poo! Love the pictures of the twin deer with their Mom. Your new towels are just super, love the math lesson (did I mention I am terrible at math). hugs

Nice towels! Love the colors. And wildlife is great as long as it stays on its side of the fence! We've got the same varieties as you do, but the bears are only a nuisance when they try to cross the freeway south of here. Several get killed each year; nobody explained "right of way" to them.

What an incredible difference from the original towels, just by adding stripes in both directions! My loom is currently tied up with this treadling - I may have to try this idea to use up some partial cones in shades of purple. Really stunning!