Weaving in the Dark 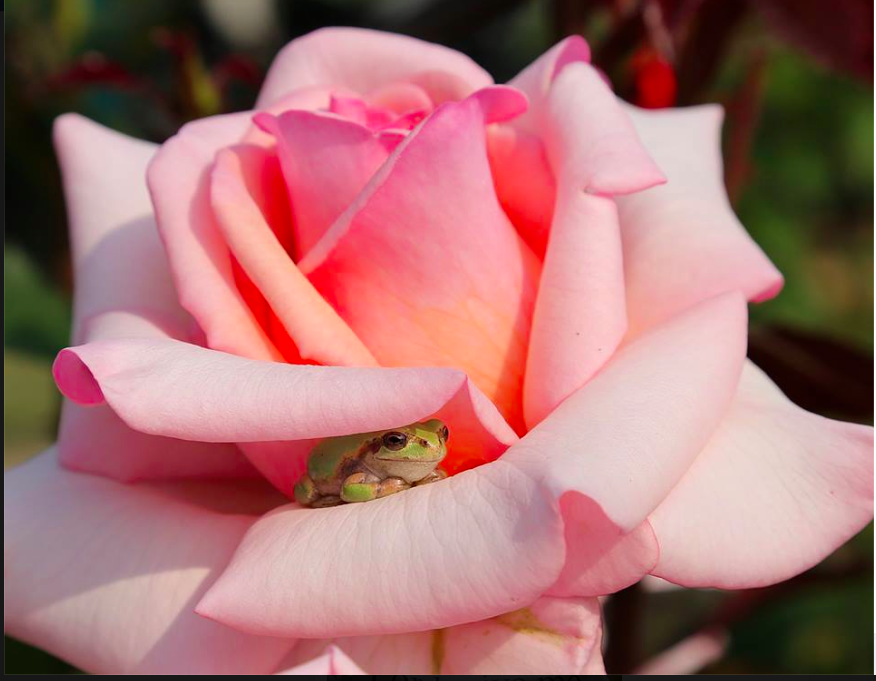 Isn't he or she cute? I wish I could give the photographer credit, but in the mean while I'll just say "who ever you are,  thanks for this great picture!" Edit: Ah, now I can!  Picture taken by: Photograph by Karen (jumbokedama on Flickr)  Many thanks to Susan Berger for sending me the info.

I'm not weaving heavy 12 shaft patterns right now and I am not really pursuing any real weave structure in depth. I'm just weaving what appeals to me.  For my next project I let what my Etsy store needs refilling be my guide and I am currently sold out of runners. So runners it is...

So I decided I would like to do the huck lace diamonds again as I found it to be a fun weave,  its also easy on the joints and the pattern is visually very satisfying to weave.

Bruce recently bought me some more of the French 9/2 linen for Mother's Day when we stopped into Knotty by Nature yarns store in Victoria. I had two cones of a lovely inky jet black with a beautiful sheen that only linen has.  So I got busy and wound the warp for three runners.... and then for good measure I have wound two other linen warps in other colours, so be prepared for two or three posts featuring yet more lace diamonds!  No doubt by the time I'm done all of them I will be taking a long break on huck lace  :)

Well,  yarns dyed black have had a harder time of it from all other colours. It takes a longer process with higher percentage dye and then there's the mordants and all the rinsing.  It didn't surprise me that this linen was a bit more 'linty' than the others and I even considered wearing a mask to weave.  I knew the vacuum would have to come out at the end of the project and maybe even mid way!

Bruce helped me beam the warp which did stick a few times but not bad all things considered.  Threading was fine, and then the sleying at 24 epi went okay.  Finally it was laced on and ready to go.  The "two stick start" is nice with linen as it gives a nice firm foundation to beat on at the start.  I got into a nice rhythm and the hem allowance wove up nice and quick and I did ladder hemstitching every four ends.  I use a slippery synthetic cord doubled as my spacer and wove a half inch of plain weave, then hemstitched the top row.   Now I'm ready to weave the lace!   So I wove a full repeat and this is what I saw: 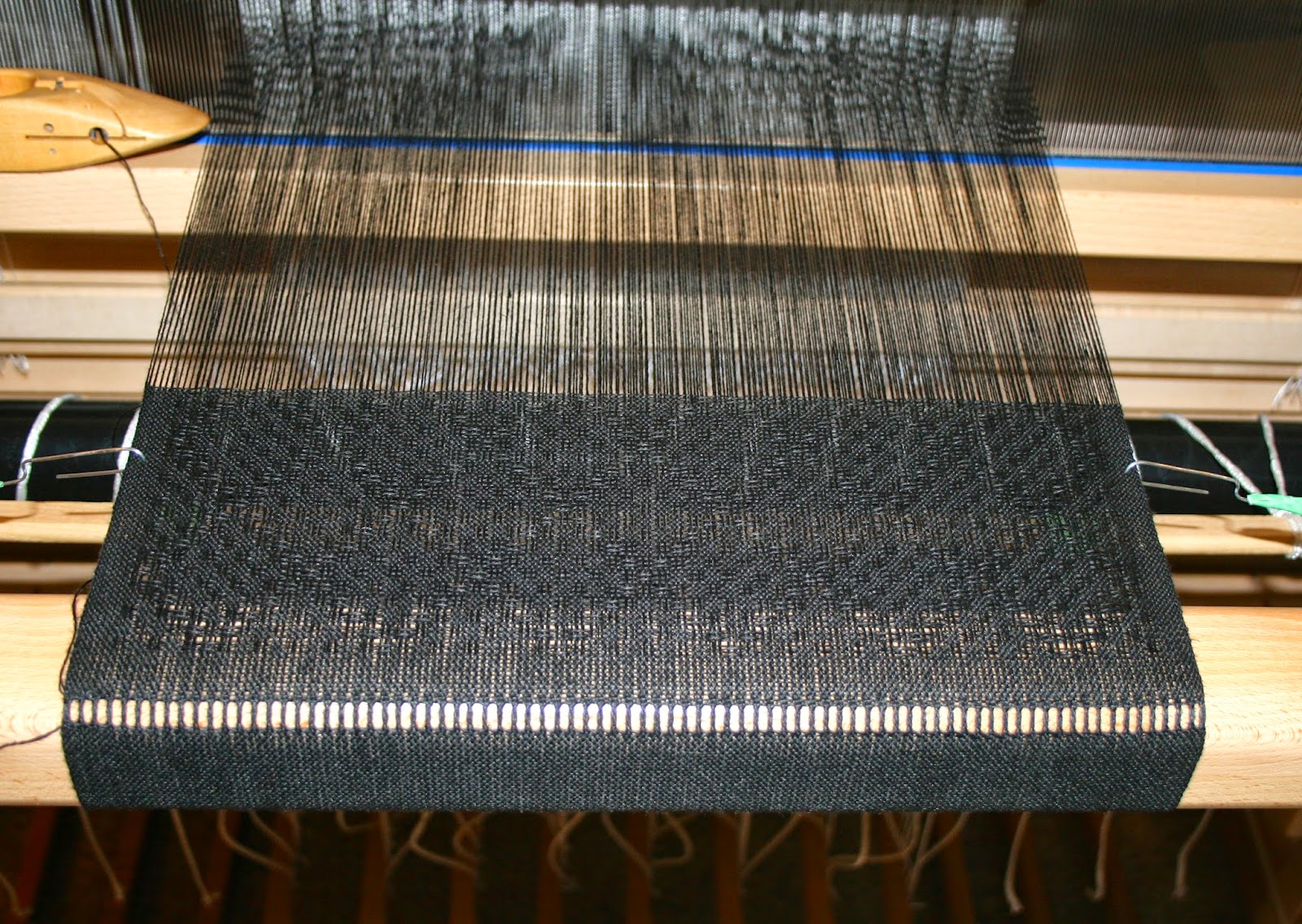 Can you make out the pattern? Nope, neither can I!   So I tried  slipping white paper in behind: 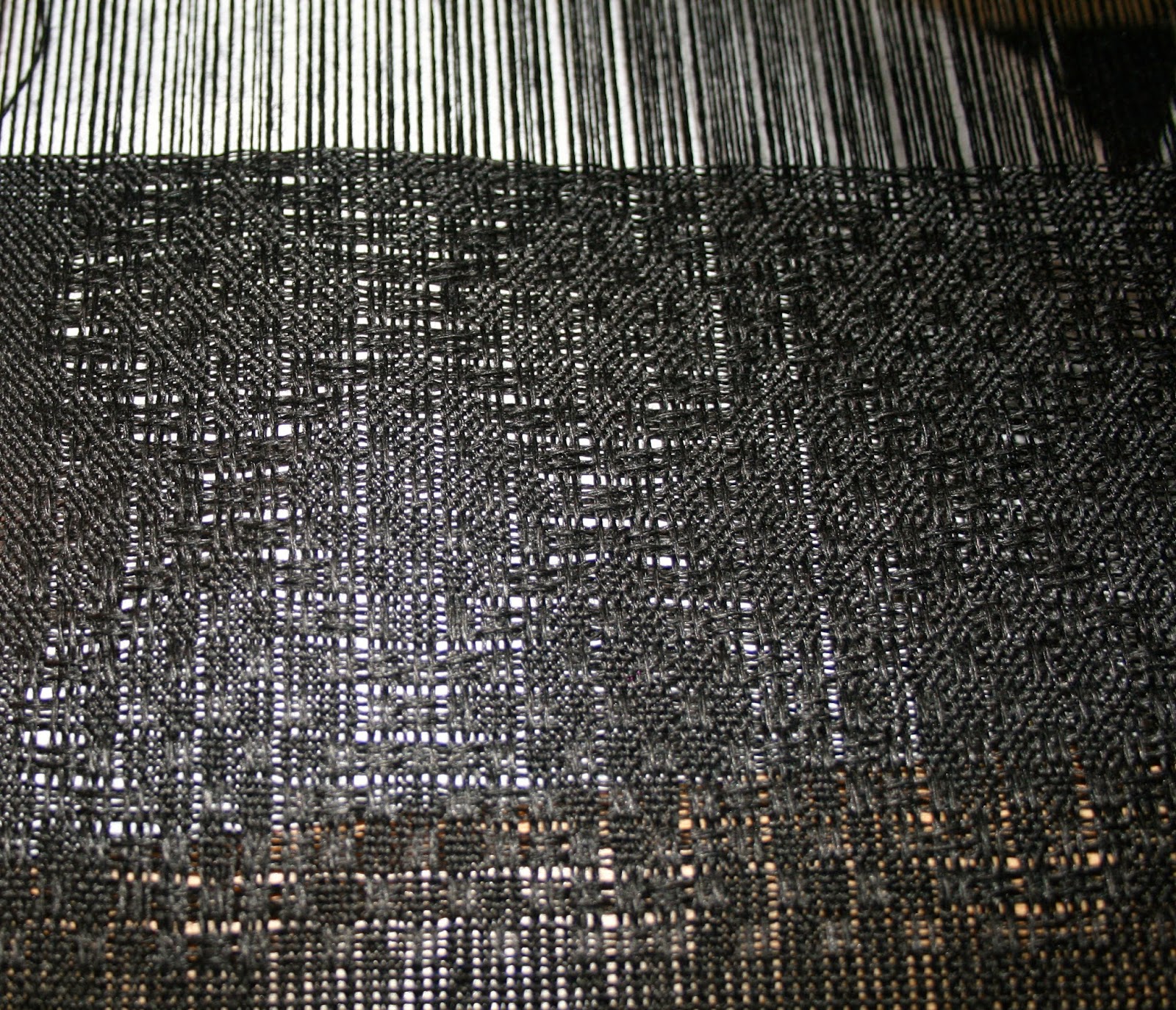 Not much better huh?  You can just make out the basic design shape but not much clarity, leastwise there could be two mistakes right there and you'd never see them!   Oh, crap!   Now what?

It occurred to me that I had my little treadling note stuck to the castle and I would just have to be really clear about my treadling order and literally call out my steps to myself.  The numbers represent the treadles, with number 1 and 8 being the tabby : " 1, 7, 1, 7, 1....8, 6, 8, 6, 8....." etc. The runs are all in logical groups of five ends. It seems if there is going to be an error, its usually where a tabby step gets missed and you must have the tabby change over to seal that group before moving onto the next group of  five ends
.
It was like flying at night and using only your instruments !    Or sailing in a fog bank using radar  (I used to live on a boat and can tell some interesting stories about boating in the fog)

So that's what I did for a whole runner, then a second in all black linen.  The third runner I ran into a completely different problem. I ran out of black weft!  I decided to stick with linen and used a natural beige 9/2 linen  and feature all black hems. An even beat is essential as variations will show as streaks. It was much easier as I could see the pattern build and grow and by now, a good steady rhythm was achievable.

Notes on linen in this project: 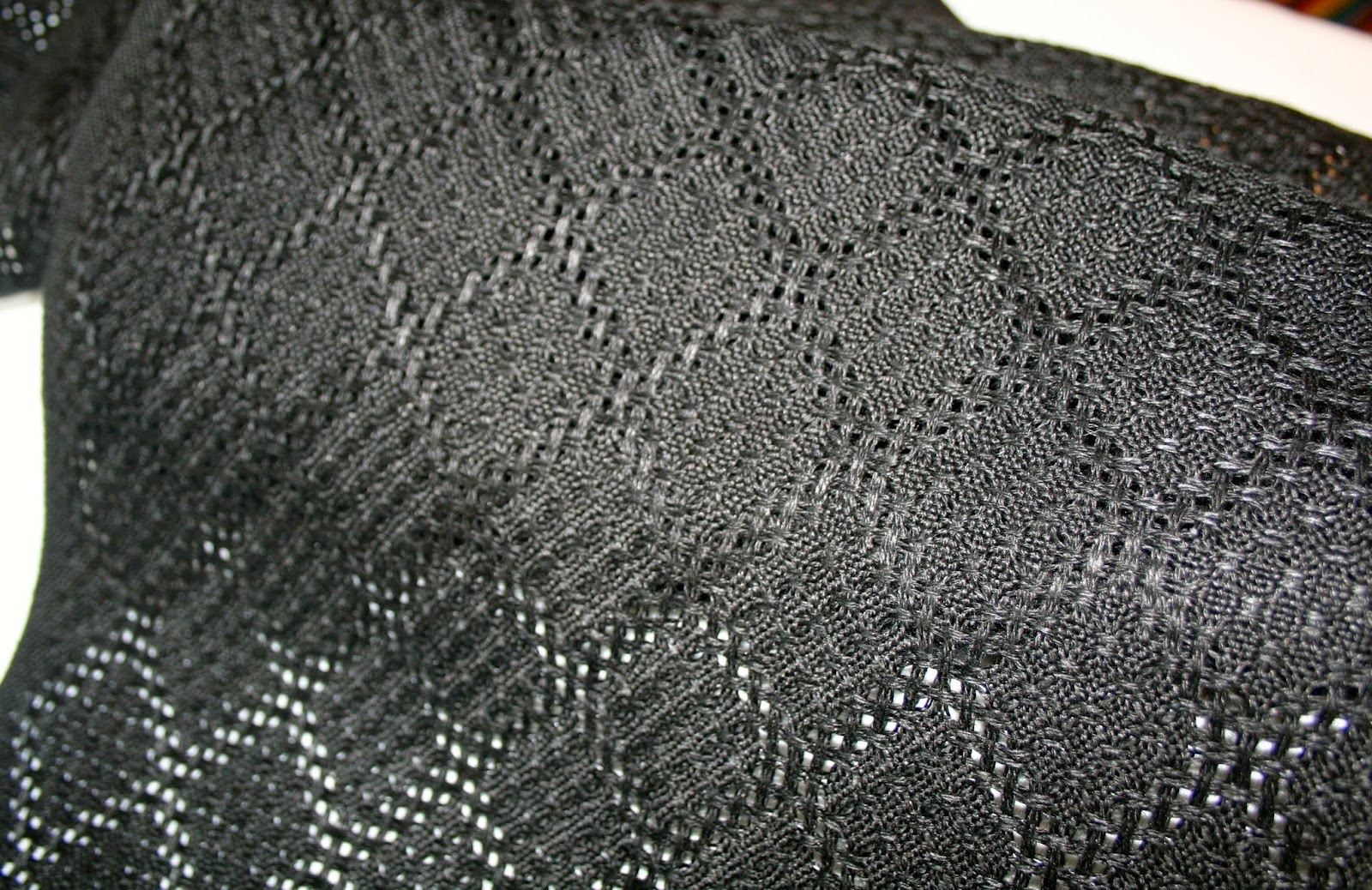 The lace areas all shifted to their final positions with the hand washing. 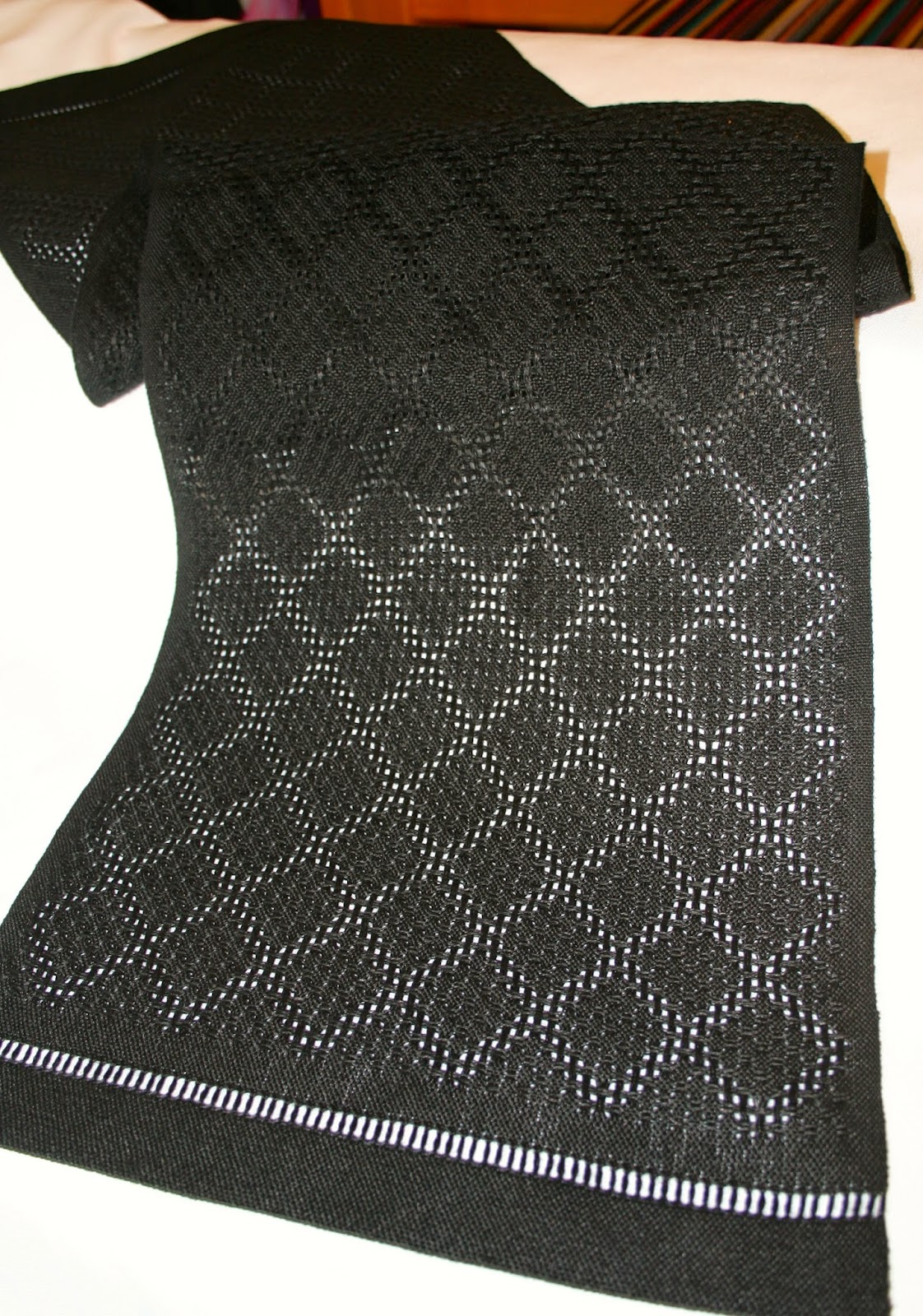 I got two all black runners 13 inches wide and one is 57 inches long and another is 61 inches. 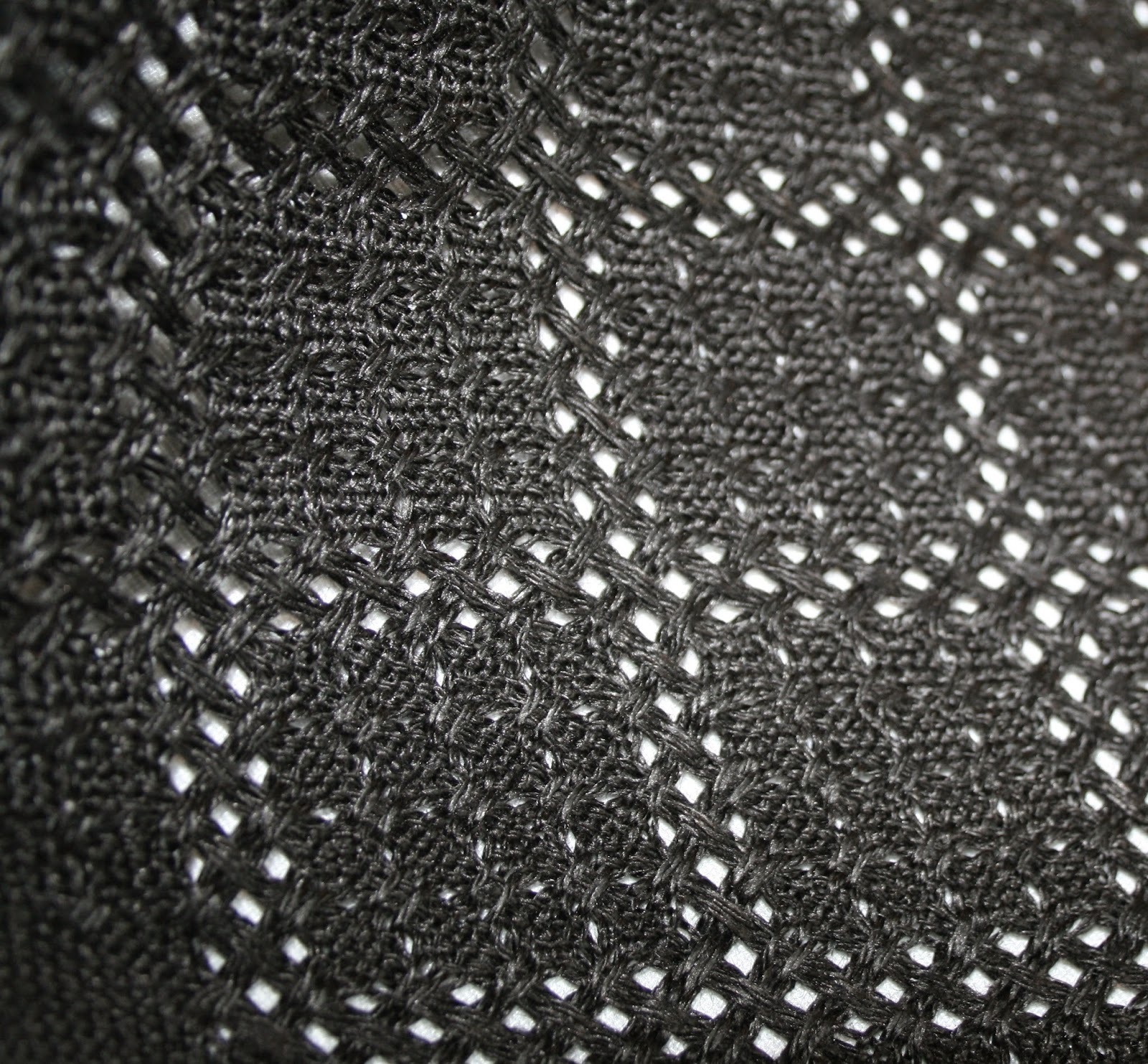 A neat feature of the solid colour lace is the effect of seeing Celtic knot work like curves when its turned to produce squares over the diamonds. It only works with solid colours though. 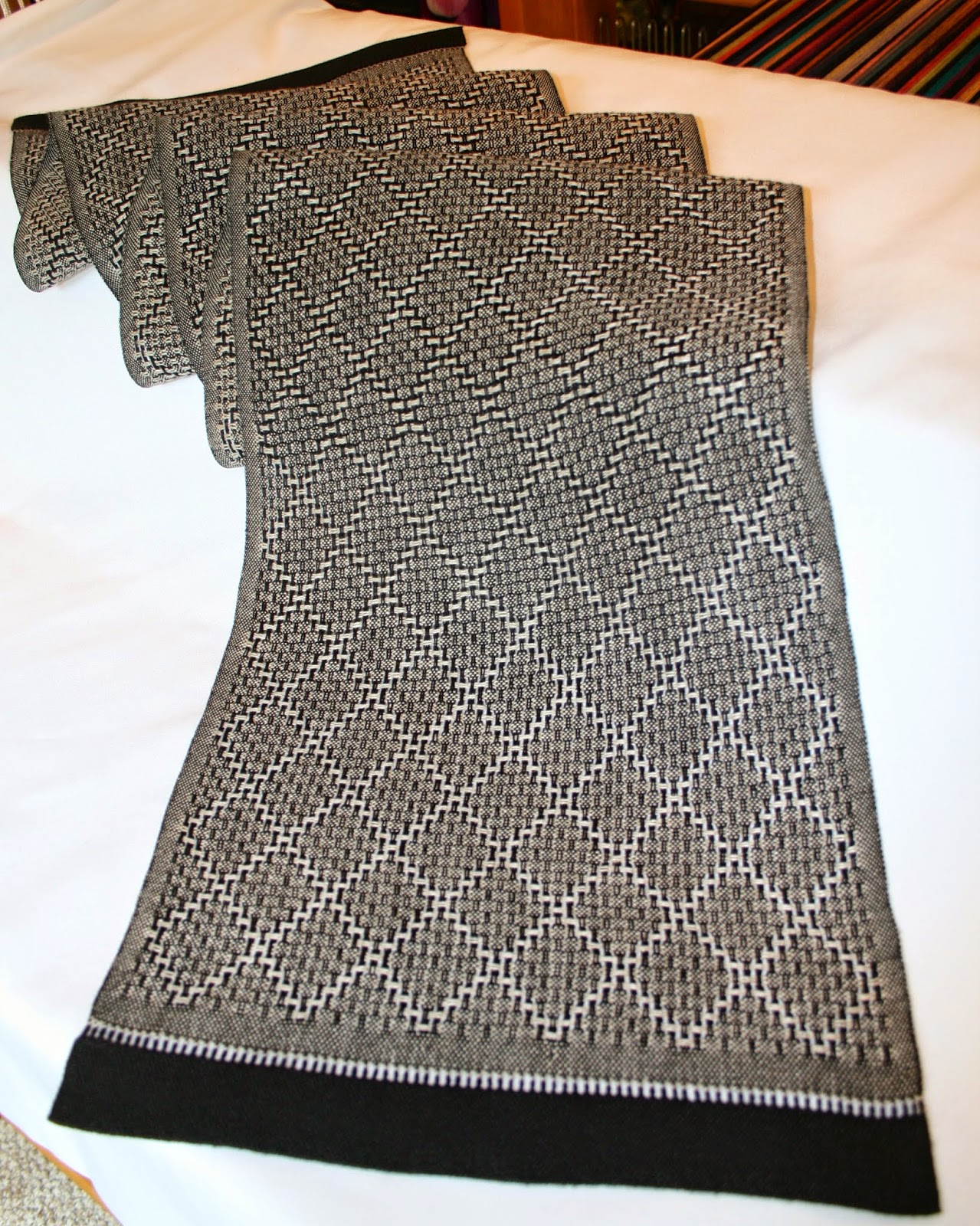 This runner comes in at 71 inches over all length, by 13 inches wide. 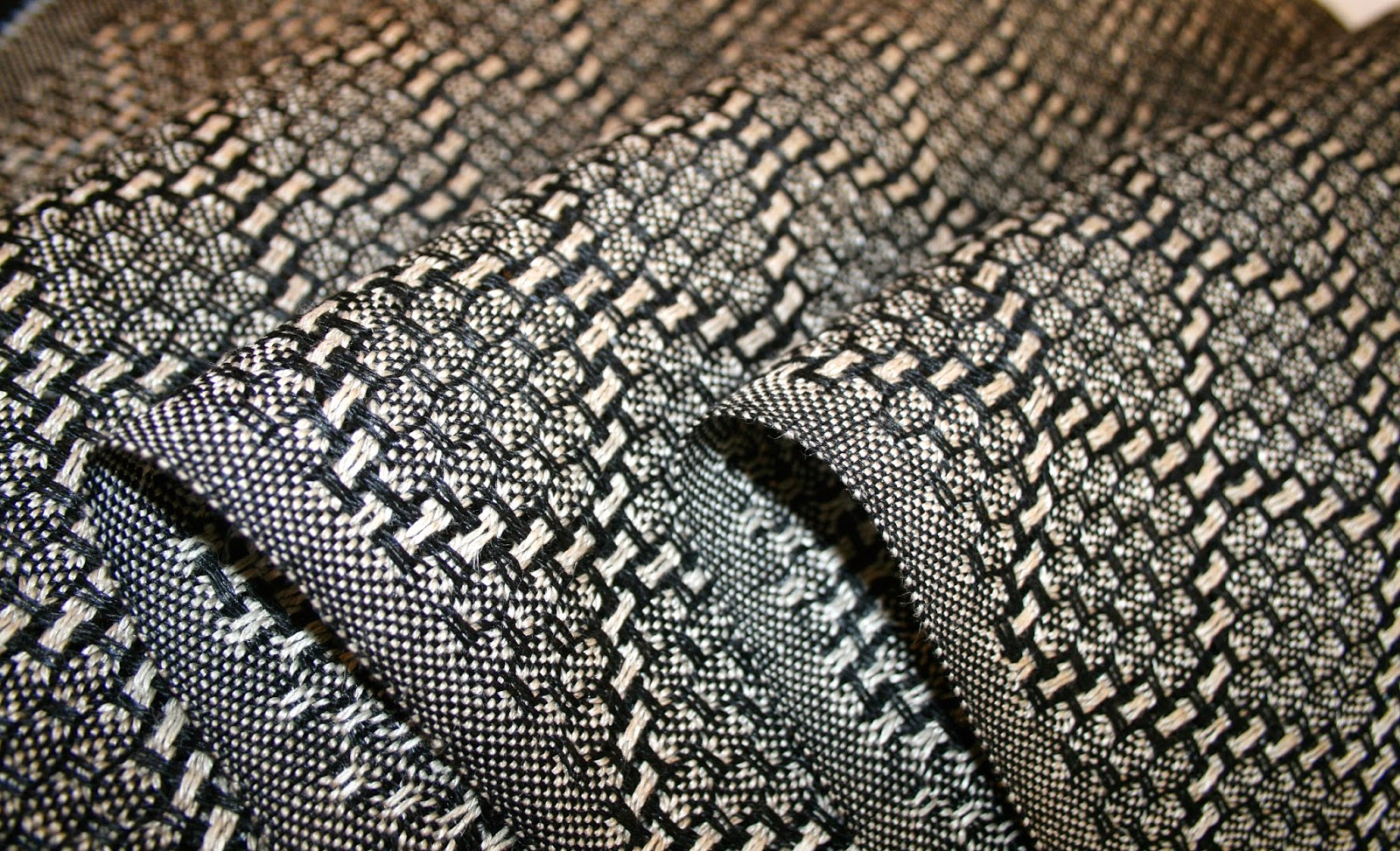 The beat appears to be even thankfully! 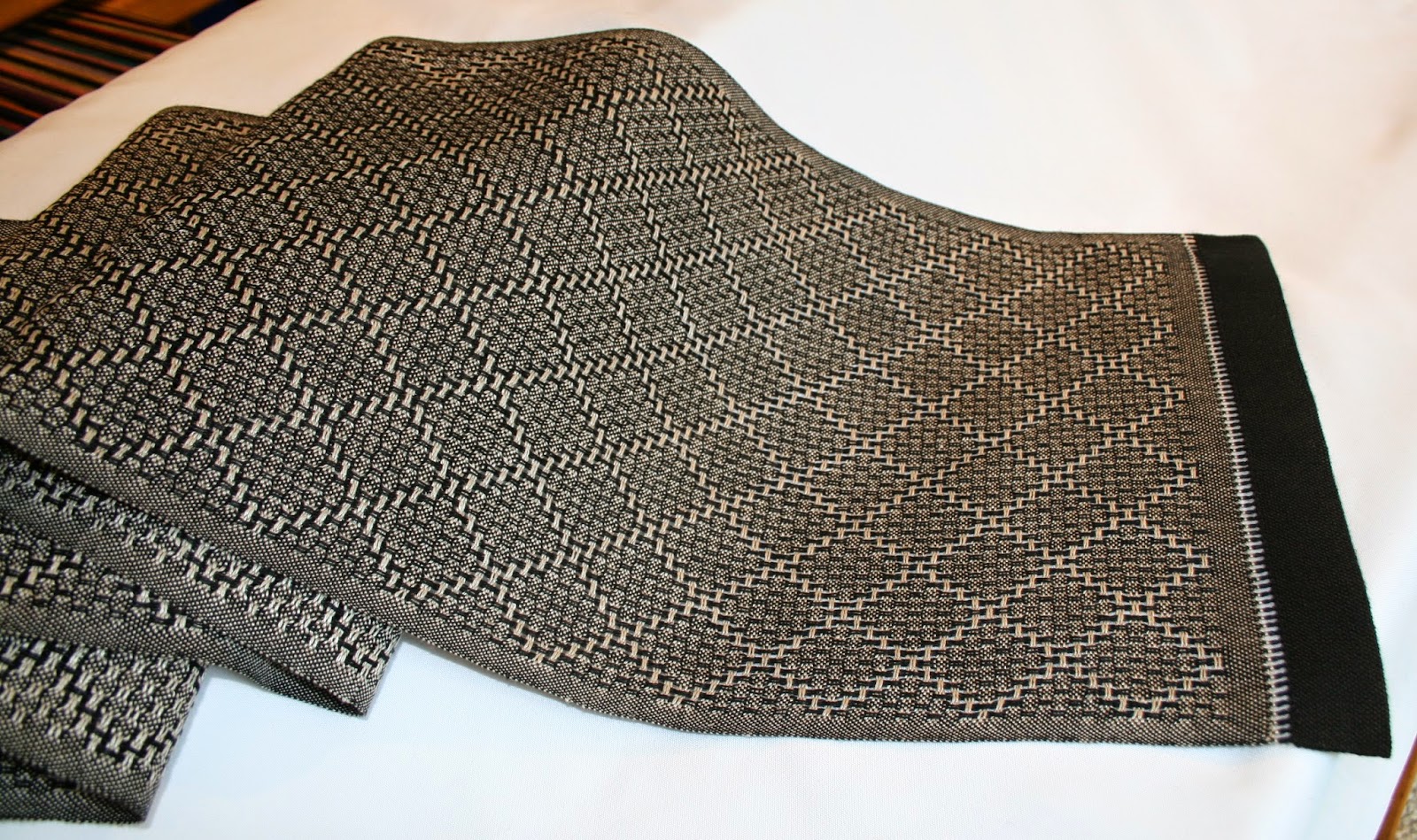 It has that look of quiet elegance I wanted to achieve.
Oh, by the way... there was not one treadling error in all three runners!

I also spent some of my Etsy earnings and bought myself a new shuttle! Bluster Bay has now moved to use Honex tensioners over the little cup hook system.  So I ordered a black walnut, open bottomed shuttle. It uses the cardboard pirns so you have to learn to build the shape on the winder in small increments.  There is an allen key to make adjustments much like AVL or Schacht shuttles.  I haven't used it yet but soon.... very soon! Isn't it pretty?   :) 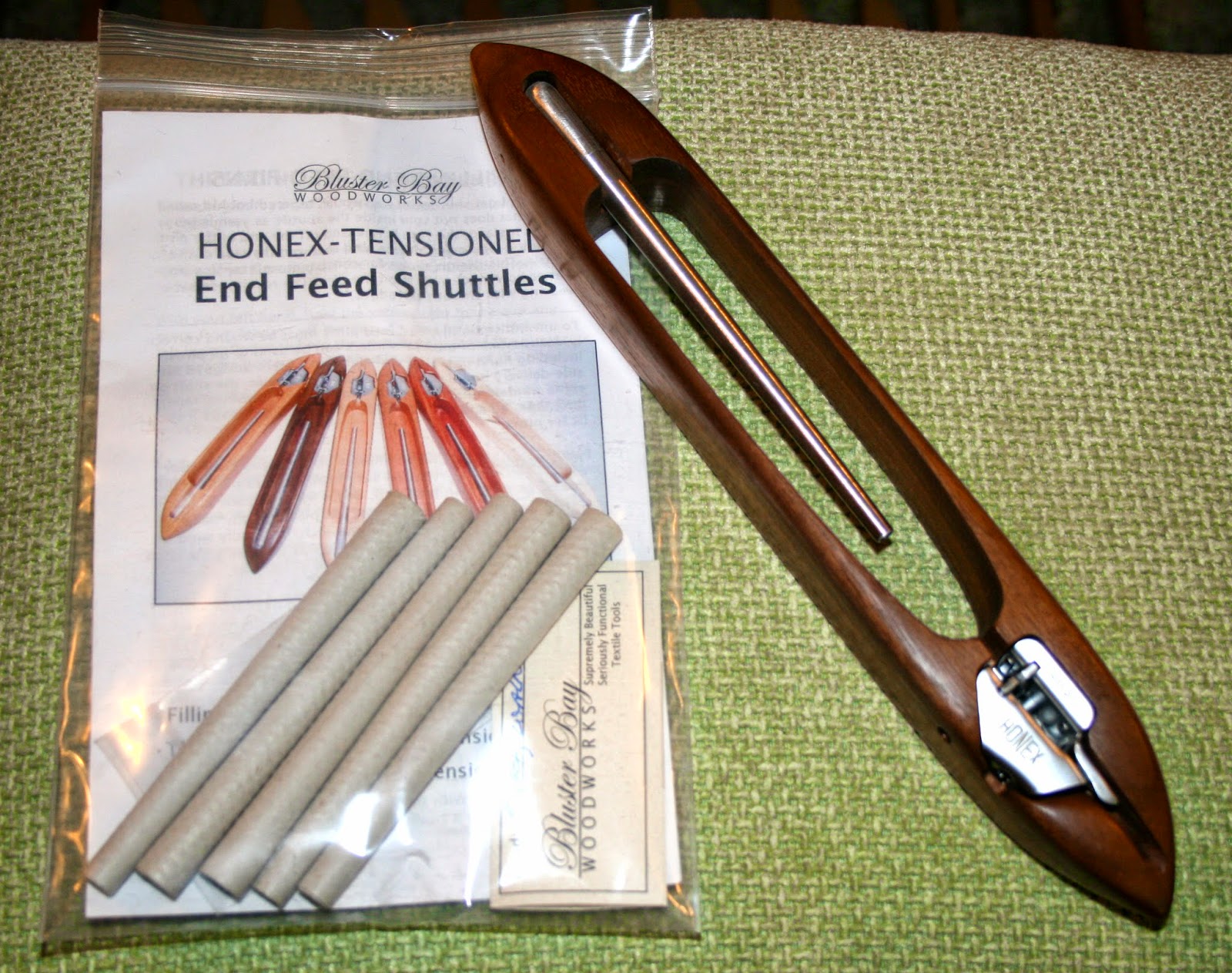 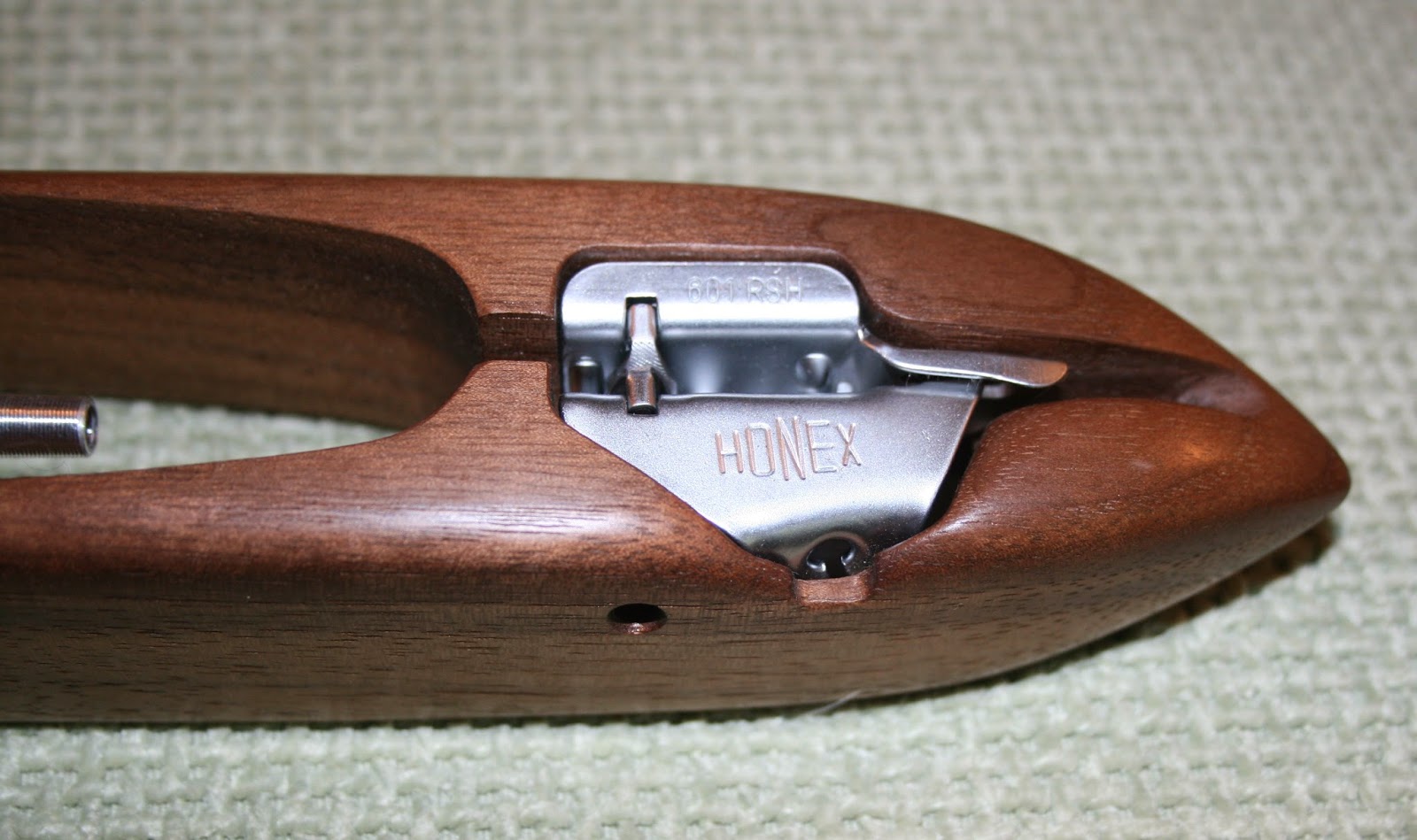 Susan, your weaving is beautiful, but your photography is also awesome as well. I tried to capture the patterns and the deep black colour, but wasn't able to. Once again, congratulations are in order. Hub

The black is stunning! I don't think these runners will last long in your etsy shop.

Beautiful weaving, as usual. You can see the photographer credits at http://twistedsifter.com/2014/06/tiny-frog-sitting-between-rose-petals/

The weaving is lovely ,as always. I have embroidered on 32 ct. black linen fabric, so I understand exactly what you mean by how difficult seeing the structure of it can be. I had to do it the same way you did, entirely by touch.
The bluster bay honex shuttles are wonderful. I had held them at a show in February , and knew I had to own 2 of them. When I finally tracked my train of thought back to the start..... I think that I may have bought an 8 shaft loom so that I could buy those two shuttles. After using the shuttles.... i think I should have bought a 12 shaft :)

Susan, these runners are stunning! Black may be difficult to see while you are weaving, but oh, are they ever worth it!
I really enjoyed reading your process part of the blog too.. thanks for that.

I especially love that Bruce offers comments (well-deserved, glowing ones!) and signs off as 'Hub' :). I love these runners……and just when I thought the gorgeous red could not be topped. To have done these in black is a testament to your discipline and exquisite skill. Gorgeous, gorgeous runners, Susan!