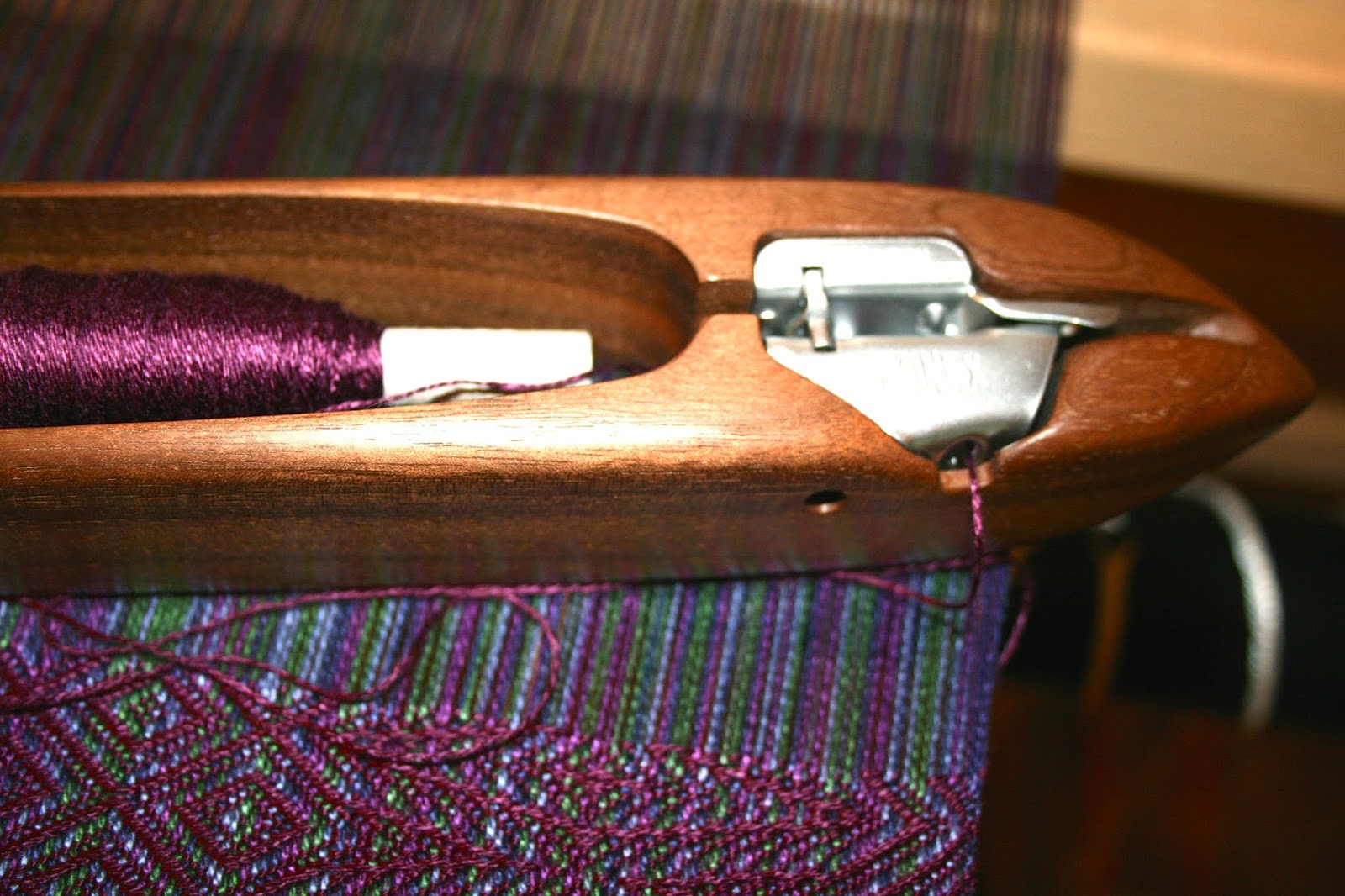 That's a Bluster Bay send delivery shuttle with a honex tensioner.   Curly black walnut wood.  I decided recently that I did not like the Bluster Bay shuttles with the cup hooks. Simply too much fiddle faddle for me. Drop the yarn through the slot and adjust the tension once and get going!  Much more my style.    So I sold off two of the 'cup hook' models and bought this one.  I used it for the entire new project and so have a good feel for the shuttle now. Its lighter than the twelve inch Schacht EDS and so was fine for a narrow warp.  It uses tapered cardboard pirns (which I think come from Louet) and you have to learn to build the end up, not have it collapse and then do the inch worm winding across. Takes a bit of getting used to but my weft was tencel and so slippery. (That's where the tensioning device on my AVL winder really came in handy!)

The shuttle worked nicely but my one pet peeve was how the shuttle felt to my hands when catching and throwing. I  throw and catch palm up and so the thumbs use the bottom end of the rounded area where the pirn sits to throw and catch. That edge is smooth but still what I would call a 'sharp' edge or angle.  The Schacht has a softly rounded depression that the thumb slips into.   Its a small detail like that that makes all the difference in the world to the operator, especially when you consider the thousands of throws you make in a project. So the honex tensioner is a big improvement.... shuttle design needs a tweak.    The exotic woods are beautiful and its well made otherwise. 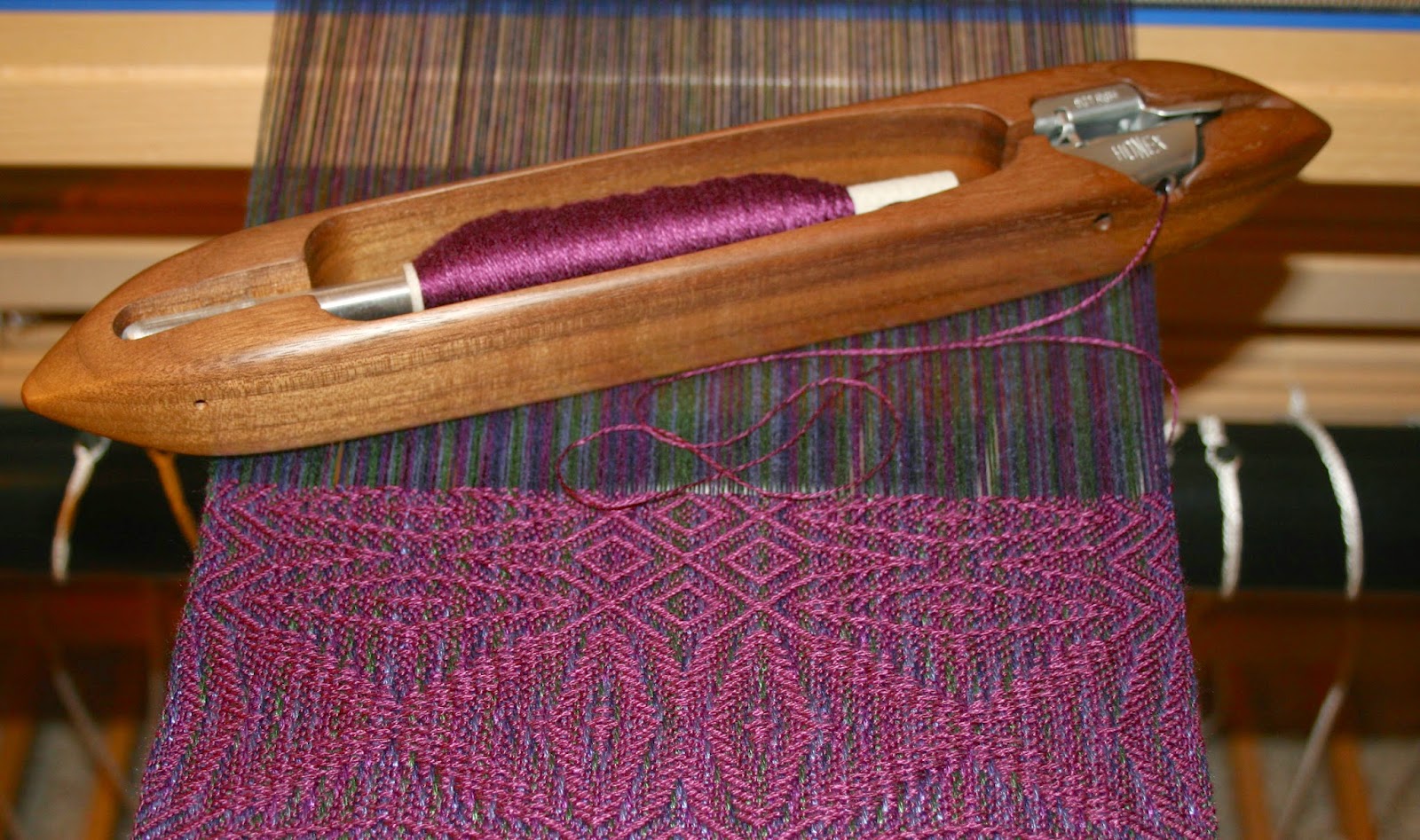 So what's that on the loom I can hear you ask ?     Well, I had a cone of 8/2 variegated tencel called "Sapphire Blue Combo" from Webs and I decided to give it a try.  Very pretty colour way and any thoughts I had of trying to get colours to pool disappeared when I saw the short increments of the repeat. To work it out would take more patience than I possess right now and so I decided to embrace the 'heather' look of  flecked colours.  (what the heck eh? :)    I decided to use a bolder weft colour of eggplant  after seeing how navy blue simply disappeared and I wasn't happy with other colour choices pulled from the warp.    I used a sett of 24 epi with my snowflake twill.   The 'X's" would not be so squat if I had resleyed to 28 epi, but it was okay and I went ahead with my sample.    {Resleying to 28 epi would have increased the angle of the edge threads and breakage.... the tencel was softer spun than the normal tencel and it was not something I wanted to deal with.  Choose your battles!  :)  }

After my sample was all woven up,  I looked to my notes to see how much length I allocated for fringe ..... and there was none!   I had calculated for two scarves seventy four inches  each, twelve inches samples, then my take up allowance for the woven areas......then I had added in my loom waste of twenty inches  and then  forgot to add in the fringes!   My sample was only six inches and then I reduced the over all woven length of the scarves and I hoped the rest would come out of the loom waste!

Phew!    I had to laugh at myself as I had never in 20 years of weaving ever left the fringes  out before so it seems you are never too old to learn new tricks.  I had to play "mental gymnastics" with the warp length and fudged myself up an answer!

Here are the beauty shots: 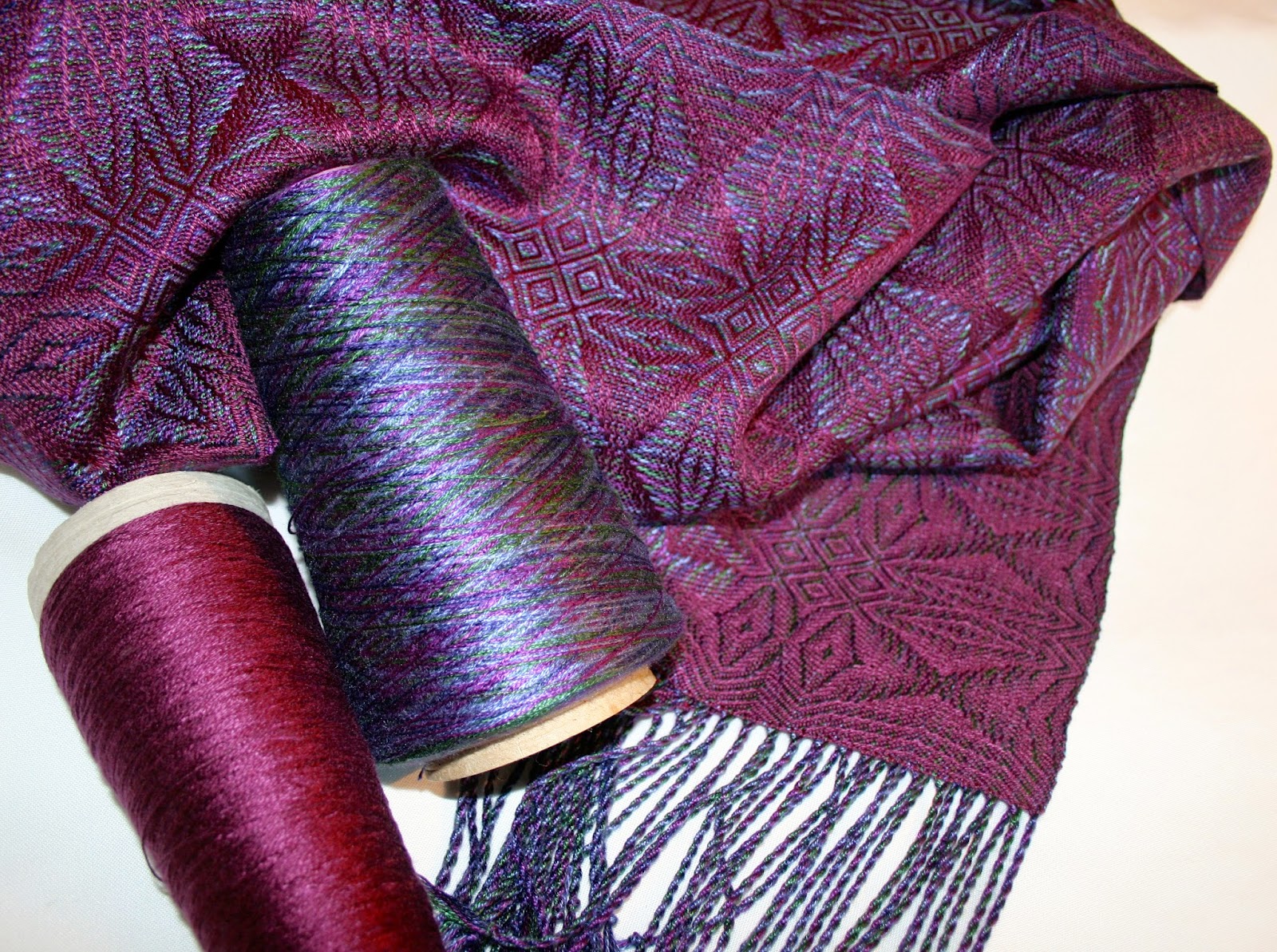 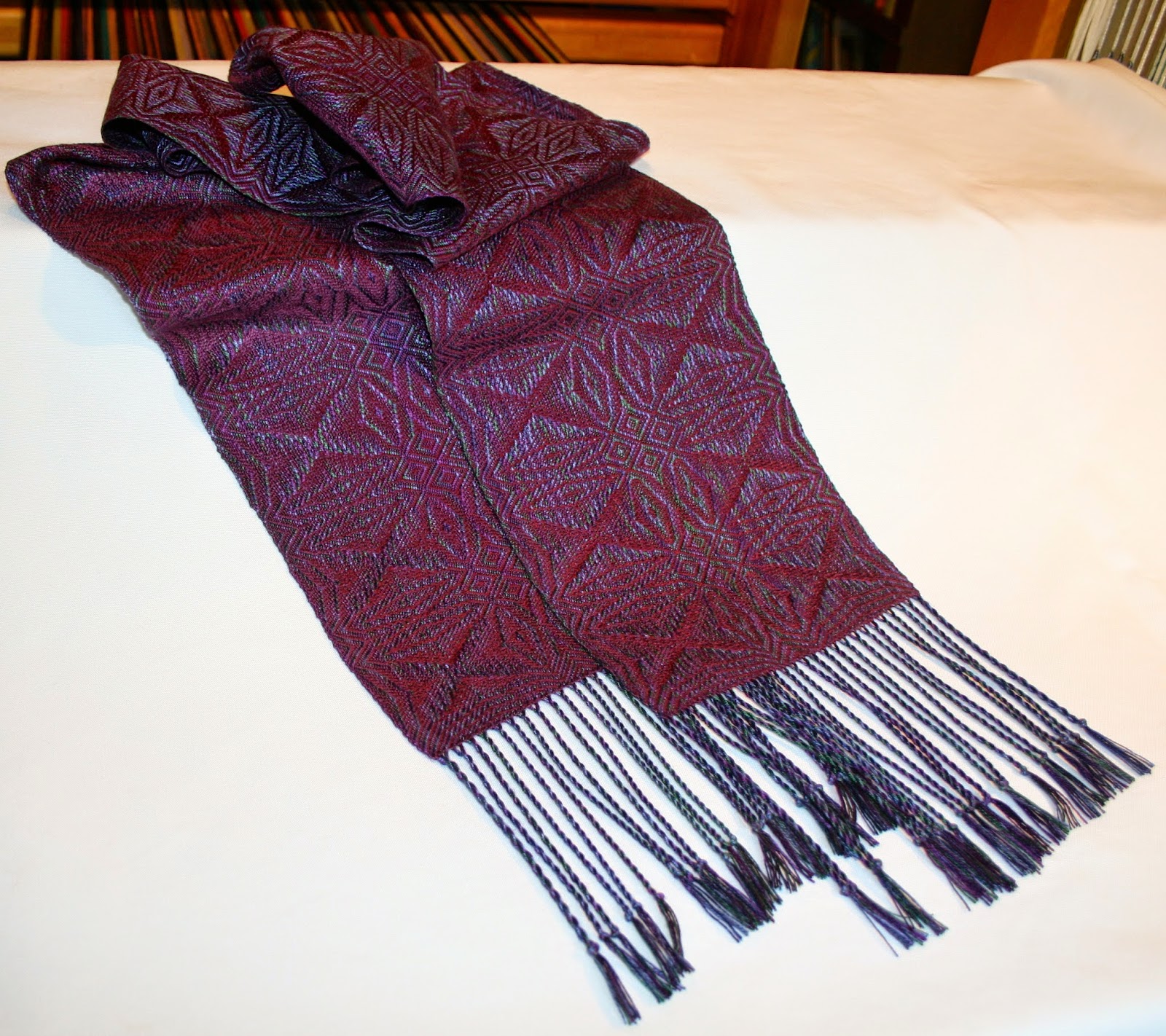 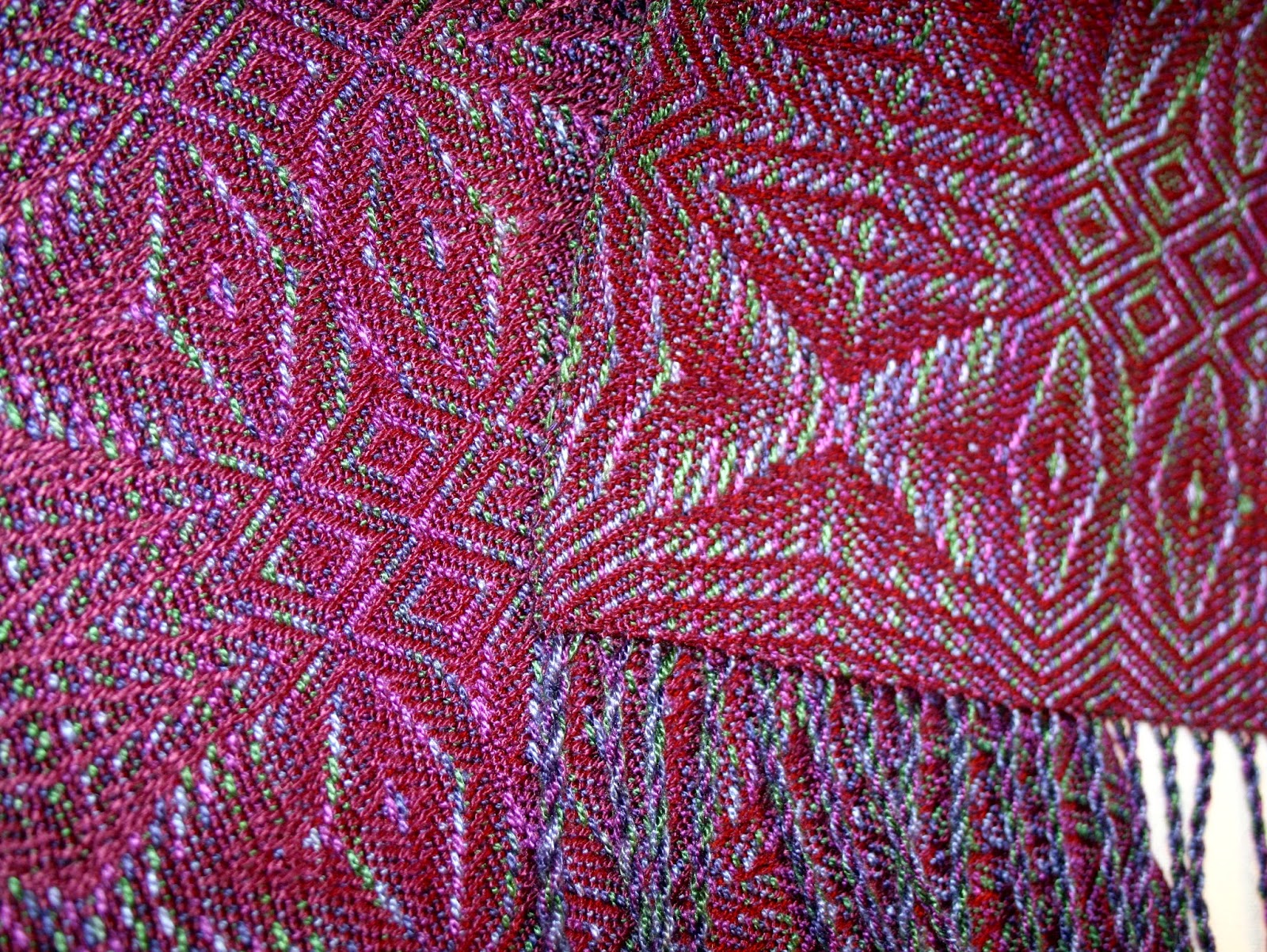 I had planned to do more blog posting but simply put, I have been ill with walking pneumonia and so my energy has been a day by day thing.  That flu/ cold bug we had in August evolved into another situation entirely and I can't seem to shake it.  The cough just goes on and on! That's the problem with a compromised immune system when you have SLE lupus.   Until I finally get rid of the bug, my surgical date will be 'on hold' unfortunately and that will have a trickle down effect on Life.

I am enjoying the cooler temperatures and watching the wildlife around the house. The squirrels are busy in the trees again, and the deer don't even move out of the way of our car when we're using the driveway anymore. 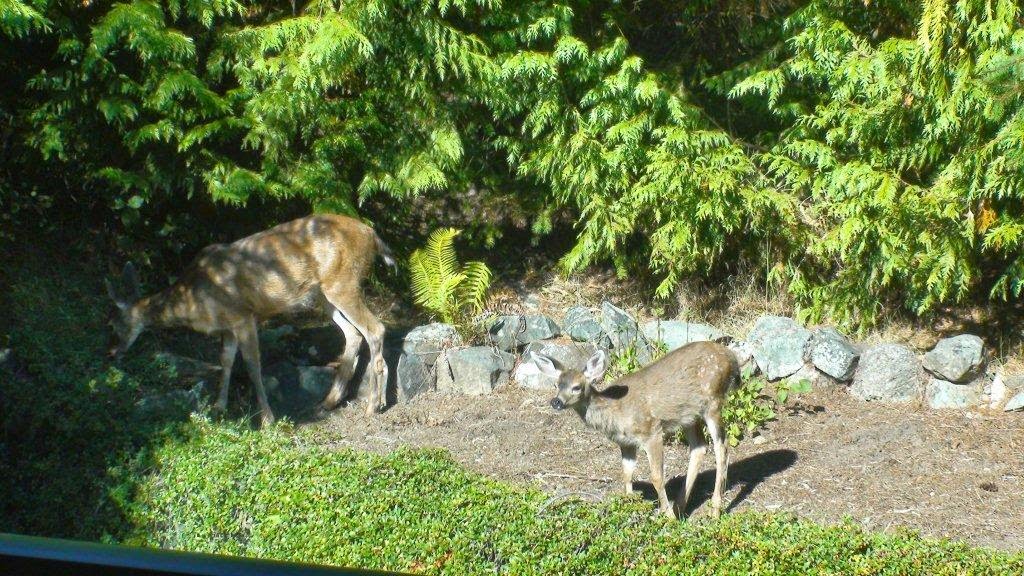 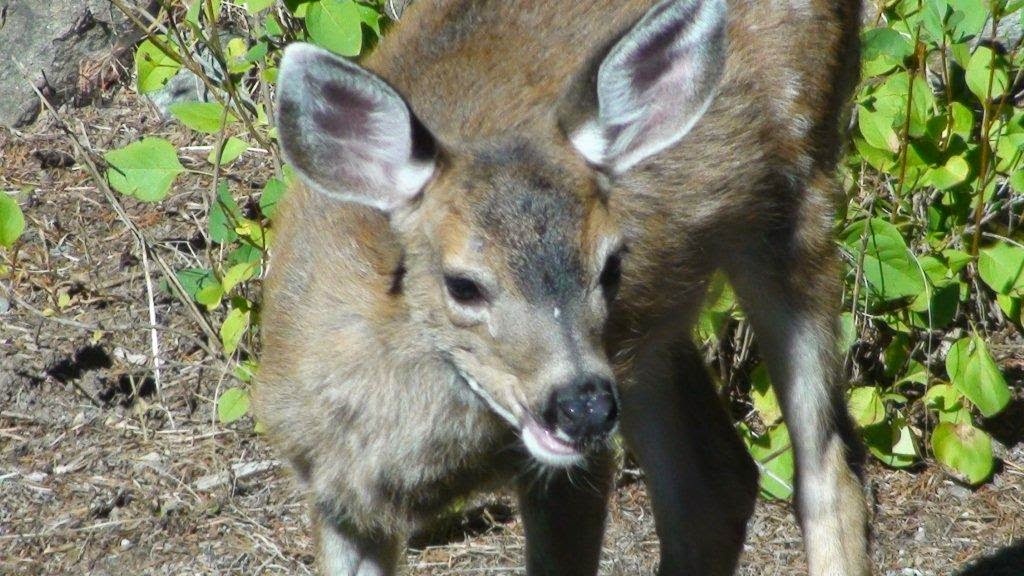 This little critter still has spots on its haunches and Mum is showing them the 'all you can eat smorg" at this nice house with the friendly people!   Don't forget the yummy hydrangea in the front of the house. There's still one bloom left...

Then we came home the other day (driving past the deer that barely moved) to find this fellow on guard duty at the front door.   He didn't move for us either!    :) 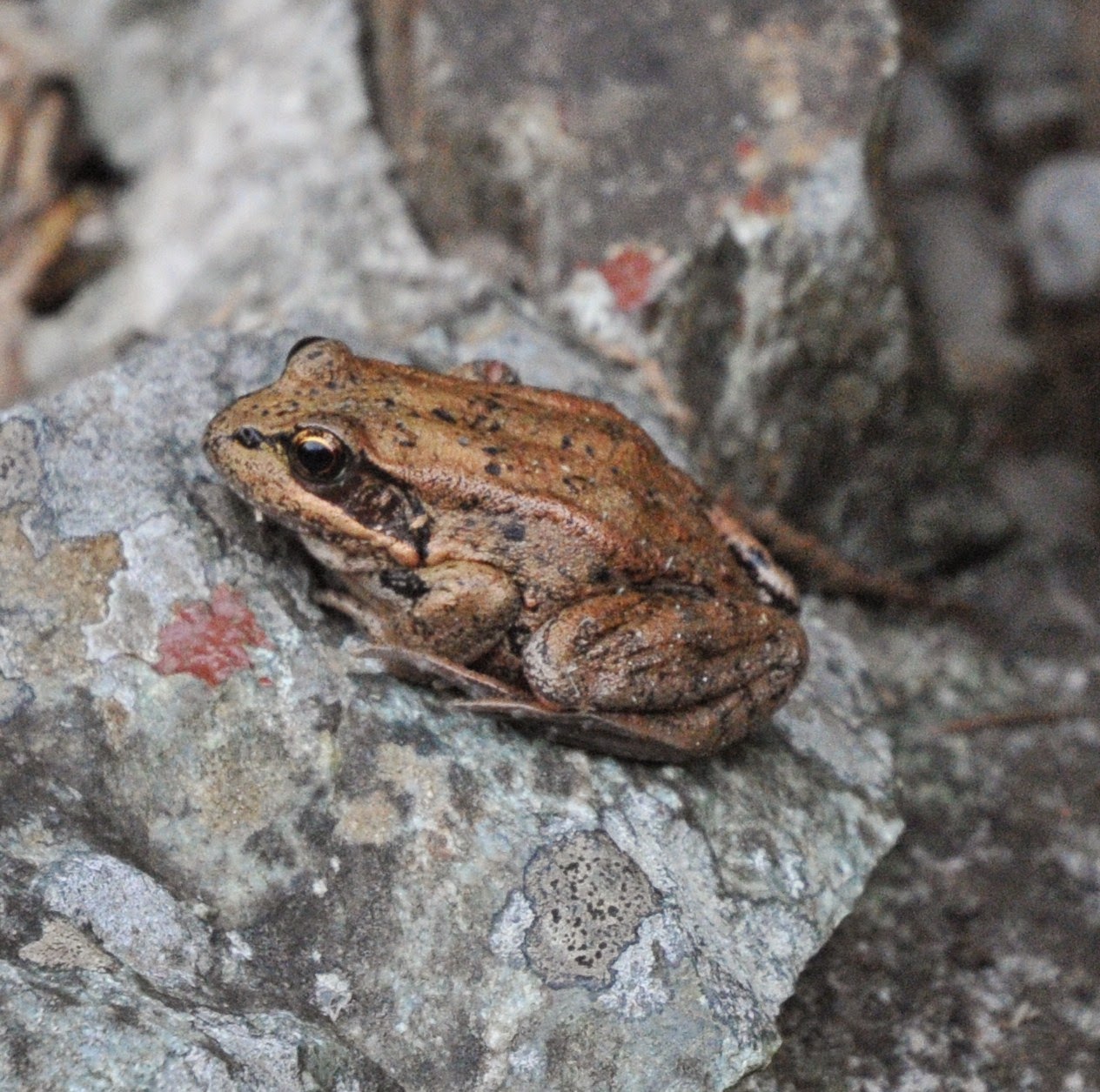 Nice to hear from you again, Susan. So sorry to hear that the pneumonia is still holding on. I check your blog every day for news.

Beautiful scarf Susan! And thanks for the The Nature of Things shots!

Beautiful scarf, colour right-on for this winter.
I know I didn't have pneumonia but I found it helped to heat the lungs ie cuddled a hot water bottle to get the yuk moving. Still coughing a bit - 48 day cough I was told!

Beautiful Scarf Susan!!!! I also love the Sapphire Blue Combo from Webs, I have 3 cones of it in 8/2 cotton. I also found out the deep purples are the best color to use with it.
So sorry to hear that the pneumonia is still holding on. I check your blog every day for news.

Good to know your take on the Bluster Bay Shuttles, it is amazing how much difference the shuttle makes when you are weaving! As always, beautiful scarf.