Fruits of Our Labours

.... and then, just like that, its September and summer is (almost) done. Happy Labour Day !

I would love to tell you that I have been out having fun and playing, but no.  The cold we both caught in early August was no cold and it became apparent that it was the flu and I spent an uncomfortable three weeks where days blended one into another.  I literally did not leave the house for three weeks and when I did, I felt like I had been beamed in from another planet. I had gone for groceries and left a still sick Bruce at home as he was about three to five days behind me. I rallied and started to feel a bit better and even spent time weaving, but a nasty cough reappeared and has stayed with me.   A chest x-ray later and it seems I have walking pneumonia now. So more rest and so on....    I would hate to still have this when they finally call me for my knee replacement operation as I would have to pass and wait again!  I'm one of those people with a compromised immune system so getting well is a longer go for me compared to other healthy folks.

So when I was feeling a bit better, I did get the third instalment of the runners loaded and underway. This time in a deep rich red called cerise. I wove a batch of these last year (draft there at the older post) and they sold quickly for Christmas and I thought I would try them again.   So to review:  the yarn is 9/2 French linen from Brassards in Quebec, sett 24 epi, and an eight shaft diamond huck lace.  I love this pattern as it gives an all over lace effect and is stable due to even placements of plain weave through out.   The linen weaves up beautifully, and is very satisfying to hemstitch as it stays tight and neat.    Yes, it does lint a bit and I had to vacuum off the loom after each runner.   I also ran the weft yarn through a damp cloth as I wound the pirns to help reduce the lint and  tame its wiry 'behaviour'.

I love the linen,  and the huck lace but I'm so done with it now and ready to move on!

I also have a new gadget in the studio: 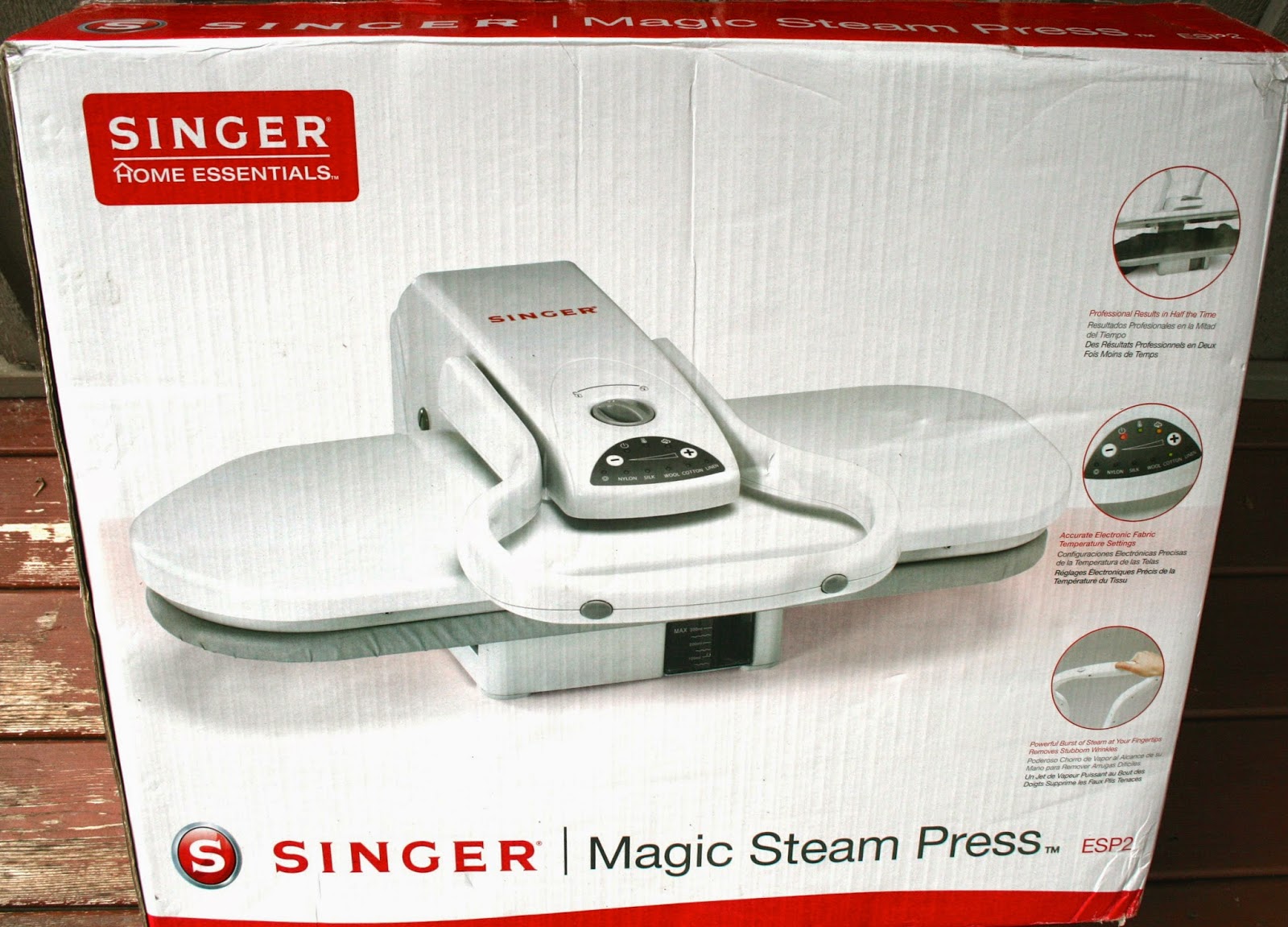 I found trying to hard press the other linen runners literally gave me  'arm ache', so Bruce said to order a press and he'd pay for it.  What a sweetheart! Some research and price comparisons and we got this one on line. Lynnette has one and had lots of good things to say about it and she has no regrets on buying hers. I would tend to agree and wish I had done it a lot sooner!

After the runners came off the loom, I serged them apart and prepped them for hemming. Once my straight pins were in place I gave them a quick touch in the steam press and  spent a couple of evenings hand sewing the hems neatly.  There is something so nice about plying a needle and thread.

I filled the laundry tub with warm soapy water and left them to soak for half an hour and when I came back, this is what I found. 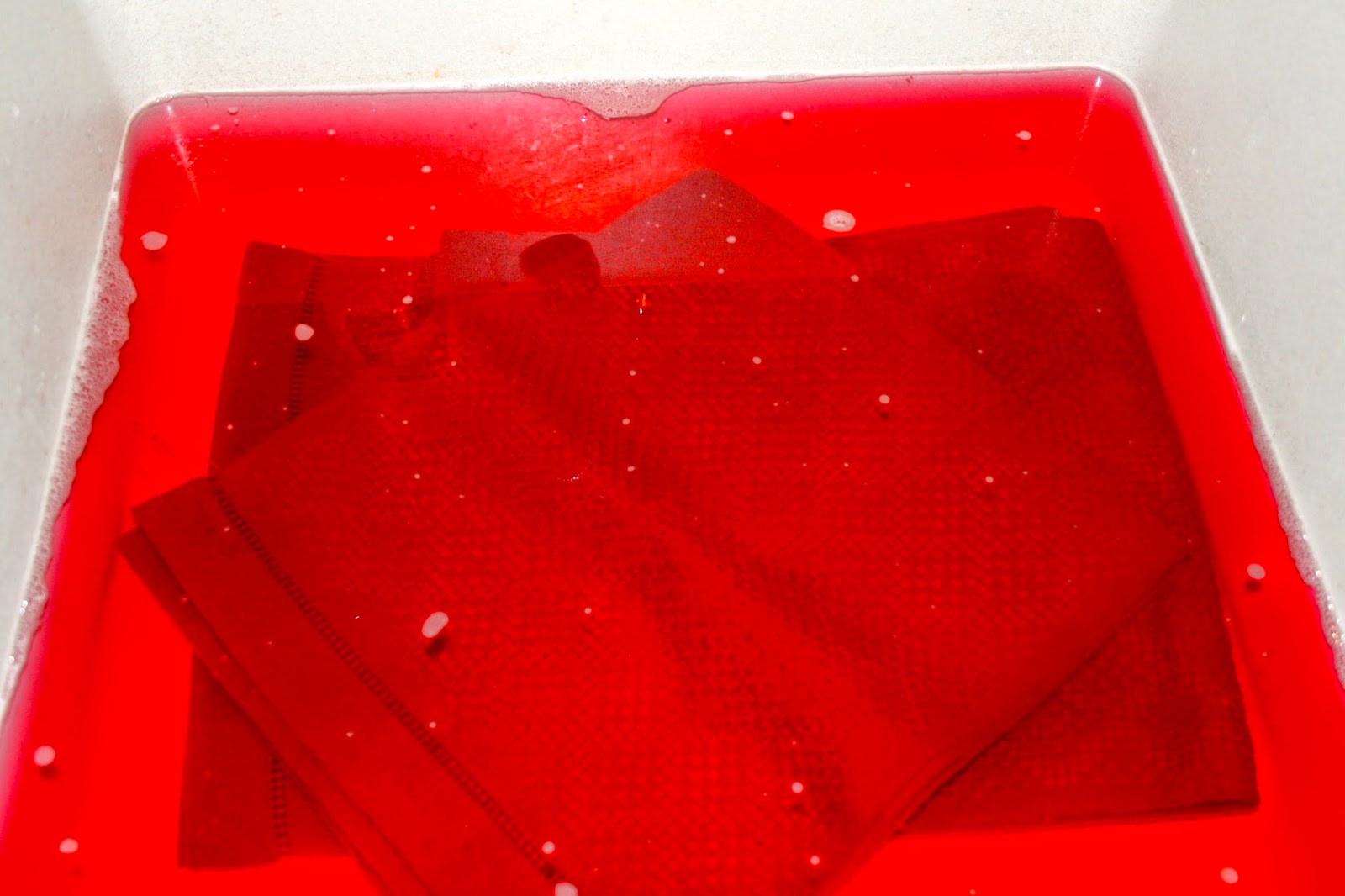 I gave them a good squeezing out to shift threads and get the excess dye out and rinsed very well. There was still some pink in the last water so I will mark these on the tag as 'hand wash separately' for sure!  I don't recall my last batch of the red runners being quite so bad for fugitive dye.

I rolled them into spare old towels to absorb the water and later before I was done for the day, I smoothed them out to dry overnight on towels on the ironing board. I gently shaped them and tugged them to the straight edges and corners I want to see in the final runner.   I also neatly nipped off any weft yarn tails as well. 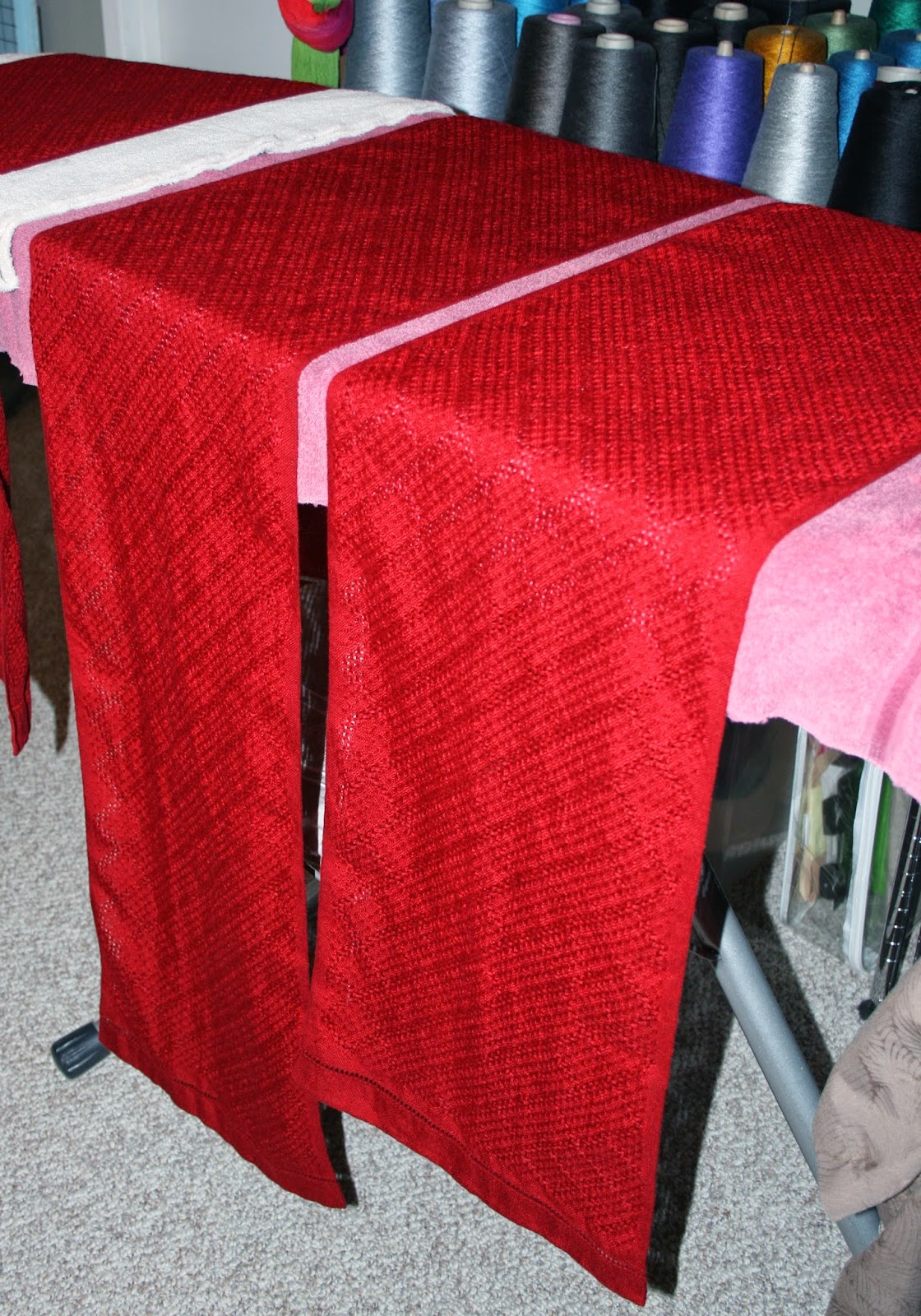 The next morning I set up the press on top of the ironing board. I have to work out a better spot for it and that may be upstairs and work on the big kitchen counter. For now this set up  will work as I knew I wanted to give them  a final press with the hand iron afterwards. 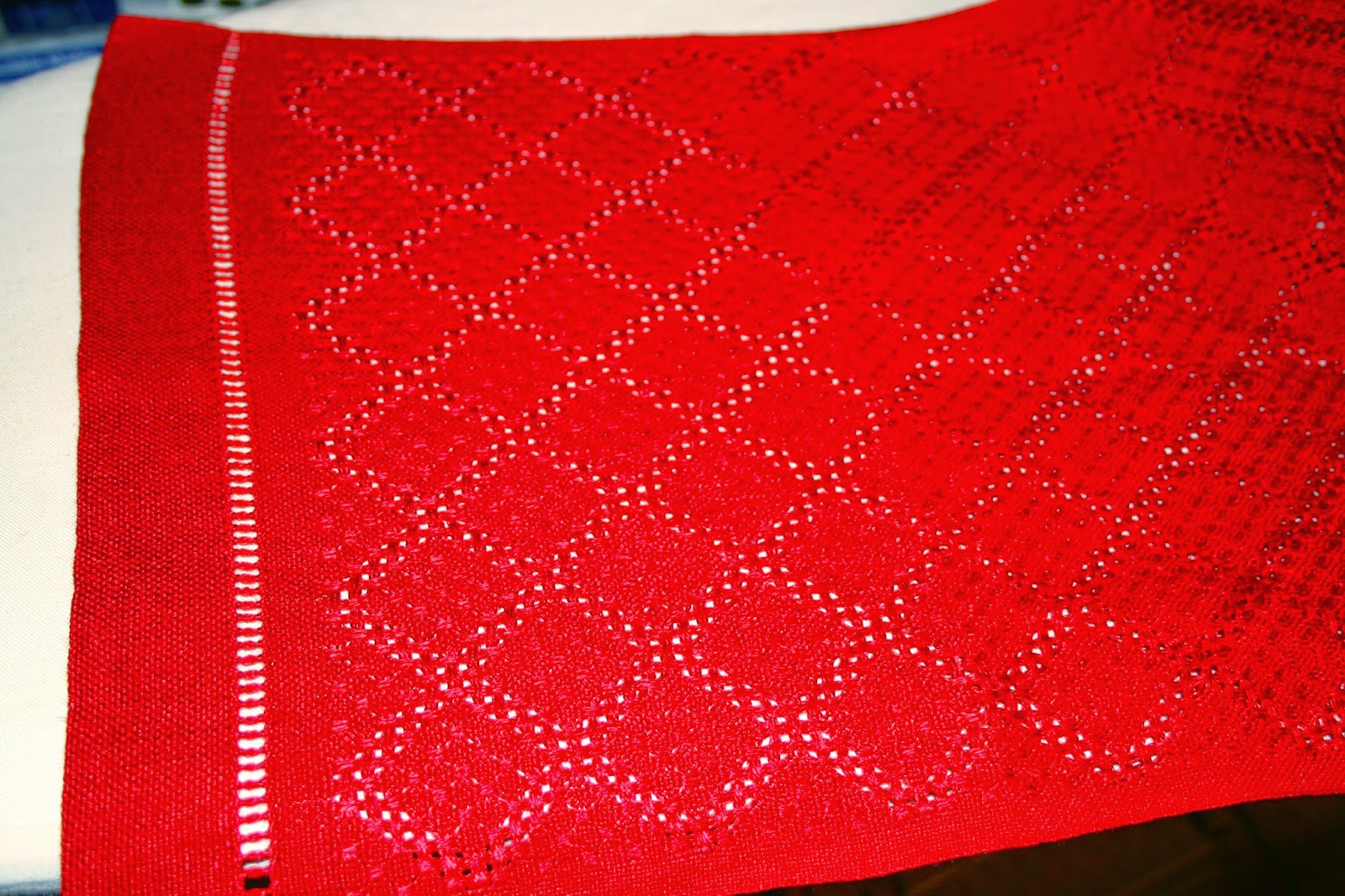 I hope you can see this okay (maybe click to enlarge?) but I had positioned and pressed the end hem and approx six to eight inches. There is a line between the newly flattened linen and the bumpy textured cloth on the right hand side. That's one press for about five seconds, using  spritz of water on the cloth first and additional steam. I rolled up my metaphorical sleeves and got busy pressing the runners end for end and both sides. 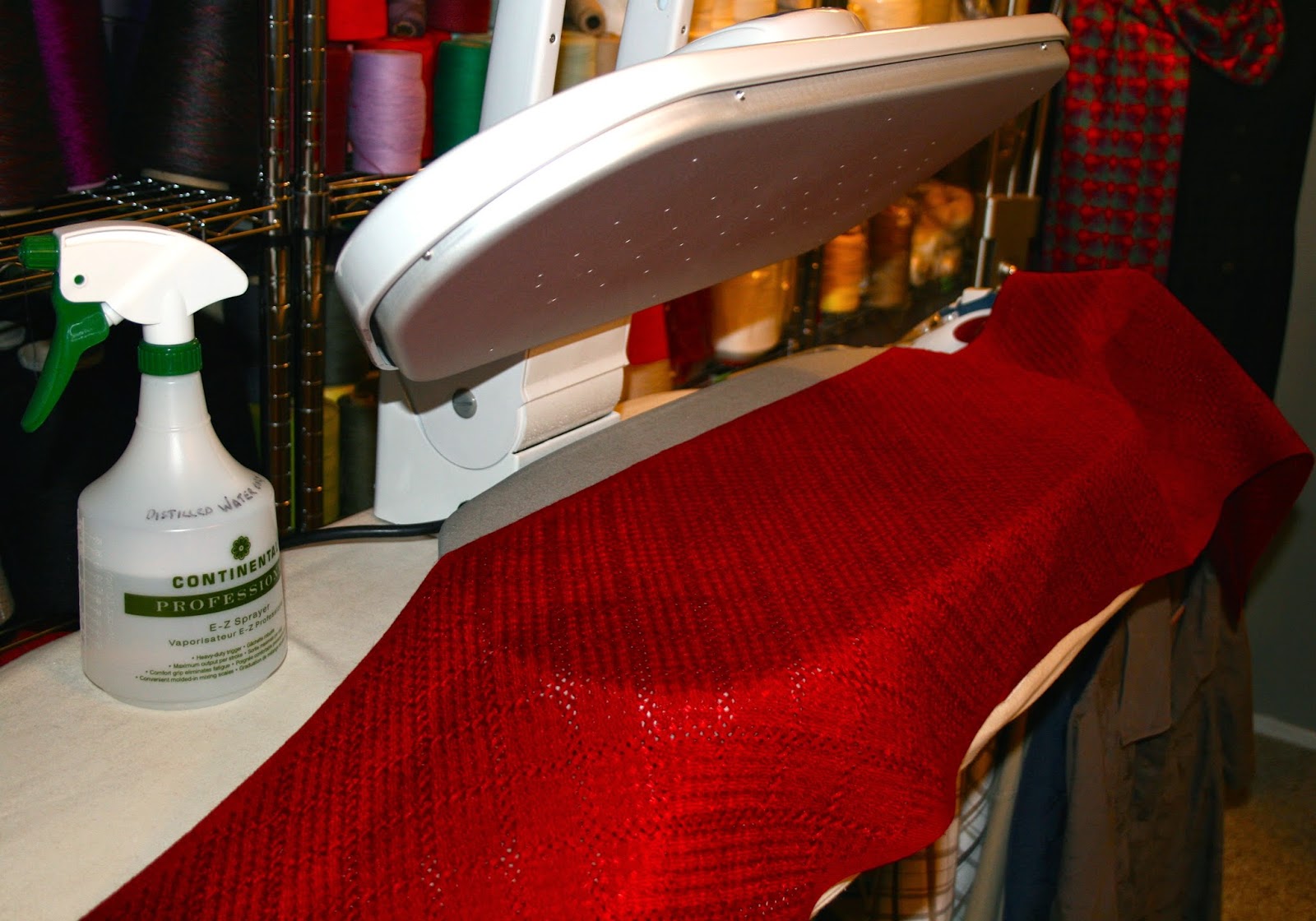 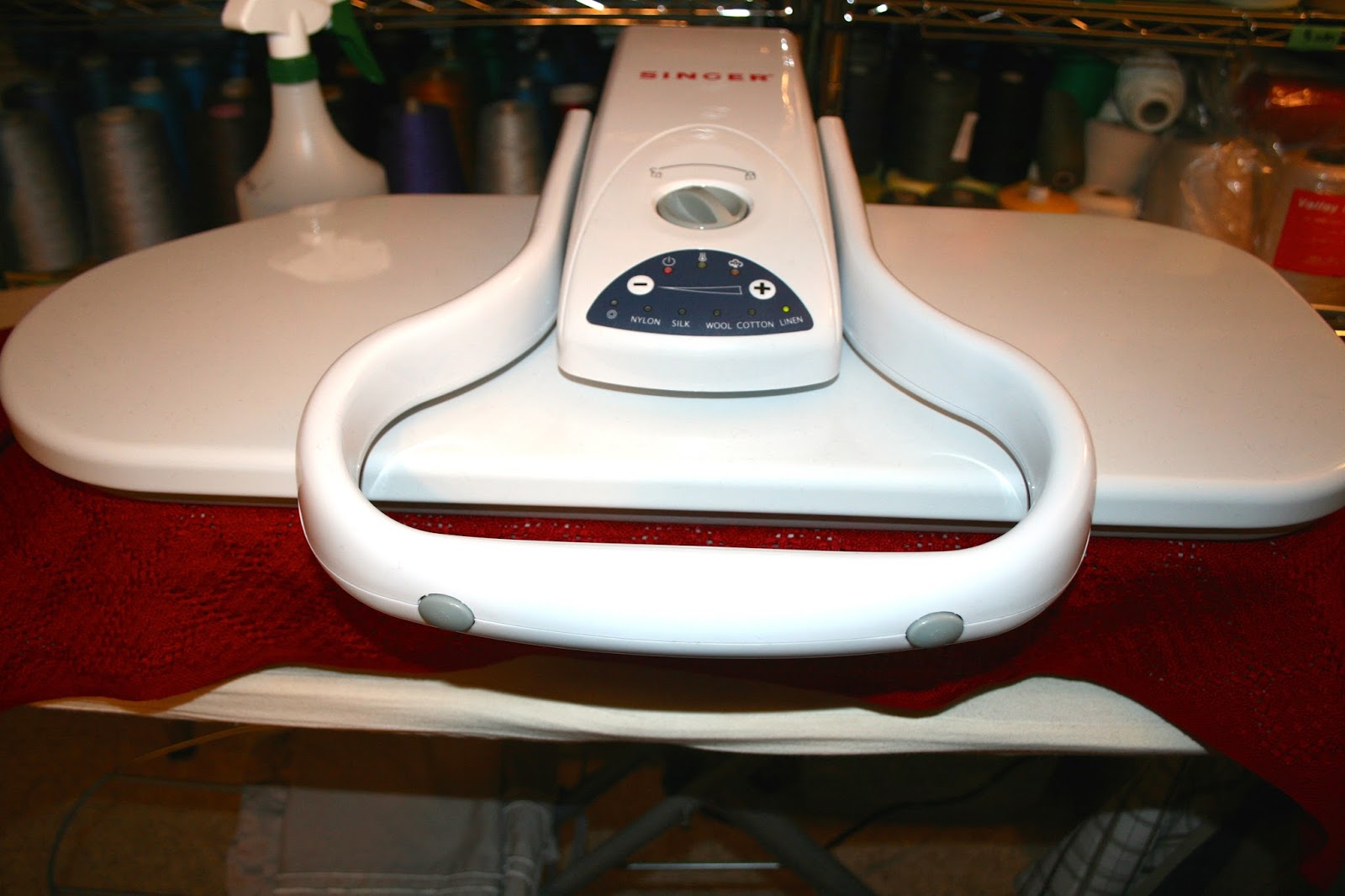 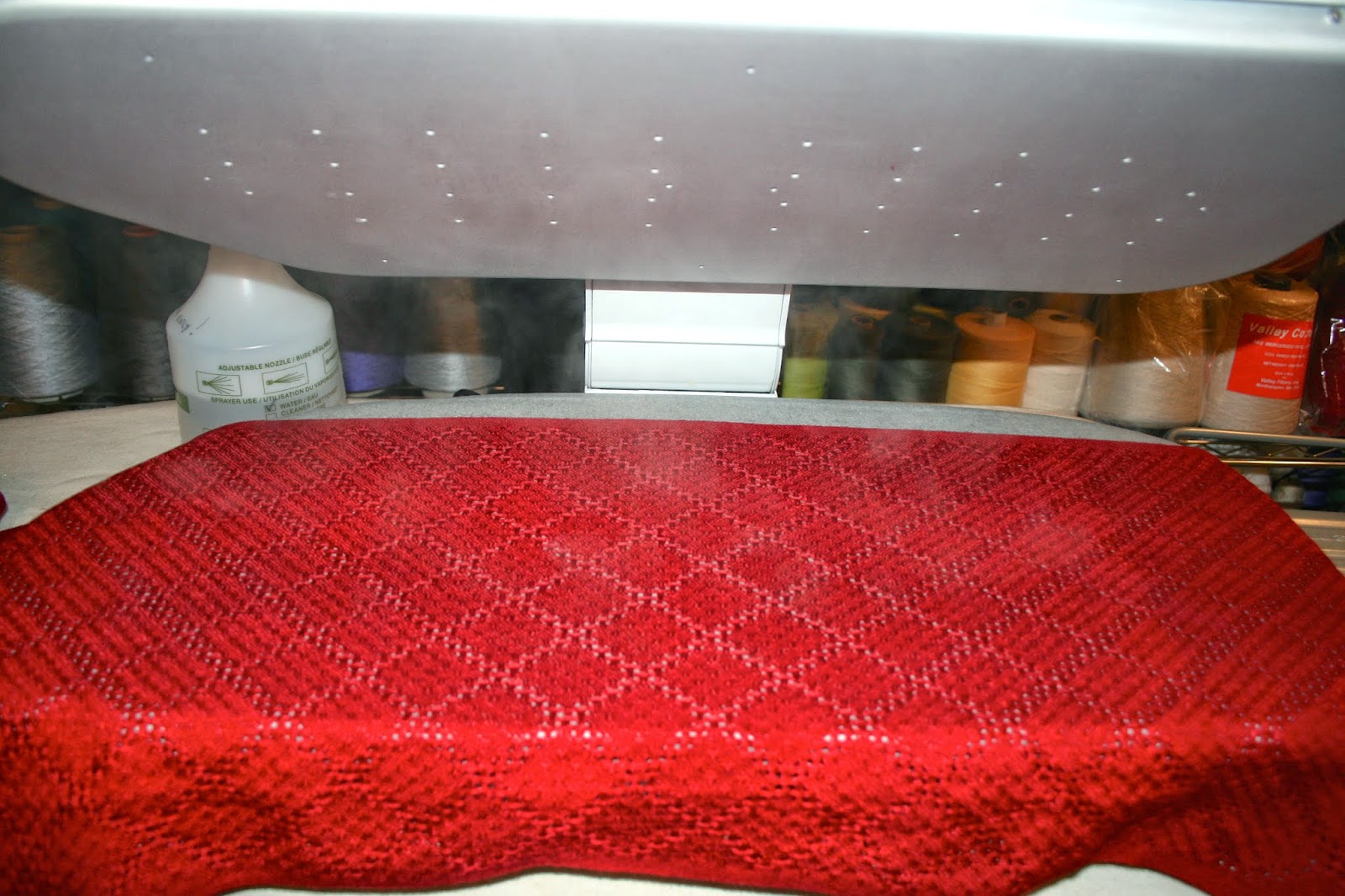 I'm still new to the machine so in time I will learn all the tricks to do a better faster job. I tried rolling the runner and tucking in behind the pivot but there was too much material. I thought I could just unroll a section at a time. Nope!  Then I realized there would be a crease line regardless and so just did the easy pull through as shown above.   The press did a beautiful job of flattening the cloth but there was little to no shine.

I tacked on my "made by..." label and then fired up the hand iron.   I didn't have to give that heavy downward pressure this time but simply smooth and bring out the shine. What a treat!

So here are the beauty shots: 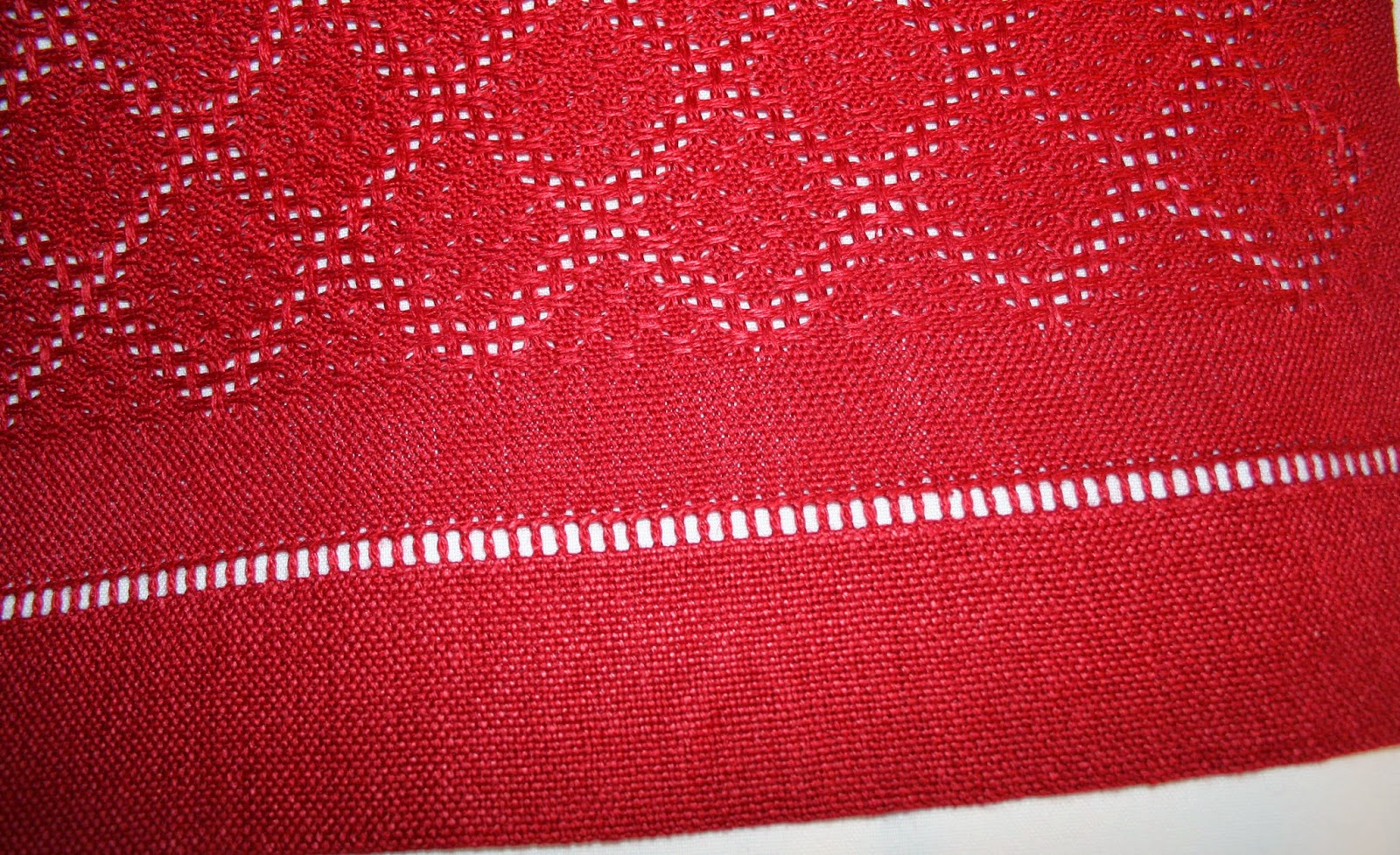 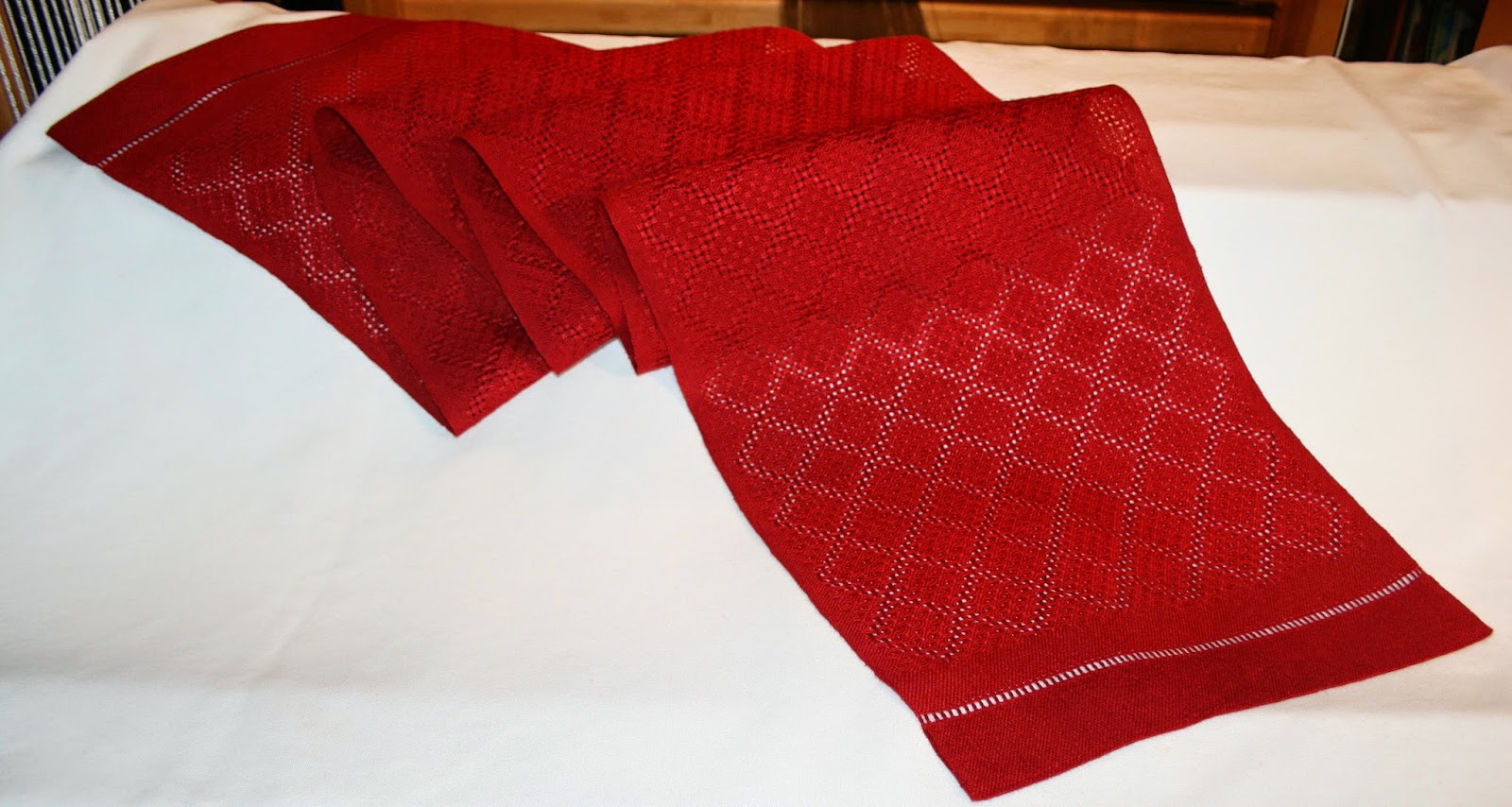 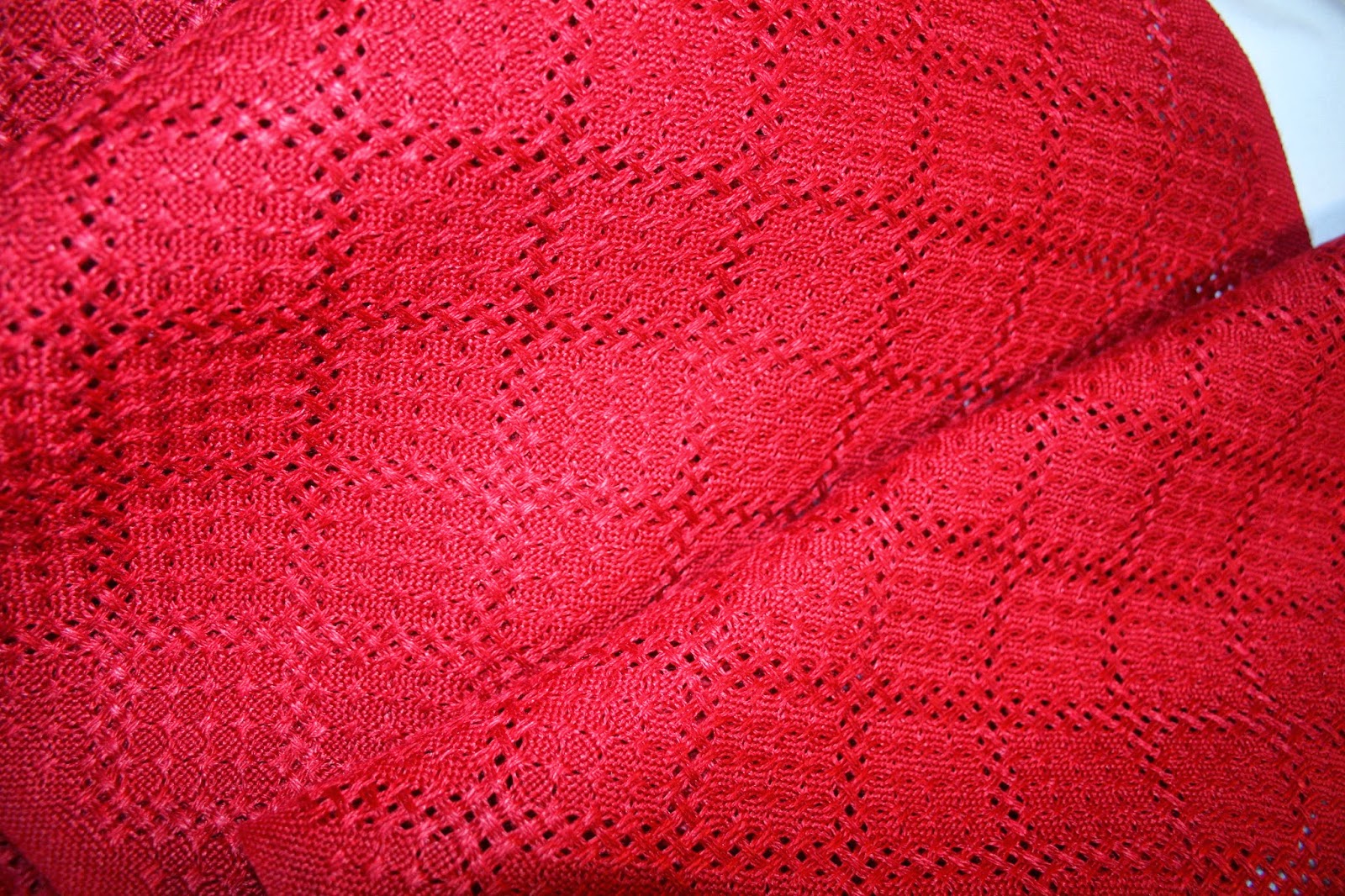 So what's next? I have some ideas and I thought this might look good as warp.... its a variegated tencel called Sapphire Combo. 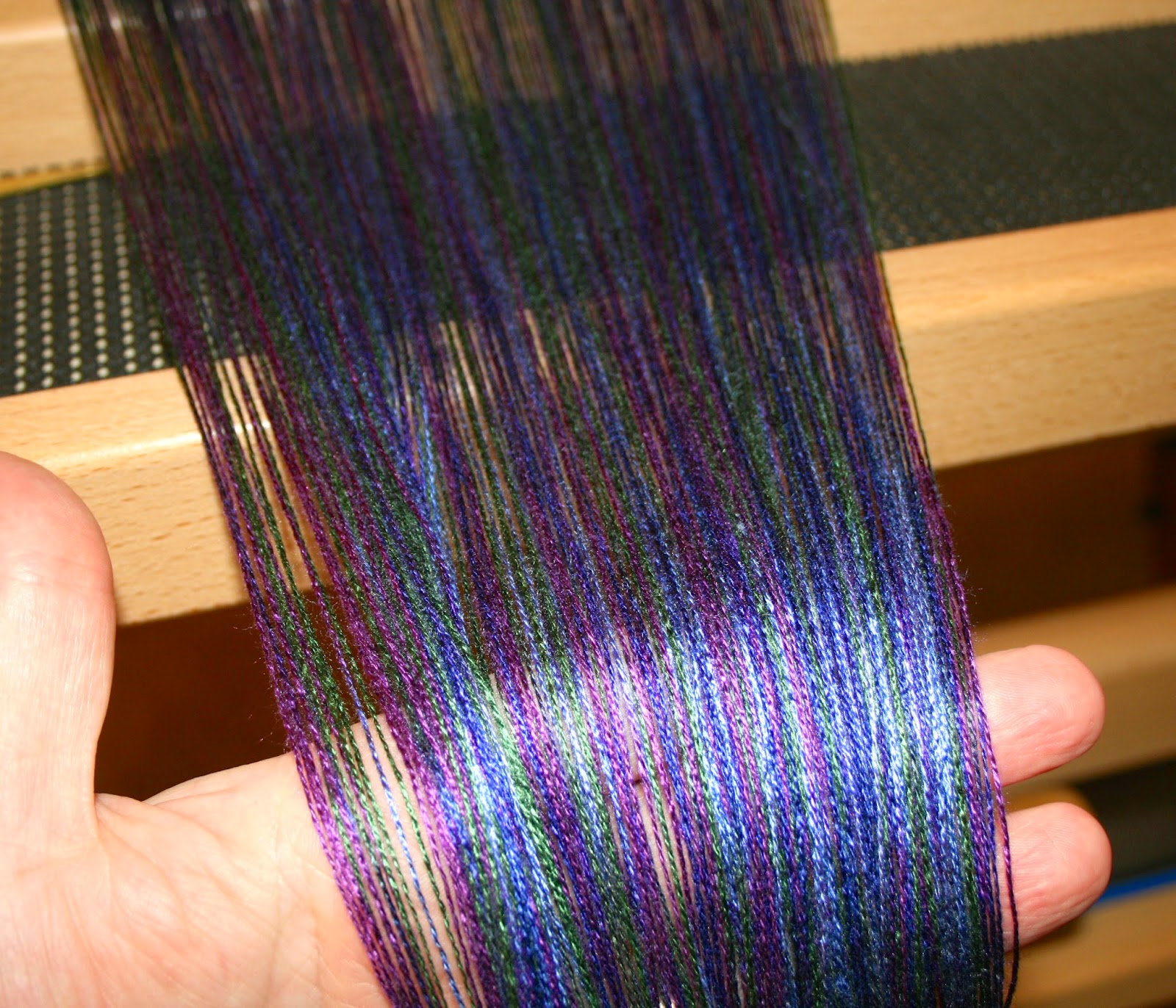 Goodness, a nasty flu bug. I know what you mean about immune system - me three week recovery, Pete one day! The complaining is about equal.
Love the look of that press. One day soon I'll be trying weaving with linen.
Get well quickly.

Hi Susan - So sorry to hear that you and Bruce have been hit hard with a flu bug, and now you having "walking pneumonia"; that is no fun. Yes, you will need to get lots of rest to get rid of the "walking pneumonia"! Your red linen runners are beautiful, and how lucky to get a press like that! Sure seems to make the pressing go a little easier; though you said you needed a regular iron to get the "shine". Interesting. Please do take care and I hope you and Bruce are back to 100% in the very near future. Yes, you need to be well by the time the call for surgery arrives. Take care and all the best. Weaverly yours .....

Your linen runners are stunning Susan! I'm gobsmacked at the amount of excess dye that came out ~ seems that red dye almost always runs!

Hope both you and Bruce are feeling better soon.

Sure hope you are on the road to recovery and feeling much better.

Love the red linen table runners. I think I might have steam press envy!

The new varigated tencel is lovely, I look forward to seeing what you do with it.