Taking Her Out for a Spin 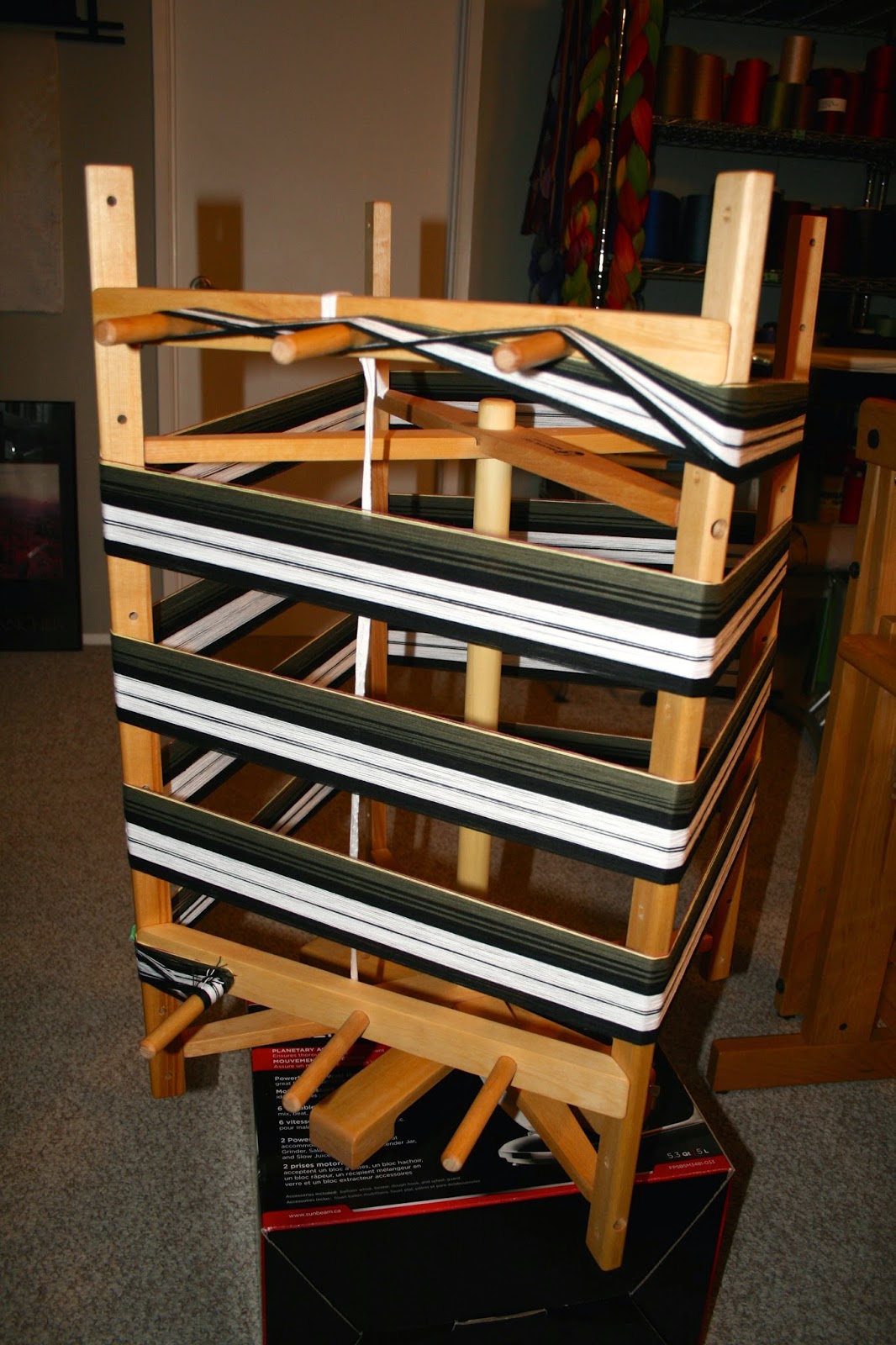 I have a new tool in the studio!  A warping mill or warping reel.  It has a two yard diameter and can hold up to 20  yards. I suspect that would be rather fine stuff!   The yarn in the pictures is eight yards  of 8/2 cotton for a future  plaid project.  It was a bit awkward at first and by the end of two full bouts of my four to be done, I was a whirling blur and landing the sweet spots on each corner! 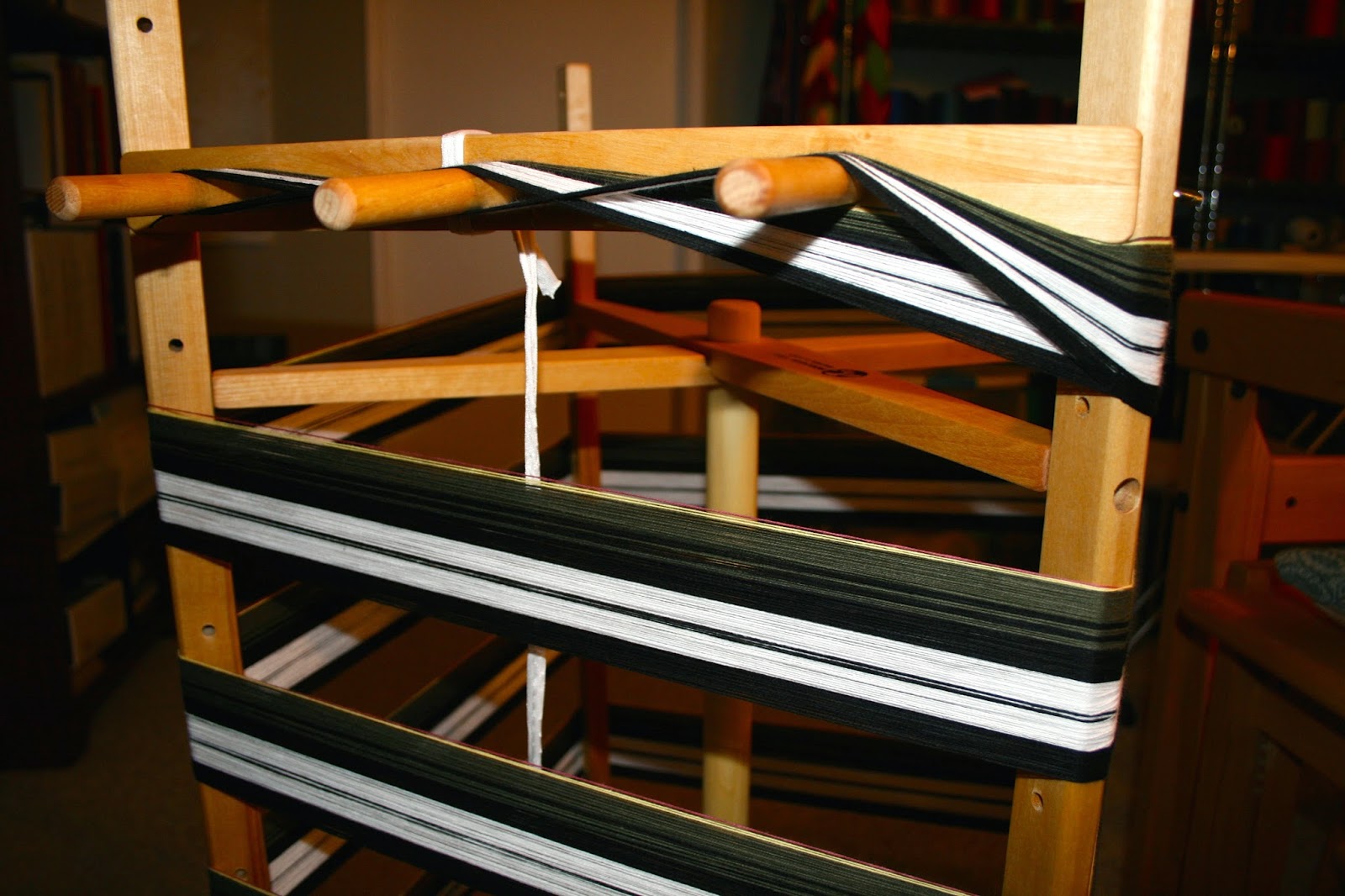 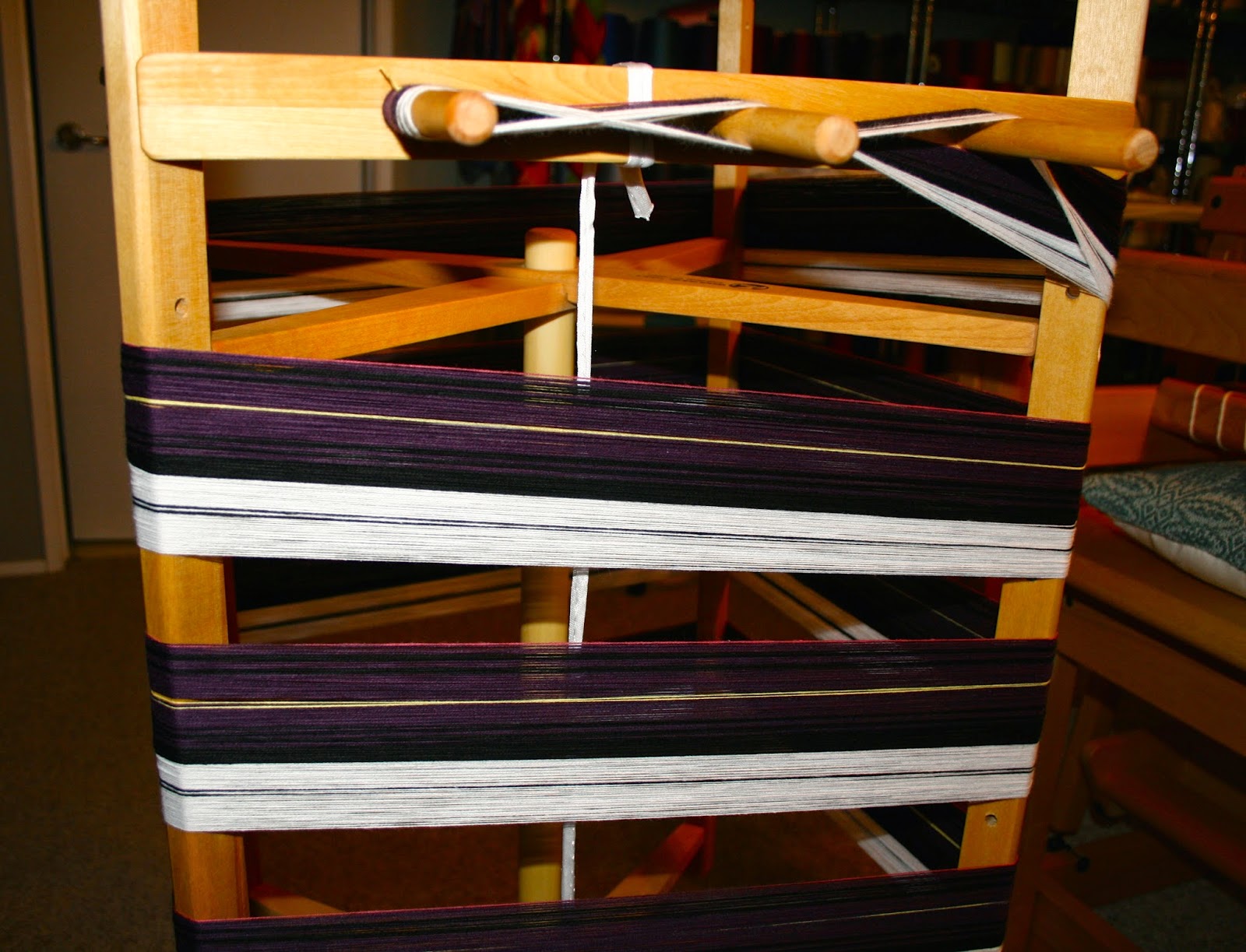 My desk is a bit too high for the mill and keeping it on the floor was too low. So it was very handy to score the large carton you see in the first picture as its the right height now.  That box had Bruce's recent birthday gift of a new skookum Sunbeam  table top mixer.   He wants to make his own bread and I think that's a marvelous  idea. { 'skookum' is a Canadian term for something that is wonderful!} 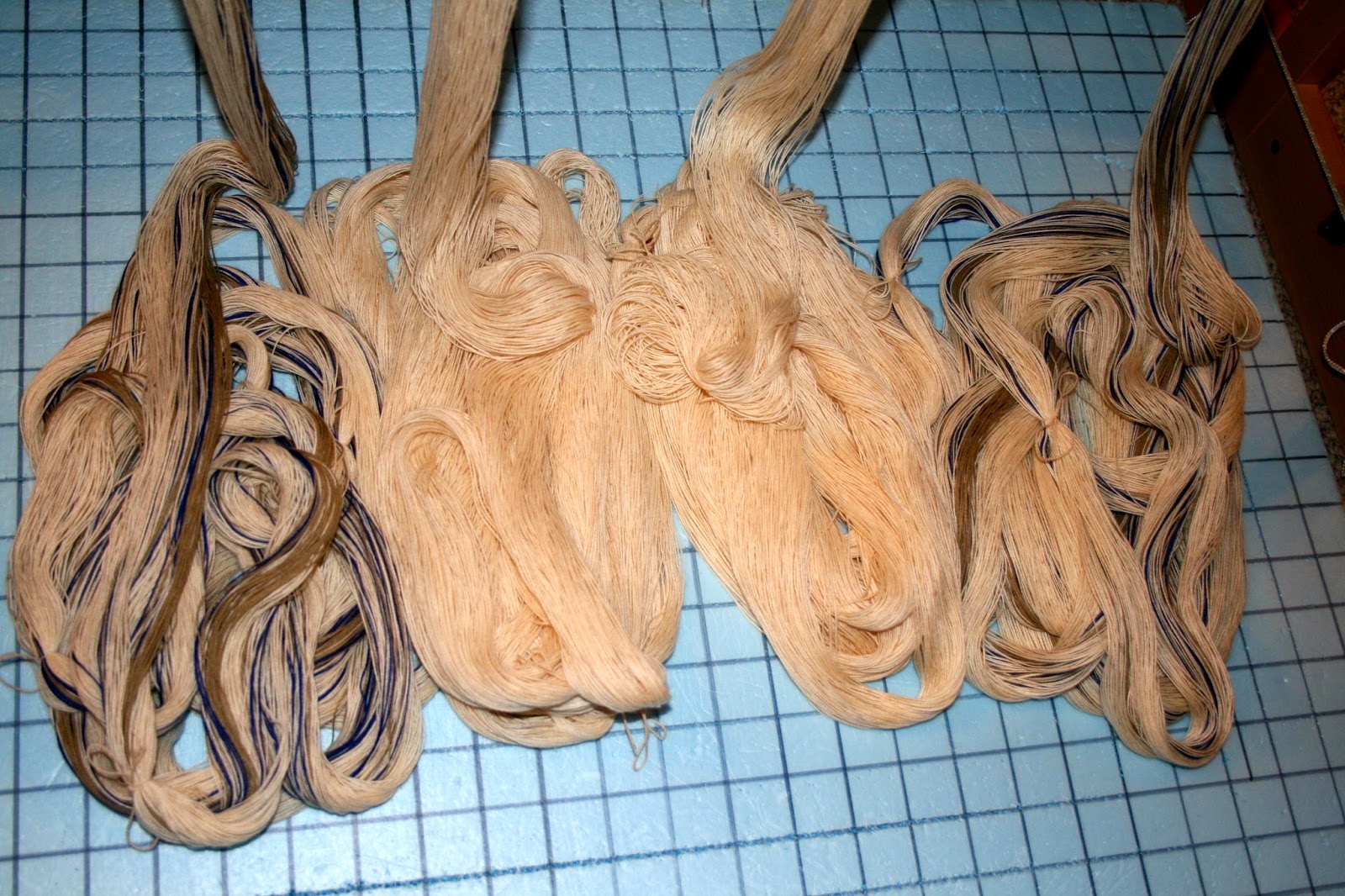 What's on the loom now? Well here's a sneak peak.... yup, more 8/2 cotton.   Approximately eight yards of it for seven towels. Half dozen for the Etsy shop and one for us, plus some samples (or a bread cloth if there is enough warp.... fingers crossed!). Weaving is under way now and of course, the knee sets the pace. My right side feels fine now and its like nothing was done three months ago!  Just a wee bit of swelling late in the day but it doesn't hurt. 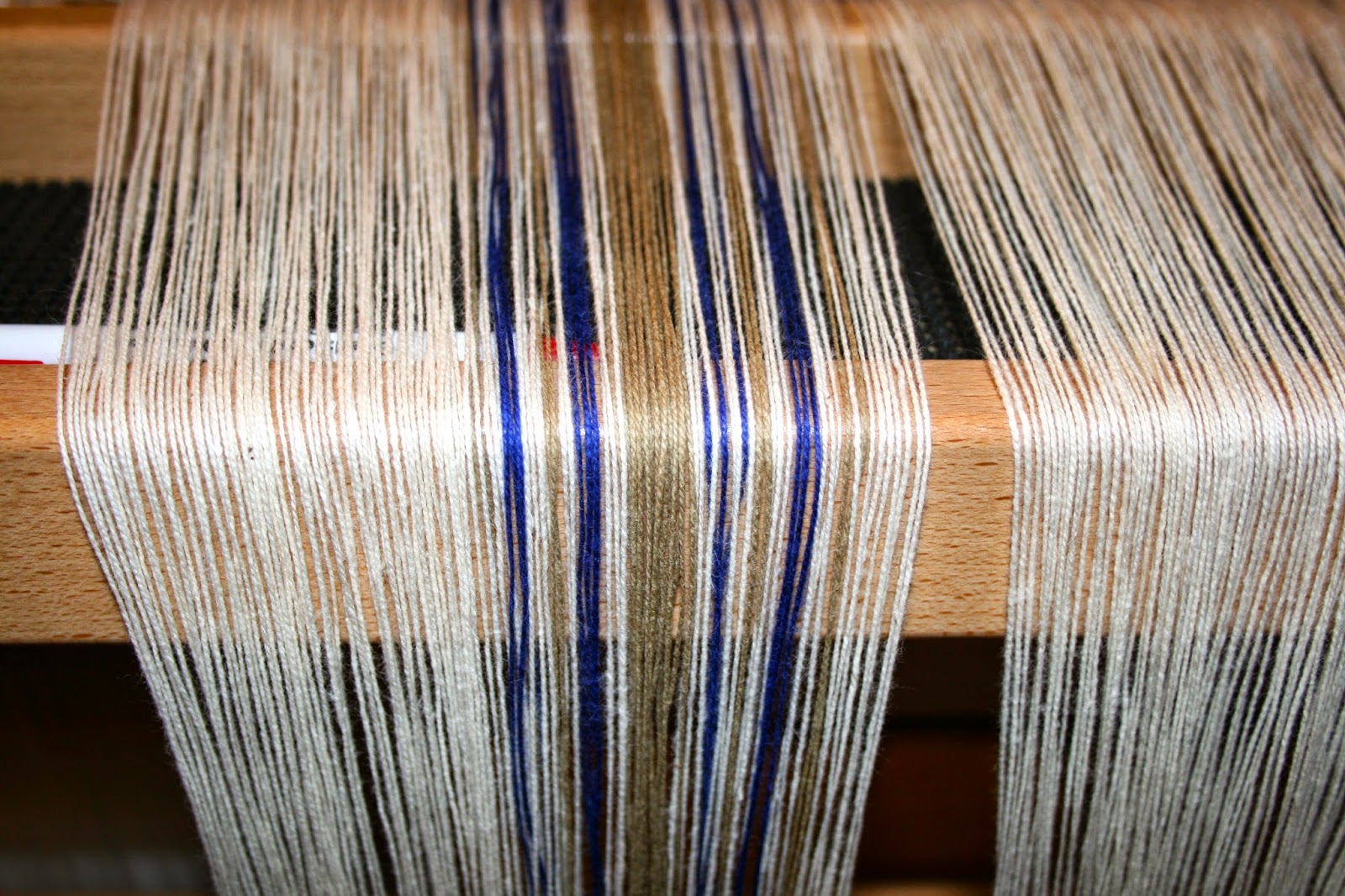 So this was my last warp wound on the warping board for some time.  It was peculiar  and long time getting it done.  The 600 +/- ends were done in short sprints where I would stand and wind like crazy and then sit to take a break and rest my knee.  It took many days to get done.  I ordered the warping mill on day one when I saw the difficulties.  May I also add that the warping mill is on sale at Woolhouse Tools so that was a nice surprise! 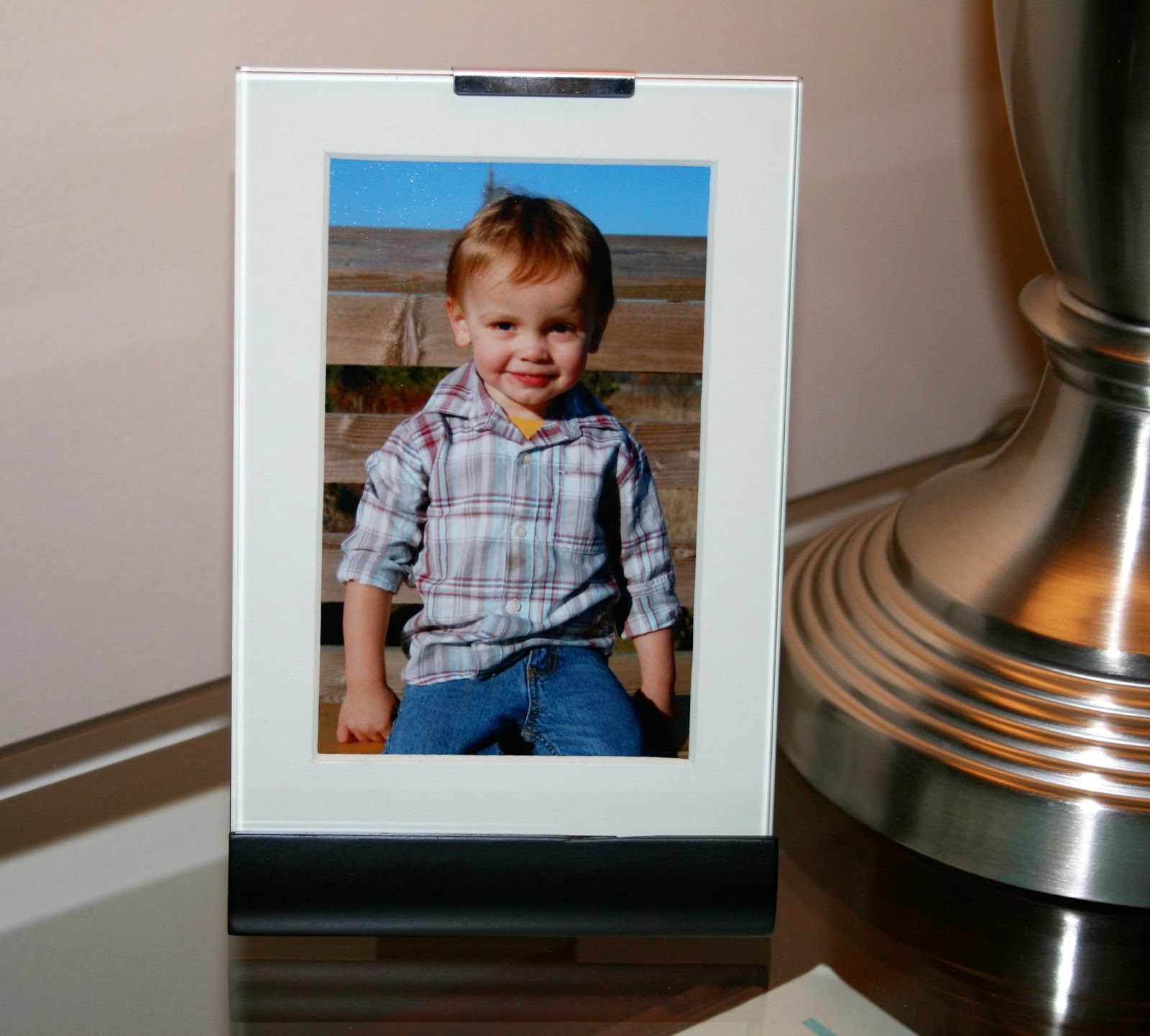 Nana bought a new frame for the latest picture of our favourite grandson, Ethan.  He will be three in mid April.  Where has the time gone?  I actually bought two new frames.... as our new grand daughter and Ethan's sister will be born tomorrow by Cesarean section.   Her spot is there next to her brother already...    Yes, you can expect baby pictures next post!  Her new blanket is wrapped and waiting for her arrival. 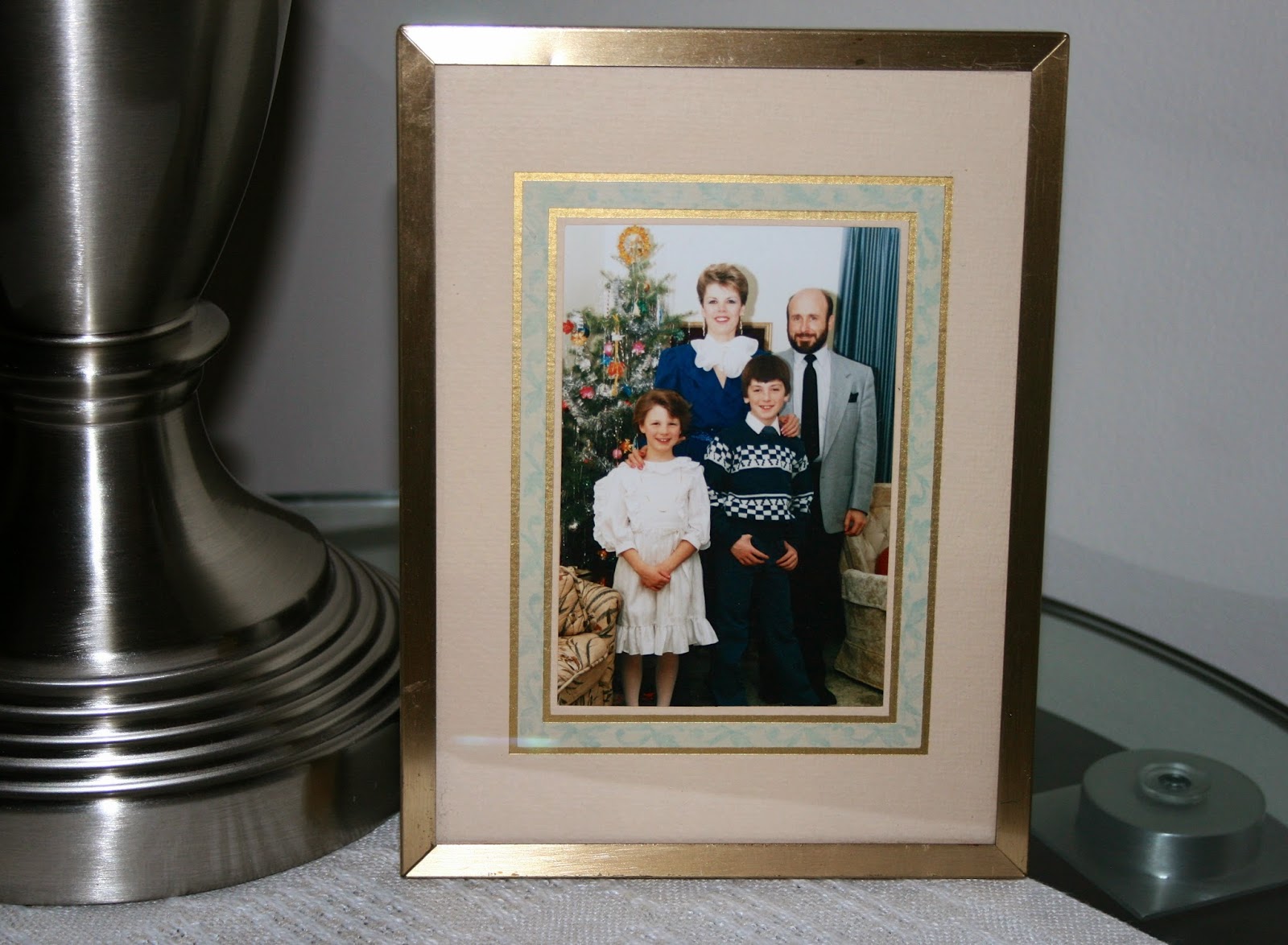 Speaking of time, here's another picture.  (click to enlarge) That's my son Chris (who is Ethan's Dad)  and my recently newly engaged daughter Carrie,  with Bruce and I back in  approximately 1987. Yes, I'm wearing a pair of 'high' high heels and so not normally that tall next to Bruce. We were at a family member's wedding. 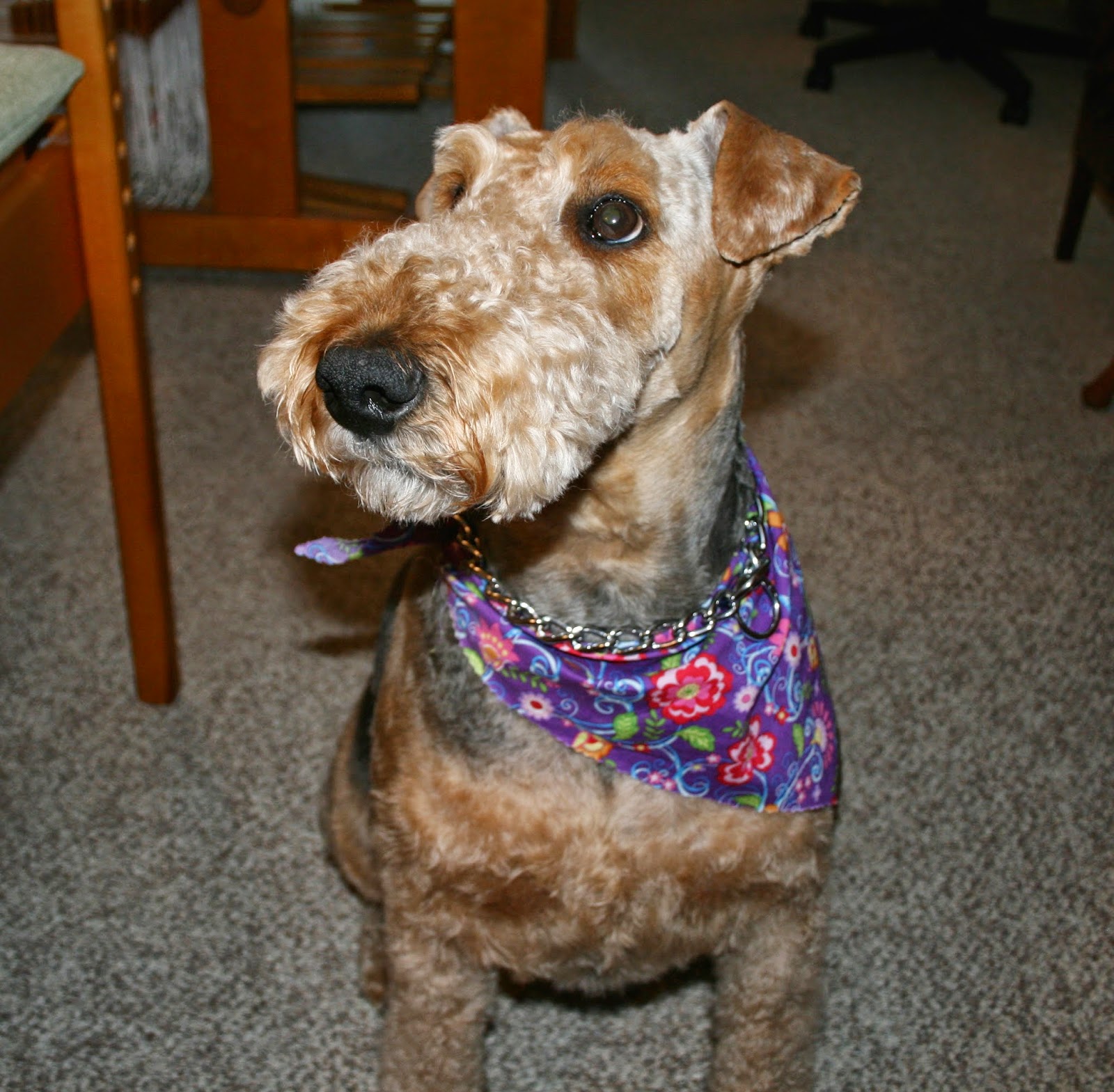 Yesterday, Calli went and got her spring haircut and came home with a girly floral bandana. She had 100% more energy and raced around the house.  She's coming up to being five years old this spring.
Our weather has been unseasonably warm and so she had to get all the long hair off.  (Sorry if you still are surrounded by snow banks, or heading into winter down under).  Our part of  Canada has enjoyed a mild winter with only one or three small snow falls and only one serious cold snap. 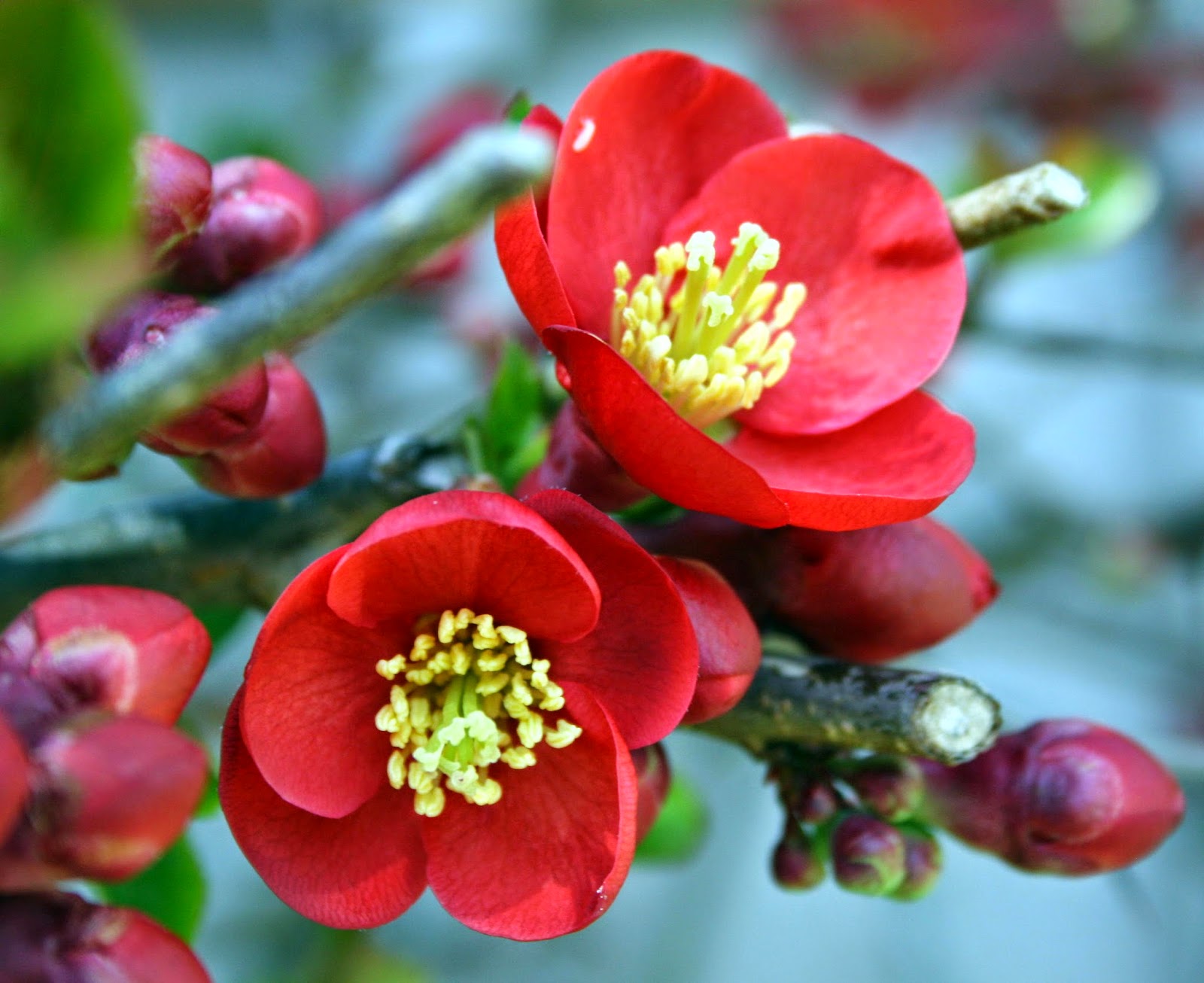 Our quince bush is blooming....    Have you considered moving? Its truly beautiful here.....
Posted by Susan at 12:41 AM

Hmmm . . . I have a warping mill that I got when I bought a second-hand loom but I haven't tried it yet. I'm very intrigued! SO much about weaving is new to me so far--I'm taking it one step at a time!

I found my kitchen table to be a comfortable height for winding a warp with the mill. Glad you adapted quickly and can wind a warp without stressing your new parts and the parts that are soon to be replaced.

You must be so excited for that new grandchild! They're fun, aren't they? Here's to a smooth delivery, and a happy, healthy baby!

With regard to the picture of you and your hubby, it appears that your hubby then and my hubby now share a hairstyle (except my hubby's hair is mostly salt and pepper and his beard is white.).

I'm glad you're recovering well and able to weave a bit. I look forward to the glorious fabrics that emerge from your looms.

Very happy to hear how well you are now feeling! The warping mill is perfect, I must invest in a better one. Calli can't be 5 already! Wow, where did the time go? Happy Birthday Miss Calli

Susan - I'm amazed that such a prolific and wonderful weaver has not had a warping mill before now! I was able to get a Harrisville Designs mill at a good used price when I first started weaving, and it has made long towel warps easy peasy. I regularly wind 14 yard warps of 2/10 cotton, 100 thread bouts at a time. I use a plastic milk crate as a prop and wind while watching tv. I'm so glad to hear that you've recovered so well!

Your warping mill looks great! Mine has a little over 4 yards in circumference. I use a beam to stand on to get up to it's highest point, and a small chair to sit down on when I use the lowest part. Lovely to seet he flower photo, spring is still very far away here.

Well, actually I did have a warping mill before. I inherited a large Glimakra mill many years ago and it was huge! It end up being a place to hang shorter warps I wound on the warping board where I was much faster!

We moved and it was sold as it took up a lot of floor space... another drawback!

I think this smaller model will work just fine!

I do envy you your warping mill Susan, - I am about to wind a linen warp for towels the old fashioned way, - and a bit at a time. Glad you are feelin better - getting older does affect the joints somewhat!

Good Morning. Love watching your grandchild grow, sadly, it's too fast. I too have three now and it's zooming by. Your reel, I have had one for many, many years now and used to wind standing up but find it's much easier on my back this way - I put the reel on my loom bench and sit on one of those yoga balls with the yarn at my feet. It's much easier on my back and visually it's easier to see as it's almost eye level (not quite but closer than my cutting table). Make sure your reel is not in backdrop with light because then with all that spinning it's easy to blurr. Best, Carla

I still use my warping board most of the time but I have a horizontal mill for longer warps - after I used it for a while I was wishing I had a vertical one - hmm, maybe it can be retrofitted.........

So glad to see you're feeling so much better, Susan! Seems like you took the right path in healing...slow & steady wins the race.

I use my warping mill when I need more than 8-9 yards, and find it a joy. If I take off the crosses when I'm done it folds almost flat, except for its feet/base. I can wind bouts of 180 +/- ends of 8/2 cotton 15 yards long without a problem.