Its sure been a long time for both you and for me when it comes to a new weaving post!     I'm having to reach way back to last September to start this story.   It was a tense time getting things together in the studio, plus getting the house and me ready for the surgery to come.

This project started with watching a video by Margaret Coe on how to use the colour gradation feature on the Fiberworks program.  It looked simple enough so I thought I would try my hand at it.   After a few fumbled attempts, I pulled together a three colour gradation of just over two hundred ends and then  found a nifty eight shaft twill draft at Handweaving. net wound a warp long enough for two scarves and some samples.

{ I love that web site.... I could spend *hours* cruising through their random drafts feature..... and I do!    If you are a fan of authentic tartans, then go and take a look! There have been many entered into their web site and give the actual colour setts. } 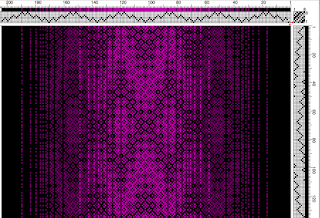 I wound the warp and got it ready for beaming once the guest towel warp came off the loom.    If I recall, the warp came off and this warp was on the loom all within an hour or two!   Hubby Bruce helped me so it went smoothly and quick.   I'm not a fan of naked looms.... they should be kept dressed at all times  :) 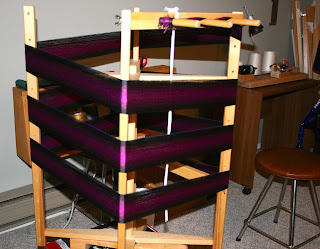 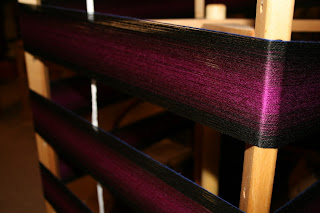 I wove the first repeat, which measures six to seven inches to see what it looked like and admire the colours.... and then left it to sit until I was able to weave again.  Something to look forward to. 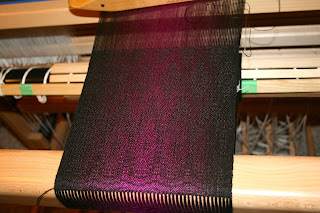 I noticed it was hard to photograph it well between the darkness of the colours, the flash, and the shine off the tencel. I had to try different angles and settings. I'm sure someone with camera 'know- how' could do it but I only play with the auto settings.   So you might notice some changes in the lighting and appearance.  Its just me trying to get a better picture!  So my secret is out... I just take lots of pictures and see what turns out.... and then play with them in the computer.   Hey!  its worked okay till now. 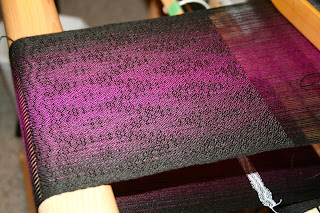 The weaving part took some time. I tried my first few inches at about six to seven weeks post op. (So about mid November) and quickly discovered .... it hurt!  My first few sessions produced a few inches and only a few minutes each time.  The knee would swell up and so need a couple of days off and then I tried again.... with the same results.   But it felt good to be resuming a normal activity again.

Then we received all the photographs from my Dad's estate, which I sorted, and then Christmas came along and so there was a three week break away from the loom.  This turned out to be a good thing in hind sight as it gave me more time to heal.  I felt much stronger when I got back and not as much swelling and pain.   I planned to be on the bench for New Year's Day and I was !   It sets the 'weaving tone' for the new year and I wanted  to start 2016 off right.

To be truthful, I have finished these two scarves plus two others since then but the second batch are for another post! 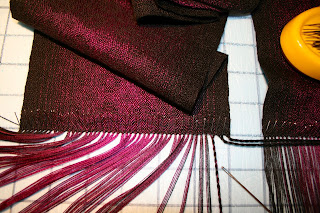 It sure felt good to pull them off the loom. Bruce was there for the 'unveiling' and he also helped me load the next warp right away. I was on a roll and not about to stop!   The next day I serged my samples up, and measured my fringe allowance and evened the lengths up.  I pinned them out on my board and got busy twisting the fringes.  I had a good look through my bead stash but other than small basic black seed beads, I have nothing in the magenta colour line at all. They were just going to have to go naked!

Its okay as the ombre effect sort of takes centre stage anyhow.... who would even notice they were there? 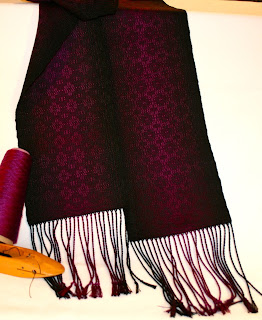 These pictures show the scarf where it was woven 'as threaded'.  Its a neat little design that reminds me of flowers somehow.  Fully reversible and so it has a slightly lighter and darker side. I arranged the scarf to show both sides in the pictures.   I had waited for some sunshine to take the photographs but we have had endless rain.... or I was away from home when the sun did break out! I finally gave up and dragged every lamp we own into the studio and set up a white sheet across the Megado and gave it my best shot. (pun intended) 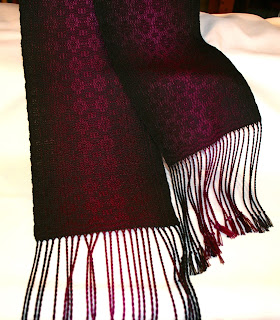 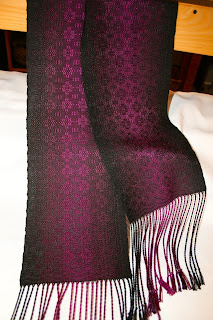 The other scarf was woven 'network' style as shown in the draft above.  It has a whole different feel or mood to it.  Its also fully reversible.   I think this is my favourite of the two.   It would look stunning against a black wool dress coat, or suit.  Well, they both would! 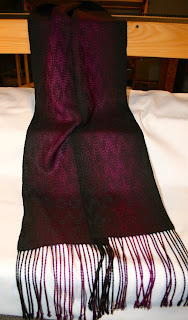 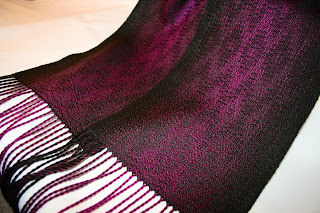 So to review: six and a half yards of  8/2 tencel in colours black, eggplant and red-purple; sett 24 epi.  Both scarves were woven to approximately seventy four inches and end up being seventy two inches in length when all done and a final seven and a half inches wide. The fringe measures 6 inches. 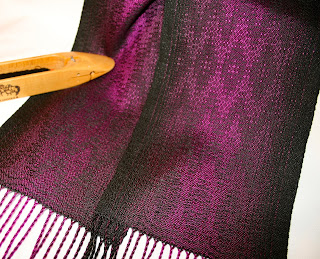 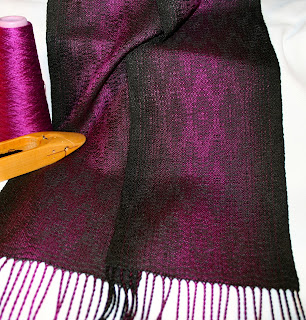 The next warp that went on is a repeat of a few things.... the drafts used, the ombre effect but this time all different colours and a whole different look and feel.   I used four colours this time as well.
I had to plan to use the same tie up again as I wasn't sure of how things would go changing it, even propped up on crates. Parts of me just don't bend the same way anymore!     The treadling does count as exercise though for the leg and knee so its been good that way!

Glad to see you are back to weaving. And what beautiful scarves to get you going again!

can you send a link for Margaret's video on using the color gradation in Fiber works? My searches do not come up with it and I would be most interested. Thank you. Better

There is a group at Facebook called Fiberworks. So you must be a Facebook member first... then join the group. Margaret is the moderator and looks at your profile to see if you are an obvious weaver. Its a closed group due to the level of spam that happens and I quite agree with this.

Just in case you are a FB user, here is a direct link to the group: https://www.facebook.com/groups/Fiberworks/

Then look at their files and videos. Great group, very friendly!

Absolutely stunning. (I've sent my request off to fiberworks group.)

So beautiful, Susan! And I'm so happy you're well enough to weave again.

Incredibly gorgeous scarf, Susan! Glad you're up to weaving your beautiful pieces again.

Susan, you have outdone yourself yet again. The color work in this scarf is outstanding! Lovely work as always.

I completely agree--these scarves are STUNNERS! You never fail to achieve this, Susan.