There is just so much going on this time of year!  The sun is out, vacationers are in town, special events are on and every day is busy.     That's a nice way of saying there not been much weaving of late.  To be fair, it is our first summer here and its so nice to enjoy it. Last year was all about healing from surgery, then all about selling, packing and moving.... which was all for the best, but it was a lot of stress and work.

I do have a finished project for you though.    Its the third project in a series using the same threading and tie up as the previous posts of the two shawls and table cloth, but this time with some brighter colours..... and some amazing iridescence !  We have a pond behind our yard and so we have countless damsel and dragon flies everywhere. These scarves remind me of their wings. 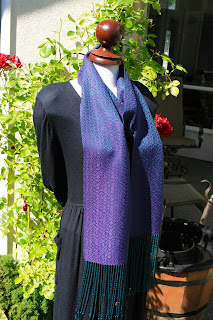 So this is a twelve shaft point twill draft,   8/2 tencel sett at 24 epi and I used colours dark teal and amethyst together.  I tried a treadling variation which made for a nice change, but it also was hard to keep straight in my mind for some reason. I had to be very careful to keep it on track and watch for mistakes as I went along. 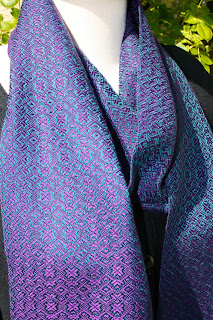 Where the fabric bends, the light changes and so does the colour. Its very silky and cool to the touch. I really enjoy working with tencel as it always satisfies the weavers inner need for drape, sheen and a darn good burst of colour.  I set Madge up by the climbing rose outside the studio and snapped some pictures.  They are nice but the sun was almost too harsh so I took her back indoors for some more  photographs in different lighting. 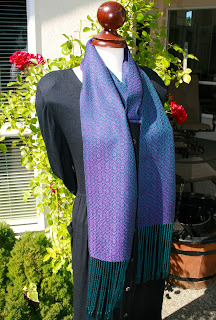 It almost looks like a whole new scarf with different colours!   I know its the same scarf as above as I only wove one with the treadling variation. 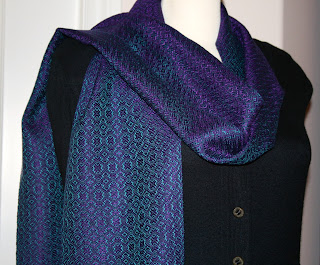 It became more 'moody' and subdued, if you can call something like this subdued.... 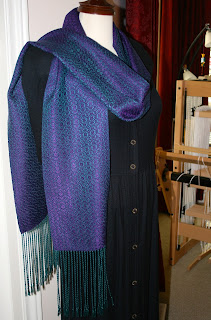 The second scarf was treadled in the same fashion as the shawls, so producing that neat little diamond and what I call a flower shape.   This time I paired the teal with red purple (magenta) and I expected some dazzling results..... and it didn't disappoint ! 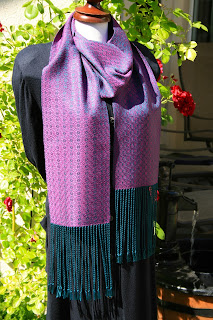 The picture above and below are taken outdoors in the sunshine. You can see the iridescent effect below where the fabric curves. 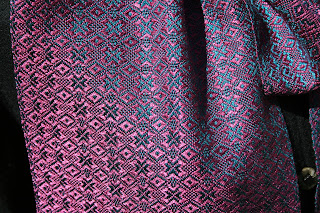 The two pictures below were taken indoors in the studio with no flash ( as it bleaches the colour out). This colour scheme is by far the flashier of the two scarves woven. Which one do you prefer? 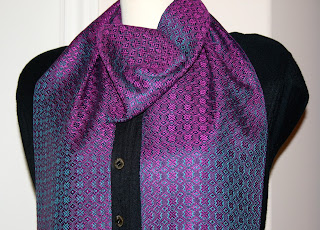 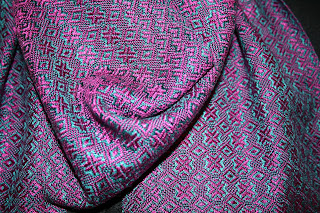 Its time to switch things up around here.  I'm changing from weaving with  tencel to silks, using a new 'old' 12 shaft draft and a much finer focus at 36 epi.    I have been commissioned to weave two all silk scarves for a client and so I will weave a total of three so I have one for my etsy shop. 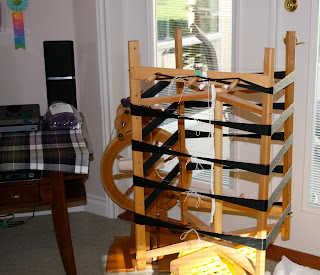 Here's one of the warp bouts on the mill and ready to come off.   This project already has an interesting story and I haven't even finished threading it yet.   The client wanted a blue based red as weft for one of the scarves and so I ordered a nice deep red on line .....and it arrived as an orange based red.  I should have known better about ordering reds based on a computer screen image.  So into the stash they went. The client found the colour she wanted and since the 'customer is always right'  😊  I ordered exactly what she wanted, only to find I had inadvertently ordered 60/2 silk instead of 30/2.

My bad.  Into the stash they went too.

I re-ordered the dyed silk and they rushed to get it done ahead of both of their two dyers leaving for a months vacation. *phew*   It arrived and is just lovely and the right size.

My warp yarn is 30/2 black silk I bought from another weaver in California.   The difficulty with it started once I had ten to twenty warp ends wound and I could see the fine two ply yarn was scattered through out with little neps and noils. There was no sign of these 'fuzzies' on the surface of the cone of silk.  They picked off okay and in time maybe even wash out, but I could see how it would make the fine weaving ahead look like it was pilling.  This is not good at all as my client wants smooth and elegant.     I could go with a 20/ 2  charcoal black silk I have on hand in the stash but its not that inky jet black we wanted for this project.

The weaver I bought this silk from was happy to take it back and give me an adjusted refund.  Then I lucked out and found a Canadian source for 30/2 black silk in Vancouver.... that's practically in my back yard.

So I'm half way threading it and hoping all my 'woes' are done and I'll have smooth shuttling ahead. 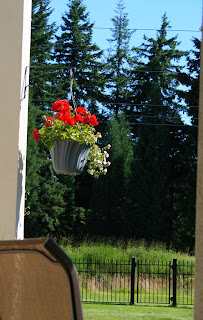 Ay yi yi! Hopefully the rest of this scarf will go smoothly and not continue to be difficult.