There has been some weaving going on here. Its just a bit less and a lot slower than normal.  It summer after all and so we have been out more and also enjoying the garden and patio.

We also had some days away visiting the family and grandchildren.  That was a lot of fun and we had many rounds of playing Go Fish, and I discovered that my grand daughter Madison (age 4) cheats at it, and just flashes a smile when caught.   Ethan (age 7) was awarded a new strip for his belt at his Brazilian Jujitsu class and was so proud that his Grandad was there to see him get it.   They are growing up so fast!

I decided to revisit an eight shaft draft which features twill progression diamonds. It was a fun weave and I enjoyed it. I thought why not try it as a shawl and be more neutral with colours.   So I wound a seven yard warp for two shawls using undyed 8/2 tencel, sett the usual 24 epi.

My weft choice was a new fibre I haven't tried before. A 50/50 blend of modal and green tea.  The colour is a natural soft pale gold tone.  I thought against the white it would gently pick out the pattern.  Sort of a play of light on the cloth to bring out the diamonds. 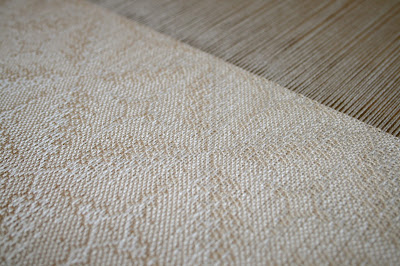 Trying to get the light just right to see the pattern! 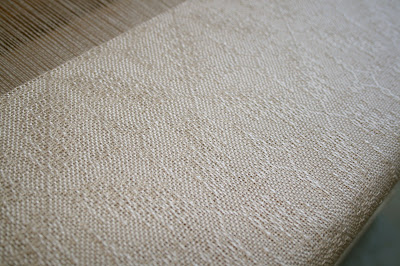 Modal is made from processed beech wood. Exclusively beech wood.  (Tencel is made from a mix of tree waste). How this changes things, I'm not really sure.    Green tea is the by products of making green tea for consumption and this is all the little twigs and branches that are normally disposed of.

Its all cellulose when it comes right down to it. Its ground and processed and turned into a slurry and then extruded through fine holes to make the fibre, then its plied and can be dyed.... or not.    They use the cotton size index to help simplify things and so that's why you have : 8/2, 10/2, 20/2 and 30/2 in tencel.   Then 8/2 is the most popular size produced and sold, all due to the many American weavers who set the  bar for what is more popular and so they produce the yarn  which will yield the most sales.  I love the colour variety of 8/2 but if I could choose what I prefer, I would use 10/2.   A twill sett is 28 epi which is only four extra warp ends per inch but 24 epi was as far as the general average of US weavers were willing to go.   It was a sad day when all the dyed 10/2 disappeared from the market....

Weaving with the modal green tea yarn wasn't as straight forward as I hoped for. The yarn is plied and seems to be a bit over energized and so it wanted to twist up on itself.  So I found I had to be careful to only draw out enough weft off the EDS's pirn to fill the pick and not a lot extra.   Then I had to be vigilant to catch any twisted bits that made it into the cloth regardless of my new shuttle throwing technique.

I don't think this issue is with every cone sold but perhaps with this particular batch made. I have labeled it 'weft only' as I can't imagine trying to cope with an over energized warp bouts and trying to beam it.  It has a lovely colour and good strength, plus soft. So lots to recommend it really. Its not a high demand yarn as yet so it tends to be spendy to purchase. 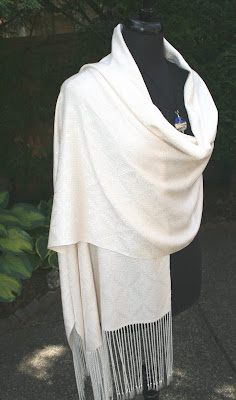 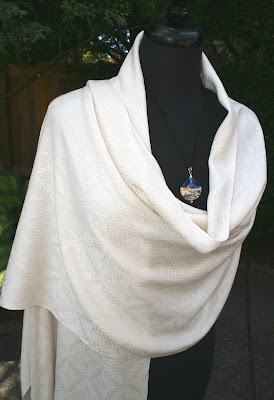 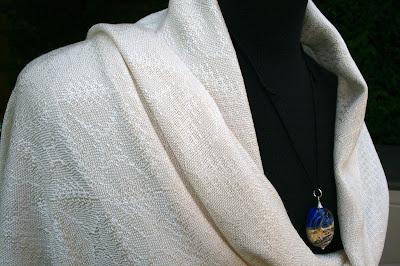 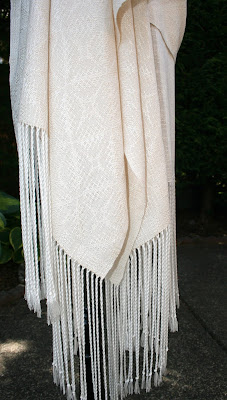 I found slowly twisting all this fringe very soothing as I waited for news on my friend Wayne last week. 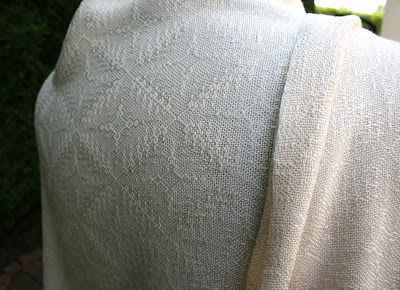 So the neutral gold beige of the modal seems to have completely taken over the white tencel. Heck even the white fringe looks cream now.   Its a colour I'm calling butter cream.

I started to have some slight tension issues so this shawl was cut off early and I re-lashed on and started weaving shawl number two. This time I'm using silver tencel. So staying with a neutral tone but perhaps better pattern detection?  So that will be my next weaving post in due course..... 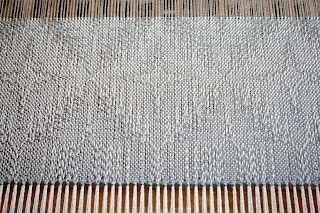 Meanwhile, a house tidy up is underway as I have all the ladies from the local guild coming here next Wednesday for a spinning afternoon. I have some baking to do!

Absolutely gorgeous shawl! I love the tone-on-tone aspect of this pattern/yarn selection. I'm still a newbie with my multi-shaft loom, but as a spinner, I'm always interested in new fibres.

I was so very sorry to read about Wayne on Ravelry. My condolences to you, as I know that you and he were great friends.

What a lovely shawl! I had not heard of green tea being used in weaving yarns. Thank you for supplying a link, and also for the heads up on it being twisty. I will keep that in mind.
I look forward to seeing your second shawl.

That is so beautiful! The way it drapes the colors are just perfect. I surf the web in hopes of finding more inspirations like this. I am new to weaving and I am obsessed. Thank you for all the details you provided. I am loving going though your blog.