Weaving for the GCW Exchange Project

Well, my warp is on and I'm weaving but there's no way this will be done before we leave! 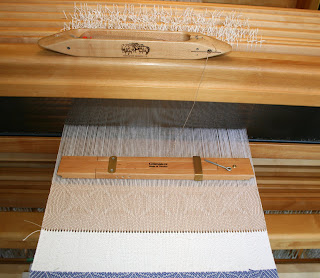 Fortunately there will be time when we get back to pick up where I left off and finish by the deadline. This first picture is a little hard to see my pattern, but it's meant to show how very little draw in I'm experiencing. I tried the 'Jane Stafford' method of tensioning the warp and even though this involves more loom waste, you get a beautifully tensioned warp. I'm still using the temple and EDS and I'm enjoying the process more this time than I have done in along time. Weaving is supposed to be fun after all. { Louet is now offering a 2 disc CD set showing Jane warping a Spring loom and the second disc shows all their looms. It's worth it for the warping demo alone!}

The exchange this year is finger tip guest towels and I'm down to make and send in six. So on went an eight yard warp for twelve. They should be approximately 12" by 20" when complete. I'm starting on towel number three today. The warp is 2/16's cotton in white, sett at 36 epi and threaded for a fancy eight shaft twill. It has some advancing and retreating twill runs to keep me on my toes treadling. I haven't figured out how to import WIF files to here so here's the next best thing: 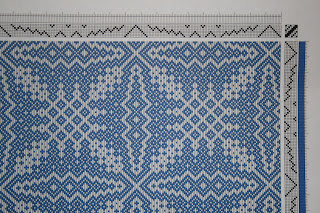 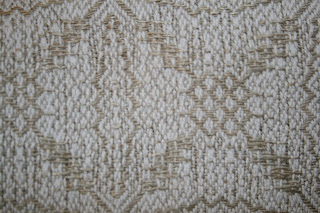 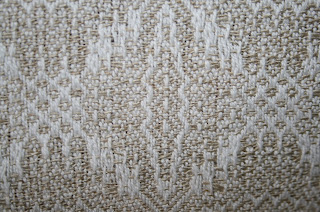 It's a 'tromp as writ' and one I have used before ( love my record & sample books!) The images under the draft is a sample from my project in 2005 and how it turned out, showing front and reverse. I wanted something more elegant this time and finer threads. I imagined the towel on a bathroom vanity as some one's *special* guest towel and it should reflect that. 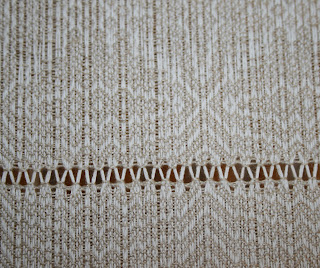 The first towel (above) I used 2/40 linen as weft and the denting (3 per dent in a 12 dent reed) makes it look streaky. It will wash out eventually but it had me double and triple checking for threading errors due to the way it bunches certain groups of threads together. The second towel, I used a cream 2/10 mercerised cotton as weft. There is that neat interplay of pattern against the light and it's lovely, but it did not photograph well at all, no matter what I tried. Blogger tends to somehow darken pictures and so I had to pass on posting one of those shots.

This picture below is the third towel that I started this morning and I really like the effect of white hem and coloured main part of the towel: 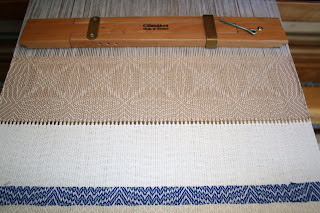 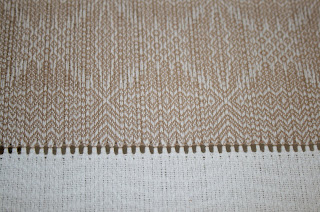 The weft is 2/16's in a medium beige and I think I will do a few of these in this colour. I have to choose weft yarns that are absorbent and be smooth yarns to show the pattern. I want fairly neutral colours as well. It's funny that no matter how large your stash is, at a time like this, you find it lacking!

The weaving exchange is for the Guild of Canadian Weavers and this is the third year I have participated. The first was tea towels using authentic Scottish registered tartans, and last year was woven inserts and greeting cards. The variety is amazing! Whether its the yarns, pattern or colours used; it's all quite unique and a lot of fun to get in the mail in November.

The last two exchanges were photographed and these photos were reproduced into a nice colour addition to the Guild's newsletter for all members to see. They get the drafts as well. So, knowing these will be ultimately shared, I felt a little 'performance pressure' :)

We are leaving this coming Saturday for a trip off to see family and friends and won't be back till the 19th or 20th. Give me some time to unload the car, and start the laundry and I'll post soon after. My hubby bought himself a new toy to bring along and it looks like things will get interesting around here! No more swanning about in a nightie... must be in full hair and makeup at all times! Ya right.... I just need to learn where the delete button is ( or learn to operate it and get even!) 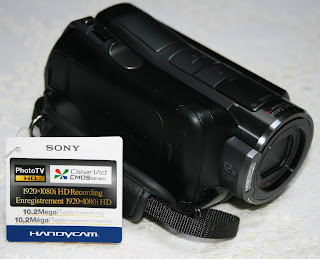 .. and being 'hi-def', it shows every zit, wrinkle and chin hairs. I better hit the spa while away!

See you in a couple of weeks time.... 'Happy Weaving!"