Its difficult to photograph Midnight in broad daylight.   I'll just have to add that the colours in these scarves are deeper and richer than they show here.  In reality they are very jewel like and the pictures don't do them true justice. 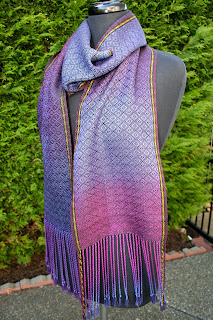 The loom was threaded for a 12 shaft point twill and when treadled as a run from treadle one to twelve  and back again, you get this nifty diamond pattern that reminds me somewhat of bird's eye twill (which everyone loves). This just has more complexity to it. 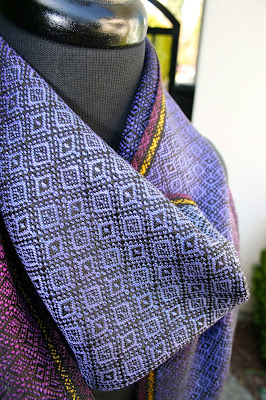 The drape at 24 epi is just lovely and tencel has such a lovely sheen to it.   The centre portion is the painted warp from Iridescent Fibers (208 ends and 7.5 yards long). They make bright handprinted warps for the weavers at Loominaria. 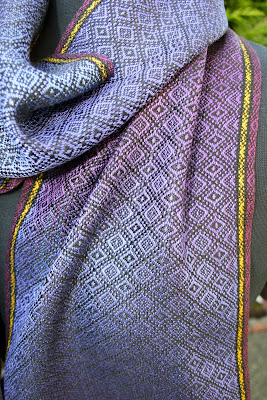 Now as I said, the colours are richer than they appear here in the sunlight..... and I took one indoors today and will post it next. Its of the same portion of scarf on Judy: 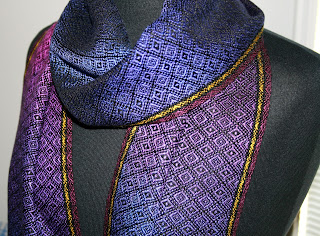 That's a better representation of the depth of colours .... and as you can see the colour shifts are beautifully done.  The edge sections were my choice from the stash to frame the warp. 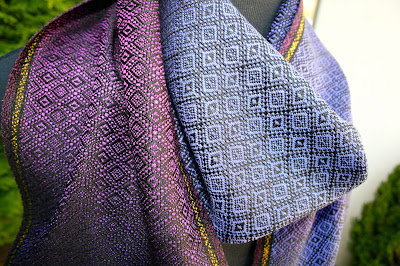 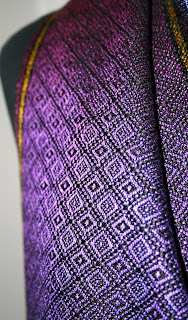 For the second scarf I tried auditioning several different colours but nothing really called to me.  The eggplant was dark enough to pick out the pattern  but somehow it was all muted down. Its different and lovely all by itself. 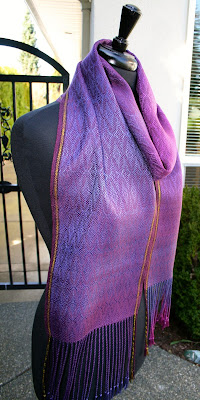 It had a unifying effect. I also changed the treadling to this twill progression that resembles feathers to me.  I had to be more attentive to where I was so no zoning out ! (also no phone calls, and no conversations etc).  Both scarves measure nine inches by seventy four inches.   When hand washed only a slight trace of dye came out so dyer Carrie really rinses well! 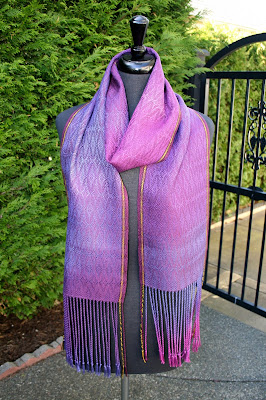 I also really enjoyed weaving them. It was fun to watch the colours shift from one to another.   I put another painted warp on after these and have checked to see which others I plan to buy next. Midnight is one for sure! 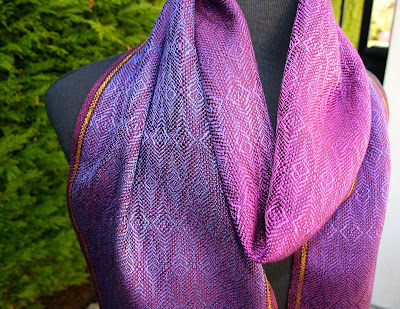 Here are some spring time shots of our back yard as of yesterday: 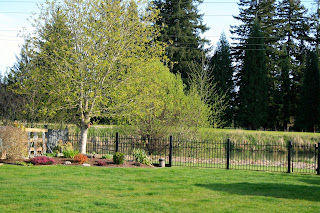 There was barely any buds on the chestnut tree last weekend and it has exploded in our current week of sunshine. There have been several visitors to the nest box which was dutifully cleaned and ready for new occupants.  By the time all the leaves have come in, the nest box is barely visible. The flowers on this chestnut are bright pink. 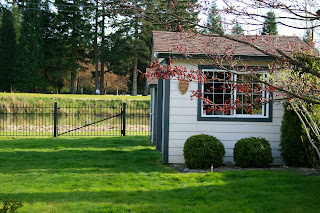 The two garden sheds fared better this past winter with new shingles! You can see the golf course beyond the pond. We are mid way on a 541 yard fairway.  They are still beavering away at the new course design and just seeded the greens with a special bent grass seed and filled the bunkers with new clean sand.  They plan to open the new driving range in July and the course in August.  That will have been almost two years of no golfers and carts on the course. Its been like our private back yard extension, except for all the trucks, back hoes, tree planting, hydroseeding, irrigations lines being laid etc etc 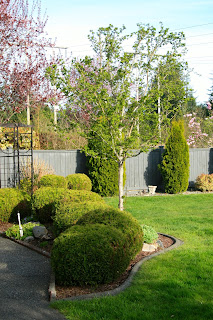 Here we have a hawthorn tree and beyond is an ornamental cherry. 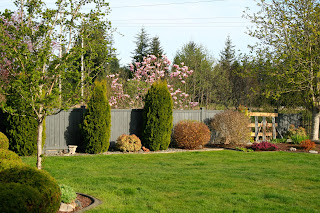 The neighbours magnolia is lovely and reminds me of our old one at the last house.   You will have noticed the interesting fence panel.... or lack there of!  We had some wicked wind storms and this panel blew down and spread parts all over the back lawn.   Bruce had to rig a way of supporting the fence and keeping Calli on this side.  She loves it... she sticks her big head through and watches them gardening.    Calli just turned 8 years old.   I bet some of you can recall when we first got her.....

Please bear in mind that Bruce has his surgery May 3rd so it will be a busy time for a while here. I will drop you a post to let you know how he's doing though....

Anemones Belong Under the Sea

Sorry if I alarmed some of you with a partial post.... I was away from home and tried writing a post "on the fly" and discovered I had hit publish when I meant draft.... and a quick scurry to fix it, well didn't!

I haven't stopped weaving or blogging.  Trust me, if that day ever comes, I will be honest and tell you that I'm stopping or taking a break.

You have to know that there is a private side to my life that you don't hear about but I have been overwhelmed recently with emotions and feelings that are hard to put into words and share.... especially share with the world.   After talking with my husband Bruce, he's given the all's clear to share.  We hope by telling the story of his diagnosis and coming treatment to help demystify the process.

When last I wrote,  Hub had a kidney stone 'missing' and assumed that it had passed into the bladder.  The Urologist wanted to scope and double check where it was for sure.   Sometimes they can get jammed up somewhere, cause no pain and the other kidney takes over all duties and that's not a good situation to be in.

So three days after I last posted, Hub had the scope thing done.  The stone was not blocking anything, or even in the bladder. Where it went to, no one knows !  You'd think Hub would notice a 6 mm stone 'leaving' wouldn't you?

The first sign of trouble was the funny sea anemone that appeared on the monitor screen.  You are not supposed to have those in a bladder.  While Hub was trying to mentally work what it was out, a voice from beside him said "that my friend is a malignant tumour.... cancer".     We have been in some weird headspace ever since.   We did go over to visit friends directly after and had a cup of tea which helped immensely.  But the doctors  send you home with a "we'll be  in touch" and and nothing else, and then there's a big time period of nothingness.

While we waited for any information,  we talked things through and we have gone from full on pep rally mode to some deep dark places and back again. We have avoided googling things and instead saw our family doctor who gave us his best run through of the process.

Suddenly you become aware of the vagaries of Life....  a search for a missing  piece of crystal 'stone' turned up a silent visitor.  We are grateful that it was found early and so are optimistic.  Surgery is May 3rd  for cancer removal and lazering of stones ....and there will be many follow up medical appointments for some time to come.

So in the days and weeks while we have waited,  Bruce has a new estate model train collection to inventory and find buyers for which has kept him busy.   I have to say that having a warp on the loom was a life saver some days.  A twelve shaft point twill, a painted 8/2 tencel warp by Iridescent Fibers called Midnight and a simple treadling gave me a place to come to and just watch the colours change as the shuttle flew back and forth. 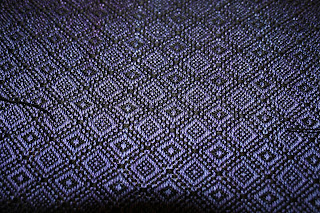 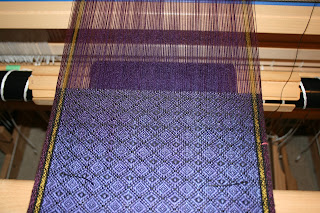 It slowly shifts from a blue violet to a grape and then it evolves into a magenta.... 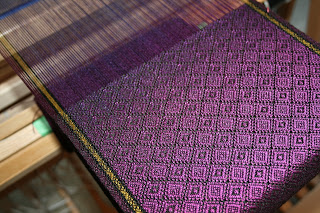 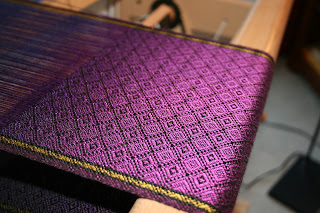 I added eggplant and old gold to the edges to frame it and used black as weft on this scarf.   The second scarf I used a twill progression that resembles feather (to my mind) and used eggplant weft. 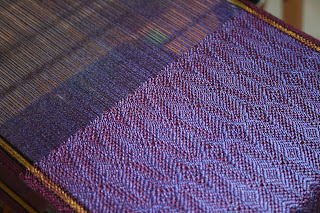 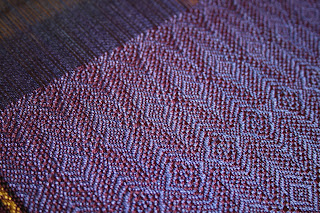 I had to pay closer attention to treadling this scarf!  The eggplant is nice but black makes the colours really pop.  I did audition navy blue as well and it was just blah.

So they are woven, fringes twisted and washed / pressed and first sunny opportunity they will be photographed and I'll post them here.    So not too long a wait....

I have a second painted warp on I call Dark Chocolate Cherries.... and its quite unlike my usual colour range.   You can see a version of it at Iridescent Fibers link under 3.5 yard warp : "Dark Chocolate" I'm trying to be more inclusive of other colours on the wheel.... and in between. 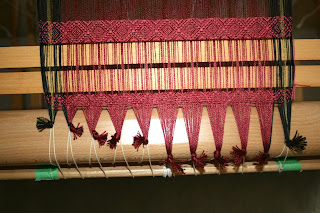 Well, we're home again now and I have a pile of laundry to wade through today and since Hub's at a train show today, I can weave while I wait.

So please don't worry.... we are optimistic about the coming operation and recovery.   We'll be staying close to home this summer   😎