Some time ago, and most likely last spring, I was browsing on Etsy and I saw this painted warp by Carr Park Artisans and fell in love. I liked the softness of the colours, the gentle merging of greens, then into cream, then peach and pinks.

Some warps out there on the internet are sharp with jarring colours.  Now I like bright jewel tone colours but sometimes they can lack finesse.    Some add in some streaky black and it ends up like looking like something from a Killer Zombie movie.

But this appealed to a softer side of me and next thing I knew, it was paid for and being shipped!   200 ends of  8/2 tencel.... and 5 yards long.   It was going to mean two shorter scarves and no samples, plus shorter fringes. 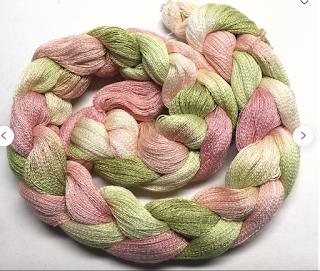 It reminded me of these soft peonies and greenery gifted to me earlier this year.   The painted warp's name is Cabbage Rose and it fits well. 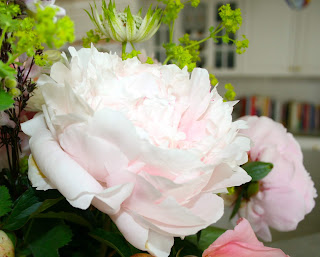 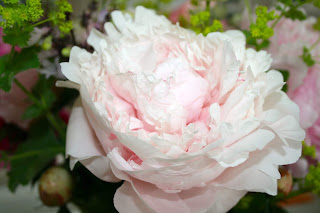 So I went looking for a nice draft to use and one that would have the same tie up as my last project so to save some time and energy.    I found the Maltese Cross, or # 168 in Carol Strickler's  Weavers Book of 8 Shaft Patterns and I played with the draft until I got this: 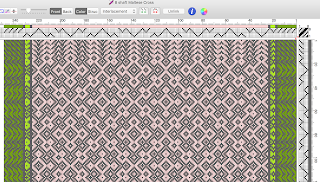 Its difficult to convey a painted warp so I just used a generic soft pink for the 200 ends in the middle and added olive green, shale grey and lemon grass 8/2 solid dyed tencel for the edges.   I made some changes to the border threading. You can also see my starting border, and reversing that border treadling would be used at the end of the scarf.

It seems some newer weavers these days are not framing their work or have not been taught to do this and they simply weave the draft 'as-is' and while that's okay... it looks like something is missing to me.    Playing with a weaving program (any of them!) can go a long way to trying things like this out.   Watch your float lengths!  Be sure to check the back view as well.

I also used a soft grey colour as the weft above as I wanted to see details clearly. I knew my first colour choice as weft would be olive and that would obscure my view of the edges.

My second scarf? I went with a rich dark purple called amethyst as it worked well with all the colours. 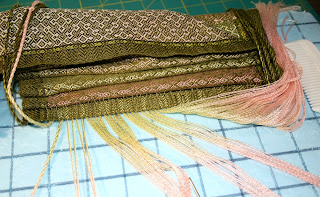 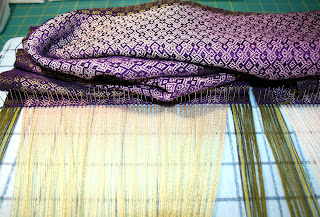 The weaving went well and soon I was twisting the fringes, or 'twizzling' as my dear friend Wayne would say.  Washed, pressed and trimmed up all went as per usual but then they sat and waited out one of the first bad weather fronts of the fall to roll through. Then it seemed every sunny day we got, we had business away from home and the rain settled back in again. So finally I just turned on every light in the studio and got the camera out to see what I could get. 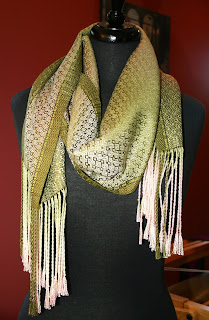 This scarf is shorter at 58 inches in length and I call it Lilypad.  The colour shifts in behind the pattern are soft and subtle and add to the iridescent effect. 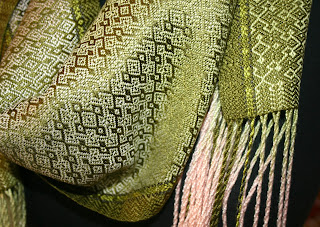 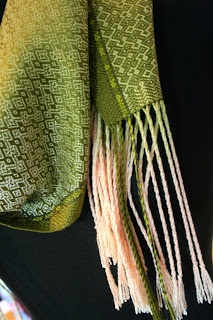 Then this moody little number is called Twilight . Its longer at 69 inches.  I thought of summer sunsets on the back pond behind our house, complete with frogs, fish and dragonflies. 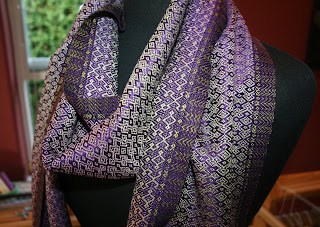 The soft green hues of 'cabbage' definitely come through the amethyst ! 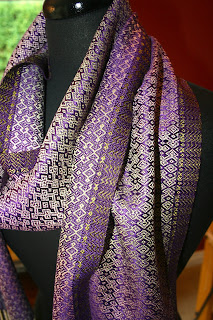 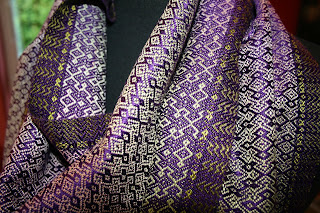 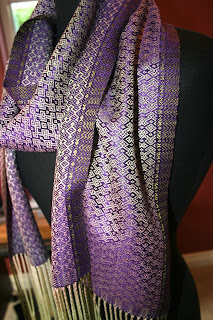 I have ordered another cabbage rose warp, much wider and longer this time and I think Christine will be doing several of them in short order due to demand.  Send her a note as to your desired length. I found 5 yards a tad bit short for two scarves, and it was too long and skinny for a shawl.


Every pond needs a faerie princess right?  Here's my 4 year old grand daughter Madison who is now kicking butt at her beginner Brazilian jujitsu classes (along side her older brother Ethan).    She got her very first stripe on her belt. 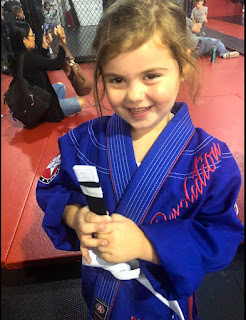 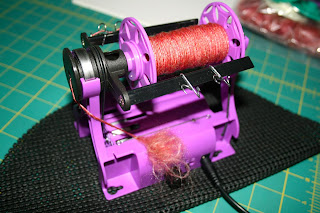 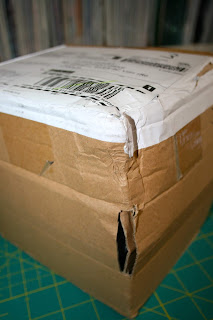 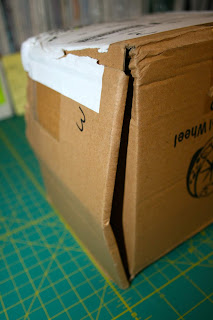 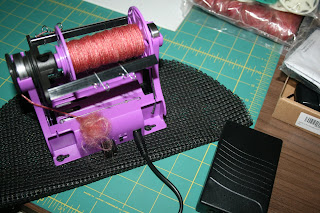 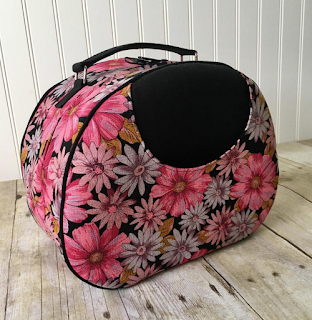 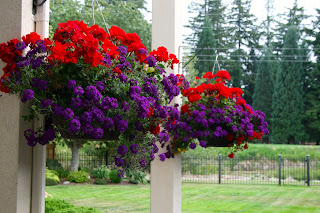 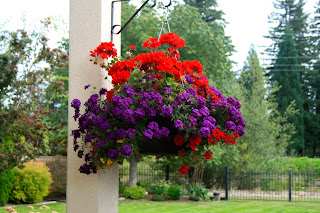 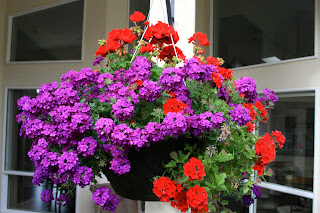