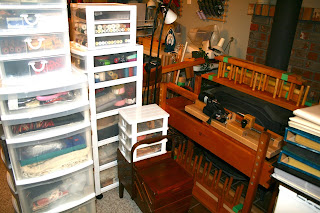 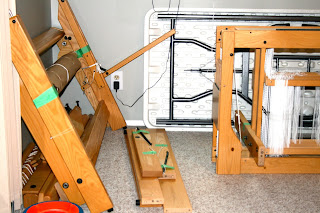 The studio is in bits and bundles. The family china is wrapped, boxed and gone already.    Nothing to but wait for the packers and movers this coming week.

The calm before the storm... 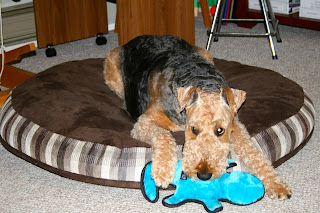 I think Calli suspects something is going on. She keeps pretty close to either us or her bed. The suitcases purposefully haven't come out of storage  as yet as when they do, that means 'kennel-visit' to her'.  Except this time she's coming with us.

It will be my one year anniversary of my new knee on the 28th. What a difference a year makes!
See you on the other side of this adventure in moving...

Neither Here or There

It feels weird at home right now and I suspect it will for a time to come.  (No matter which house we're in.)  We have started visiting local businesses we frequent and friends in this area and saying good bye.  We went and saw our family Doctor and and caught up on things there too.

In between this we're at home purging closets and cupboards. I'm amazed at what I'm finding as I'm not a fan of keeping stuff and try to  have a relatively clutter free home.  Its like the stuff breeds when the doors are closed.

We sold off our guest room furniture and so now have one (almost) empty room.   We decided to sell our Colonial style dining room set. We bought it second hand in the late 1990's and it was always meant to be a temporary arrangement until we got our ducks in a row and bought something else.  Well, you know how Life is..... the ducks never quite behaved.

Bruce was checking the "Used Nanaimo" web site on line and found a rather unique dining room table and six chairs , and also two hutches / china cabinets for sale.   Some research told us it was a reproduction of a French 1930's Art Deco  model.  (Here's a link to the real deal)  We drove up island and had a look at it. 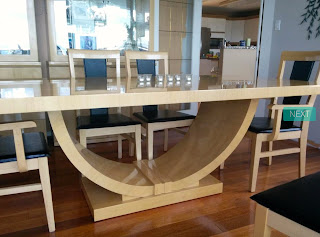 The table is just over seven feet long and so it will make a lovely set for the dining room.  Gently used and not at new retail pricing!   It will come to our new home in mid October.

We were so excited about this new addition that we stopped at Home Sense on our way home and bought a new rug for underneath.   Now I had some nice comments about the home but a couple did mention the lack of colour.... or vanilla decor.  We may in time add accent colours to some walls but for now we're leaving things as they are.  We'd like get a feel for the place first and add colour by way of  accessories.   So we started with this: 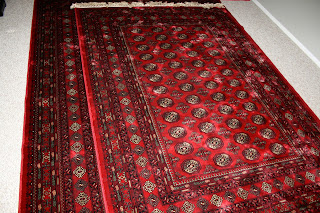 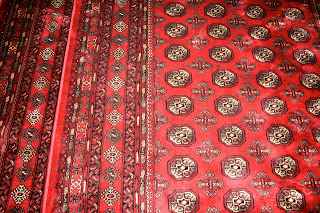 We got one rug that is 5 x 7 and a larger one for under the new table of 9 x 12.    Its made in Belgium and the fibre is lyocell.... or tencel!  Europeans use tencel for bed linens and many other household effects.   I hope to use the smaller one under the dinette.    So we now have an accent colour chosen to liven things up!

I wove off the last scarf on the Louet Spring and they are rolled up and packed. I'll finish them once we are more settled.   I made a big push in the studio to prep as much as I can for the movers.   Bundling up warping sticks and breaking down warping mill and warping boards.   I've taken the loose beams off the Spring and tied the beams up snug.  The studio is an organized mess right now as I work my way from spot to spot around the room.   I think the Megado loom will need a larger take down. 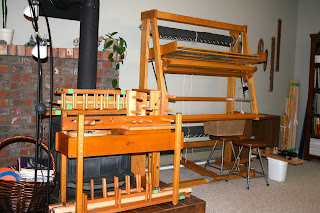 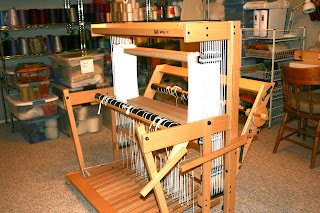 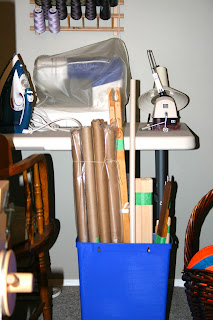 Its my habit to take a photograph of my start of each new project and I do this for a couple of reasons:
I have a couple of pictures to share something fibre related with you until we're moved and settled. So remember this?  An eight shaft fancy twill. 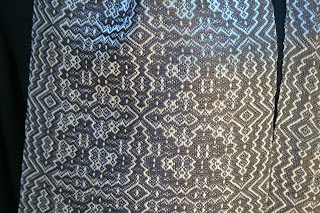 I put a new  olive green 8/2 tencel warp on and threaded it just the same as the scarf above. But I wanted to try something different as I have two scarves in this pattern already.  So I worked on some treadling variations and  the first was worked in a snowflake style or twill progression. 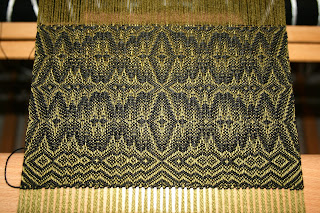 On the second scarf, there's a change in weft colour and a change in treadling again.  Just a simple run back and forth across the treadles. There's a slight change at either end of the scarf which will be hi lighted when finally finished. Stay tuned for that. 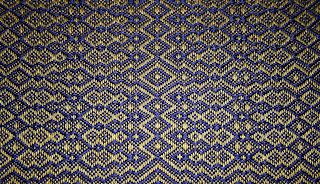 So as you can see, you can get a nice variety from one threading.  I demonstrated this once before with this post.

So this is most likely my last post before the move but trust that I will have my camera handy and be snapping some shots to share later on.    See you on the other side!