It was either a television show featuring far off golden beaches and turquoise waters, or a travel ad luring you to the Caribbean for a 'sun-cation', but the nugget of inspiration for this project was conceived on a cold, dark night in early January.   The driving wind and rain, or the cold sleet and snow, combined with the short days getting dark so early had me thinking of warmer, brighter times to come!

The image I saw on the telly was much like this one below. This is a beach on the Coromandel Peninsula on the north island of New Zealand.  It best demonstrates my design concept with its curving arrays of waves on a golden shore.   My mind mentally ran through my stash and I realized I had the colours on hand! 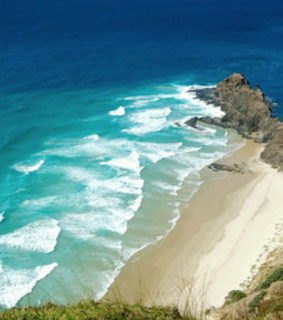 Now the search for the right draft started. Over a few days I spent much time cruising through drafts on Pinterest and Handweaving.net and scrolled through scores of drafts. I went through all five of my sample binders, and various books.  I went back to Handweaving.net and eventually found this draft there.  Now, I must 'fess up and say that I either didn't record the draft number or lost it.  I don't have it , so sorry about that.... but you do have the three screens of the draft below.  This is what I call an extended twill progression.  The twill progresses along but there are many repeats at any given point, in this case four and then it transitions to the next, creeping up or down the run. There's 349 steps to one repeat, which in the case of my 8/2 tencel measured 14 inches on the loom.  Five repeats  equals 70 inches.  Scarf done!  Okay, so the in-between part is mind boggling but works okay  with no interruptions (of any kind) and a well caffeinated mind.  Its a good work out for the head, arms and legs.

I had used my Fiberworks program (for Mac) and played with the gradation feature. I tightened up some of the gradation but the draft is as it was as I found it at the website.   I was able to print off the threading by itself and then use little mini post it notes to isolate the sequence and so work my way across four colours and reverse again on the warping mill.  With the post it notes left in place, it meant I always knew where I was in the sequence and so could leave it for a break and a stretch. 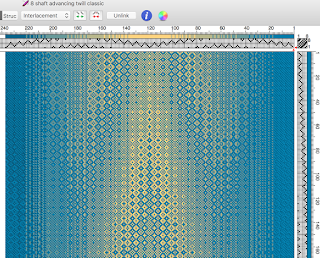 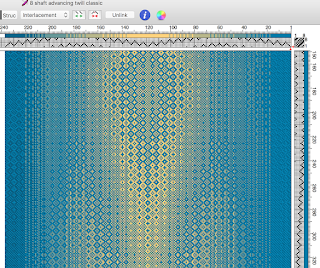 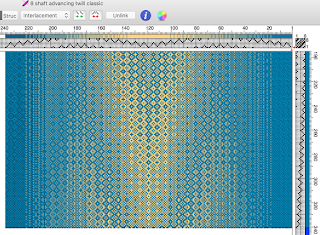 I used 8/2 tencel from Web's  in dark teal, greyed teal, straw and finally 'tussah' coloured tencel from Textura Trading. It has been in my stash for a few years now and was perfect for the centre colour. It wasn't until I was starting to wind the straw colour and needing to add the lighter tussah that I found the tussah was actually 10/2 and not 8/2 like the others. I had put it on the wrong shelf in the storage closet!  I thought about it for a few minutes and decided to go ahead and use it anyway and keep my sett the same at 24 epi. *fingers crossed*  😳

I could see right away this was going to be special... 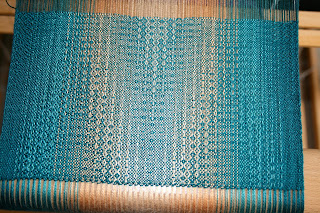 The colours worked so well together and the shift from one to another was  great. 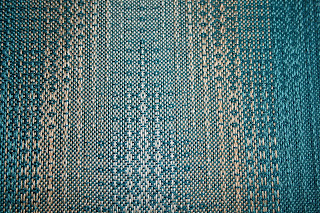 As luck would have it my  scrap  filler yarn to use at the start was a medium purple and it suited the warp so well. I  decided to try amethyst as weft for the second scarf and I liked it a lot.  Think "twilight time at the beach". 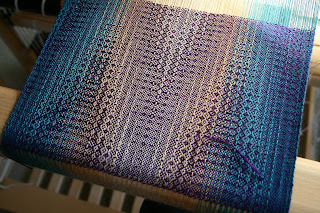 It also picks out the pattern more clearly than the dark teal and so has a whole different feel. 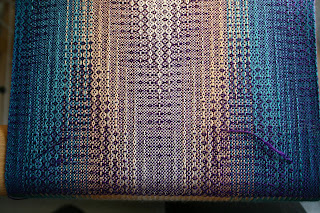 After several days of rain and cloudy skies, the sun came out this past weekend and I got busy with the camera.  This one shows the 'wave' effect I was going for nicely.... 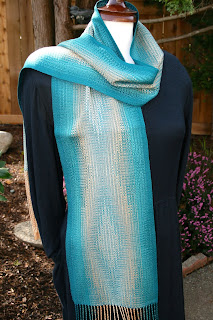 The colours in this photo more closely resemble the real colours used..... (pardon the fold lines! I did get out there quickly to snap the pictures). It clouded over and started raining again shortly after I finished. 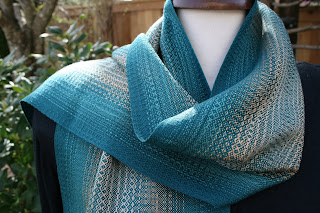 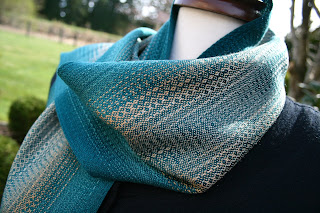 This one below shows a full repeat of the pattern. The scarf was woven to 70 inches on the loom and was 66 inches when all wet finished and pressed.  Four inches lost seemed a lot to me....
The final width is 9 inches. 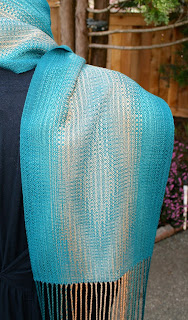 Then there's what I call the Twilight version, with amethyst weft: 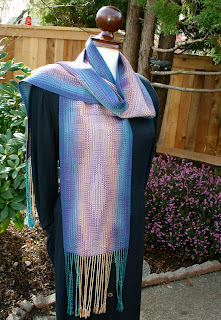 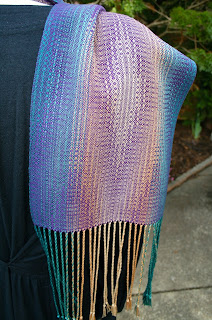 One full repeat again.... plus a close up shot for you to enlarge and see the pattern.  I also want to add that the slightly smaller grist 10/2 tussah tencel in the centre wasn't an issue at all. It behaved just like the rest and you wouldn't know there was a difference at all. (Phew!) 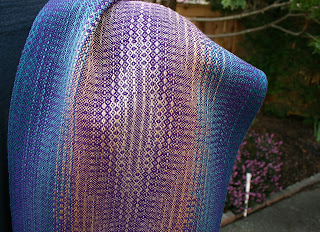 So that 'cold and dark' night is far behind us now and spring is here in all its promise.  Daffies,  cherry blossoms and green leaves are budding and the yard is full of nesting birds competing for worms and bugs to feed their broods.    Lots of fresh starts... and speaking of which....

Our local guild, The Midnight Shuttles, held a 'learn to weave' one day short program at the local community centre this past weekend and it was great fun. It was a 'taste test' of various methods of weaving  and we had participants of all ages: 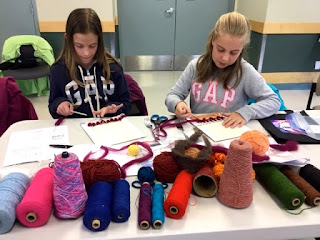 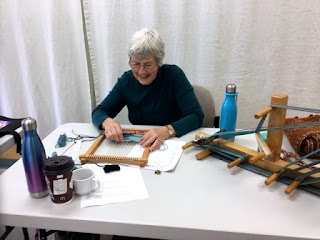 One of our members, Jeanelle, working on a tapestry loom. 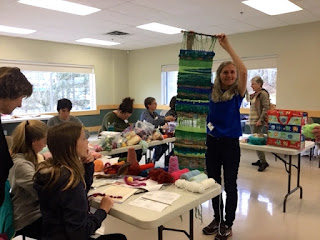 Val showing off her tapestry samples. 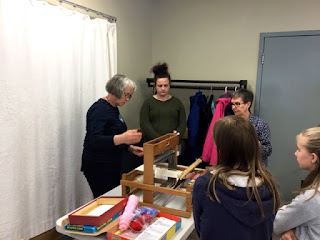 Joyce showing the workings of a table loom.

All in all, it was loads of fun but I came home very tired and ready to  relax.  They wore me out... 😊