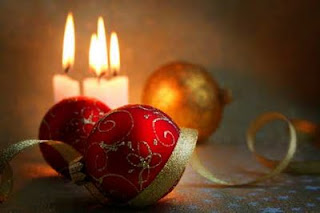 Just a note to say hi.
I guess you are all in full Christmas preparation mode like we are!

This is post is to cover a couple of topics.  I recently had a request to add some way of subscribing to my blog posts. I looked into what is available and it seems that Blogger has a 'feed burner' which I have added to the top right hand corner of the screen.  You simply enter your email address.  They send you a confirmation email which you must click on to activate. What happens then? Well, when I post, you will get an email to tell you. That is only when you'll get an email.  Its a neat service feature and I hope you will take advantage of it.

Edit: I subscribed to my own service and I got a full copy of this blog post, with pictures, on my iPhone and also on my laptop. This was neat! The only thing is, it doesn't give you anything else. You still have to visit here for the other older links to various topics and to visit other blogs listed here. Just letting you know how it works... 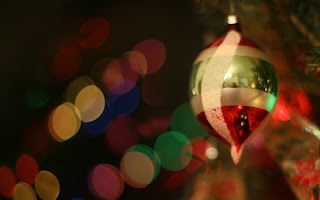 Secondly, I have a count down clock on the right hand side bar for Thrums Blog celebrate another year. That's coming up on January 8th, 2013.  I like to do something special to mark the occasion.  So the one way I can track who does read my blog is through the "Regular Readers" (currently sitting at 277 as of today's date). So if you haven't signed up before now, this would be a good time. Who ever is signed up as of January 8th, 2013 will be eligible to win a prize of  a handwoven tea towel.
I have 'met' some great new friends through my draw: DebbieB, Martha , Dianne, June, and Charlotte who is north of the Arctic circle in Tromsø,Norway ... they are all former winners of my draws.

It will be a busy time here for a week between Christmas and New Years.... and there will be snuggle time with the grandson too. I'll try to get a post up before all the festivities begin! I have been resisting climbing onto the Christmas merry-go-round this year. It just  seems far too much hype this time around. From carols being played *before* American Thanksgiving dirty dishes were washed and put away,  to ads running on the television showing perfect homes and holiday decorations and the (well dressed and coiffed)  Hostess pulling the perfect roasted turkey from a spotlessly clean oven. I'm not trying to be a "Ba Humbug"  but it seems like we have all gone slightly bonkers.  This topic could get quite socio-political, so enough said for here.

There have been just grown-ups in our immediate family for some time and while its great fun to visit family, the real sparkle in Christmas comes when there are small children. That puts the fun back!  I spent an interesting time at a Toys R Us toy store a couple of days ago shopping for our grandson who will be eight months at Christmas! We are looking forward to seeing him and his parents during the holidays.

Someone asked how my hubby was doing since his knee surgery?  Well, for the most part, he's okay but he seems to still have pain and swelling with his knee. Its a slow recovery this time round, and this is his third time for this procedure.  He's not a very patient 'patient' but has been writing his railway stories.  He's soon to publish part three of a story of a tourist train on which he was he was the engineer during 1999-2000. I had a lot of rides on that train and had a hand in some of the shenanigans!

Another person mentioned that Calli hasn't appeared for a while... well, she's doing just fine. She is well settled into our lives and has us wrapped around her paws. She is a real creature of habit and certain things MUST happen at certain times of the day, and she's quite the "Supervisor of the Day's hours".  If you are late with something (usually food related), then you get The Stare until you realize your terrible error: 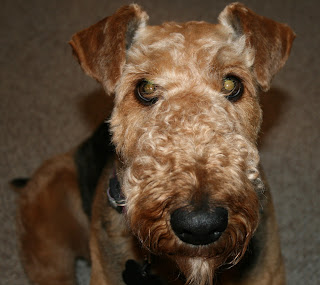 Most afternoon's she stays with me in the studio in this pose: 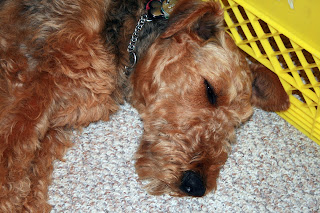 I had the Louet Spring up on crates for a new tie up and she was close by. She really is a sweetie and is very gentle. She hardly ever barks and when she does, the squirrel was asking for it!

Weaving has been slowed by the impending Christmas prep and I didn't have anything to show you but  I do now!  Some time ago I saw a scarf somewhere on the internet where the weaver had used clear lines or borders to divide a double pattern. It seemed to throw more emphasis onto the pattern and was quite effective. Granted they had used a variegated warp which added to the drama but I thought I would give it a go myself.

I found this eight shaft twill pattern in Carol Strickler's  "The Weaver's Book of 8-Shaft Patterns" and played with it to make it fit my needs: 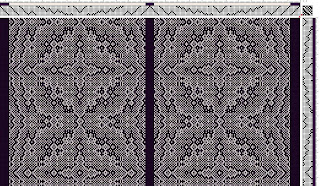 I used a cream 20/2 silk and a hand dyed muted violet 20/2 silk that I bought in 2000 from Treenway Silks. I used a 30 epi sett and a 15 dent reed. The 245 warp ends measured 8.16" at the reed and was 6.3 yards long.  As you can see there is something of a twill progression here and so close attention was required.  While I don't have it memorized as yet, portions of it run nicely one into the other and make sense as you treadle. 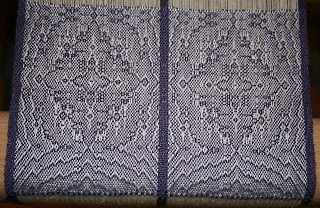 Here is the first scarf under way (all silk) and the colours here are very close to the actual scarf. I've discovered that this violet shows more gray than anything!
I quickly realized that between using some of the violet for warp and then weft, I was running short and there was not enough for scarf number two. It's a difficult match but somehow I wasn't worried (for once!)
Scarf number two was woven using an orlec yarn (yeah, I know...) but the colour was a dead match! That seemed more important this time round... 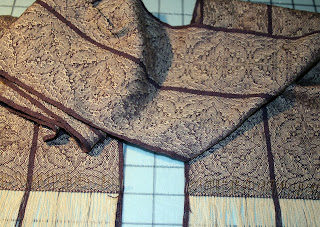 Here's one on the fringing board and with the slightly yellow halogen nearby, the scarf turns more gray. Of course that nicely demonstrates that purples and yellows are opposites on the colour wheel and where they meet is gray. 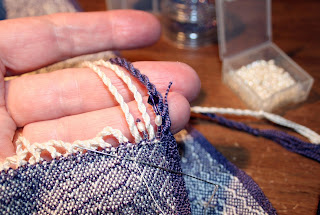 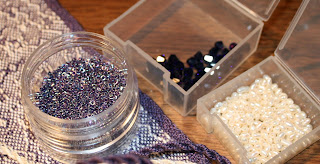 Next up was adding some glitter. It seems to be my trademark feature. These scarves have a lovely soft hand to them. You can't tell the difference between the all silk and the one that has orlec but I *know* the difference. I changed the beading arrangement so I could keep track of which is which for sale purposes.
I used 11/0 Japanese Delica beads in a soft violet that are lined with silver so they sparkle, creamy seed sized fresh water pearls and rich purple Swarovski bi-cone crystals. There's fifty six pearls per scarf alone.  Its totally feminine. 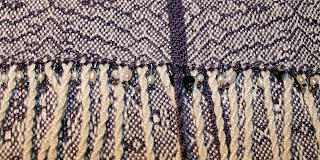 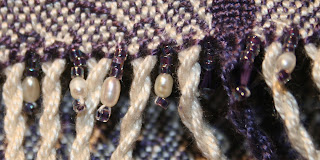 In this picture above, when you enlarge it, you can see the natural pearls, wispy little strands of silk made by the caterpillar, all along with computer made beads from Japan. Quite the amalgamation!

We had some brief sunshine this morning and so I set them up on a white background, all the lights on full and flash on the camera... but I think they are too dark. There's nothing like real daylight to show something off naturally.  (Hurry back sun!)  I think I will re-shoot them another, brighter day... 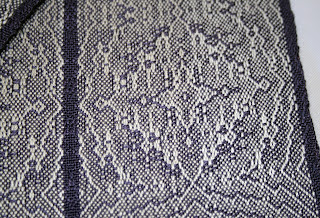 This is the all silk scarf  (above) There is cleaner colour definition between the cream and violet. 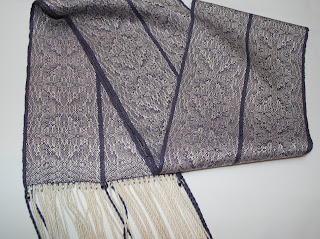 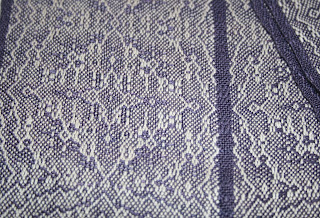 This is the orlec weft scarf. It has more of a purplish cast to it. The yarn seemed finer too.

I'm in the middle of threading the Louet Spring to weave two table runner in the same pattern (but no stripes!)  Its a slow go with all the Christmas running around going on right now but I suspect many of you are having the same difficulty.  The snowflake scarves are still under way on the big loom and calling loudly.

I just keeping thinking that weavers 'down under' don't get interruptions in the middle of their prime weaving season. Their winter is in July! 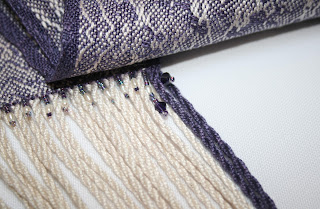