On July 3rd, 2018 : We had come from our appointment at Comox Hospital and had been given the 'all's clear' for Bruce's scan so we were feeling happy ....and a bit adventurous.  We drove up Comox's Lerwick Road heading southwards until it reached the end and found ourselves at Cape Lazo.   Its roughly just below the horn shaped  piece of land.  It was a glorious day with a cooling breeze, not overly warm  and low tide.  In the map below you can locate Lazo Road and where it hits the shore line. The video below was taken from that point. The area in the map above Cape Lazo is the bottom end of the Comox Airforce base 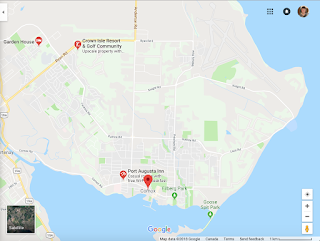 The islands you see off in the distance of the Salish Sea (formerly known as Georgia Strait) are Texada Island where you can see the limestone quarrying operation, and beside it is Lasqueti Island (pronounced 'lass-skeeti').  Closer to the coast of Vancouver Island is Hornby Island.   Yes, many people live on these islands and have rather self sufficient communities. They use the inter-island ferry system to get to either the big island or over to the coast and Vancouver . Its quite a lifestyle.

Here is a brief sweep of the view from the Cape. Starting towards the mainland and Powell River, with Texada and its obvious mine right up close. Then sweeping right past Hornby and towards the Island and you can see the snow covered mountains that run mid island. It stops short of showing you the Comox glacier... 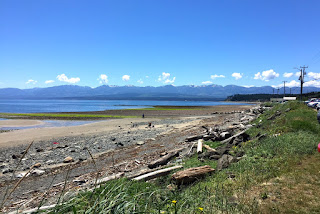 There was a low sandy grade and a natural pool that was perfect for kids or dogs to play in. Sun warmed water; lots of sticks, sea shells and tide creatures to find under shore debris. Or simply squish toes in the warm wet sand. 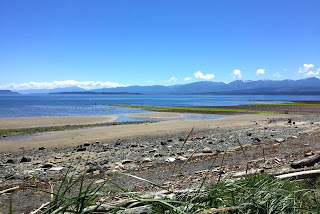 These three pictures are a panorama sweep of the bay from right to left. I was surprised by how few people were here. Parking was right where we stood and lots of it.....  It was like a best kept secret. 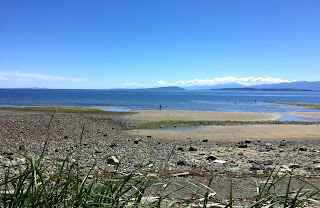 So we carried on our journey around the bottom end of the peninsula, heading roughly west towards the downtown area, but still near the water and found ourselves at Marina Park.  A very large open green space right down by the water. Trees, grass, a public gazebo, concession stands and public facilities.  There was a children's playground and waterpark and people enjoying the day. 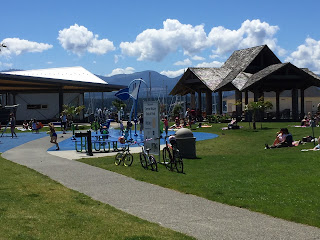 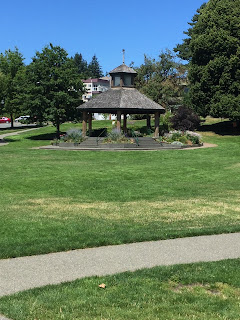 Nearby was the marina facilities and Government dock, complete with a restaurant nearby and stunning water views. Now if you click on the picture below and enlarge it, you'll see just under the cloud layer, the Comox Glacier. The winds that blow over that bed of ice keep temperatures in the valley cooler. (or as a friend who lives here says 'sweater weather' 😊) 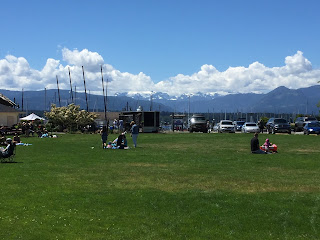 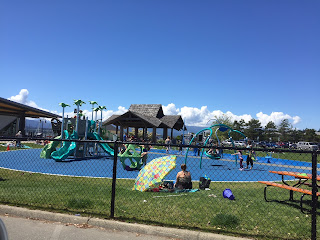 I have two maps for you to view: The first gives you Vancouver Island and you can see how far the distance is between Campbell River and the Courtenay / Comox area is. It takes us about 35-40 minutes.  There's a fast highway mid island or the more scenic ocean side drive. 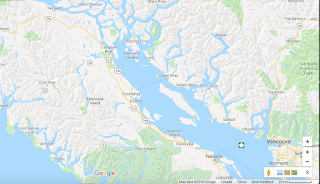 The second map brings up the smaller island names with a closer in view of things.

We hope to do more day trips and share them here with you. Vancouver Island is larger than some states, or countries for that matter.  From Campbell River and heading north, there is still half an island to go yet! 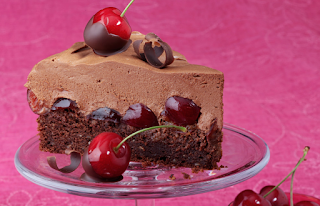 Chocolate and cherries make a fine pairing for dessert. I still recall my first Black Forest cake when I was a kid.  My mother's Viennese born neighbour and best friend could make them like a pro! Then, in the 1960's  there was those large chocolates that were filled with a maraschino cherry called Cherry Blossoms.

So when I spotted a painted warp at Iridescent Fibers called Dark Chocolate, it appealed to me. 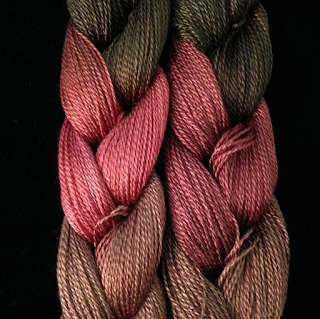 Now this wasn't in the range of my normal 'go to" colours and quite daring. After it arrived I liked it and then it hung with some other warps while I pondered what to do with it and ... what the heck would I use as a weft colour?? (That's a thought that should have run through my mind before I bought truthfully....) 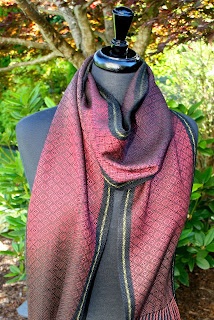 Its black that works best.  I had nothing in my tencel or even silks that looked decent.  Black makes the colours really pop and somehow really intensifies them.  I framed the painted warp with black and a touch of olive green. Its the same draft as my previous scarf warp that were done in deep midnight shades.   So we are talking same 12 shaft point twill, same tie up, same 24 epi..... just a change in colours.   I get more from the same tie up and that is helpful since I have to lift my loom up to change it.  Here's the draft.... with an arbitrary colour in the centre to denote the painted warp portion. 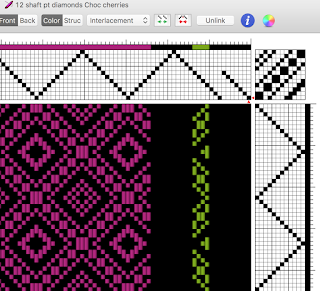 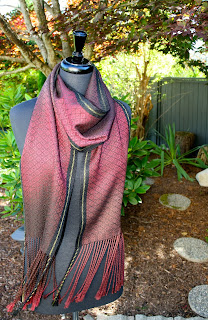 We had a fine breeze blowing as I took these pictures!  I had to strike a balance between getting good light, but not bleaching out any of the colours, or being in the shade and having everything too dark. I settled for later afternoon natural light but not in direct sunshine.  I was pleased with the results and the colours (depending on your monitor) look fairly accurate. 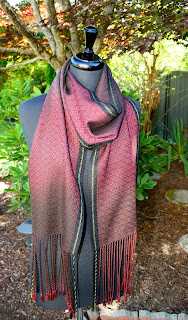 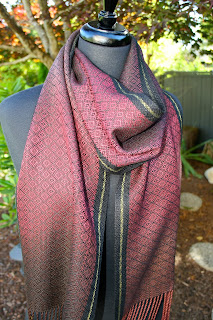 ...and while I had no control over where the colour placements would be, it happened the cherry blush  occurred in roughly the middle where the extra loop around the neck would go.  Sweet! 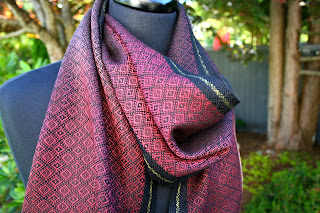 Its quite a warm rosy glow and as you see below, the milk chocolate has a gentle run through. 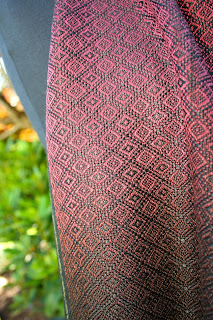 In the picture below, you get a glimpse of the back side.... where the black is more dominant. I prefer the brighter colour side out... 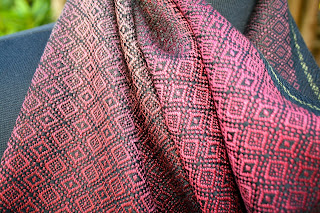 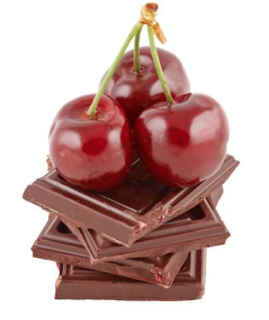 As you can see a change in the treadling makes a big change in the pattern.  This is why I like playing with my Fiberworks program so you can see what will happen if you changed a few details. Check the float length, and view the back side etc.  Can you imagine trying this with expensive yarns and the time involved?  Well, it sure is more fun this way. 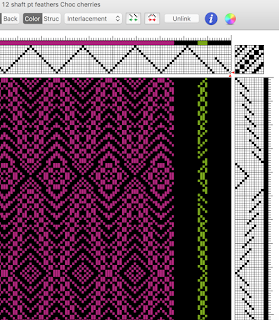 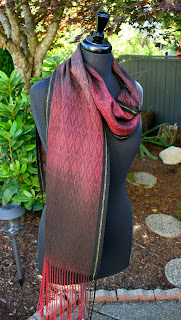 These two are very alike except for the lighting..... and the real colour is somewhere in-between the two of them. 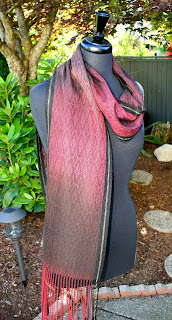 Here's a few that get closer to see the details better... 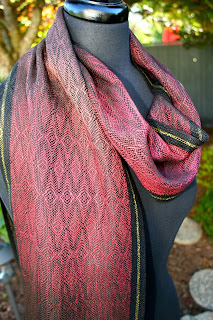 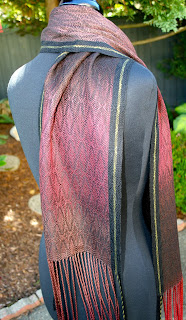 My model's name is Judy and she did a fine job in a stiff breeze. Very steady on her feet, never complained or needed a break. (She also doesn't mind partial nude shots either... ) 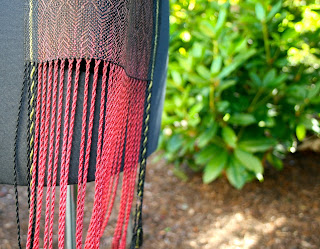 The colour changes happen where they happen.... and it makes for some interesting fringe! 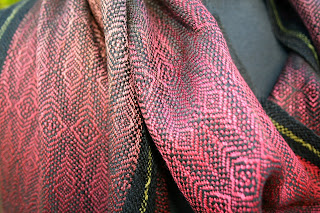 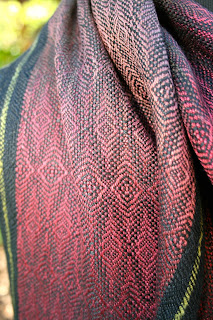 Couple of notes to share.
Its been just under two weeks since Calli died and we are feeling a bit better day by day. We still have our moments of course, like reaching for a box of her favourite cookies at Costco and then having a quiet cry in the back aisles before soldiering on.  We are adjusting to a very quiet house and the night sounds weren't Calli trying to remake her bed at 3 am but a raccoon on the roof instead.

We have our name down to get a new dog... a terrier of course, and that will happen either later this fall or next spring. Depends on the litters, and the length of the line up ahead of us.

and then there's hubby Bruce:   He had a standard CT scan to look for other potential tumours in parts of his urinary system the doctors didn't get to check at his procedure in May. Its called due diligence. The doctor who reported on the scan found a 'shadow' and so this meant going back in for another look to see if the cancer had started to grow back.  So for some weeks we have had this hanging over our heads yet again.  The recheck was done this past Tuesday and with many apologies from the doctor for the scare, he was declared free of anything new!    (now he still has to have rechecks periodically, but at further and further time intervals).   Kidney stones? well they are using fresh lemon juice 🍋 and a special medication taken daily to soften and dissolve the stones (based on their composition). That's far better than surgery!   So good news  and we can get back to enjoying our summer.