One can only imagine that John Lennon would have cried at this
🇺🇦 🌻🌻🌻 🇺🇦
Posted by Susan at 4:12 PM 4 comments:

Spring arrived yesterday but you wouldn't know it by looking outside. Stormy day with blustery winds blowing in a steady drizzle of rain.   It looks cold too.   There are valiant early spring flowers poking their heads up and birds are returning and looking for nesting spots.  The starlings that nested in our eaves last year will be in for a surprise as that was well barricaded to evict them!
So we have been super busy with many medical appointments.  The ones that were put off due to the omicron wave, and the heavy snowfall in December.   There seems to be something on the list for almost every day as we catch up so weaving has been hit and miss while we be 'good adults'.  Even the taxes were done....   😳
So I do have a project to show you but must say that these pictures are not their best and brightest. They were taken indoors and in order to show you the 'white on white' pattern blocks, I needed some awkward lighting. 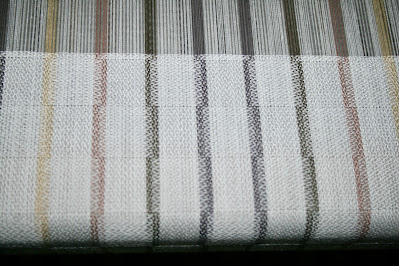 Draft 246 from  Carol Strickler's classic " A Weavers Book of 8 Shaft Patterns" seems to be a favourite among weavers. The satin blocks, when using colour to best advantage seem to look woven over and under each other.   I love some of the colour combinations I have seen but it can look rather 'busy' visually.  I decided to try some table runners in a finer 10/2 mercerized cotton, sett 28 epi. A snowy white and softer muted colours as striped defining the borders.  Cameo Rose, Sponge (moss green), Frost grey (silver mauve),  and Autumn blonde. Without really trying, I was weaving something that said Spring.  🌷 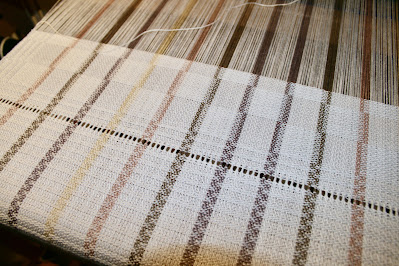 After six inches of hem allowance, I did ladder hemstitching. The cotton has some bite to it so you are able to pull tightly and have it stay put as you work. The 'ladders' are nicely defined. 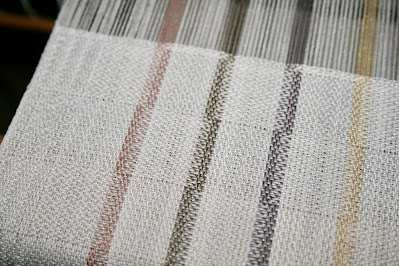 This picture above shows the changing blocks and how the stripe appears to do a side step. 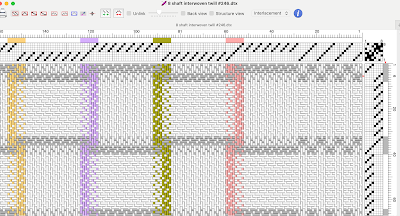 A screen snap of my draft.  I was originally going to use a soft silver grey weft for the cross stripes, but my actual cone of silver grey was too dark for my liking and I preferred the white instead.  As you can see, the blocks can be of any size you like, depending on the yarn size used or the look. 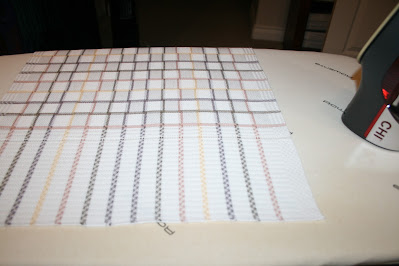 I serged the runners apart and hand washed them. After drying on a rack overnight, they were steam pressed and then shifted to the ironing board to turn the hems.   Dividing it into thirds and pressing. 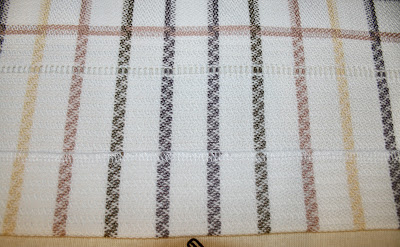 With the final third brought up to the bottom of the hemstitching, it was pressed again and pinned.  It all folded nicely and stayed put as I worked.   Then I hand sewed the hems using a running blind stitch and also closed the end open loops of the hem.    Pressed it firmly again.   Most women hate ironing, but its a valuable tool in the weaver's arsenal of finishing tricks!  (Don't skimp on price and buy a heavy one.  I get compliments on the appearance of my final woven projects, but the main secret is my iron ! )

Front and back of the hems. 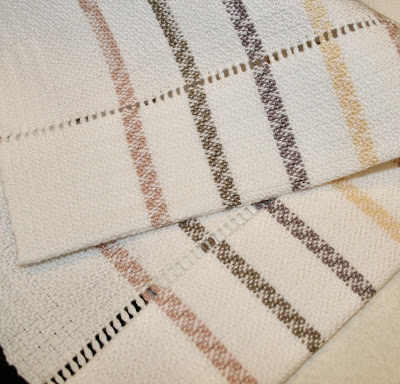 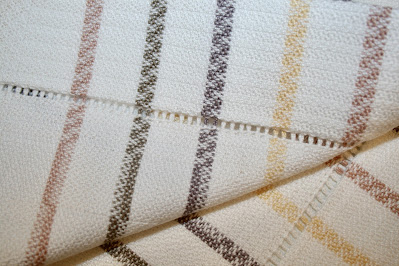 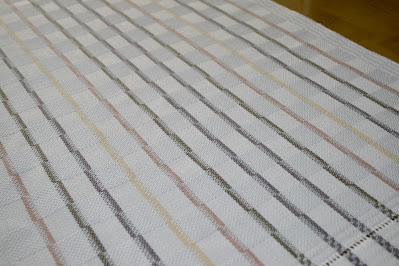 The last runner I decided to try cross stripes and wove a runner 17 inches by 58 inches.  I think with a colourful table cloth underneath, such as mossy green, it would be a nice runner for Easter. 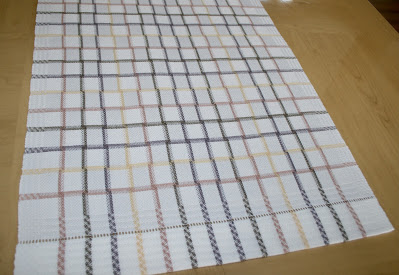 My big table is approx 94 inches long so even 58 inches looks short here! I have chairs for six but it can comfortably seat 8 people. 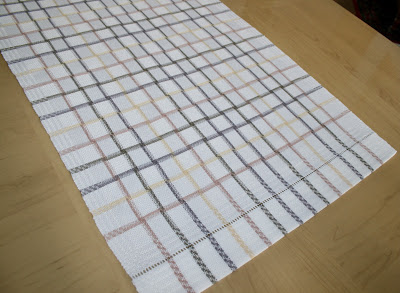 I'm trying different angles here to get the light! 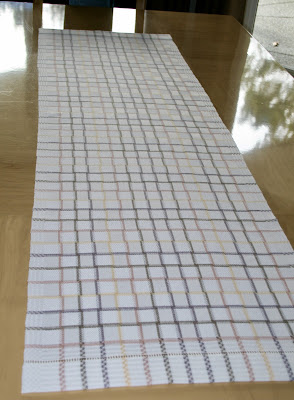 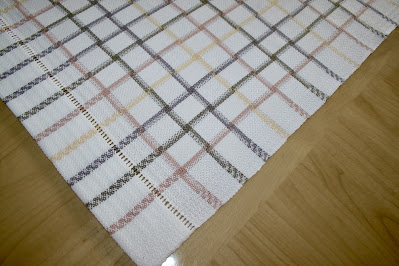 This last darker shot is to show the changing blocks. Next time I use this pattern 246, I'll try the more colourful versions and weave up some happy kitchen towels. 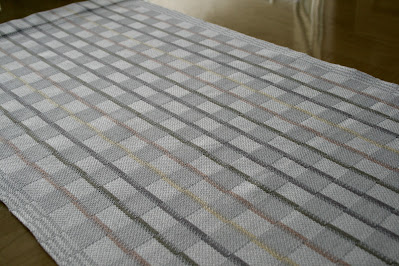 So what's up next?   Scarves and they are under way. After that?  I have a warp would for kitchen towels and a friend is having a baby so I'm looking for drafts and cones in the stash for that.
🌷🌷🌷
Posted by Susan at 1:14 PM 3 comments:

A Tale of Two Shawls: part 2 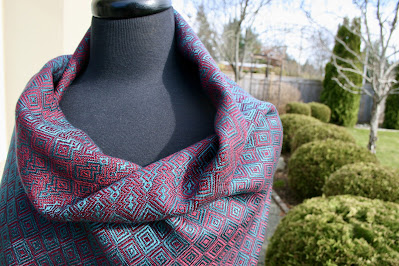 The second shawl is all finished and finally photographed.  I find bright sunshine will bleach out the colours much like a flash on the camera. So yesterday there was some high overcast clouds here and it seemed to be the best I could hope for and so I got busy snapping. 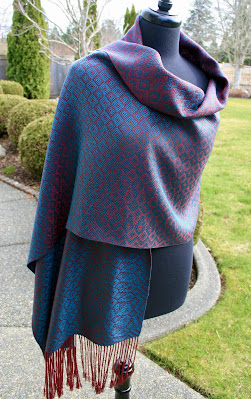 The finished dimensions are 21 inches by 83 inches, plus the fringe. So you can elegantly drape the cloth. 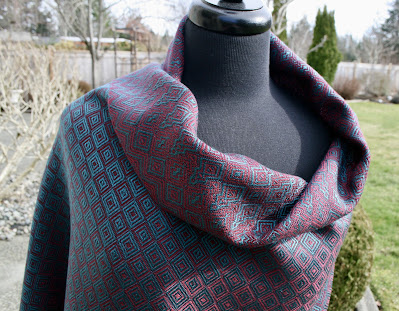 The rolled over section around the neck shows the shawl's other side which is slightly more warp dominant. Also, the fuchsia does appear less intense here. The sunshine was still a bit bright, even with high cloud cover. 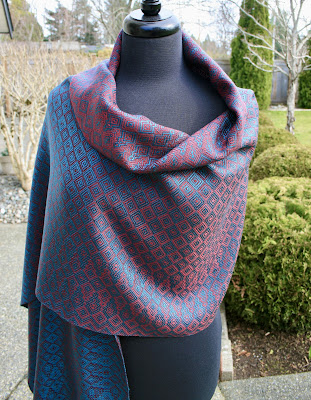 Between the picture above and below, you can see the iridescent effect.  It somehow reminds me of some of the Venetian fabrics you see in old paintings. 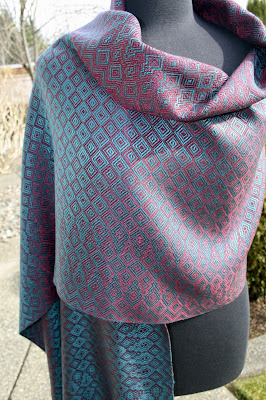 I found the fuchsia 8/2 tencel a bit softly plied and so I had some issue with fraying in the first shawl. This time I used a temple and it went much better, if slower for weaving.  Interestingly, the final width of this shawl was 21 inches, same as the first shawl I didn't use a temple on.  The final length was 83 inches but was woven to the same length on the loom as the first.... so another mystery! 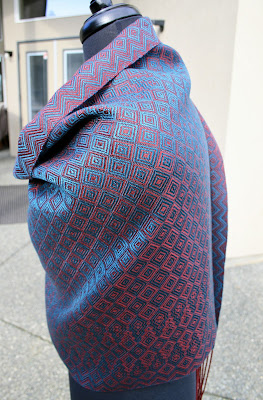 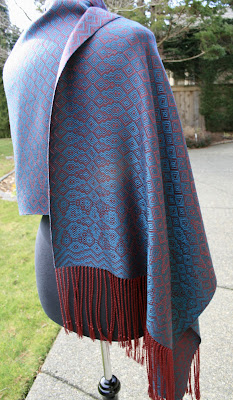 So we have crocus and snowdrops up and other little shoots coming up, and buds appearing on the trees.  We have seen flocks of redwing blackbirds pausing here as they migrate through and  crows flying overhead with nesting material firmly gripped in the beaks.  The new season and life in general  is rolling on but its hard to see any joy when the Ukraine is being bombed into submission by a dictator.
Canada has the highest concentration of Ukrainians and their descendants living outside of the Ukraine and they immigrated here and settled mainly on the prairies.  My parents came to Canada in 1960 and settled in Saskatoon, Saskatchewan. Our next door neighbours were an elderly Ukrainian  couple and they made our family feel welcome and they became like substitute grandparents to us.   My mother learned how to make cabbage rolls from them and they became a family favourite ever since.   Another memory I have is visiting another Ukrainian family and helping to make perogis by hand and I helped pinch the edges after the filling went in.   They are such warm and generous people and simply don't deserve what is happening to them now. 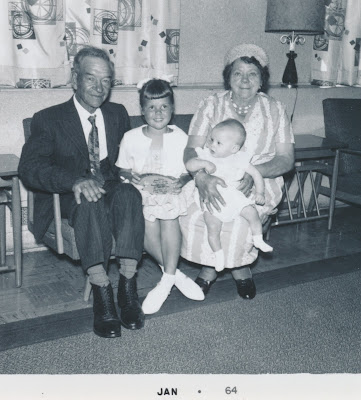 This is a picture of the couple that lived next door to us and helped to make us feel so welcome.  It's taken at my brother's christening  in 1964 and I was 8 years old.  Sadly, I don't recall their names but I remember the feelings and somehow I think they would be okay with that.....
Canada is once again opening their doors to Ukrainians to come and live with us again and they can be sure of a warm welcome.   🌻🌻🌻 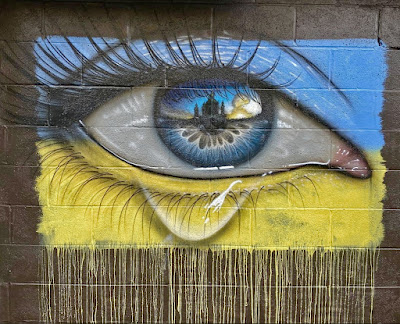