Our painter came by yesterday to finish off the final touch up's and double check the work.  We sat in the back patio and enjoyed a coffee together and also met his delightful daughter who is going to be his helper on the next job.  Poor guy must be careful of his back and pinched nerve but he swears he's ready to work again. 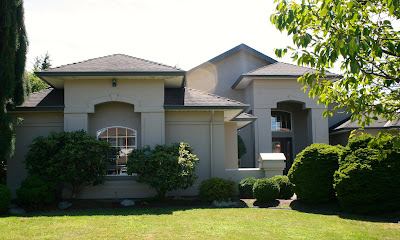 Hub took these pictures yesterday afternoon, just after they left. We heard we had cloud cover coming in today, a chance of much needed rain and to be followed by forest fire smoke. So better to do it sooner than later!   The sun is higher and a bit harsher than we would like so we're going to take more pictures when the sun is a bit kinder.
We have a comforting  coat of  quality paint called "Stone Lion" now, with the blue grey trim and gutters (basically the existing colour, but refreshed).  Glen did some free lance stuff and did small things like electrical outlets, the ring around pot-lights, door handles, electrical boxes in jet black.  The front door was done in a rustic red.    All gutters and soffiting were cleaned, moss removed from the roof and all concrete work power washed and so much brighter.   That's a big job for one man and one week. 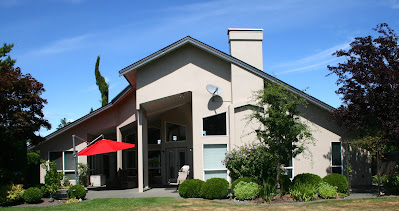 This is the back view: the windows on the far left is my studio. We like having a portion of the patio covered by the roof line as we can sit outside even if its lightly raining. 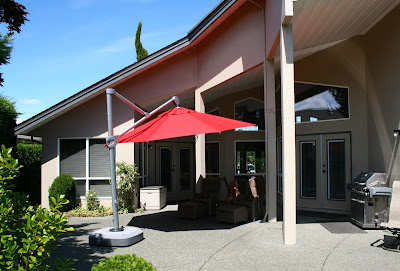 A closer view: in the shade are two comfy wicker chairs and little table that we sit at and enjoy a cool drink together. 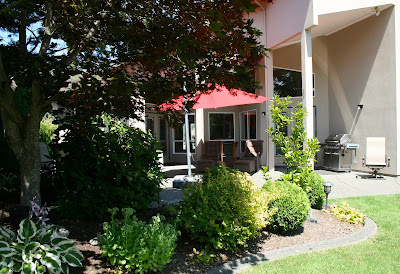 Even the garden sheds were done to match so now we look like we have little "mini-me's". 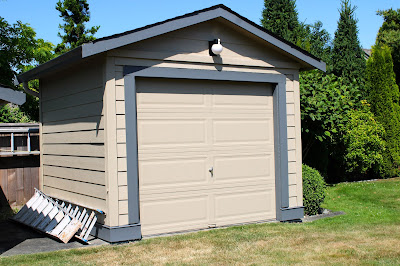 The window on this shed has a metal mess over it as being next door to our neighbouring golf course, rogue golf balls happen! They have to be really bad golfers to hook one over here. 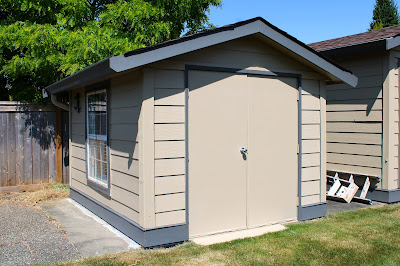 So a final view from beyond the back fence which is as tired as it looks.  That is in fact next years project.... to replace all fence posts along the back run and the posts besides the gates. The pickets are metal.   At the current price of lumber, that's a major deal to prepare for all by itself! 💰 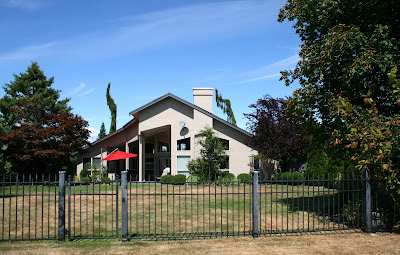 So what we realize now is that we need a splash of COLOUR!  Some flower baskets and topiary planters out front, maybe a wooden bench by the front door.  They add so much life to a home and more pizzaz!   We also usually have hanging baskets in the back patio area as well. This year we thought the painting was going to happen in May, then it was pushed to June and then finally July, so we didn't shop at garden centres this season  and have put the funds towards the painting project instead.  As luck would have it, the heat dome would have pretty much killed anything we had as it is. We have hardy shrubs that have sun damage now and so I don't think hanging baskets would have survived unless we put them in the garage.
We're going to shop some 'end of season' garden shop sales and see if we can get some lovely big pots and then spend the winter planning what bedding plants to fill them with.
🌻🌺   🌳  🌸🌼
Posted by Susan at 2:38 PM 3 comments:

🧗‍♀️ Many Ways to Climb a Point Twill Hill 🏔

I recently saw this in an email from Long Thread Studio who publish Handwoven magazine for weavers:

“Fun fact: There are 65,534 tie-up combinations on a 16-shaft loom.” To which I replied, “And I bet there is someone out there trying them all.” Although I didn’t know the validity of the number at the time, I was pretty sure I was right that somewhere in the world a weaver was trying every tie-up combination, “just to see.”

I had bought a large 3 pound cone of natural 8/2 unmercerized cotton "ring spun" from Unicorn Weaving Yarns (Quebec) on Etsy.  I planned to do a long 11 yard warp and then weave 10 towels and each one a different tie up / treadling on my Megado.   The cotton showed me a hint of what was to come when I took the first bout wound off the warping mill as it all twisted up on itself! 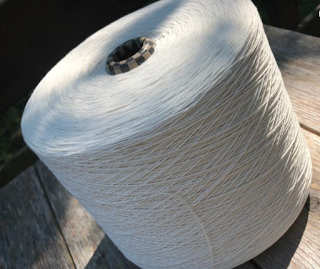 Beaming the warp was tricky due to the curl or energy in the yarn. It looked like a nice even two ply to me but....     (Oh, I have two more 3 lb cones of this yarn so I hope they aren't all like this!) 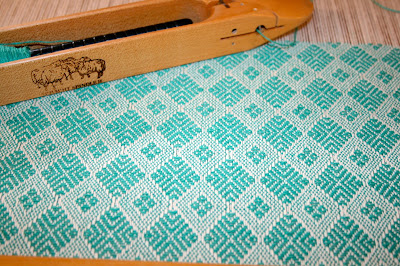 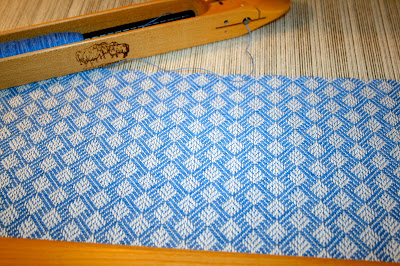 Weft was from 3 colours of Bockens Nialin cottolin in a green turquoise, mid blue and an oatmeal shade.  I'm trying to use up the last of this stash.   ⭐️   Gold star for me! 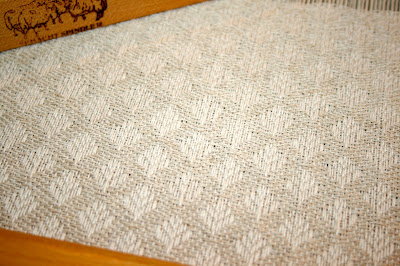 This sweet little 5-6 inches became my samples for my records.

I wove four towels and was about to weave number five when I noticed something iffy.    I looked carefully under a pick glass and saw that I had ONE thread missing from the threading sequence.  It didn't show until I changed to the new treadling and then became obvious.    😢

I cut off the four towels and rethreaded the left 4-5 inches of the warp, resleyed and tied back on again.  Once you know... it has to go!

So I have some samples and nine towels.   Only one towel has an obvious mistake and all four of the first towels are being gifted to relatives, who either won't notice (my brother) or if they do, know enough to keep quiet as they won't get anymore.  Towels work perfectly as seconds regardless. 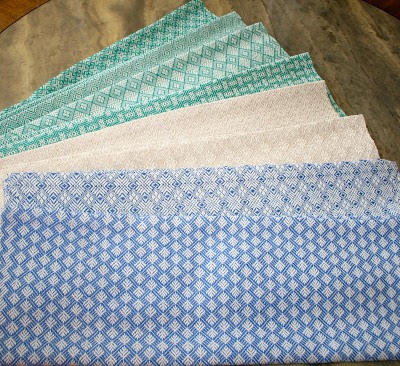 Eight towels here.... with one blue one off in someone's kitchen already! 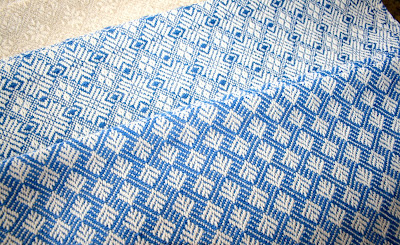 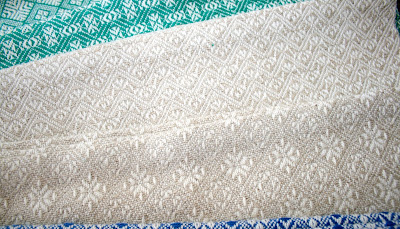 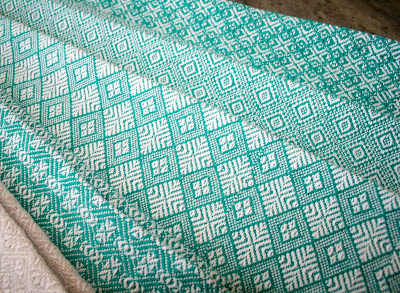 The green turquoise...    (the gifted towel has the same pattern as the large diamond in the centre of this grouping, but in blue)

One towel was gifted immediately to our house painter for his Dutch wife so I wasn't able to get a picture of it before it went.  The man had just single handedly painted the whole exterior of our home and 2 garden sheds in five days so they earned a gift of a blue and white towel.

So in the future I will wind only a short warp with this cotton as its not worth fighting the curl.   Or use as weft?  It will be used up though...   the hand and softness of the cloth shows it was worth the battle.

Some individual pictures showing both sides: 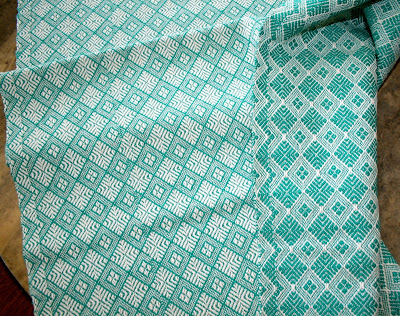 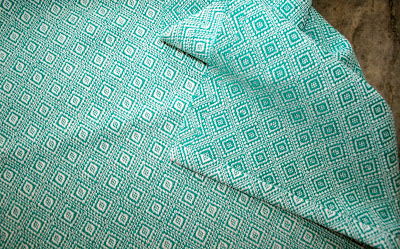 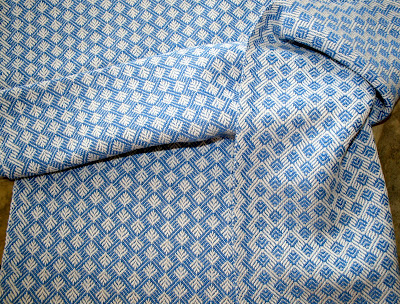 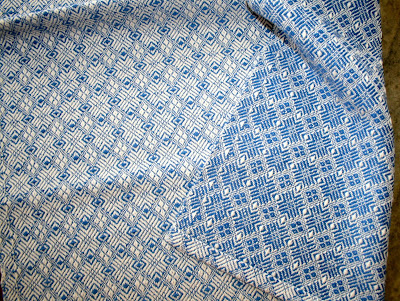 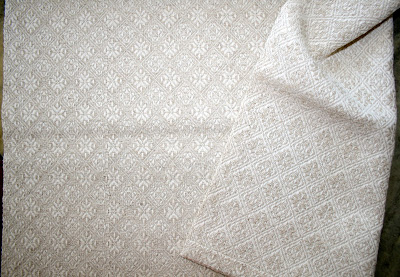 There will be more pictures to come of our newly painted house but a slight delay as our painter has hurt his back..... but soon!

🏡 A Lick of Paint

We started to explore painting the house last summer and had three quotes from various businesses.  There was quite a wide range of services and pricing and not everyone was willing to do extra if required. 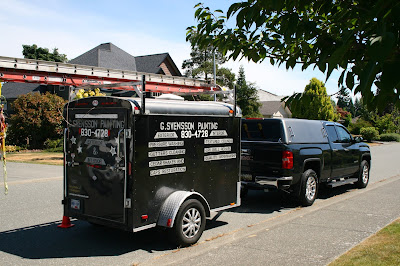 Last October we met up with Glen and he was willing and able to do just about anything required. From minor repairs, to de-mossing the roof and of course painting.  We felt quite happy with his pricing too, as we had really researched various costs for the various jobs to be done.   Its taken some time for our place to come up in his roster for this year but he did manage to get all the concrete and house power washed just before the 'heat dome' hit us.  So after that heat wave hit, we knew that everything would be bone dry and ready for the rollers and spraying.

Glen started yesterday and is a going concern from 7:30 am to when he feels he's done for the day.  Our house and two garden sheds is a three day project (maybe four?). Not bad for a guy working on his own right now.

So he's busy on the south end of the house right now until it gets too warm there and he will shift back to finish the front entry way.   Bruce went and took some pictures to show areas of the house with before and after colour changes. We'll do more pictures tomorrow and again when its all done. 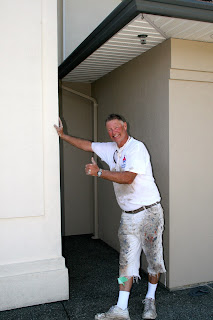 Glen taking a moment in the shade. Behind him the new colour and he's resting his hand on the old paint. 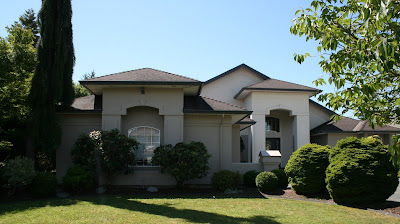 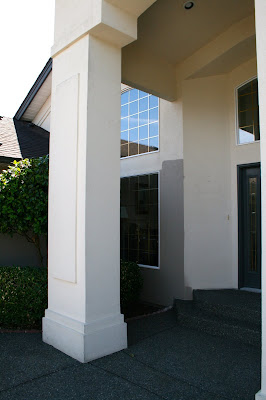 Again... showing the transition. Bear in mind this is currently in the shade. It gets full morning sun. 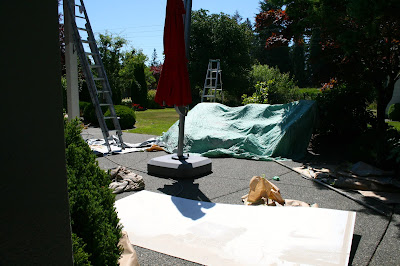 Patio furniture and shrubs are all covered against any overspray. Windows are covered with brown paper.
🚧  🚧  🚧
More to come.....
Posted by Susan at 12:49 PM No comments: