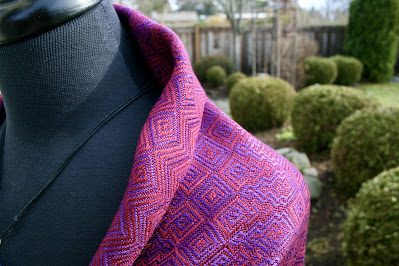 Last  autumn I had an order of  six cones of various yarn from Webb's arrive and when I opened the box there were seven cones. It seems I inadvertently ordered two cones of fuchsia 8/2 tencel. Oops!     I thought I might as well jump right in and do something special with it then.

Two shawls, all with fuchsia as warp. 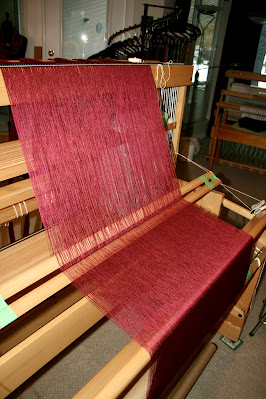 The 16 shaft draft below really appealed to me as you can have a decorative border all four sides.  It's also reversible which makes it ideal for shawl or scarf wearing, or even a nice table runner. 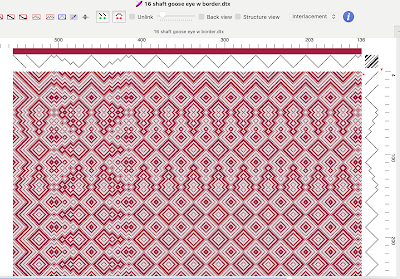 The first shawl was woven using amethyst tencel as weft and I wasn't too sure if it was the right choice but I kept on with it.   Then Hub wandered in and saw it and said "its kind of blah" and I immediately jumped to its defence and said not everyone wants to strut around like a peacock. Besides, fuchsia is not exactly a quiet colour!   Quietly elegant is what I had in mind. 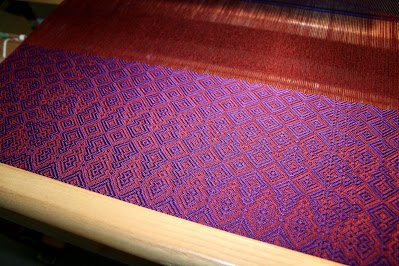 This picture taken while still on the loom shows the leading border. The centre of the whole draft is goose eye twill diamonds and so I settled into some steady weaving. Except for some  abrasion issues with my floating selvedge on the right hand side. I had to do some repairs on the fly.   The next issue was some softening of the tension in a spot or two. I kept going but had decided to cut off the first shawl and then re-tie back on and hopefully eliminate my tension problems. 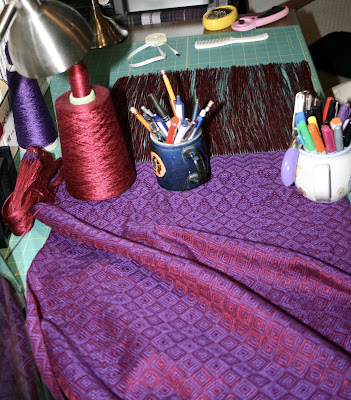 In these two pictures I was preparing the fringe allowance and getting ready to twist the fringe. The cloth hasn't been washed and just as it came of the loom and you could see the potential already! These two pictures were taken by Hub and he had revised his opinion already. 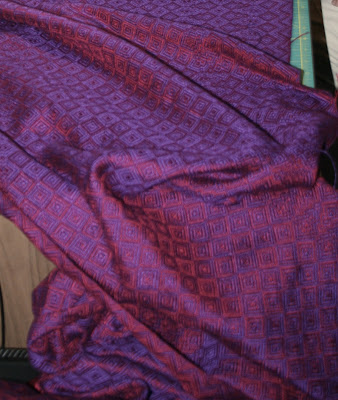 So after a good wash by hand and a night drying on the rack, it was given two pressings. The first with the steam press, and a second by hand iron to smooth and bring out the shine.  The steam press helps me a great deal as I have arthritis in my hands  and I'd rather save them for shuttle throwing!   You pick your battles as you get older. 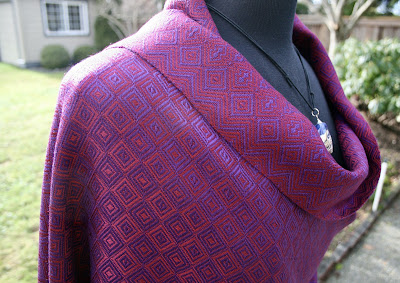 The sun finally reappeared and it sure does feel like spring on a day like this. I've seen a few robins, and a whole flock of red wing blackbirds this morning, and there are some shoots coming up for the start of a new growing season. 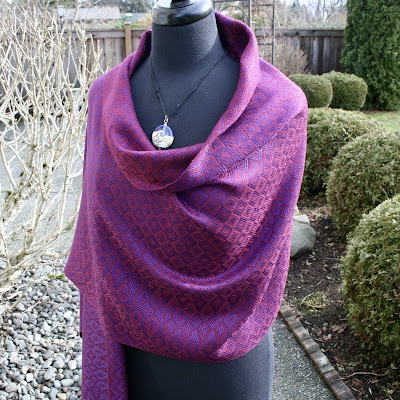 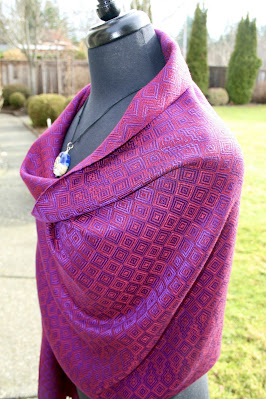 Below you can see the borders. 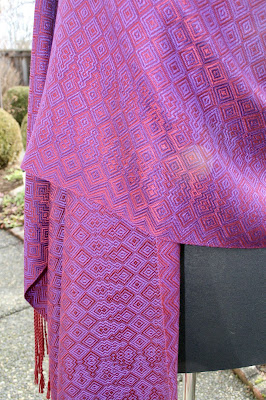 The drape is just lovely. 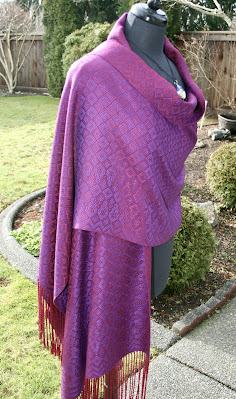 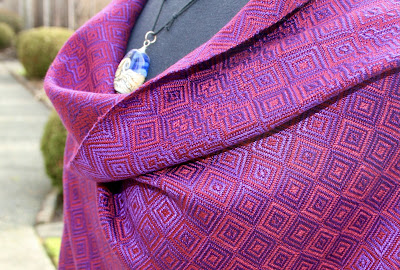 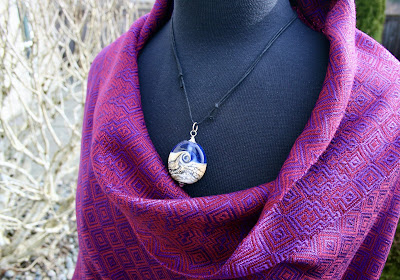 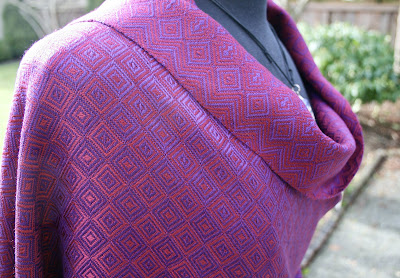 I was trying all angles to get the best view. When viewed inside the house, the pattern sort of blends into the background and is not as obvious until the light hits it.
The second shawl is under way and the tension is much better. I'm also using a temple this time and so the tempo is a bit slower.   No one is going to call this one blah..... here's a sneak peek! 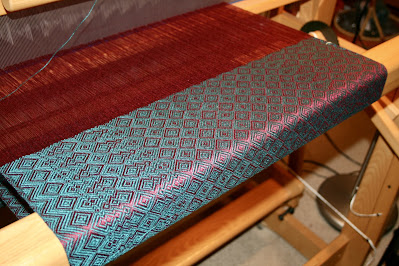 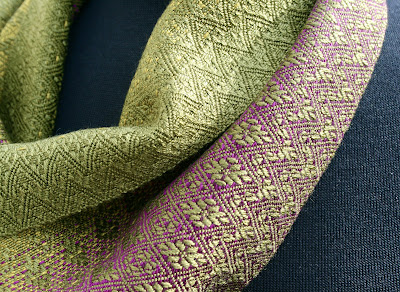 Back some weeks ago (okay months!) I had big plans to weave up the first draft below, and no, I don't know where it came from. I just squirrelled it away.

I had planned a gradation of four colours: olive, old gold, red purple and eggplant 8/2 tencel, 24 epi, and as you can imagine the warp winding took some time.   The threading was straight forward and I even got a small sample done.

Next morning I discovered my computer had done an upgrade. Not just the latest security updates, but a whole new operating system called Big Sur.  POOF, all my Fiberworks files vanished, along with 6000 pictures of all my weaving and family pictures.  🥺  The pictures were in a program that Apple no longer supports so it axed them. 🪓

I have a two terabyte back up drive and my sample / paper records and also actual photographs so I can recover much of what was lost if the back up drive thing doesn't cooperate.   Right now, I'm considering a whole new computer and so will recover to that one in time.

So I had the threading and warp in place and a newly reloaded ( and off line) old Mac running  Fiberworks.   I went touring around Handweaving.net to find a substitute draft and found this one. I added to it it to reflect what I already had on the loom. Imagine more points in between edges! 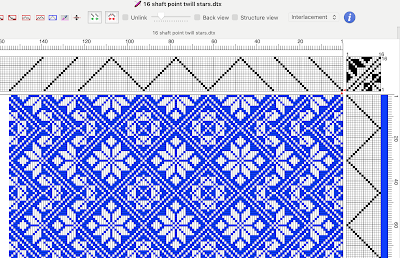 Some issues kept me from treadling (toe infection and shoulder strain) but I completed them in December.   Snow, cold snaps and dark gloomy days made getting a decent picture pretty much impossible.
I hope you find these worth the wait!
7 3/4 inches wide by 72 inches long. I used the dominant colour from either edge as weft. My personal favourite is the green. 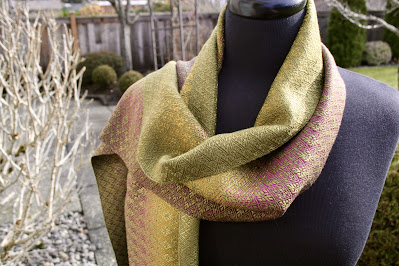 As you can see we have no snow now and the garden looks very early spring like!
🌷 Flowers and Stars 🌟 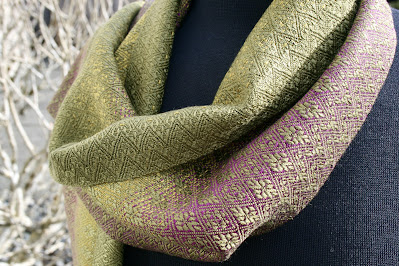 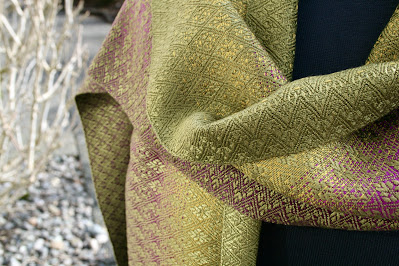 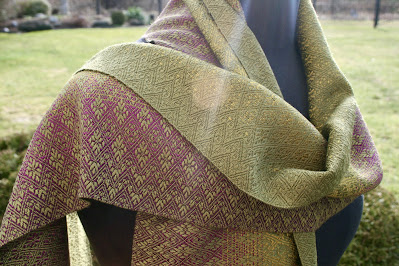 Excuse the sunspot, but it was a nice picture even so. Below you can see the colour shift. 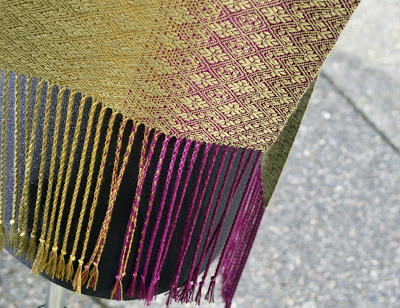 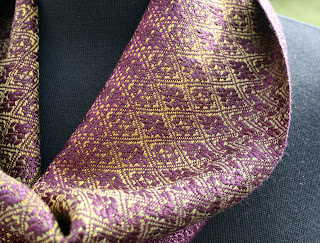 This shows the reverse of the pattern. 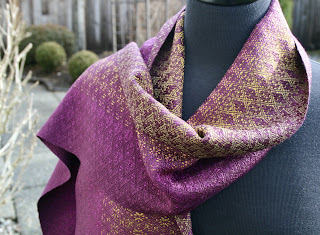 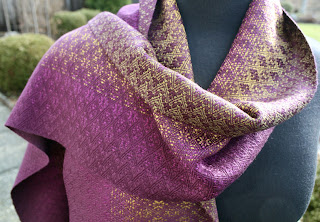 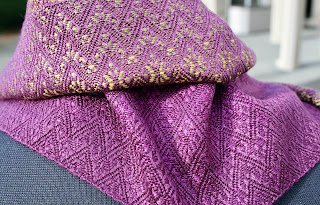