I belong to a weaving group on Facebook called Strickler in Color. Its where weavers share a draft they have woven based on the book and their interpretation and colour choices : The Weaver's Book of 8 Shaft Patterns by Carol Strickler. 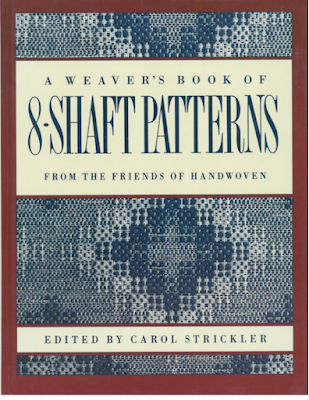 All drafts in this book are shown in black and white, or light, medium, and dark grey tones.   The focus is on the pattern. The focus of the group is show off colour!   How they have interpreted the draft.     By far and away the most popular draft is #728.    The draft just ends its self to so much variety and is just plain fun to weave.
It was actually submitted by Joan McCullough (of Campbellford, Ontario): Rosepath in multiple tabby weave, page 48, from The Rosepath Motif : An Approach to Weaving Design by Margaret Windeknecht. Published in 1987.
I have woven this before and  it seems the right time to do it again..... and in my favourite  colours and weft choice     So six towels all roughly 20" x 30".   8/2 cottons from Brassards, 24 epi, and hems are hand sewn to void the "stitch ditch" line. 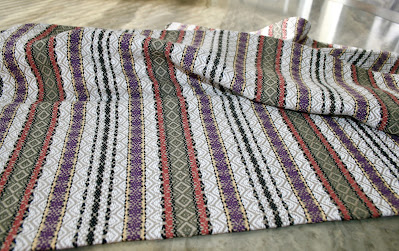 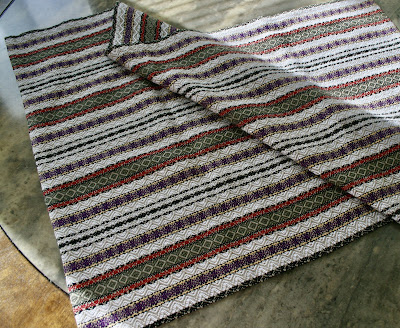 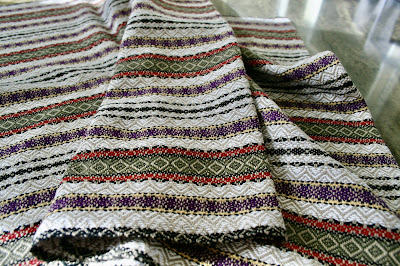 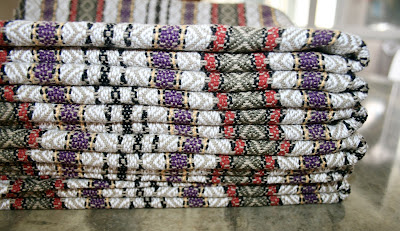 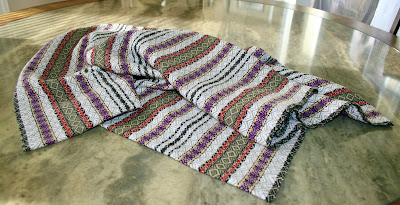 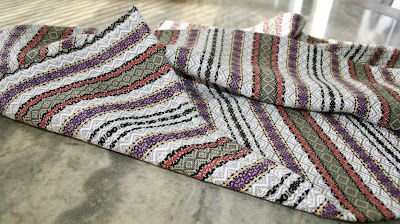 The hem is flipped so you can see the reverse.... its just as pretty on the other side! 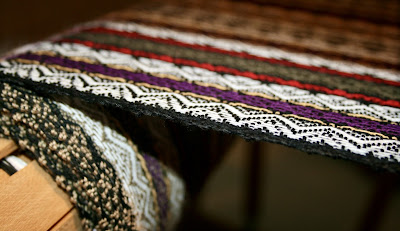 The rather satisfying cloth roll before it was taken off the loom. Shown here with black weft for samples 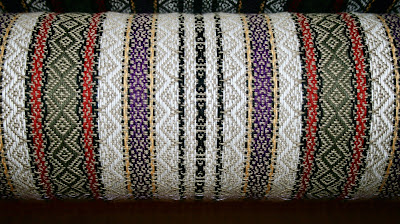 I had a small bit of warp left and I thought I would weave some using the same red as in the warp. The idea was to embellish card inserts and make some Christmas cards.  Add some beads and sparkly bits.   I hand washed this red section and the red bled like a murder scene!   The white is a permanent pink and I have no idea of what to do with it now.   I washed the towels with no less than 8 colour catchers and rinsed until the water was clear.   I'm happy I did the red cloth first and saw the issue ahead of time.     So if you buy Brassards cottons, test them out first to make sure they are dye-fast! 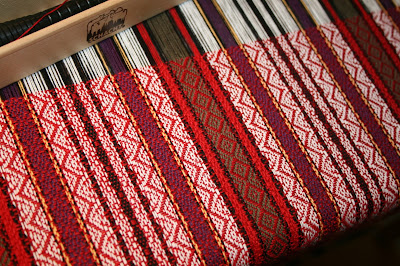 We are enjoying a moment in the sunshine here. Its all about to come to an end and by the weekend we'll be into a large storm coming in off the Pacific with very serious winds and rain. We have done extra tie downs on the patio furniture covers and feel extra snug after our house painting this summer. Hub even made room in the garage for the car! ☔️ 💦 💨 🍂
The budgies are doing just fine and all settled in. I call them the Happy Gang after an old time radio show from the CBC and ran from 1937-1959 and enjoyed two million listeners.
"The show was known for its "spontaneous humor, music, and corny jokes."
Well, that describes these four birds completely. You just never know what is coming next as they play.  We have jazzed up the cage with perches,  2 swings, and treats.   Two swings?   well, they all tried to get on the triangle swing and so we got a second one to keep the noise down as they fought over who got the prime seating. 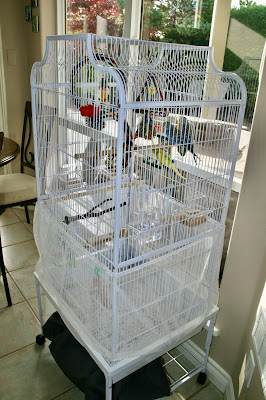 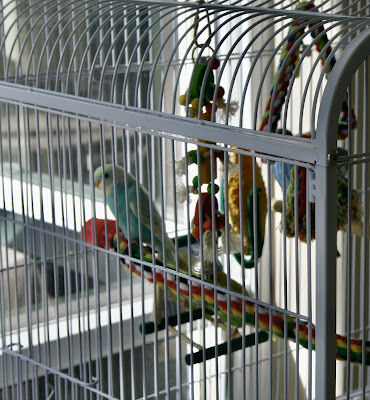 A big cage.... and only two little budgies?    So we brought home two more..... ( and that's it..... for now). Blue and Jay were squabbling. Well, Blue was being a persistent 'romeo' and Jay was not having any of it. We decided that there needed to be more to balance things out.  It was a gamble that so far has paid off. They are not fighting and Blue seems to be basically ignored by his harem.  In the wilds of Australia they fly in flocks of thousands! (Their natural wild colouring is green.)

So Blue and Jay now have roomies:  Kiwi and Teal.  So far, so good!  See if you can spot who is who.

The ride home with them was fabulous. Warm Fall day,  that gold sunshine of this time of year and we took the oceanside route.   Then we spotted a rainbow and pulled over to take this short video.  Excuse the road noise.... maybe watch with sound muted.   There's even some driftwood art.