In a Blink of an Eye

Things were ticking along.  Days getting longer, brighter and even warmer.... I was making plans,  winding future projects.  Finally getting my weaving groove back....

Then I was awakened at 1:30 am one night to find my Hubby in pain and before too long, called an ambulance for him.    That was the start of two to three weeks of  hospital ER visits, medical appointments and diagnostic testing and specialist appointments as he struggled to pass kidney stones.  The one currently trying to vacate is 8 millimetres  (that's this long: ------- ).   After a week something passed but tests show that both kidneys are full of large stones  and one is 2 centimetres! They want to get that one asap.   Then just over a week ago he woke to find he couldn't walk on his right foot and it was exceedingly painful.    Another week of rest and foot elevation before he could even get to the Dr and its gout.  It makes sense given his ability to make rocks.   There's a medicine for that and he's on the right side of that experience and now armed with glasses of water and a new diet.

Its a rather rough  start to the new year: a funeral and then all this...   We have been just dealing with things around here one day at a time.

So long story short, I have been nurse, cook, dishwasher, housekeeper, banker, laundress, and driver to appointments.  Not a lot of weaving going on and all of this was hardly anything you'd want an accounting of....   so no blogging for the past month.

All that being said, I do have some show and tell for you now..... 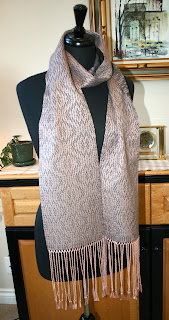 The warp is 20/2 silk in a lovely champagne colour from Treenway Silks. Its a pale pink at first appearance but then you notice a slight peach to it as well.  It was difficult to find a weft colour that didn't swamp the champagne but this slate grey 8/2 tencel from Webs has a soft way of picking out the pattern. The draft is a 12 shaft twill from Handweaving.net #55861and modified by me to allow for borders. 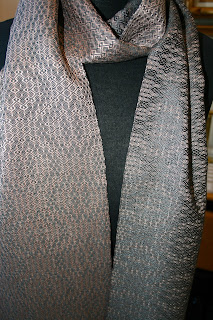 It has a definite front and back side and while much darker, its quite attractive as well. 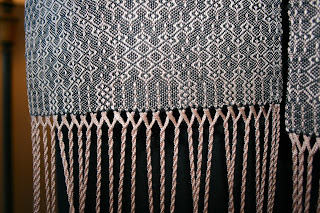 I knew that the scarves needed a little something extra and that possibly could have been beads.... but then the the zig zag of the pattern made me think of this fringe technique.  I think it goes quite nicely!

For the second scarf I auditioned a few weft colours but none of them seemed to work with out dominating the silk.    Then my helpful Hub dug around in the stash and suggested this olive green 8/2 tencel. 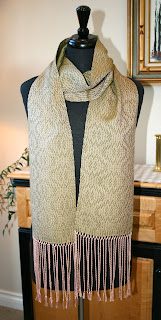 It seems to work well with the champagne  and is a fresh spring like scarf!  Being green, it does tend to bring out more of the peach tone of the silk.  Its quite the chameleon. 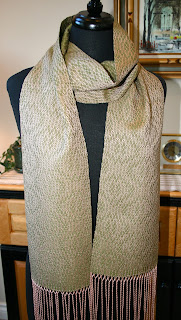 Again, there is a definite front and back side to the scarf. 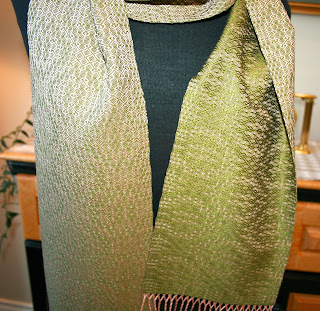 I also used the same fringe technique on this scarf too and it seems to get first notice before the pattern, the colours....    Amazing how something so simple can grab the eye! 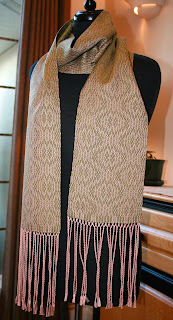 All yarns used came from my stash which was a nice treat.   I do have another warp just beamed and all yarns are also from the stash.   There's no danger of running out any time soon...  😊 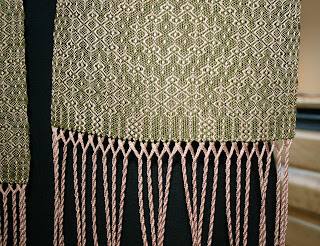 So its going to be a busy month ahead with ongoing medical stuff but the specialist is onto this and moving quickly.    Spring is definitely here and all the neighbours are out tidying up their yards, pruning and planting.  One neighbour has already mowed but its more of a move to clean the lawn than to cut the grass.    I'm drawing up a mental list of outdoor things to do like hose off the house and then clean windows.   Not just yet though......   first I'm going to see about throwing a shuttle for while. 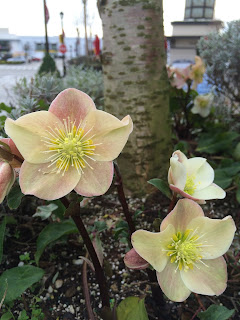 Hellebore that bloomed in early January (Victoria, BC)
Posted by Susan at 1:28 PM 2 comments: