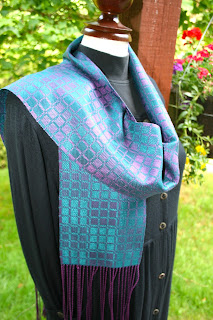 As promised, here's the second scarf from the grape silk warp. I think you can see now why I separated their debut's! Its dramatically different from the first scarf  (in the previous post). Definitely fraternal twins with a common warp, but the similarity ends there. 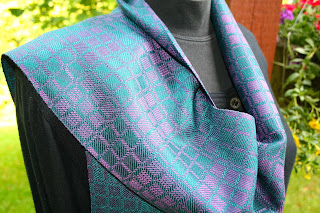 I had a hard time deciding whether I liked either scarf as I wove them as for a time I could catch glimpses of both and it really confused the eye.  I was committed to the weft colours and so soldiered on. 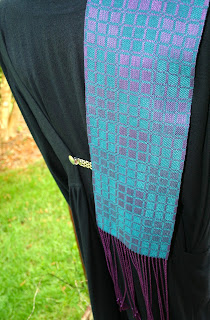 The change happened once they came off the loom and cut apart. I left one on my work table and set the other scarf down elsewhere to wait its turn for fringe twisting.  One scarf by itself was stunning.... as was the other.  But close together?   Not so much! 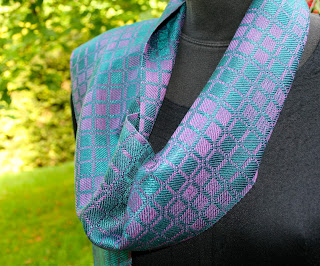 So here we have 20/2 bombyx silk which has been hand dyed a grapey purple and I purchased it from Jane Stafford Textiles earlier this year. The sett is 28 epi but I now feel 24 epi would be better next time round.   This weft is 8/2 tencel from Webs called deep teal. 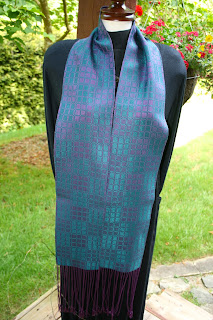 This picture shows the overall length before any twirls around the neck.  It was woven to approx seventy four / five inches and it wet finished out to seventy two plus fine fringe.  The width is six and a half inches. 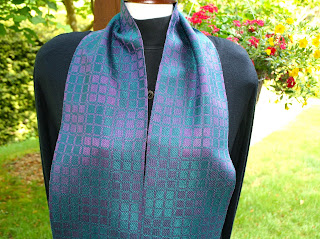 The is a natural shine or sheen to both fibres and together they just glow! They go that bit further and create an iridescent  effect like on a butterfly's wing. Both colours have similar depth of shade or intensity of colour.  A good pressing encourages the sheen and maximum refection.   Its magic! 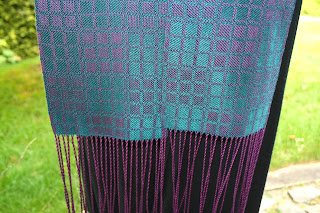 Another warp went on straight away and is progressing nicely.  Yet another old classic, by request, to be revealed next post.

We have had some special house guests for the past four or five days and had a wonderful time with them.  My daughter and her husband came from Colorado  and fly home out of Vancouver tomorrow.
We visited Goats on Roof in Coombs 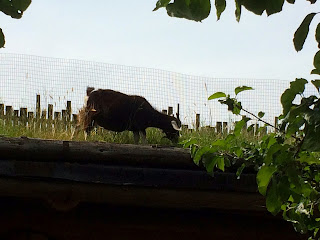 .....and then stopped and admired the gentle giants in Cathedral Grove.
There's a tree there that 20 people can stand and hold hands around the base. Its 1000 years old.  It was 300 years old when Columbus came to the New World in 1492.  Its a very humbling experience to stand among the trees and survey all the huge tree trunks surrounded by five- 6 foot giant ferns on the forest floor. The trees are so tall you can't view the entire tree if you look up.   Here's a brief video:

This is Colin, our son in law, and our daughter Carrie  along with Calli our Airedale, checking out the 1000 year old tree.  Colin is 6 foot 8 inches (no kidding!) for some perspective.... you can see where many people have climbed up on the fallen 'younger tree' and touched the old giant. 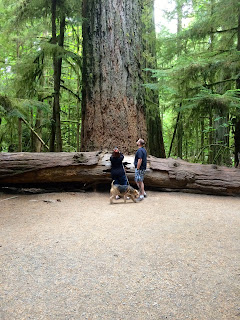 I'll leave you with some more wild wonders.... first, a tiny brown bat who has tucked himself into the crack of the garage door today.  We are very happy to see him and his friends on the property as they eat a ton of bugs!   White nose fungus has appeared to the south of us in Washington state, so hopefully this little fellow stays healthy. 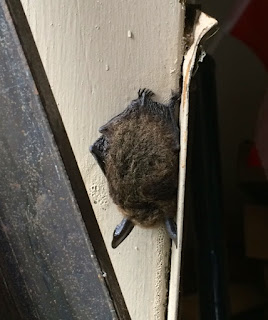 Then this is the view from my kitchen window this morning as I was hand washing dishes: 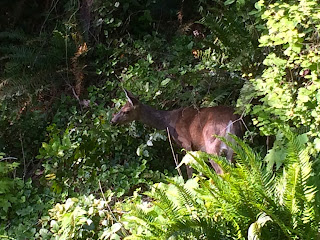 Her boyfriend came along about five minutes behind her.... he has little 'prongs' started, still in velvet.
Posted by Susan at 1:09 AM 4 comments: 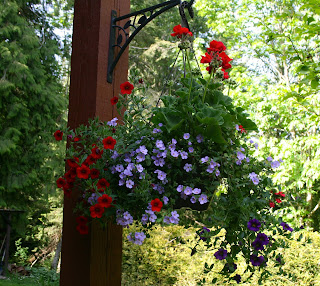 It seems the faster I try to go, the further  behind I get!   We have been continuing  to get things around the house tidied up for summer and have been busy doing odd jobs. Windows done (inside and out) deck railing and glass, some  gardening..... every day has been full.   We have decided to put our house and property on the market in the weeks ahead so we will continue to sort and down size.  That's the big decision hinted at in the last post.  We need a smaller yard and one level house on the main floor (at least). I have no doubt that there will be more joint surgery to come in the years ahead. I'd rather we change our situation voluntarily while we can and have choices,  rather than have it forced on us later.  ( I have watched and learned from my senior family members before me)

There is an additional air of pressure as we have two sets of company coming soon to visit!    The first arrive this Wednesday so I baked some goodies yesterday and grocery shopping is later today, with last minute cleaning Wednesday morning.  Phew! 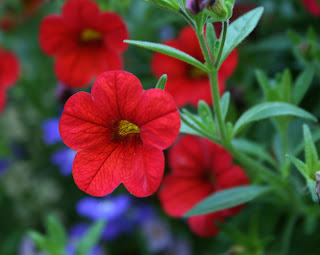 I'm so grateful that I have much more of my mobility back again to be able to do all this!   For the past few years I was leaning so much more on my hubby's help... and some days I couldn't do much at all. So now that I seem to have the worse of two surgeries behind me, it feels like I've reengaged with Life again!   Thanks for hanging in there Bruce! 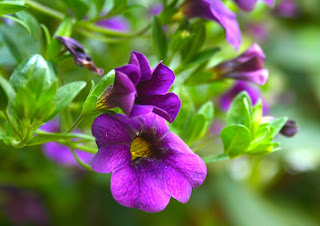 Don't you love this time of year with all the flowers bursting out everywhere?

There's been time for some weaving all well.  I wove off two scarves from this warp but they are so completely different, that I'm showing them to you one at a time. The second scarf will be another post.   So here's the first and I call it Juice Boxes.   The warp is a lovely rich grape colour (think grape juice! ). Its 20/2 silk and I set it at 28 epi but to be truthful, next time I would try 24 epi instead.  Its perfectly okay and has a lovely hand, but I'm are always looking for where improvements can be made. 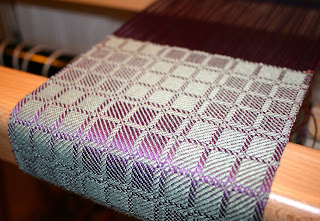 The weft is Bambu 12 which is quite fine. Its a mint green with just a touch of blue in its base and so it works with the grape quite nicely!  The pattern is an eight shaft Classic Drall ( #228 as found in The Weaver's Book of Eight Shaft Patterns).   Its a two block turned twill weave on eight shafts and a nifty weave.  There is something about the neat and tidy arrangement of boxes that appeals to the eye. Like stacked "juice boxes". 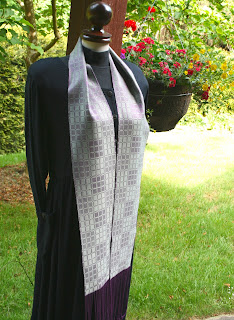 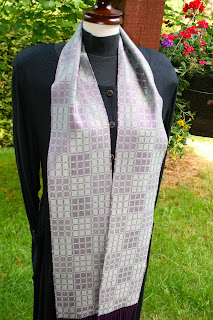 Then we can get to playing around with draping and going for flourish! 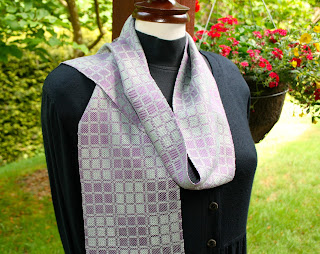 Classic Drall  is so versatile for either table linens, or for scarves.  I'm thinking it would be neat to try a three block version  on 12 shafts. I'm going to play around in Fiberworks and see how it could work visually. 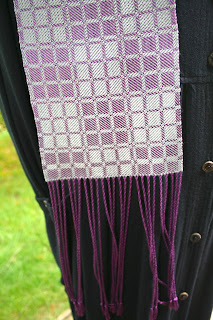 Here are two views of the scarf and full fringe and you can really see how deep the grape colour is. The hand is soft as you would expect for a silk and bamboo combination. The bamboo tightened up nicely with wet finishing and the steam pressing brought out the soft sheen of the silk. 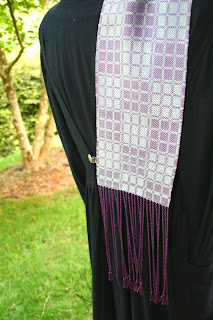 These  pretty girls gave it a round of applause! 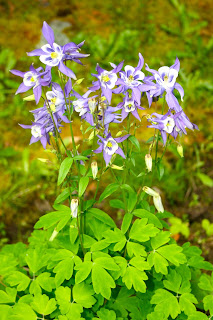 We went over to Vancouver for my son's 40th birthday this past weekend.  The year he was born, it was also Mother's Day.  I squeaked in under the wire at having him at 10:55 pm and then I asked where my flowers and card were?

Well, I thought it was funny at the time....

Anyhow we were over there visiting this weekend and had a party one evening, where I went dancing with my grandson to a live band (thank you Dr Jacks for fixing me!),  and a Mother's day brunch at their home the next.   My son and grandson Ethan made the yummiest, light as air waffles with strawberries and whipped cream.    And there was flowers and a card too.

Here they are pretending to be going very fast on the back deck on the Thomas bike: 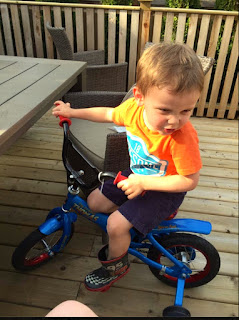 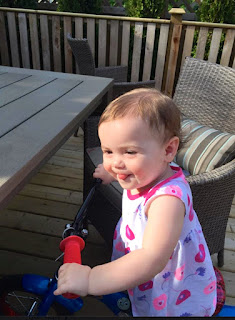 We had bought our grand daughter a pretty dress for her birthday in early March..... and she wore it Saturday night to the party. 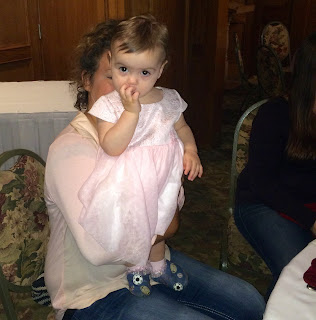 I think the term is " she has us wrapped around her little finger".