At first, managing colour and colour- pairings can be intimidating, then a challenge..... and eventually addicting!  You find yourself thinking "okay, this will look nice together" with some confidence.

So when I had an idea /concept come to me of shawls with old golds, bronzes, mossy greens and rich purples I ordered a custom painted warp in just these colours.    I'm simply not set up for dyeing my own warps any longer  and a lower back injury means the long standing as you work your way down a long warp just isn't something I can or want to do anymore. 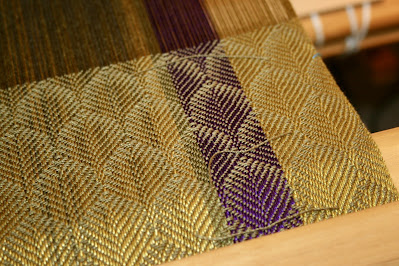 I placed an order with a wonderful dyer and what arrived came as a surprise.    All the rich tones I asked for.... and .... periwinkle blue.    😳   It looked so out of place and  I thought, well may be it will work.   So I beamed it and since this blue was right at the start, I could try weft colours out right away.    NOPE 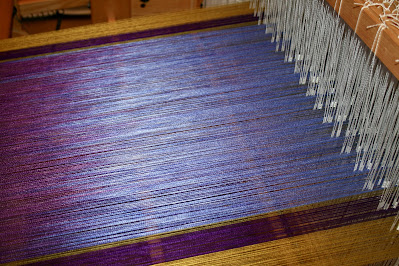 There were rather large patches of it, with runs of all the requested colours inbetween.  I did have a conversation with the dyer and there were apologies, financial adjustments made and  now it was up to me to make a mental adjustment  and work out what to do with this 8 yard warp.  (yes, I will and have ordered from them again.... with great results!)
I made table runners.... three of them.  Using this draft: F055 from the Thrilling Twills CD Collection by Ingrid Boesel. (also available on Handweaving.net # 79845) 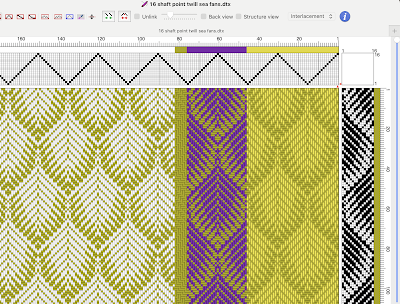 My first, safe choice weft, was amethyst  8/2 tencel. The blue undertones in the purple and the mossy green sure show at one end.  The pattern is clear and rich looking.
Since I was weaving blind so to speak, I decided to opt for short fringes opposed to full hems as I wanted as much runner as possible and I couldn't know how much 'okay' warp there was on the warp beam.  It meant a lot of hem stitching, and later fringe twisting, which I reckon took longer than the actual weaving! 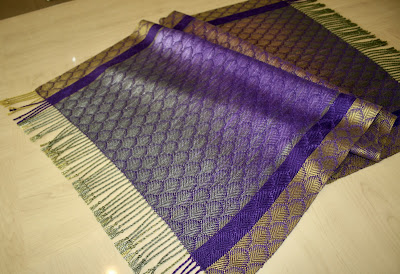 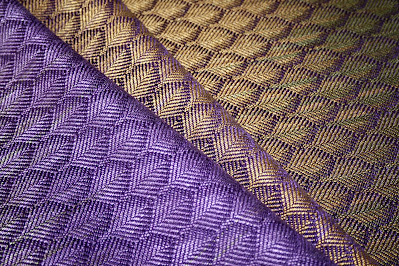 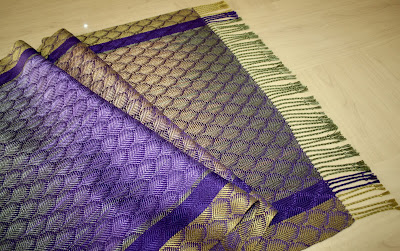 When I started to get tendrils of periwinkle blue appear at or near the beater, it was time to finish it off, and then advance the warp past the blue section until it was okay to start again.    Yes, this was such a waste of warp but as it stood, it was the best way to move forward and achieve something.
The second runner was a bit shorter:  21" by 36"  I shifted to a 10/2 cotton weft called Lizard Green (Webs Valley Yarn, now discontinued).  Cotton shrinks, tightens up more.   But I love the look of this one.... 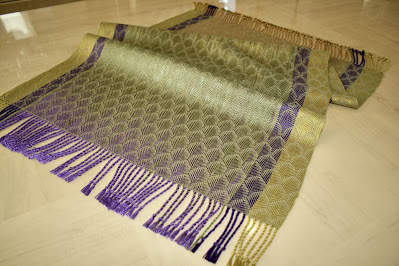 In this case, the blue transitioned into a softer purple and it looks wonderful as the fringe and start of this runner..... and the opposite end is a rich gold tone.   Its my favourite of the three! 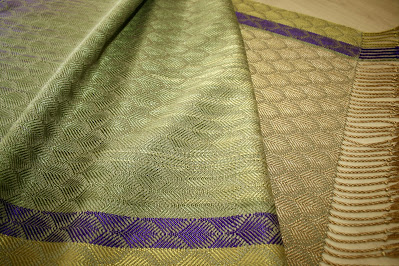 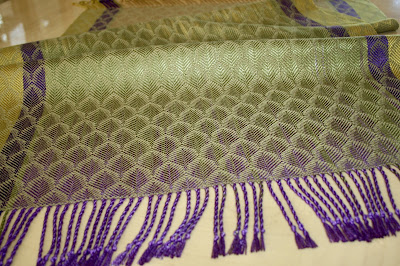 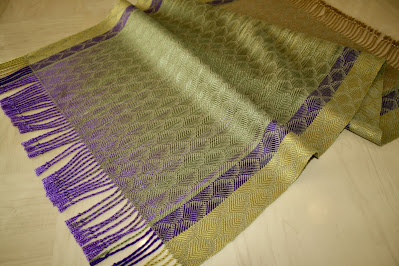 The final runner came in at 21" by 50" and had yet another surprise mid way.   It became a case of embracing yet another dye mistake and calling it just fine.   Otherwise I would only get two runners off this 8 yards.    Adapting on the fly.....again. 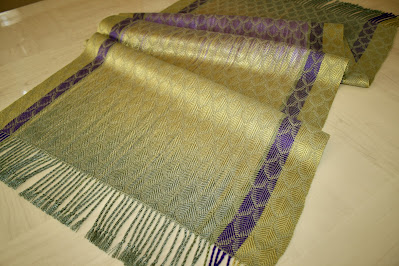 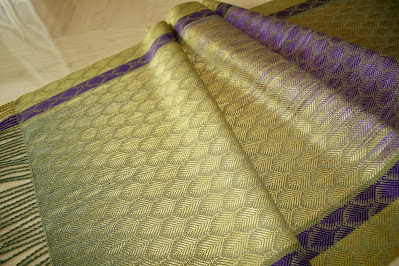 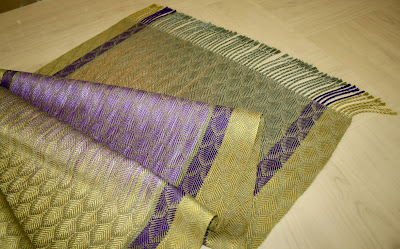 In the purple section, there appears to be lighter bits??    Yes they are there.... as undyed warp yarn showing as a very pale purple to white-ish. 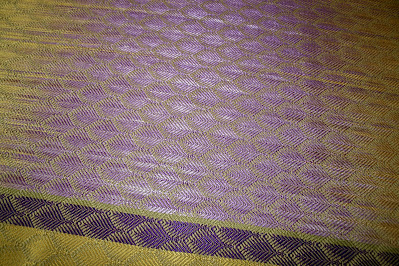 Here's a closer look.... now that its woven. Is it okay?   Yes.... and a few people have told me that it looks lovely and adds a nice variation to the cloth.
Okay .... it is what it is then.
As weavers we have a deep internal image of what we are hoping to achieve whether its pattern, colours,  or overall presentation.  We know every little thing that went right, and every little  thing that went wrong. Where all the mistakes were made, and what we would do differently next time.   In the mean time, the project, while not as planned or intended, is lovely and a success in it own right.
We can be our own worst critics and every weaver ends up having to manage their expectations.
Now that's the hard part!   😁  🍋
Posted by Susan at 1:03 PM 1 comment: