I must admit to playing favourites in my studio.  My 'go-to' loom has been the Spring. I like the way it involves all of me. Mind and body.  I can make choices on the fly and improvise.  The only drawback is the tie up which I have tried to improve for me physically by lifting up the loom and sitting on a stool to do the cords. With the loom only being 36 inches wide and light, it's not a big issue.

The Megado has no tie up per say.  The computer tells it what to lift and when.  Its very straight forward. The weaver simply treadles and throws the shuttle.  You watch the lines build into your chosen pattern and try to catch any irregularities within a pic or two.   All the thinking part is done when you are designing your draft. All the planning must be done in advance, or take time to revise away from the loom.

Its a very different mindset and one I felt uncomfortable with..... but I think that's all changed. I'm feeling the love now.

I had to get used to a different way of sitting and throwing. I also had to adjust to the fact that my left leg and knee are simply not strong enough to do its fair share of treadling so I have been building up strength slowly. The right leg does much of the work (for now).   Artificial joints don't move like a normal hip or knee and so you only gain 80-85% of your original mobility back. 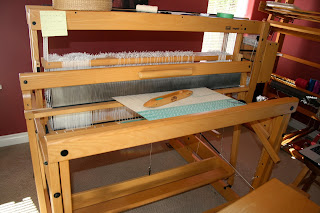 Some thing was off with the loom though..... it was cranky and out of sorts. I would have to tighten up nuts and bolts after each towel woven.   It shouldn't be like this.... 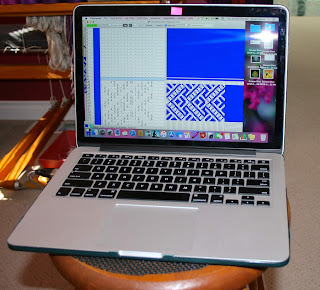 Here you can see what the screen I looks like when I'm weaving. This shows me at the end of a treadling repeat. I will reset the 'lag chain' again and carry on.  You can set it to endlessly loop and it will carry on, but I like to stop and change legs, wind another pirn and occasionally stretch. 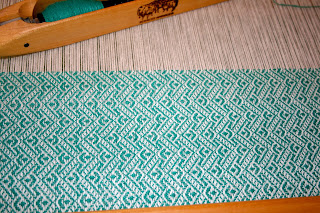 Here's what it looks like on the loom. Its not a pattern you'll find anywhere but one that came by happenstance. 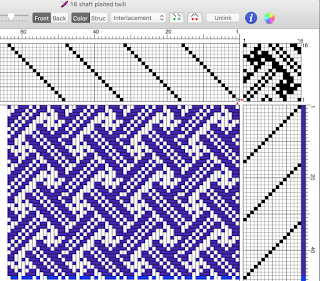 This is what I was originally weaving. A plaited or braided twill, but it wasn't very clearly defined. See the sample on the bottom in the picture below. 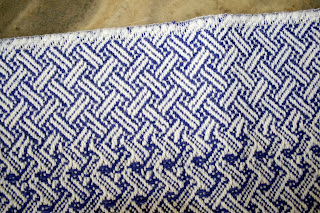 So I found another braided twill pattern and tried this one out: 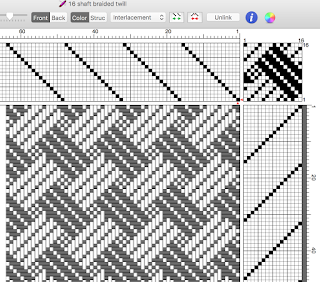 This is the one is shown as the top sample and as you can see, it makes a big difference.  I must admit that being able to change things on the fly like this is kind of nice!

Roll the clock well ahead and I finally came back to the loom to get things moving again.  I decided to make start fresh with a new draft  and so started playing in Fiberworks again. 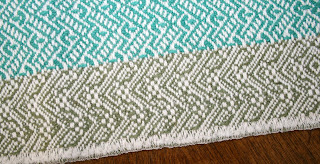 The green sample is one I tried and it was too muddled and so it went to the trash bin. Then I found this interesting pattern:

So I wove off 7 towels, using up some of my cottolin stash for weft.  The warp is 8/2 unmercerised cotton in a natural beige or bone colour.  Sett is 24 epi. 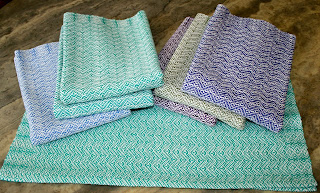 So six full sized towels, final measurements approximately 19 inches x 29 inches.  There is one shorter one that I'm calling a table square.

I wove to 34 inches on the loom, they relaxed to 33 inches and came out of the wash (before hemming) to 30 inches!   That's a lot of loss in the length. They also lost in width as well so its a good thing I make them large to begin with!   I did a very simple rolled hem and hand stitched.   A good press in the Singer steam press and they are finally done. 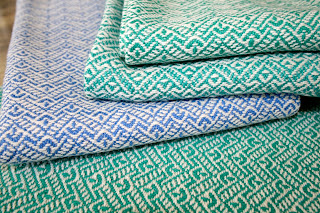 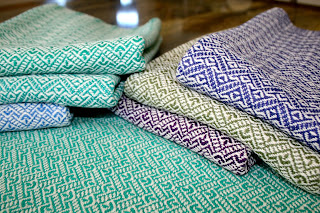 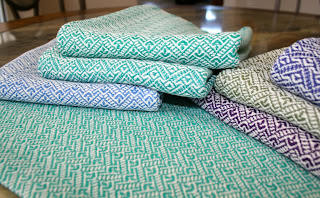 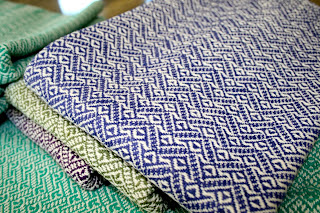 Thick and thirsty !   Two are being gifted right away 😊 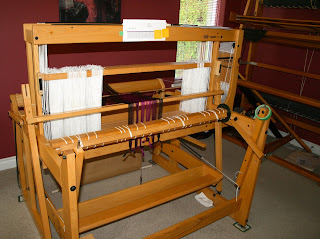 Meanwhile....I'm happy to say that the Megado is finally being reloaded with 6.5 yards of tencel for scarves.  I'll be sleying the reed this afternoon. We did a total rebuild of the back of the loom and shifted some carriage bolts that were in the wrong locations. Suddenly the loom is behaving and we will have a much better time of it from here on in! 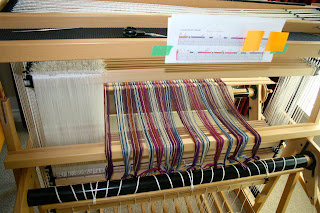 The Spring has an 8 yard cotton warp waiting to be threaded for another towel warp.   So who gets my attention now?   Its a coin toss every day now....  I admire their differences and love them both.

Irons in the Fire

I  like a clean orderly studio.  But its far from that right now... 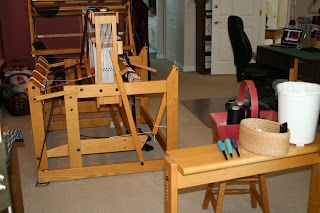 I simply have too much on the go and its difficult to know where to start or what to finish.   I finally got the second diamond shawl woven off.    I even wove off  seven or eight yards of towels on the Megado!  I struggled with the loom,  the brake, and found myself having to tighten nuts and bolts every half a towel or so. Something was off and I couldn't put my finger on the issue.  The rolled up raw cloth is sitting on the office shredder waiting for the desk to be clear so I can dig out the serger and secure the edges before wet finishing...

So with two looms coming empty I needed to start winding warps. I planned three or four actually and started winding. This meant the desk was being used for the warping mill and so the fringe twisting on the shawl had to wait.

Another day saw a parcel arrive from Leclerc and new inserted eye heddles arrived for the Tissart tapestry loom and I spent an afternoon finagling the parts off the loom, cleaning them up and installing the new heddles.  So that's done..... but I also have two new apron cloths waiting to go on that loom so I'm not entirely finished with the Tissart. Not to mention actually getting the loom set up with a warp yet...
Another day, another diversion. I enjoyed time spinning on the Rose wheel and working my way across a rainbow fleece. It must remain open and accessible so you can peel away the next section to spin, in order to get the rainbow effect. So that sits on top of the printer and the two wheels are by the door so I can take them outside.

I had a warp ready to be wound on to the Spring and another ready to go on the Megado.  Hubby came in yesterday morning to assist me and we got the longer eight yard cotton warp wound onto the Spring with no issues.  Love this little loom! 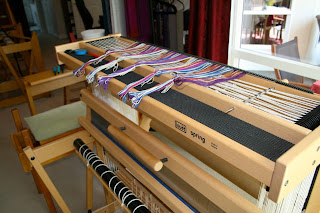 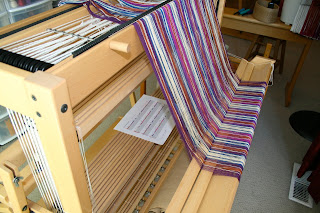 The Megado has a narrow warp of tencel waiting and I told him this won't take long..... and before we knew it  three hours had gone by and we were exhausted!  I casually mentioned the issue I was having with the loom and then he noticed some chaffing on the wood.  Long story short, it seems some carriage bolts were installed in the wrong locations and while the loom worked, it wasn't happy.  We identified the longer bolts and where they needed to go and thought we could take them out sequentially but its not that simple as we quickly discovered.

We end up removing the warp from the raddle, and then dismantling the back end of the loom, and then rebuilding it again.  It took some effort and patience but its all done now and fixed.  I even ended the day with the warp back being spread in the raddle again.    Most of the work needed to be done from floor level and finessing washers into tight spaces and lining up wooden parts, so it really needed both people working on the same page and cooperating.    We got it all done and stayed friends at the end of it all.
So I have been busy and some might think a bit too busy (me included!) but stuff is happening and moving along.... if slowly!  I just pick a task and see how far I get with it but I have two active looms, and a third  nearly so, which means I have more to choose from !

Oh yeah.... and its summer with other outdoor distractions too. 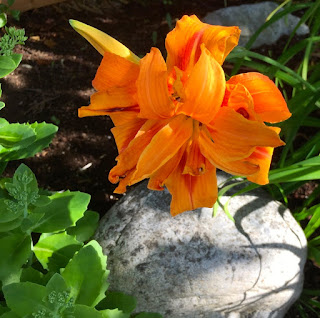 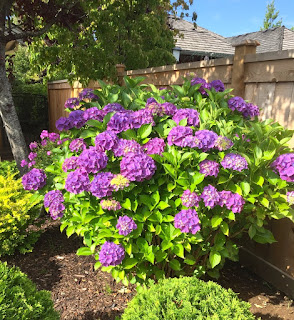 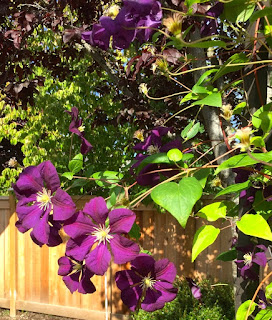