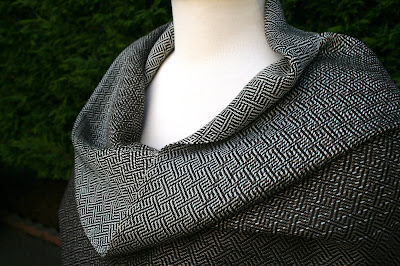 It didn't take long to finish the second shawl.  I have memorized the treadling and can do it in my sleep and so I shuttled on merrily !

This version is quite different, all because of the weft colour.   My first choice was to use the slate grey as I had used the opposite ecru on the first shawl, but it just didn't do anything visually satisfying at all. Too blah.

That left black as my weft yarn choice.  It gave the plaited twill much more definition across the entire warp, even the darker section.  It created more "colour and weave effect" and so there were some interesting colour chevrons where the warp colours alternated one for one.

Changes? Again, I would have taken out the farthest colour stripes in the transtion zones. I also would have added a shot of colour, such as a deep red at strategic point for some 'punch'.  That concept occurred to me much to late to do something about it .... this time. 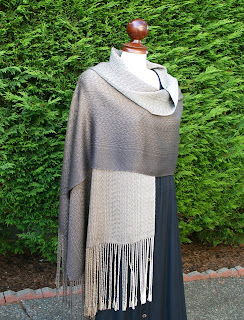 I hauled Madge outdoors again on what was to be our last full sunny day as fog banks have rolled in as the weather pattern undergoes a change. 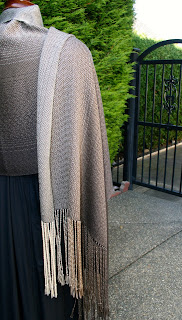 Its pretty in its own fashion and perhaps not for everyone. I have learned over the past 25 years of weaving that there is a buyer for everything out there. Someone who will just gasp, and have to have it! It may take time though.... 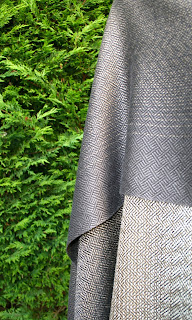 Don't you just love the drape? You can almost feel the silkiness through the screen .... 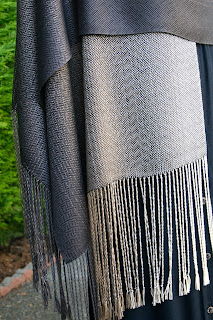 The opposing sides and colour play make for some nice eye play..... and.... 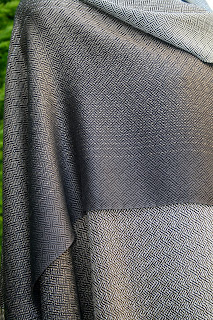 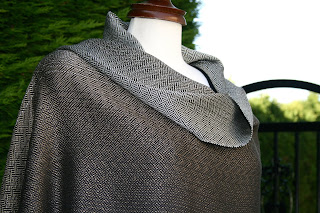 I have been playing with making a shawl neckline on Madge..... and I guess I should try it on a human soon. 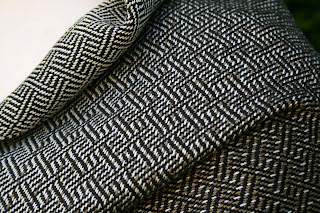 I'll repeat the draft here  from part 1...... but you really should go and see the first shawl if you are new to this blog 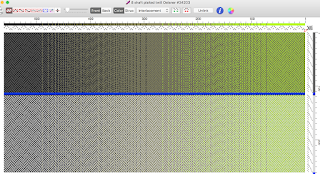 Changing topics..... here's our back yard taken a couple of days ago. We have had a marvellous run of nice weather. Sunny and warm by day and crisply cold at night.  I saw some meteor showers the other night with the clear night skies.   The leaves are changing but with no wind to speak of, the trees are (or were) clinging to them and looking picture perfect.   Today I can barely see the chestnut tree due to fog! 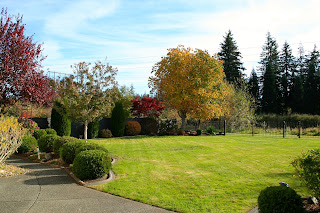 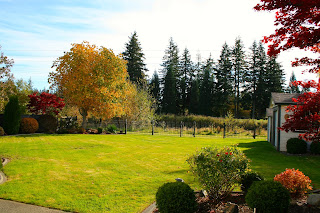 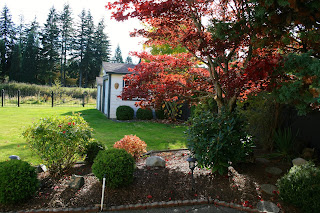 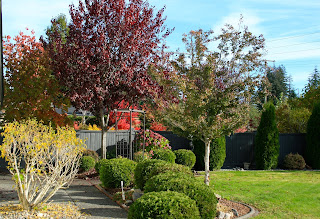 I have the house all to myself this week as Hubby is away visiting his Mum.  When your 95 year old mother says "come and see me"......  You go!  So my dream of having all kinds of free time to play in the studio is here and all I can feel is the empty house.    Its our 33rd wedding anniversary on Thursday and we're apart for it.   I think this relationship is maybe working out okay after all ! 🍾🌹

Posted by Susan Harvey at 2:46 PM No comments:

A Tale of Two Shawls: part 1 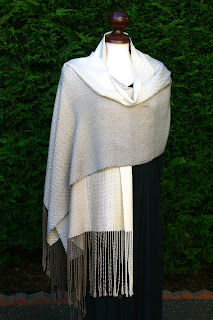 Sometimes I get ideas for weaving and make notes to myself.  Those notes usually get buried or discarded. One of them reappeared when I was searching through old samples from past projects. It was a plaited twill I had made tea towels from many, many years ago for an exchange. I had really liked the  symmetry to the pattern and wondered what it would be like in a colour gradation.  Going from one colour through to another on the other selvedge?  Geesh, that would take some work and then some....   So it was filed away. 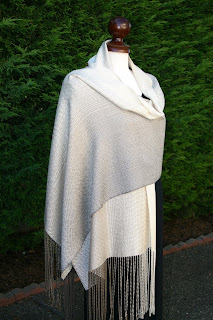 I found the note last spring and decided to play around with the draft on my computer to see if I could do it. Fiberworks (Mac version) has a colour gradation feature that I have used before with some success.  So choosing the colours (in tencel from Webs) ecru, taupe and shale, it turned out something like this: 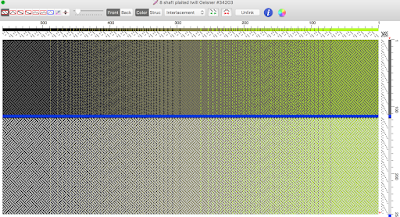 I used colours that would be easy to identify when winding the warp as I followed along, advancing my post it note.  The two sections represented two different weft choices, with the bottom being the ecru as weft. It showed the pattern is there on the cream edge but not visible unless you look closely and then as the colours shifts and changes, more and more is revealed until you get the full plaited twill on the darker edge. 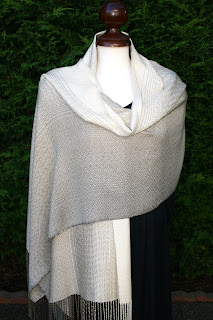 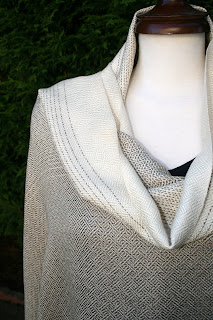 Then I started to have some issues with tension in places, so I opted to cut this shawl off and re-lace back on again.  It also meant I could see how things look when all opened out.  It took me some time to twist up the fringes and give it a good soak, dry and press up. 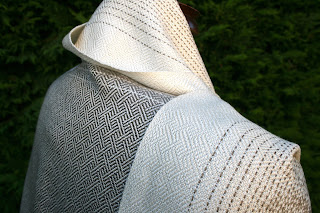 Then as luck would have it, we have been enjoying some beautiful sunny days and I took Madge out to the back yard for a photo shoot.  We found a spot out of the very bright sunlight and with a nice gentle breeze blowing, I got these shots. They give a very good representation of the colours as well. 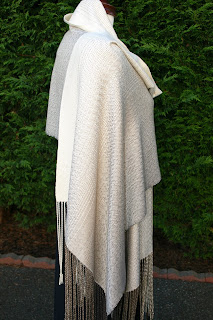 This was 8/2 tencel, sett 24 epi. On the loom it was 23.33" and was woven to 86"under tension. The over all length was 84" off tension 24 hours after coming off the loom and then the finished dimensions are 21" by 82".  I feel there was considerable  take up plus shrinkage all things.  I will be weaving the second shawl as equally long with this in mind! 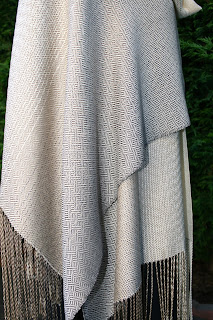 This picture shows the beautiful drape but also shows the transitions from ecru to taupe, then to shale. It also shows the pattern appearing broken and confused and then finally being firm and clear.  Sort of a metaphor for Life huh?  "...all will be revealed in time..." 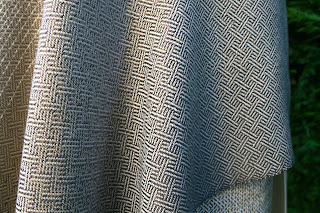 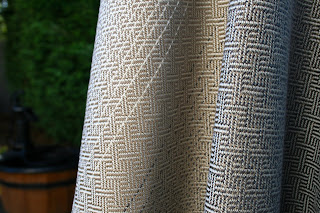 So I'm happy with the shawl but there are things I would do differently next time. I would take out the furthest change in colour threads so it was a tighter change.  I would also try for colours a bit closer in shade as well so it just flows across from light to dark.  Even the all ecru section is pretty! 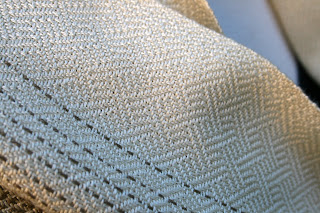 The second, darker shawl is off the loom now and waiting for the fringe twister, so part 2 will be along next post.

Next up....    my new warp weights. I bought them from  Carr Park Artisans on Etsy and I chose the cherry wood ones as shown below.    Such a simple, but effective concept!   My old plastic film canisters have been fine for years but are becoming brittle and cracking and my "stash" of them are slowly dwindling as the casualties are recycled. 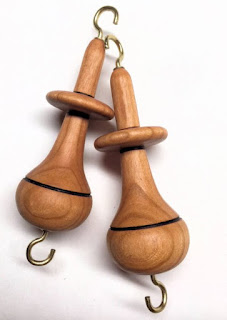 They come with five large washers as weights and it will hold more.  Your local hardware store has them.  I can just see a flood of weaverly women  asking for large washers at the nearest Home Depot or Lowes! 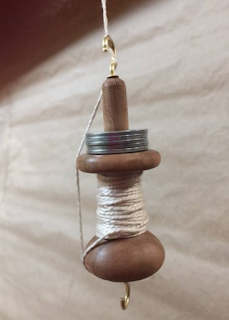